Saturday morning is the celesbian dodgeball game. The celesbians are led by Fortune Feimster (Chelsea Lately) and Bridget McManus (Cowgirl Up, McManusland) and are defeating the competition until they come up against a team of Dinah attendees that happens to be heavily composed of members of an actual dodgeball team from LA. The promise of mimosas is a large part of the reason we showed up for this. Shirin Papillon of One More Lesbian invites us to her room and it’s the first chance we get to really chat with the woman who invited us to take part in the Battle of the Lesbian Web Series, which is nice. We talk about not much of anything with a few other people including Nicole Pacent (Anyone But Me, I Hate Tommy Finch), Dalila Ali Rajah (Cherry Bomb, Grey’s Anatomy) and Alex Vega hair-twin Abisha Uhl (Girl/Girl Scene, Sick of Sarah). That thing happens where you’re like, “Ok, let’s leave after I finish this drink.” And then someone has just finished theirs and so they grab another one because lord forbid they have to not drink while you finish your drink and then goddamnit now I HAVE to get another drink while you finish yours and so on until someone gets pissed that it’s now been 30 minutes and everyone has a drink again and it’s for realz time to go so now everyone has to chug their drink because that’s the only way to fix the situation at this point. 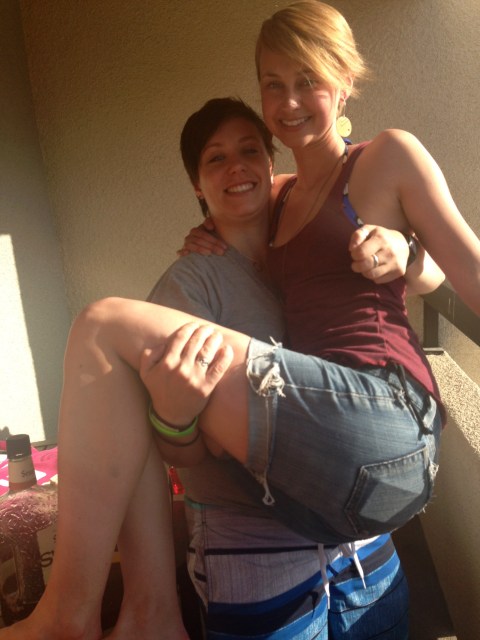 Having learned our lesson from yesterday, we decide to go to brunch at Palm Greens Cafe which is obviously a healthy place because it has the word green in it. Is there some kind of policy about that word? Or can I just open a fast food place, put green in the title, design it all super modern with a lot of greens and oranges and then watch as disappointed health enthusiasts enter and realize I’m serving up bacon cheeseburger realness? This place is like three Dinah miles away. It’s aight but Lauren and Liz really like it. 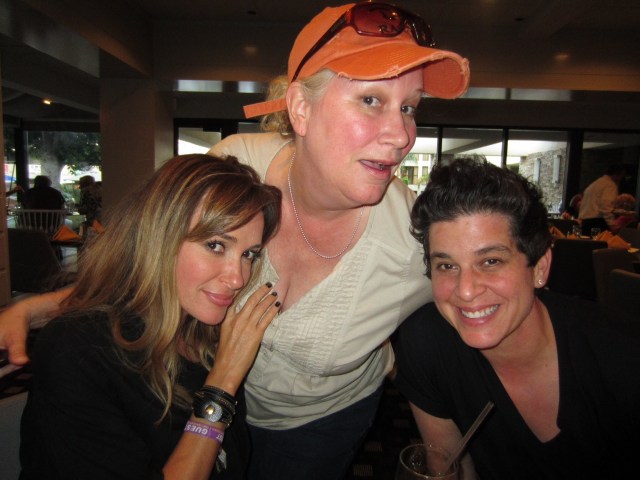 We head back to the pool party and hang out before our big event, Battle of the Lesbian Web Series. Julie Goldman and Brandy Howard were there promoting and shooting Gay Street Therapy and hosted the battle. They didn’t bring their super soaker which I was relieved about but they brought their usual antics and really livened up the “Dinah Says” event as much as humanly possible. The competition ended with lip syncing but it was really just dancing and gyrating. Here Unicorn Plan-It held a bit of an advantage since they enlisted Stacy Bratten, former Dinah dancer. They ended up taking home the trophy but I have to say that Words With Girls held our own in such a way that a member from the audience jumped on stage during Lauren’s performance so there’s that. 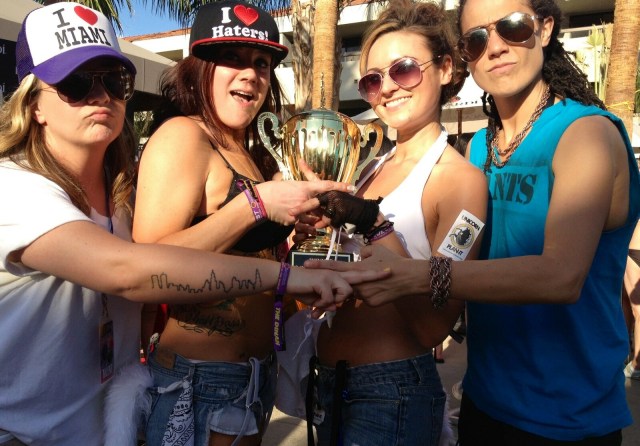 Fast forward past a lot of nothing to the Saturday night party at the Palm Springs Convention Center. Lauren and I decide to walk and the phone’s navigation flips out. With our creative route, it ends up being about four Dinah miles. We go to the VIP “cocktail” party which surprisingly lacked any and all cocktails or even tap water but did have a lot of cheese. We do another red carpet walk and answer a lot of random questions then check out the poker tournament that Brandy and Julie are hosting. It doesn’t sound like they’re harrassing anyone and everyone seems really focused on playing so I walk around the party for a bit then leave for Jess’s room where there is talk of going to the Ace Hotel which is way too many Dinah miles for me to even consider walking. I head home and go to sleep, deciding Sunday would be a big day. No commitments or responsibilities and my girlfriend promises me bacon in the morning. 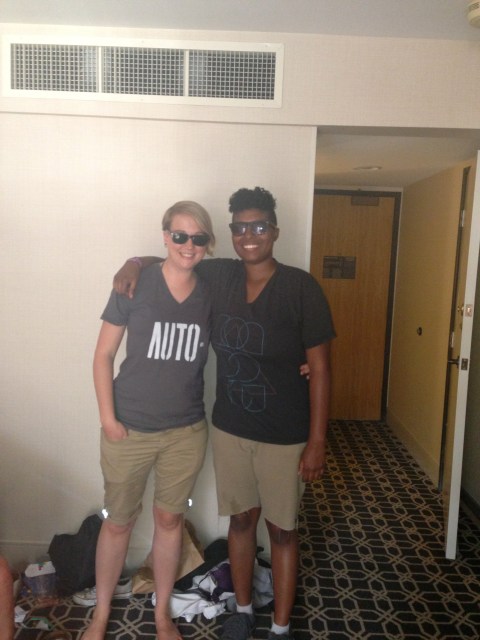 Post Sunday bacon, there’s a lot of hanging out in a Hilton room and watching the pool party from the shady balcony. A dozen or so people joined us WWGers including Cee and her friends. We sing and dance and even flood the hallway at one point. There are lots of “it’s a video, not a picture” moments and even a few goodbyes since most Los Angelinos were headed back that day. Since I wanted to see the Uh Huh Her concert that night and threatened anyone who tried to keep me from it with death, we just relaxed and enjoyed the last day with our friends and thousands of other women we didn’t know but who managed to do some pretty entertaining shit as they walked past the room. 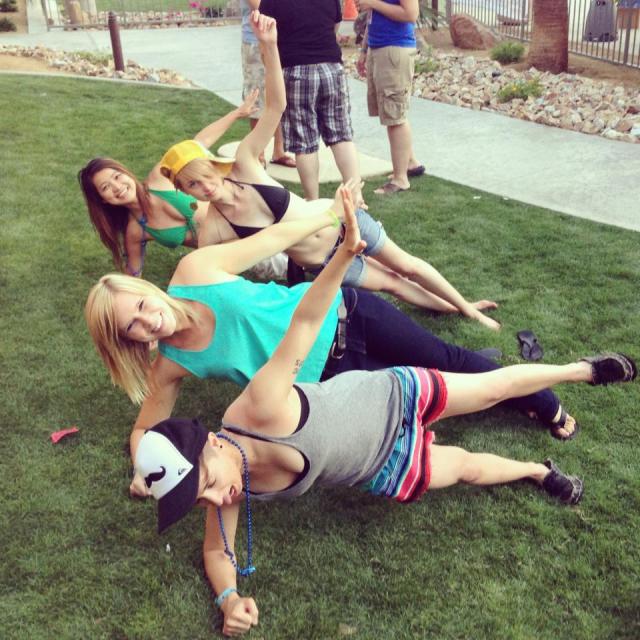 They said they would open the doors at 8pm for the Uh Huh Her concert which means me, Liz, and Lauren were lined up at 7:55. They didn’t go on until 9 and my feet already hurt but we were upfront and no one was pushing or doing annoying shit so I was happy. They played Explode, Human Nature, Wait Another Day, and some of their other popular songs along with some new stuff. They announced their new album would be more rock leaning while debuting their new songs. Leisha Hailey proceeded not to make eye contact with the crowd or speak any words but Camila Grey was ready with banter and playfulness. To be honest, the person with the most charisma wasn’t even singing. They have the Joe Biden of drummers. He looked genuinely happy to be there and his engagement with the crowd was only more evident next to Leisha’s stoicism.

That was the last big event. All that was left was to listen to Lauren and Liz order a bunch of weird food that night that doesn’t really go together, pack up in the morning, grab the Autostraddle banner, and leave. My number one regret was not keeping count of how many people asked Lauren’s nationality or race and/or if she was straight. The answer, of course, is too many. 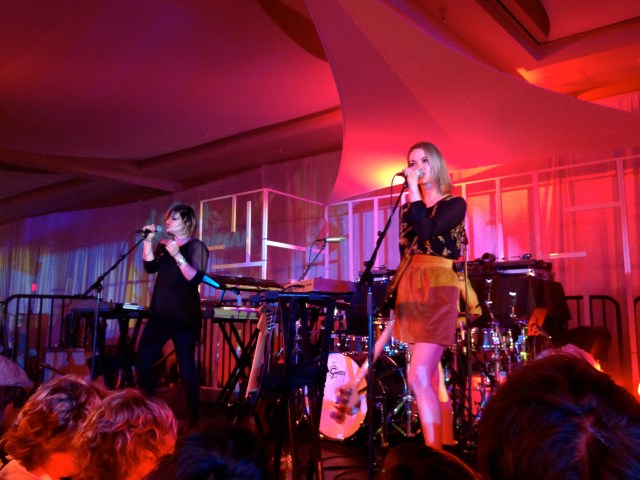 To sum it all up, these are the most important lessons I have to impart from the past two years:

1.) Eat at least two real meals a day and drink more water than you think you need. This seems like common sense but it’s easy to get swept up in everything that’s happening and your own laziness. After one night of sleep at home, I was back to my usual self and not the sick zombie that I was for like three days last year.
2.) Don’t cross into the half of the pool party closest to the stage unless it’s during a performance you really want to see. You must never go there, Simba.
3.) Shower whenever you feel like it because when the time comes that you actually need to shower, you won’t feel like it.
4.) Map it. Just because everyone is hopping in a cab, doesn’t mean you need to. In your head, mileage might be different than any other time of the year but taxis still cost the same amount. A fifteen minute walk is not worth six bucks, even if it is three Dinah miles.
5.) You know those people that are always surrounded by others but none of those people ever look happy to see them or be around them? They are, in fact, wack, no matter how many people try to convince you otherwise.

Peace be with you, God’s speed, namaste, etc.