This morning I — Hi, this is Heather — woke up to a message in the Autostraddle TV Team Slack channel from Natalie that said, “The Tegan-Annalise Watch is officially over.” By which I thought she meant Tegan and Annalise hooked up on How to Get Away With Murder last night. And my heart sped up a little bit and I was like, “Finally.” But then I kept scrolling down and saw not one, not two, but three screencaps of Eve Rothlo and I leapt out of bed like my head was on fire to get to my DVR. It’s the first time in my life I have ever wished for an Echo. “ALEXA PLAY THE MOST IMPORTANT THING ON TELEVISION!”

Some other cool things happened this week: Toni and Cheryl scissored on a pile of money they stole from rich people, the way the good Lord intended. We did a roundtable about the history and highs and lows of lesbian sex on TV. Rachel read every single one of you on the subject of Gillian Anderson. Natalie started recapping Good Trouble! Kayla reviewed Sex Education, which she loved! The #10YearChallenge celebrated Sara Ramirez’s glow-up. And Valerie celebrated Critical Role!

Here’s what else, including the most important thing, which, as I have stated, is ANNALISE AND EVE.

How to Get Away With Murder 109: “He Betrayed Us Both”

So, I’ve got to be honest, dear Reader: I wasn’t really paying attention to most of How to Get Away With Murder last night. In my defense, I knew the episode was going to be centered around Gabriel Maddox and Sam Keating…well…

#NotAllMen, but these particular men? TRASH.

I just wasn’t invested in the revelations about Sam’s offspring or even the fallout from Matt McNamara Ronald Miller’s murder so I wasn’t giving HTGAWM my full attention. As a result, when this popped up on the screen, I totally missed it: 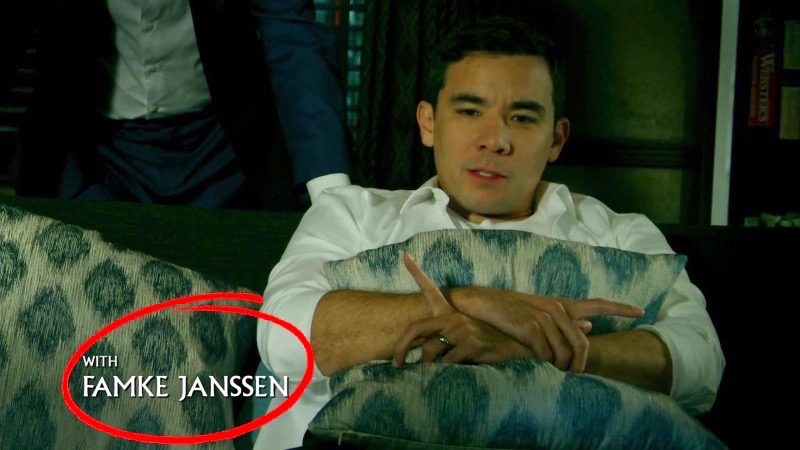 In my defense, if I had seen it, I probably would’ve brushed it off — this was going to be a flashback heavy episode so, of course, we’d see Eve again — but, also, if I had seen it, perhaps I wouldn’t have gasped when Eve Rothlo appeared on my screen. 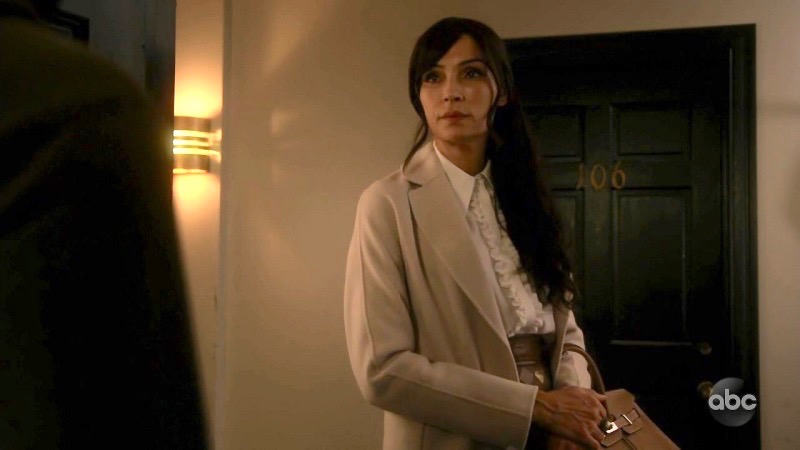 The ghost of Eve Rothlo, past.

All the O-M-F-G moments over five seasons of this damn show until now and the one and only time I’ve ever been genuinely startled is when Eve showed up on my screen for the first time in 826 days. And that moment was great. I have such a profound connection to this couple. Seeing Eve re-emerge in Annalise’s narrative, even for a minute, to give the woman she loves the life she said she wanted, even if it’s at her expense, made my heart sing.

But then this happened…. 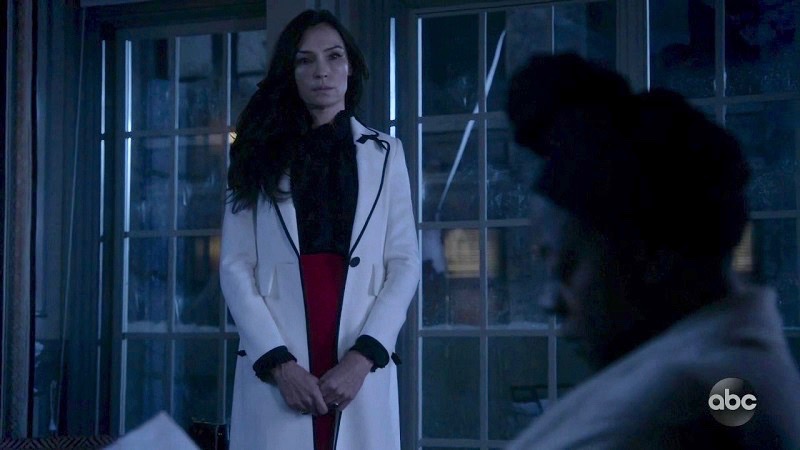 MY SHIP IS SAILING.

And I screamed. Out loud. At my TV.

Eve’s there. In Philadelphia. In the present. Wearing nothing that resembles an engagement/wedding ring (#SorryNotSorry, Vanessa from California).

“He never deserved you Annalise,” she says.

And, then, in an instant, after weeks of hoping for an Annalise and Tegan hook-up, my heart turns. 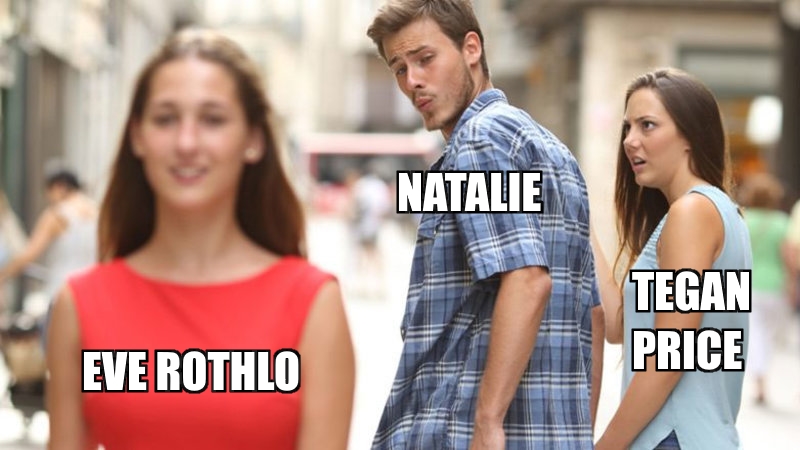 Last time on All American, Coop and Shawn are on the phone, celebrating his escape from gang life, when a rival guns Shawn down outside his building. Patience hoped the tragedy would be enough to tear her girlfriend away from the violence but ultimately, it seemed to only pull Coop further in. 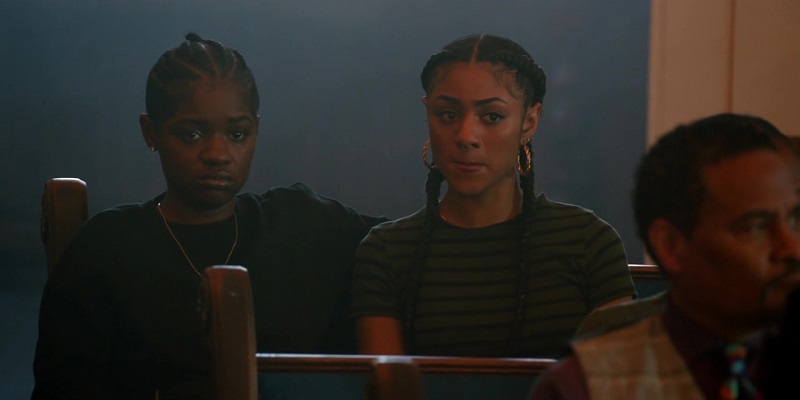 The midseason premiere picks up soon thereafter: the neighborhood’s gathered to mourn Shawn and all those they’ve lost to gun violence. The pastor wonders who they’ll mourn next and, for a brief moment, casts his attention towards Coop; she doesn’t flinch but Patience shifts uncomfortably in her seat. Back at the apartment, Patience worries that Coop’s name will be the next one they read out in church and Coop assures her that she’ll be fine. Patience urges Coop to walk away from the gang but she refuses: if roles were reversed and something had happened to her, she knows Shawn wouldn’t have walked away.

“No, he would be doing exactly what you’re doing right now, and that’s why his name was read in church today,” Patience points out. Unable to make any headway with her girlfriend, Patience reaches out to Spencer for help. The news is disconcerting enough for Spencer that he blows off an important scrimmage and an interview with a local reporter to head back to Crenshaw to save his best friend from making a life-altering mistake.

Meanwhile, Coop’s growing impatient with Tyrone and the crew: they know who killed Shawn but still haven’t gotten retribution for his murder. Tyrone tells her to fall back but he likes seeing this fight in Coop. Before things can get too deep, Spencer interrupts and confronts Coop about her behavior. He’s carrying around a lot of guilt about Shawn’s death — he should’ve done more to keep Shawn off the criminal path — and he refuses to repeat that mistake with Coop. 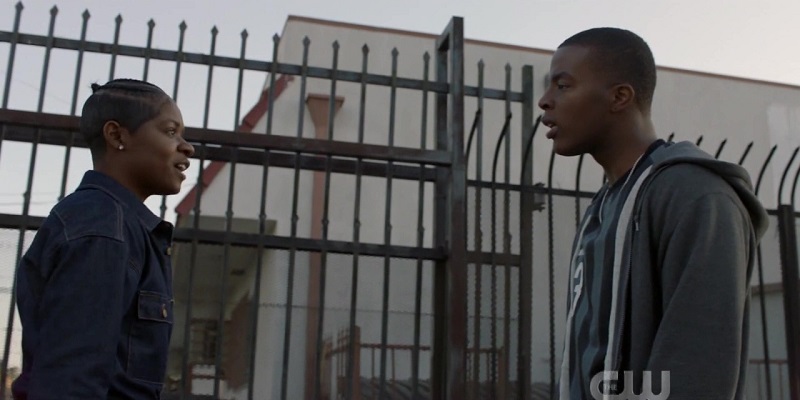 “You’re not built for this life, Coop, and that don’t mean you weak, all right? It means you strong,” he tells her. It’s not clear that she buys into what Spence is selling until Tyrone offers Coop Shawn’s old spot. She declines the offer, pledging to let her quest for vengeance go, and Tyrone begrudgingly accepts her refusal.

Later, Coop goes hunting for Ray, the guy who shot Shawn. When she finds him, she promises that no retribution will be coming his way. She notices that he’s carrying Shawn’s bag — the same one he gave to Tyrone to buy his way out of the gang — and begins questioning everything. Ray urges her to stop asking so many questions or she might get herself killed. But even without asking the questions aloud, Coop realizes what really happened to Shawn. 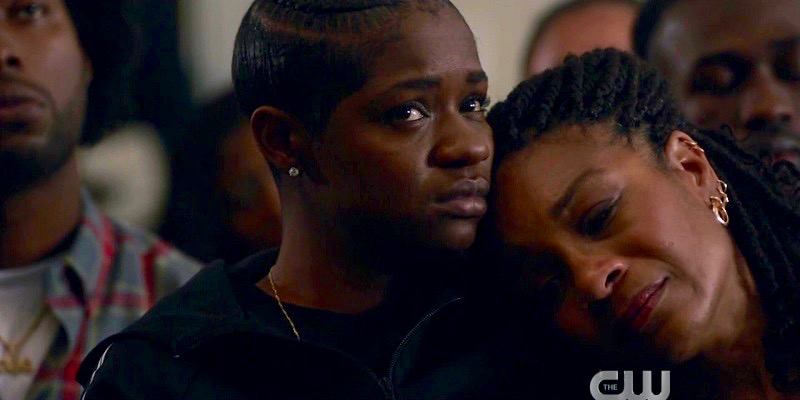 Instead of going to the police or going back to talk to a lawyer or taking Patience and getting as far away from this mess as humanly possible, Coop heads to the church for Shawn’s memorial service and tells Tyrone she’s reconsidered. She’s too late, though, Tyrone’s given the spot to someone else. Coop pauses her quest for the moment, to comfort Shawn’s mother and take in Patience’s rendition of River, but she is undeterred. Later Coop meets up with Tyrone and his crew and asks again to be let inside his circle…this time, Tyrone acquiesces, only first she must be jumped in. Coop agrees and two members appear and pummel her, while the man who ordered the hit on Shawn looks on. 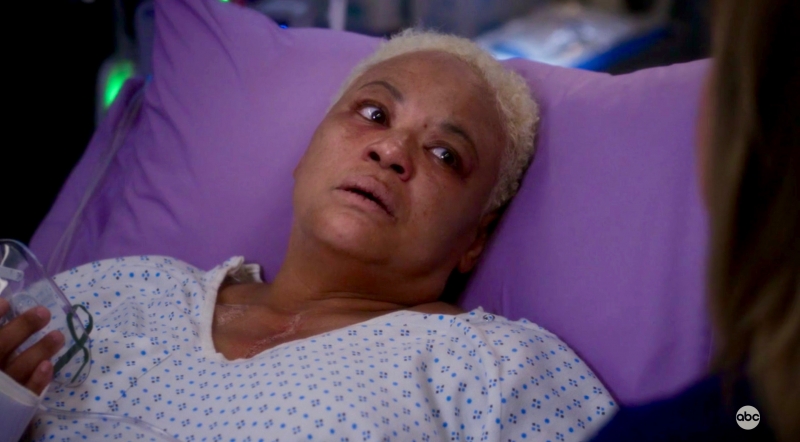 RIP Cece. You deserved so much better.

Greys killed a gay. She was black. Her only purpose was to fix the lives of the straight and/or white people around her. That wouldn’t have ever happened under Shonda’s watch. Hellmouth mourned her. Turns out that in addition to already being the show’s comedic strength, she has real dramatic chops. Maybe give her a girlfriend so we can see more of her. End scene.

In all seriousness, as Riese noted in Autostraddle’s 2018 television report, while there are fewer queer women dying on television overall, the few who are still dying are overwhelmingly black. It’s heartbreaking to me personally to see Grey’s Anatomy continuing that trend. — Carmen 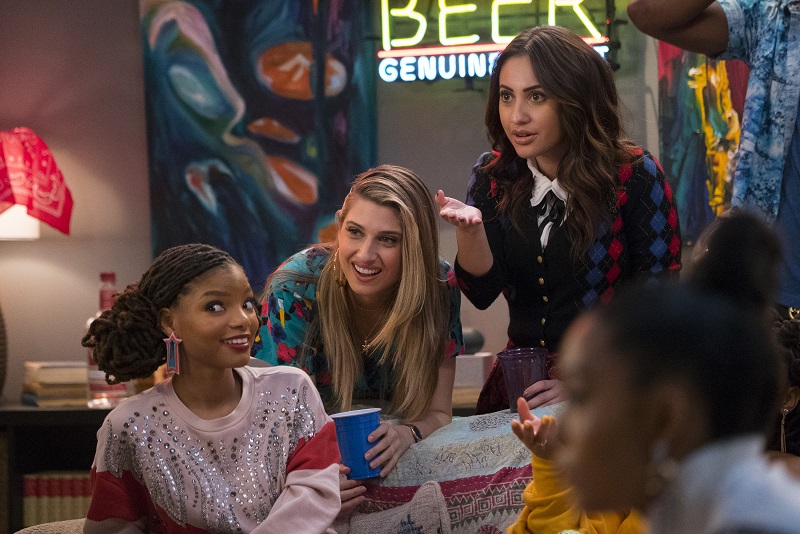 Nomi didn’t figure heavily in this week’s episode of grown-ish but I did want to note this episode for a couple of reasons: first, it tapped into an interesting conversation about “genius” – what it means, who earns the label (dudes) and who doesn’t (women), etc. – and second, it debuted an amazing video from the identity-concealing rapper (and genius), Leikeli47, which featured an extended cameo from Samira Wiley.

Don’t forget to set your DVR for next week’s Nomi-centric episode, where we’ll get to meet her new Gender Studies professor and lesbian svengali, Shane McCutcheon. — Natalie

For months now, Sophie’s been relentless in pursuit of justice for her mom, even as everyone else expressed their doubts and even as her own personal life languished in the process. But this week, her machinations finally paid off, as Duncan, the real culprit, issued a full confession and Sally’s released from prison, pending appeal. The instant things finally look settled though, Sophie recognizes what she’s lost, including her relationship with Paula. When she and Tim meet with the solicitor to talk about Sally’s impending release, there’s a moment where Sophie looks like she wants to talk about their personal relationship but Paula rushes off.

Meanwhile, the Cobbles’ other lesbian couple, Kate and Rana, are much better off. Rana met up with Zeedan this week to dissolve their nikah…a necessary, but bittersweet, step before she can marry Kate. Their celebration is marred by Kate’s father’s upcoming court case. Rana tells Kate she doesn’t mind postponing their wedding until things are resolved with her dad. — Natalie 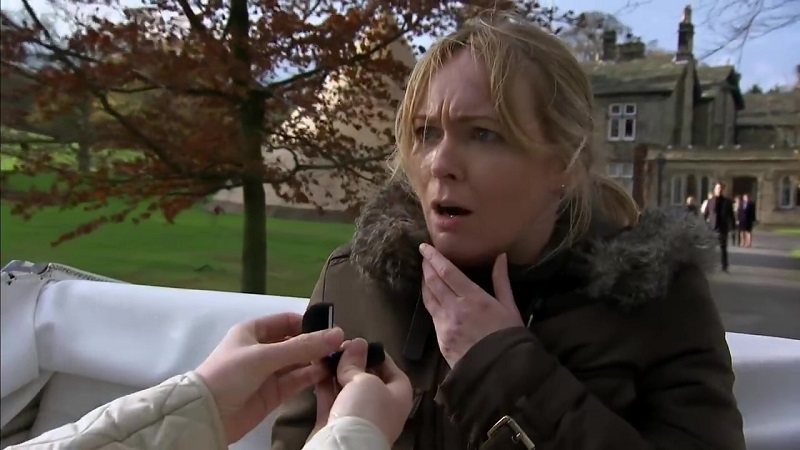 I don’t write about Emmerdale nearly enough…which is a shame because, among the genre, it’s doing the best job with its lesbian relationship. For a show that’s on almost daily to be able to tell this love story between these two women, Charity and Vanessa, and not descend into god awful tropes; it’s truly unprecedented in my experience.

Last week, Donny Cairn, furious at Charity’s cousin for having gotten his son locked up, attempted to set the pub on fire with Charity and her entire family inside. Vanessa happens upon him, as he’s pouring the gas, and fights to stop him, only to get stabbed in the process. Donny sets the pub ablaze and escapes in Vanessa’s car, which still has her young son still strapped in the backseat. She calls Charity for help and her girlfriend finds her, collapsed outside. Vanessa begs Charity to leave her and go find her son which she does, begrudgingly. It all works out — Charity tracks down Donny, subdues him, and rescue’s Vanessa’s son and, after a brief scare, Vanessa recovers from her injuries — but it’s enough to make Charity realize that she cannot go another day without telling Vanessa what she means to her.

Once Charity finds the perfect ring, she struggles to think of the perfect proposal. She wants to give Vanessa the world but when she can’t think of a setting perfect enough for Vanessa, Charity just steals someone else’s. It’s hilarious, ultimately, heartwarming and absolutely perfect. I loved it all so, so much. — Natalie

I’m starting to think they had that brief flash of Nora being into girls in that one episode to shut me up, specifically. They haven’t mentioned it since, no more hints that Nora is queer. There was a new baddie introduced in this episode though, Silver Ghost, and while there’s no definitive sign she’s queer, she made me feel extra gay, so. There’s that. — Valerie Anne

I thought I might like Travelers because it seemed like it might have a little bit of a Quantum Leap vibe, and that was my favorite show when I was a little kid. It kinda does but the show’s pretty mediocre sci-fi. I heard the word there were some gays in season three, which landed on Netflix a few weeks ago, and there are, but they’re also mediocre. One new character, Joanne Yates, is a lesbian, which is explored only as far as her saying “same here” when her partner says he’s having wife problems. In the final episode, the guest characters are a couple named Samantha and Amanda. They almost kill two billion people by destroying the ozone with a new invention, but a traveler jumps into their body and stops it from happening. In my opinion, here’s a better use of your time. — Heather

The TV has written 118 articles for us.