It’s a holiday week here in the United States of America, so there’s not much happening on the teevee. Luckily, I’ve saved up my feelings about How to Get Away With Murder; we’ve got plenty to discuss there! I’m also almost finished with a standalone piece about Princess Bubblegum and Marceline’s trajectories on this season of Adventure Time. Maybe I’ll have it done for you by tomorrow! They’re making my heart boom-boom more than ever! Until then… 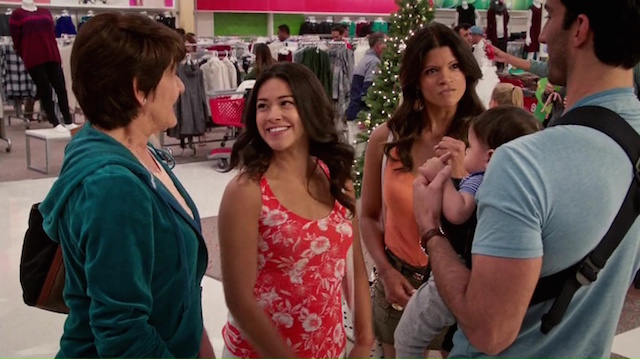 It’s almost mid season finale time on Jane the Virgin, which means even more zigs and zags and reverse-zigs and triple-double-backflip-zags than normal are surely on the way — but first, a Target commercial! I’m not gonna complain too much; product placement is a way of life now and it’s not like I sit through commercials and should therefore be exempt from watching commercials inside my shows. Holy moly, though, this week the entire Villanueva family and Rafael and Michael go into a literal Target store and walk around in slow motion and hang out in the Christmas decorations section to talk about their love business. It’s a lot. Jamal Lyon’s over there at the snack bar encouraging you to have a Pepsi.

It’s a pretty slow week by JtV‘s normal standard: Jane and Rafael finally go on that date, after Jane screens a hundred thousand babysitters; Jane chooses an MFA adviser and surprisingly it’s her professor who’s an asshole but who also inevitably is going to be her love interest; Xo writes a song for Rogelio’s new TV show but ends up selling it to Rogelio’s nemesis; Michael goes to Nadine’s funeral and reveals that he’s actually been working undercover since we saw him get fired; Petra and her mom completely Weekend At Bernie’s Milos’ henchman that Magda hooked to death, a thing that causes her to self-sabotage her new friendship with Jane; and, mercifully, Jane’s new grad school BFF publishes his expose on the Solano family, so that storyline won’t drag on. 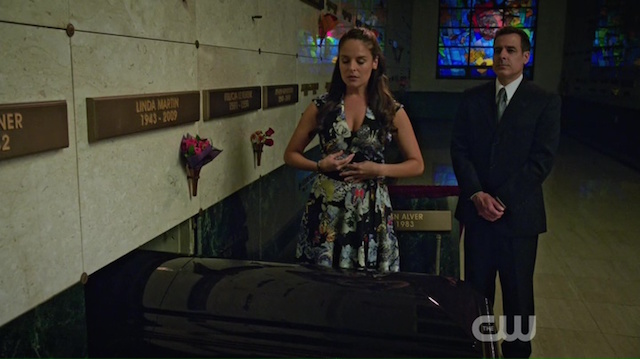 Maybe she was holding her breath and an elderly witch from Ravenswood pulled her from her grave.

The main takeaway from the expose is that Luisa’s mother is probably still alive and also is the crime lord Mutter. If you’re keeping score at home, that’s two of Luisa’s mother figures who turned out to be criminal masterminds, one of whom was also her lover. A Sin Rostro vs. Mutter showdown at the end of the season might honestly drive Luisa to her ashram, never to return to Miami. I hope not! In the meantime, I expect to see a lot more of her in the back half of the season.

I might not be Luna, but I still know how to love good.

Okay, kittens, put on your murder mittens, it’s time to talk about what the actual fuck is happening on HTGAWM. I feel like a lot of you read this column to keep up with queer characters on shows you don’t actually watch, and if that’s the case here, I am inadequate to the task of explaining it to you. HTGAWM isn’t really linear storytelling; it’s a lot of flashforwards and flashbacks to every main character constantly doing murder and getting murdered, and this season we’re building toward answering the mystery of Who Shot Annalise? See, because a lot of the flashforwards involve her writhing around on the ground and bleeding from her gut. We do find that out, we do, in the midseason finale, but hang on before I tell you.

You remember Eve, right? She and Annalise were gal pals and then Annalise married her terrible husband and then she had him murdered (and got away with it) and then Eve came back to town making love eyes and doing lawyer talk and defending Annalise’s kinda-boyfriend, Nate, and then having mad excellent TV sex with Annalise and then inviting her to move to New York and live with her and scissor and do lawyering together. Annalise declined, and so Eve bounced. Well! But Annalise bebops on up to NYC a few episodes later to ask Eve to come back to D.C. to defend Nate, and Annalise says yes (because Annalise has more charm than any Slytherin you’ve ever seen or heard of in your entire life and everyone says yes to her whims). Eve gets Nate out of trouble, la la who cares, but the main thing is that Eve meets Wes, okay, and no one really knows what Annalise’s deal is with Wes, but it’s weird as butt. Like is she his mom? Does she want to bone him? Seriously, what’s the deal? 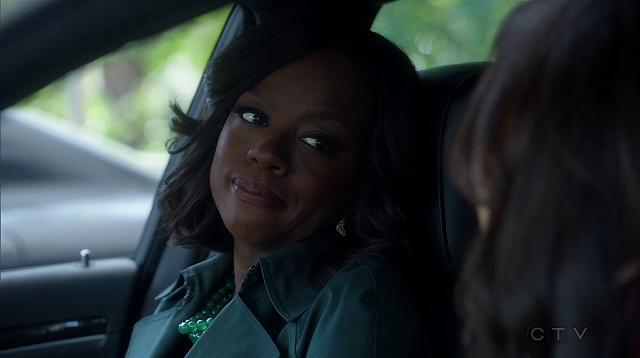 If I found the Room of Requirement, you’d be the only thing in it. 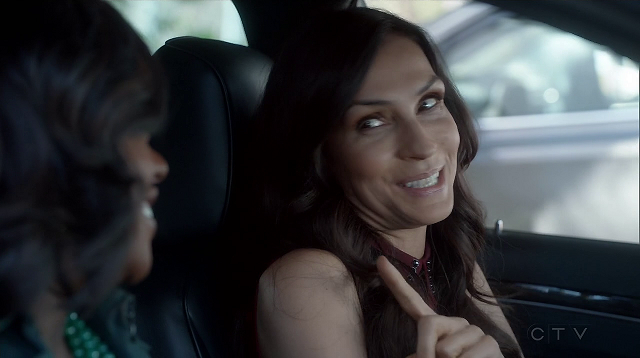 You’re just trying to open my Chamber of Secrets.

So when Eve meets Wes, Annalise goes, “It’s him.” And Eve goes, “You’re a good person.”

And then they have sex some more. Eve says she’s not really expecting anything more than some rolicking good times in the sack, but she doesn’t really mean that and Annalise knows; she says she would very much like to give Eve what she wants, and she does mean it, but Eve knows she’s never going to be able to follow through with it.

Okay and this whole time, in the future, Annalise is dying dying dying on the floor. Who shoots her? Well, it’s Wes. She needs someone to do it, to put a bullet in her leg because she’s trying to set up one of her clients, but no one will actually pull the trigger, so finally she goads Wes into doing it by calling him a moron and saying a whole bunch of stuff about his dead ex-girlfriend. He shoots her then, but not in the leg. He shoots her in the gut!

Flashback. Little Wes is at the police station talking about how his mom killed herself, and watching from behind the one-way glass is Annalise. And also Eve.

On the upside, Eve is so crucial to the big questions that she’s surely here to stay!