Previously, we welcomed The Fosters‘s spin-off and its new gay into the universe. It’s been a difficult transition to adulthood for Callie and Mariana — what with their stuff getting stolen, their jobs being terrible and that whole communal living situation — so it’s time for a little party at the Coterie.

Malika’s tucked in the back corner of the lounge, spinning tunes for the communal house party, and fades into the next track: LMFAO’s “Party Rock Anthem.” Across the room, Davia recognizes the beat right away and, with a shout, ushers everyone to the dance floor. It’s the Coterie anthem and all members are obliged to report to the dance floor. Dennis is out there — he’s always out there, it seems — his latest groupie clinging tightly to him. Mariana follows the parade, dragging a reluctant Callie along, and the sisters sway along to the beat. Alice pulls Gael away from his boy-toy and asks him to show off his moves. The synths go overdrive, the bass cranks up, bodies press against each other and the liquor starts flowing… and flowing… and flowing.

At that moment, the losing your mind thing is what everyone truly needs: Davia, whose growing prominence as a body positive Instagram influencer comes a bevy of online attacks from trolls; Mariana, whose work team of “bro-holes” continues to exclude her from activities and makes decisions about her work in her absence; Callie, whose been working non-stop to prepare for the Jamal Thompson case, while also prepping for the other 50 cases she has to clerk and studying for the bar exam. Everyone just needs a break. Including Alice.

In the moments before the beat drops on “Party Rock Anthem,” Alice is staring wistfully at the door, willing her best friend, Sumi, to show up. It’s Sumi’s birthday and Alice has baked a cake to celebrate the occasion. It turns out, Sumi isn’t just Alice’s best friend, she’s her ex – who cheated on her – and with whom she happens to still be in love. It’s not clear yet what Alice, who might be the nicest person in all of Los Angeles, sees in Sumi, who seems utterly self-involved, but the heart wants what the heart wants. 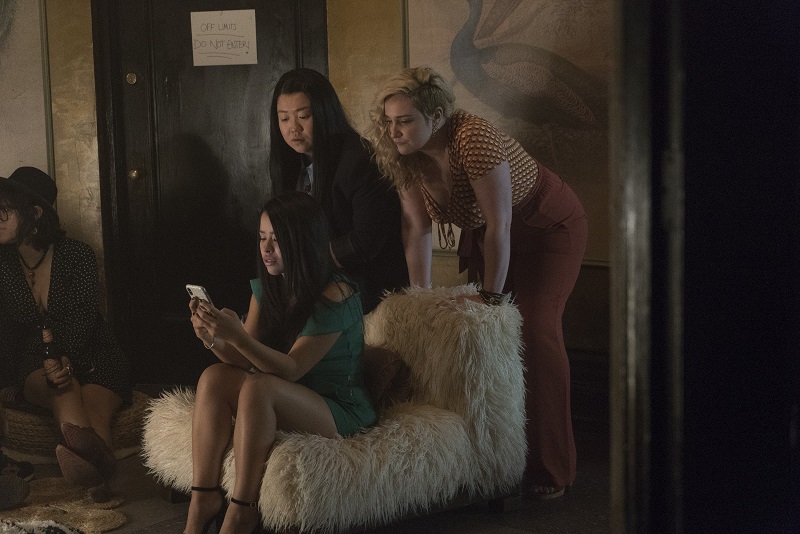 Flourishing on the ‘Gram

For all the members of the Coterie, the release is just a temporary salve and when sobriety hits, they awaken to a world that’s slightly worse than the one they tried to dance away. For Davia, sobriety comes when she realizes that one of the trollers is her own mother, continuing a lifetime of not supporting her when she’s under attack from bullies. Mariana sobers up real quick after Davia calls her boss, who Mariana had invited to the party as a show of goodwill, an asshole via Insta Story. She spends the rest of her night calling and texting him, apologizing for the mishap. Even Malika’s night is upended by her brother’s arrival: their mother is sick and he advises her to reach out before it’s too late. How the words “I’m never drinking again,” as disingenuous as they might be, don’t fall from someone’s lips after a night like this, I don’t know. 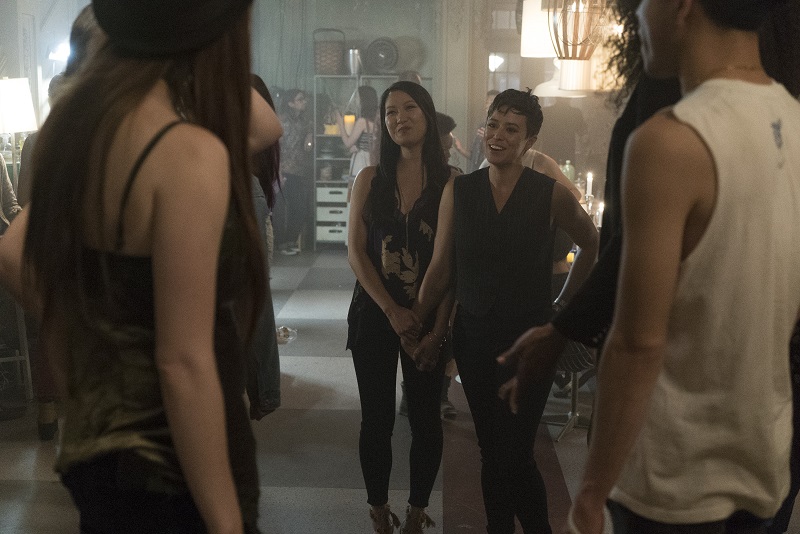 Sumi finally shows up to the party with her girlfriend, Meera, in tow (who I recognize right away as “the other gay” at the DEO on Supergirl). Just as Alice is about to surprise Sumi with her birthday cake, her ex announces that she’s engaged. Alice blows out the candles herself and retreats back to her loft to cry and comfort herself with cake by the handful. It’s sad, a little hilarious and, admittedly, totally relatable.

“You know that joke?” Alice asks when Mariana and Davia come to check-in on her. “What does a lesbian bring on the second date? A U-Haul. Well, what does she bring on a first date? Her ex-girlfriend. I went with Sumi on her first date with Meera, except I didn’t even know it was a date until she started making out with her right in front of me.”

As she’s wont to do, Alice reserves her sympathies for everyone else but herself. Davia encourages Alice to tell the truth but she worries that telling Sumi that she’s still in love with her would make things weird. Oh, I think we’re way past weird. Mariana pushes Alice to set some boundaries and Alice agrees but, as soon as the words are out of her mouth, Sumi and Meera barge into her loft. Mariana thinks quickly and tosses a blanket over the leftover cake and Alice uses it to wipe her hands before congratulating the happy couple. And then, just when you think things possibly couldn’t get any worse for Alice, Sumi asks her to be her maid of honor and, Alice being Alice, of course she says yes. So much for boundaries.

And, speaking of a lack of boundaries, we should talk about Callie.

Unable to lure Callie out of her “work cave” on her own, Mariana calls in reinforcements: Jude — it’s Judicorn! — pops into the Coterie to get Callie off the couch and into party mode. It’s not just work that’s keeping Callie on the sidelines, though, she’s still in her feelings about having seen Gael sleeping with another guy and has been avoiding him all week.

I suppose you don’t really know your biases exist until you’re forced to confront them, as the Adams-Foster sisters are when they see Gael hooking up with a guy, but hearing Mariana — “I’d be super insecure dating a guy who’s into both sexes, knowing that I couldn’t give him what another guy could, that would just drive me crazy” — and Callie — “I don’t know how I feel about having sex with a guy who has sex with other guys” — be blatantly biphobic was jarring.

“Do you remember in Turks you said you hooked up with a lot of guys with girlfriends?” Callie asks Jude, as she nurses her margarita. “Do you think those guys were, like, bisexual or really just gay and in the closet?”

There’s a moment of disbelief when she says it. Surely, I didn’t hear that right. Callie is too smart to be this dumb. But nope, just biphobia spilling out everywhere. And Jude, who’s too much of a self-involved teenager to realize this song isn’t about him, gives the worst response possible: “They were gay when they were with me.”

They all should know better. Callie says she’s not biphobic but, yeah, girl, you kinda are because words mean things. For the most part, the biphobia goes unchecked. When Jude realizes that Callie wasn’t prying into his sex life, he tries to smooth things out by acknowledging that bisexuality can be a “hard thing for some people to wrap their head around” (spoiler alert: it’s not) and apparently, that’s enough wisdom for Callie to change her tune. Later when she’s talking to Gael, it’s no longer about the fact that Gael’s sleeping with guys that bothers Callie, it’s that he’s sleeping other people.

After she sobers up, she strips off her clothes and jumps into the Melrose Place pool and Gael does the same. They make out, underwater, in a beautifully choreographed scene to Truvonne’s “Crazy Love” because all we need to solve biphobia is monogamy and soft R&B, I guess.

* Throws TV out the window *

I didn’t even drink anything so why did this episode of Good Trouble leave me feeling like I’m the one with the hangover?