In familiar and horrible news, bi women in the UK experience worse mental health than straight women and lesbians. Based on responses from 5,700 lesbian and bisexual women surveyed in 2007, bisexual women had worse outcomes than lesbians in most categories, according to a new study from the London School of Hygiene and Tropical Medicine published in the Journal of Public Health.

Only 16 percent of the sample identified themselves as bisexual, although other studies have shown numbers of UK bisexual and lesbian women to be about equal. That may be because bi women are ashamed to report their identity — a shame that leads to further mental health problems, the study authors note.

As we’ve reported, bisexuals struggle with physical health problems at higher rates than gays and lesbians, too. 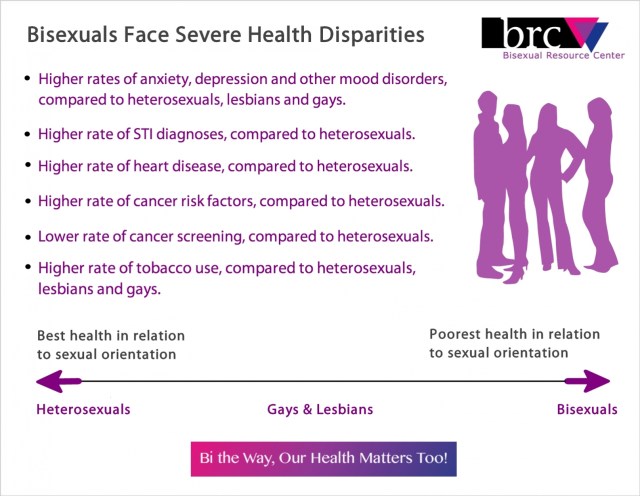 The press release on the UK study also notes that 10 years ago, bisexual and lesbian women had similar rates of mental health distress, and “The authors suggest that legal and social changes in subsequent years (e.g. the 2004 Civil Partnership Act, and improvements in public attitudes towards lesbian and gay people) may have benefitted lesbian women more than bisexual women. The 2012 Bisexuality Report highlights ongoing prejudice against UK bisexual people.”

Put another way, the fact that bisexuals are invisible in the equality narrative and often not considered while pushing policy efforts means we’re not benefitting from those efforts as much as our lesbian counterparts.

A study like this comes out a couple times a year and it can get exhausting to constantly realize how rocky the landscape is for bi women — a combination of poor mental health outcomes, shame, lack of resources and overt social prejudice and erasure look massively overwhelming.

But the first step is talking about it — studies like this are vital, even if they all say the same depressing thing, because they force people to confront the real impacts of biphobia and discrimination.

Last year’s LGBT MAP report “Understanding Issues Facing Bisexual Americans” highlights some suggestions for improving these outcomes. One key solution is bisexual competence training for healthcare providers — for example, therapists need to learn that bisexual patients may have very different experiences than gay and lesbian ones. Researchers looking at LGB issues need to investigate and report more precisely to raise awareness for the distinct needs of each group for the benefit of all groups and the community as a whole. They should also avoid conflating sexuality and gender identity.

Another necessary step is creating more bi-specific resources and projects within larger LGBT organizations and as stand alone initiatives to improve visibility, access and understanding about and within the bi community, and existing organizations and researchers need additional support from LGBT funders.

“We need to have executive directors who have the autonomy of being salaried by their organizations,” said bisexual advocate Estraven Le Guin. “It is so ironic that we have such high poverty levels and we can’t even pay the folks who are doing the work for us, they have to have other jobs on the side. ”

2014 was a big year for bisexuals. Bisexual celebrities were louder than ever — who can forget Anna Paquin’s perfect, side-eye-filled rebuttal to Larry King’s dumb questions? We celebrated the first ever Bisexual Awareness Week, the first ever Bisexual Health Awareness Month, Nickelodeon’s Legend of Korra gave us an animated bi couple to cheer for, and bisexuality became a mainstream topic after the New York Times Magazine article that shall not be linked revived the public conversation about whether bisexuality exists (hint: it does).

Let’s make 2015 even better. We need more funding for organizations like BiNet USA, Bisexual Resource Center and BiUK, some of the only groups dedicated to providing resources for bisexual people, and LGBT organizations need to dedicate more resources to bisexual people and our specific challenges. The media should stop questioning bisexuality’s existence and instead address our stories with compassion. Bi women deserve physical and mental health care that responds to their needs so we can make statistics like those in the UK study and so many others a thing of the past.