Bisexual people make up more than 50 percent of the LGB community, but media, the mainstream, and even LGBT groups often erase our experiences and specific needs or fold them into lesbian and gay programs and statistics. BiNet USA, GLAAD and other organizations hope the first ever Bisexual Awareness Week will be a step toward making more space for for the B in LGBT.

September 23, 1999 was the first Celebrate Bisexuality Day, and in that tradition a big part of the week aims to celebrate what makes bisexuality and bisexuals great, and honor our accomplishments throughout history and today. Organizers also want to make people aware of the stark realities non-monosexual people face, like poorer health, higher rates of sexual assault and relatively low rates of being out as bisexual — only 28 percent of bi people say they are out to the most important people in their lives, compared to more than 70 percent of gay and lesbian people.

“Bisexuals are coming together to say we can’t live with this anymore,” said Faith Cheltenham, the president of BiNet USA. “Because we haven’t been living with it — there have been a lot of suicides. I’ve lost three friends in this work since I started doing it because they had no hope.”

Bisexuals have successfully worked together to gain more visibility and pursue proactive policies and services in recent years. There are many ways to celebrate and honor Bisexual Awareness Week. Here are a few! Add your own in the comments.

1. Educate yourself about the specific challenges of bisexual people and support efforts to improve our lives.

A new report from the LGBT Movement Advancement Project uses data to demonstrate the ways in which bisexual people face specific challenges and thus require targeted solutions. The report collates a lot of data that has been widely shared and discussed on this website and many other places — and that’s because there simply isn’t much reliable data on bisexuals, said Heron Greenesmith, a movement and policy analyst for LGBT MAP. It’s startling and important to see so much data collected in one place. The report highlights poor physical and mental health among bisexuals compared to heterosexual, lesbian and gay people; higher levels of poverty; and higher rates of intimate partner and sexual violence among bisexual women. 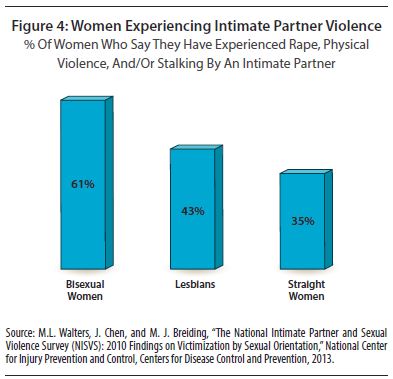 This report gives the media, service providers and bi people a comprehensive place to go to look for information and statistics about bi people. Says Greenesmith:

I’m hoping that media will use it and all the resources collected during the week to speak more competently about the LGBT movement and understand that even the LGB part is not a monolith. I’m hoping LGBT organizations will see it as an invitation to showcase their bi-specific programming and for those who don’t have any to understand the necessity and the importance of having bi-specific programming. I’m hoping that bi folks will see it and know that not only are they not alone but other people are going through the same challenges they are facing in their lives and folks are out there who are supporting them. I’m hoping that service providers and researchers will take it as an invitation to be more culturally competent and precise in their language around LGBT people and in their work.

The research presented demonstrates why it’s harmful to fold bisexuals in with gays and lesbians or heterosexual people when doing research and providing services. For example, Cheltenham noted that many LGBT-oriented health centers can’t or won’t provide bi-specific health care and may even turn away bisexual patients. The lack of information and awareness has very real consequences. As Greenesmith said, there is a dearth of research on bisexuals, and not much of what does exist accounts for the intersections of oppression that put some bisexual people, like those who are transgender, gender nonconforming or non-binary, of color or low-income at greater risk. With more knowledge, policymakers and service providers can better target their work to reach the most people and improve outcomes for bisexuals and everyone in the larger LGBTQ community.

I semi-regret getting the incredible Bi: Notes From A Bisexual Revolution by Shiri Eisner on Kindle because it makes it harder to foist it upon people and make them read it. Before I read it, I was timid about identifying as bi because I felt like it carried baggage I wasn’t prepared to handle. After reading Eisner’s book, I became excited and proud to call myself bi (in addition to queer) and quote it at anyone who will listen. Now I’m making my way through Getting Bi: Voices of Bisexuals Around The World, an anthology of more than 200 essays from bisexual people from 42 countries who speak from many different experiences of gender, race, class and more. Its editors, Robyn Ochs and Sarah Rowley, are among the most trusted and active bi women in the U.S. and internationally. Next up on my list is Bisexuality and Transgenderism: Intersexions of the Other. It’s a textbook, so it’s expensive and hard to track down, but it is an important resource for people interested in the ways bisexual and transgender identities, movements and oppressions overlap and diverge. Because bisexuals are often erased in mainstream works about lesbian and gay people, bisexuals are creating our own texts, with many awesome results.

3. Donate to organizations that support bisexuals.

Although bisexual people make up a very large portion of the LGBT community, funding for bi-specific work makes up a small part of funding for LGBT programs. If you’ve got extra dollars floating around, put them toward the work of improving quality of life for bisexual people. National organizations like BiNet USA and Bisexual Resource Center are collecting resources, energizing communities and working directly with LGBT and mainstream leaders to promote bisexual causes and get information into the public. Find out if your local LGBT resource center provides bi-specific programming and give a donation marked for that program. Become an A+ member to help financially support the bisexuals who work at this website, and so you can read our staff emails where we finally explain bisexual orgasms (hint: they involve ghosts).

4. Engage with people online and in real life about bisexuality. 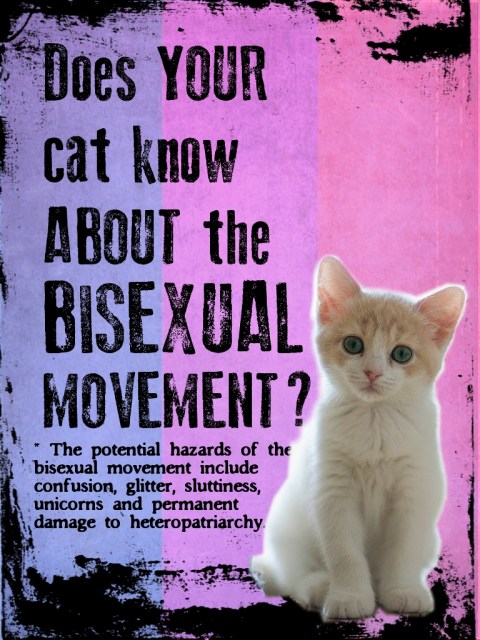 Cats are like “I always knew I was different but didn’t have the words to express it before.” via bidyke.tumblr.com

BiNet has a series of hashtags for the week to highlight different aspects of the bisexual movement, which you can find on their site. The hashtags so far — #bihistory and #bifacts — have provided some amazing insights and resources, so check them out on the twitters and contribute! There are also a ton of official events, like meetups, trainings and concerts, plus online activities like a Google Hangout with bisexual Christian heartthrob Eliel Cruz hosted by Campus Pride. If none of that is your bag, just paint your face blue, purple and pink and go to brunch.

5. Acknowledge and celebrate bisexuals and bisexuality.

It seems so simple, but it often doesn’t happen. Bisexuals are often an afterthought, lumped in with bigger headings like gay, queer and LGBT without being named as our own community with specific needs. Subtle changes to daily language — the simple act of naming bisexuality and actively including bisexual people and concerns in activism, policy language and service provision will make an impact. The fight is so much bigger than visibility, but reversing the damaging impact of erasure and silencing is an important first step toward caring for bisexual people and communities. Some people aren’t comfortable with using the term bisexual for themselves or as an umbrella term, and all these suggestions apply to people of many non-monosexual identities.

Bisexual Awareness Week is about more than awareness — it’s a chance to loudly declare our presence in the LGBT community and the world and work for the rights, respect and services that will keep us alive and help our community become healthy and vibrant.