This Gentleman Jack recap contains spoilers for season two, episode seven, “What’s All That Got To Do With Jesus Though?”

I’m starting to think Captain Sutherland needs to be fed to the pigs, you guys! He’s doing that thing men do where they’re like, “Oh I am calling a LAWYER to SUE you for being a B-I-T-C-H!” when actually they’re the ones who need to have a lawyer called on them! Lock her up, etc. See, Sutherland used his masculine wiles to get Elizabeth Walker to sign over her whole estate to him when they got married, even though her dad made a provision in his will so she didn’t have to do that. And so now he’s just so sure Anne Lister is doing the same thing to poor Ann Walker. He is vexed! And every letter he sends gets more disagreeable! He’s sweating and writing and crumpling up his papers and throwing them in the fire and stomping his wittle feets and saying things like, “Well, I, for one, cannot wait to divide up this estate and lose the other half of it that I assumed was mine because I am a man — who has a sword in his office! A man’s man!” 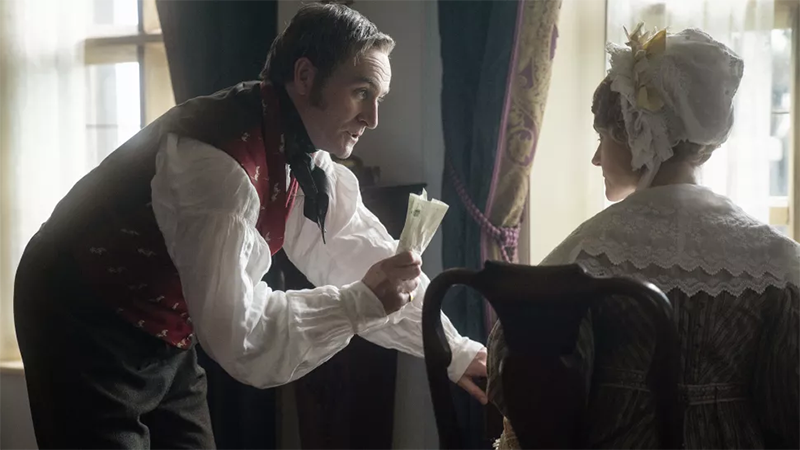 Not once — not one single time, in any of these letters — has she offered to make me a sandwich!

He’s lying, of course. Which you can tell because he’s sitting like Dr. Claw from Inspector Gadget this whole time, with his back to the camera, and his hands clenched into fists, mumbling fitfully to himself about how everyone’s evil and out to get him. He won’t sign anything, and he won’t drive south to York (something he was eager to do when it was to collect Ann and her money, by the way), and he especially won’t listen to Elizabeth when she says she’s frankly giddy at seeing her sister take control of her own life. She seems happy! Really happy! When Sutherland finds out Ann’s living at Shibden Hall, and that she’s been reading over all the deeds to her land, which she took from the bank, which is perfectly within her rights, he fires off a letter that’s practically hissing LESSSBIANS to his man-friends in Halifax. “She’s not her husband!” he yells at Elizabeth, and she just shrugs, because would it be so bad if her sister did marry Anne Lister?

People all over town are mad at Ann, actually, because they’ve been using her stuff for decades without paying or even saying thank you — and now that she wants an accounting of it all, well, as I said: B-I-T-C-H. One of the Mrs. Rawsons yells about it in the ribbon store, of all places. Ann Walker seems like she might cry, but Anne Lister just cocks one of those eyebrows that’s been growing gayer by the episode and hums her distaste. 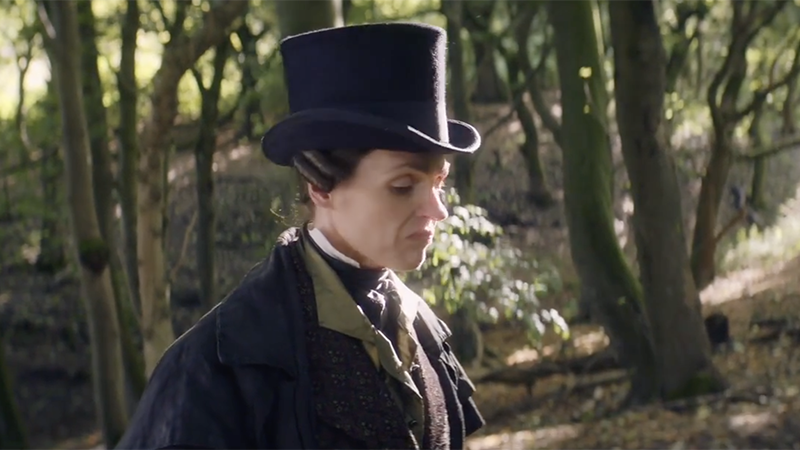 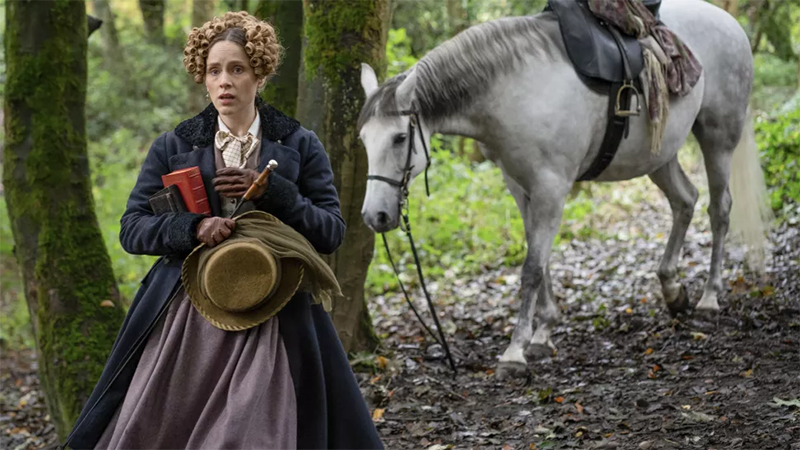 The best thing Ann repossess is the Sunday School classrooms because it gives Anne Lister the chance to start shaping young minds. Mr. Washington and Ann Walker just read Bible stories to very bored children. Okay, very bored children besides this one girl who’s listening with her whole body and who exclaims “bastard!” when the guy before the Good Samaritan crosses the road and doesn’t help the injured man. Anne Lister does a bunch of geometry on a chalkboard, raves about Euclid, claps her hand down onto a child’s desk and exclaims that God’s most wondrous creations — top to bottom — can be explained by conic sections and number theory. Honestly, the kids are spellbound. One of them does ask what all this has to do with Jesus, sir, and that just causes Anne to gesticulate with even more passion about axioms and mathematical rigor. I cannot wait for them to hear the story of Gentleman Jack and the Dissected Paris Baby.

Anne is advising her wife on all her financial matters, of course, while saying “This has nothing to do with me” to anyone who will listen. But that’s only a small part of her weekly business, which she is conducting at an even more rapid pace than usual because she’s hijacked her father’s gig and is driving it to and fro over the hills of Halifax like a race car. She’s hired a new architect to work out her scheme of putting Halifax back on the map. Yes, the inn for coaches. And yes, the little shops. But what about a roller rink? What about a golf course? What about a water park? This young architect wins Anne’s respect right away because he rhapsodizes about Shibden Hall having more character than any house in England, and also, like Anne, he forgets to eat because he likes to work so much. She decides to borrow another four thousand pounds or sell her stock in the canals, much to the consternation of her bamboozled financial adviser.

Captain Lister remains unmoved by Anne’s great plans for Shibden. He says “bah humbug” and Marian says “do you mean bum hug?” and giggles like it’s the funniest joke anyone’s ever told. God I hope she doesn’t marry that carpet guy; there’s no way he knows how to laugh. 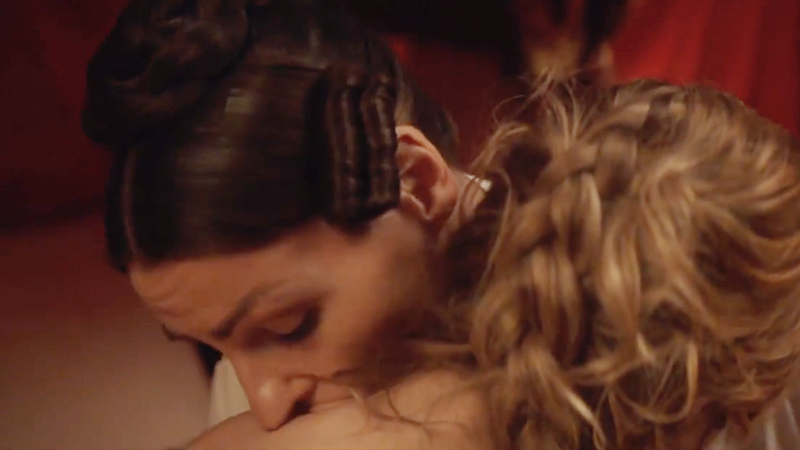 Shibden’s wives have found their groove, and their back-and-forth is an absolute delight to watch! The way they’re doing that queer thing where their mannerisms are becoming the same, and they’re completing each other’s sentences, and the slightest energy shift indicates whether or not either of them want sugar in their tea without having to say a word. Ann likes having all this stuff to do! It’s a welcome relief from sitting all alone up at Crow’s Nest with whatever cousin and constantly worrying some vicar’s gonna drop by and try to make her his wife. Anne proposes a trip to London; she says she’ll even introduce Ann to some Lords and Ladies “if you’re very good.” GULP. 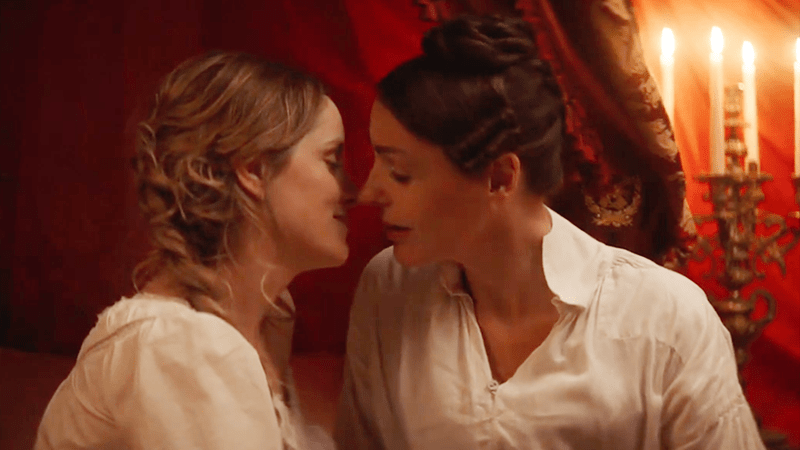 Enough theorems for one day, sir.

But it’s not all domestic bliss. Anne and Ann catch Eugénie shagging the new footman in the woods, and while Ann thinks it’s hilarious, Anne does not! She yells at them to button up and go home, where she summarily dismisses Eugénie and tells Marian they need to hire a new footman. Marian’s not too scandalized either, to be honest. I mean, all these people are living with the most famous lesbian in the entire world. Little woodland trysts between the staff kinda pale in comparison. Eugénie says she’ll get married to this guy if Anne will let her keep her job, so she agrees. If Anne could only understand that Eugénie, too, is well ahead of her time. Alas! Like so many lesbian daddies before her — Bette Porter, just for one example — she’s great at the pythagorean theorem, terrible at self-awareness.

Next week’s the Gentleman Jack season finale, and it seems like a showdown in Scotland is inevitable. Hopefully there will be plenty of flannel and shortbread to go around. My kind of party! I hope you’ll join us for our A+ virtual watch-along!