Our photoblogger Robin is preparing to shoot Nicole Pacent & Rachael Hip-Flores, the star couple of the coming-of-age lesbian-themed webseries Anyone But Me, and Nicole is fixing Rachael’s hair

when Rachael jokes, This is her other job, I’m so clueless about this stuff, and Nicole laughs in agreement, I’m always moving this one strand of hair!, and then Rachael laughs at something else, like a thought she just had, and she shares it with the group, You know what’s really funny? Every time I say Hi to you [Nicole], in a context outside of the show, and we hug, I have this instinct to like — kiss you! And I have to be like, no no, we’re not shooting —

Nicole cracks up, That is so funny, that is amazing, and it is, and so we’re all laughing. Sure, out actress Nicole Pacent has noteworthy lips and it’s arguably difficult to even speak to her without wanting to kiss her, but Rachael’s instinct likely comes from other places — like that these two bright, interesting, radiant girls, brought together by a TV show to kiss all the time, have an effortlessly comfortable friendship. After spending the afternoon talking to & photographing them, we can safely say that this genuine bond is part of what makes Anyone But Me so quietly magical. 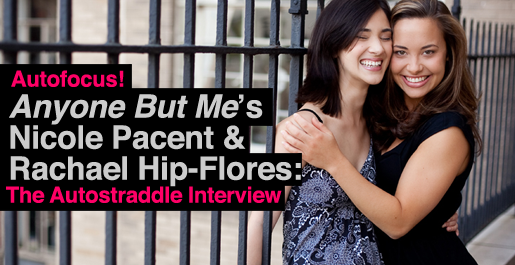 After wrapping up their first successful season of Anyone But Me in May, the girls are patiently awaiting the fates of their characters, Vivian (Rachael) & Aster (Nicole) while the Executive Producer/Writer team of Susan Miller (read our Autostraddle interview with Susan here) and Tina Cesa-Ward remain fiercely obtuse on all plot details. VivSter are two super-cute lezzies torn apart by the Metro North Railroad when Viv’s family is forced to leave the city for Westchester due to her father’s 9/11-related health condition. As Vivian struggles to adjust to her new life and new friends she’s also dealing with the changing nature of her relationship with Aster.

It’s Autostraddle Tradition to solicit interview questions from our Interns, which we usually ask at the end of the interview. We decided to switch it up this time and begin with Intern Questions. However, Rachael & Nicole were so awesome that we never got past the Intern Questions and instead journeyed deep into tangental territories. We are not worried about this because we intend to be besties and therefore feel there will be plenty of future opportunities for more questions & answers.

Our photoblogger Robin Roemer was able to shoot the pair at writer Susan Miller’s apartment which had a very lovely balcony. They are very photogenic and we all agree a prom episode should happen next season. We discussed hot topics like books, Nicole’s bisexuality, the potential of Vivian & Aster breaking up and the time they got Rachael really drunk on a boat in Provincetown and she danced with girls. 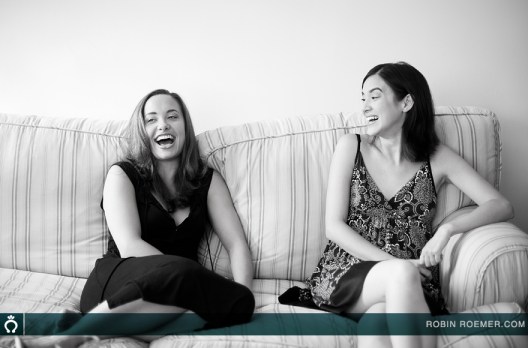 Question #1 – Is Nicole as high maintenance as her character, Aster?

Nicole Pacent: Aster is high maintenance? I don’t know! I’ve never thought of it like that before! That’s so funny. Well, I guess she can be a little dramatic.

Nicole: Okay, she’s a litttttle needy. But I’m not! I’m a fairly low-maintenance person. And I tend to date low maintenance people too, ’cause I don’t like to deal with drama. Every once in a while I’ll get dramatic — the other day I pulled something with the person I was dating where I got really mad and I’d had a little bit to drink — that never helps – and I stormed off. He was like, “Don’t be crazy,” and I said “I’m gonna be dramatic right now and I don’t care.” So I have my moments. But usually no.

Riese: Do you agree, Rachael?

Rachael: Yes, Nicole isn’t high maintenance. But Aster is. She’s got her needs.

Question #2: What Are Your Favorite Books?

[The girls react to this question with giddy squeals of delight and excitement.]

Nicole: Oh my God, both of us are such nerds!

Rachael: Okay, it’s been going on a year ago now since I read this — but the His Dark Materials Trilogy (The Golden Compass; The Subtle Knife; The Amber Spyglass)

by Phillip Pullman. Are INSANE.

Nicole: I’ve only read the first one —

Rachael: You need to read the other two because the other two will WRECK YOU! The Amber Spyglass is one of the best books I’ve ever read.  The story is gorgeous and complicated – the word “metaphoric” kind of simplifies it a bit, but it’s just a beautiful exploration of coming of age. Innocence versus experience, metaphysical themes, religious themes. Reading it is an amazing life experience. So that’s my official recommendation.

Nicole: You and I are both so into fantasy! …  I’m hard not to please when it comes to literature. I end up loving most books that I read. So at any given time, the book that I’m reading is my “favorite book.” Traditionally, I’ll go with Brave New World

and when I was younger, A Wrinkle in Time

Rachael: I need to read that!

[Lots of geeking out] 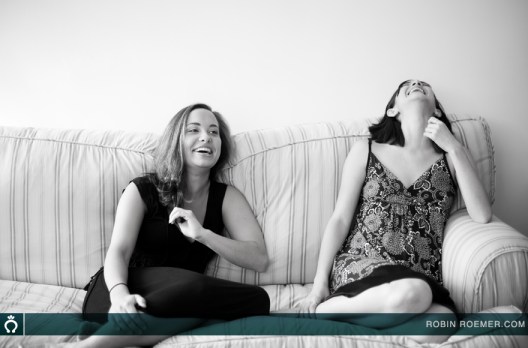 Nicole: You of all people have to read it, it’s fantastic! Also – Extremely Loud and Incredibly Close

Riese: I loved that book! We did a “book club” with Wao on my blog last year so I could force everyone to talk to me about books.

so that’s my favorite book! I’m two-thirds through and eating it up. It’s like watching a train wreck in slow motion and just praying that it doesn’t happen that way – and you just know it’s going to — because everything that Ayn Rand is about would come to fruition if it didn’t happen that way and you’re like AHHHH STOP PLEASE — but it’s amazing. I’ve never seen such amazingly fleshed out characters in my life; I want to see the screenplay! And I’d recommend it to anybody.

Rachael: Oh! And, so I just finished Lord of the Flies

for the first time —

Rachael: Oh my GOD. It was terrifying; it was absolutely terrifying. And I just started reading Coraline

Rachael: Neil Gaiman is? Really? I thought he was married?

Rachael: Huh, okay. Well I … live in a cave. Is the problem.

Riese: I live on the internet, is the problem … Did you go to school for English? I know you went for acting —

Rachael: I doubled in English.

Nicole: I minored in English actually; I started with a double and then went down to a minor ’cause with the conservatory it was just too much —

Rachael: Um yeah it was! But I’m a masochist, I didn’t have summers basically for three or four years I just went to school round the clock —

Riese: What do you do in the summers anyhow, right? Popsicles, sprinklers, whatever.

Rachael: I’ve heard of this thing called “the ocean.”

Rachael: I’ve read about that in stories.

Nicole: But the best thing to do at the beach is READ!

Nicole: [pointing at Rachael] This one does!

Riese: Are you not a computer person, Nicole?

Rachael: But you can meld them now! 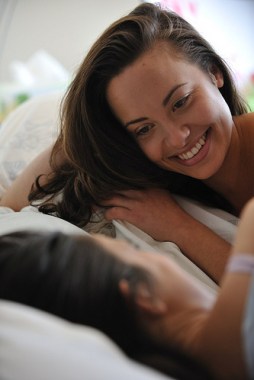 Riese: Wellll … you probably have this same experience but there can be a lot of facebook friends that you don’t actually know who they are, where you’re like who are you? You had a baby, you have a feeling, you saw a show, I don’t care.

Rachael: But on twitter it’s just status updates just from the people you want to know about. It’s more convenient that way.

Nicole: I do have a twitter but I just use it for the show and I’ve only used it like twice.

Rachael: Incidentally people often ask me, Can you tell Nicole to twitter more, because she doesn’t twitter.’

Nicole: Alright, you did your duty.

Rachael: For favorite trending topic, I would have to go for “first three words after sex.” Those are good for a laugh.

Riese: See, these are the things that are happening on twitter that you’re missing!

Rachael: Alright so you tag whatever note you’re writing as “the first three words after sex” and it’s a trending topic. So you write down the most flattering or the most horrible or bizarre or exciting first three words that you say just after you had sex and the stuff that they come up with is just hilarious.

Nicole: Alright, I’ll give twitter that. I’d enjoy that.

Riese: Do you have an idea for your first three words after sex for your next tweet?

Rachael: Me? [Laughs] No. Because then I’ll just be like, I thought it was way more clever than that. I just observe. I’m like, “Well done! That was creative!”

Nicole: I keep thinking of 4 and 5 words! Three would be really hard.

Robin: That’s what she said.

Question #4: I’m hoping Aster and Viv break up to see if they can whether something like a fling with Sophie. Do you have any thoughts on that? 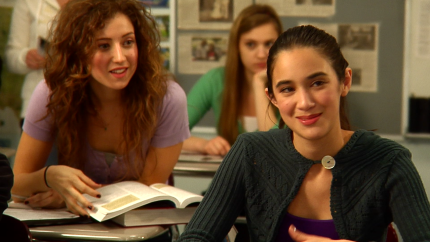 Nicole: I agree. As long as I don’t get written off the show, I agree!

Rachael: Absolutely. It would add a whole other layer to it. It would be interesting to explore.

Riese: Do you know what [the writers] have up their sleeves?

Nicole: Absolutely not, they keep it very very quiet!

Rachael: I have no idea … We had no idea what happened in the last episode until pretty much a week before we shot it.

Nicole: What’s interesting though is we get so many reactions from fans saying that they are happy to see a couple that works through things and doesn’t just break up all the time like on every other show. I know that [writer] Susan likes that idea, too. I’m not saying she’s sticking to it, but she loved the Bette & Tina [on The L Word] relationship  – because they were such a longstanding thing —

Riese: But everyone freaked out when they broke up, like it was the end of the world.

NEXT: “The world REALLY ended when Dana died ’cause that was the stupidest move on any writer’s part that I’ve ever seen in my life. “