Tangent: The L Word and the Death of Dana Fairbanks

Rachael: When you see a couple that really loves each other —

Nicole: — you get really attached to the characters and don’t wanna see them leave. I mean for me the world ending was when Shane and Carmen broke up — no! When Alice and Dana broke up! And then the world REALLY ended when Dana died ’cause that was the stupidest move on any writers part that I’ve ever seen in my life. And I will say that unabashedly. Anyhow, when Carmen was written off I was like WHY…???

Riese: But see at least Sarah Shahi wanted to leave the show, and Erin Daniels didn’t. That was the nail in the coffin. 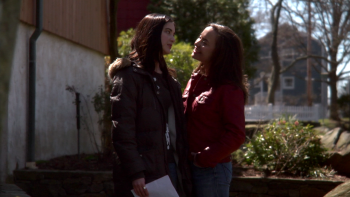 Aster & Vivian Have a Fight

Riese: We were all lead to believe that she wanted to leave so when we saw that little documentary afterwards and found out she’d been written off –

Nicole: I remember watching that!

Riese: Right! We were all sitting there with our tears like WHAT THE FUCK?

Nicole: TOTALLY. The death of Dana Fairbanks changed the face of The L Word. I was really angry about it!

Riese: That’s when [Ilene Chaiken] lost the viewer’s trust, when we stopped trusting her to make the right decisions for the characters.

Tangent: Ensuring Nicole Will Stay On The Show 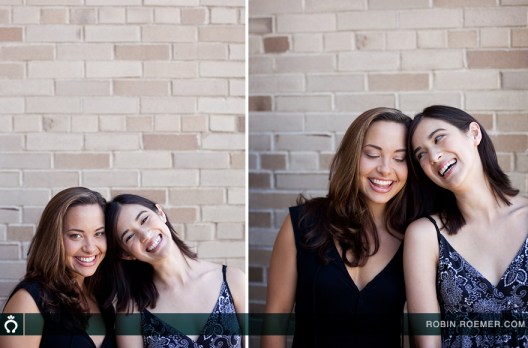 Riese: How would you see your character fitting into the show if Aster & Vivian did break up -?

Nicole: [laughs] Oh God! Well we’ve talked about how it’d be interesting to show more of Aster’s – and Vivian’s — own lives outside of each other, especially with Aster in the city. That’s why as the season went on you saw more of Aster with Brett, or alone in the city, ’cause the idea that it’s entirely centric around Vivian is unfortunate and unrealistic, you know what I mean? So I think that it would become like it is in a breakup really when you’re that close to someone. They’re always there —

Riese: You’re texting them, talking about your ex all the time —

Nicole: Exactly, they’re in your consciousness no matter what else you might be doing; they’re going back and forth about the breakup, so I feel like it would be easy to keep her on the show that way.

Riese: So you both think it would be good for the storyline?

Nicole: I think it’d be good. I like drama. Just let the drama happen.

Rachael: I think it would be interesting.

Nicole: As long as nothing crazy goes on.

Riese: What about Sophie specifically as a potential fling?

Rachael: I love Sophie as a character. There’s so much to explore there, things would get complicated trying to figure that relationship out. 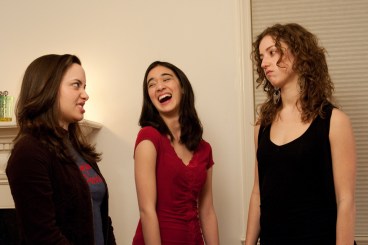 Behind the Scenes Photo by Michael Seto

Nicole: In thinking about it … I like … I have realized that I’ve become like legitimately jealous about it.

Riese: Well you could try and seduce Sophie on the other end.

Nicole: Well that’s the thing, I think Aster should just sweep in and register in the school and take over!

Rachael: See I don’t think it would be a seduction from her end though. The really insidious and sort of complicated and scarier part is when it’s just real emotional connections.

I think as refreshing and as interesting as it is to see couples work things out, that’s a very mature way of dealing with something, you know? When you’re 16 you’re always breaking up and getting back together.

Nicole: It’s so bad! As a storyline though it’s interesting and worth exploring. You often do have to part ways to come back around.

Rachael: Especially when you’re that young.

Nicole: It’s to be expected in a lot of ways, I mean — I think as refreshing and as interesting as it is to see couples work things out, that’s a mature way of dealing with something you know? I think when you’re 16 — when I was 16 — people would be breaking up every three weeks and then getting back together.

Riese: I feel like with a lot of shows about high school you sit there like, “C’mon really guys are you gonna be together forever?”

Nicole: I could see Aster pushing Vivian away — you know, into the arms of another woman. I always thought if someone’s gonna cheat, it’s gonna be Aster.

Riese: She’s also in the city so she has all these opportunities…

Nicole: Exactly. So Vivian would emotionally cheat, Aster would kinda sense it, get really resentful, and then not be a good communicator and go get drunk and hook up with someone.

Riese: And meanwhile Vivian is having LONG conversations with Sophie. Just really long conversations but nothing really sexual while meanwhile Aster is at Henrietta’s dancing on the bar with her shirt off.

Nicole: I had this convo the other day too — like which is worse? I can get past someone being like, this was such a mistake, I made out with somebody— that for me is a lot easier to get past than if the person you’re with really CARES about somebody.

Rachael: I understand exactly where you’re coming from but I just don’t see where having a long conversation with someone and caring deeply about someone on the talking level has to be mutually exclusive with whatever relationship you’re in.

“You can always say no to a physical thing and so the fact that you don’t say no, I think THAT shows less respect for the person that you’re with.”

Riese: Well, if you’re into the person —

Rachael: But … you’re not acting on it though —

Nicole: But you ARE! And I’ve done all of it, I’ve cheated, I’ve emotionally cheated and I’ve had it done to me. When I look back I know the more dangerous thing was always the emotional cheating. When I did it — and I can say that — the bigger threat to the relationship was the emotional moreso than anything that could happen physically.

Rachael: I completely agree that that is the bigger threat to the relationship. But if you can withstand that and make the decision that you’re not gonna act on it, that makes the commitment and the love between the two of them that much stronger because you resisted that temptation.

Riese: But what about “the act” itself makes the act so much more significant than feeling?

Riese: What is it about hooking up with someone that makes it more dangerous?

Rachael: I feel like physicality is a really intimate thing.

Nicole: I think it can be and it cannot be — 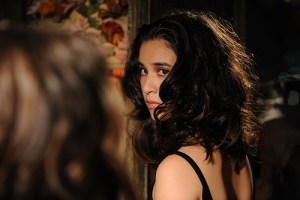 Rachael: I agree, yeah you’re right, of course it can be and it cannot be. But the fact is — when it is intimate, it’s because of the emotional connection.

Nicole: I feel like the purely physical act is a more tackle-able issue in a relationship. Like you can ask, “what’s lacking for us in our sex life that needs to be dealt with?” or “what are you dealing with personally that has maybe lead to this breakdown in communication?”

Nicole: Yeah, yeah exactly. Versus like, “Oh no. Are you not in love with me?”

Riese: Like “Does somebody understand you better than I do?”

Nicole: “Are they better for you?”

Rachael: I completely understand that point. On the other hand – [laughs] because I like to argue, because I like debating things — it’s so much more of a decision. You can always say no to a physical thing and so the fact that you don’t say no, I think that shows less respect for the person that you’re with. And that’s a bigger deal to me.

Riese: I actually never thought about it like that.

Riese: Have you seen Closer?

Riese: “And she says there’s always a moment — when you say I can do this or I can resist it–”

Rachael: Amazing line, that’s such a good play. And that’s it, that’s exactly it. That is awesome.

NEXT: “When the interview on SheWired was first published, where I first talked about my sexuality, I was like [sighs] — WOW okay — there it is! WOW! It is something I’d always thought about a lot, how I would handle that.”
[ad#postads]

Before you go! It takes funding to keep this publication by and for queer women and trans people of all genders running every day. And A+ members keep the majority of our site free for everyone. Still, 99.9% of our readers are not members. A+ membership starts at just $4/month. If you're able to, will you join A+ and keep Autostraddle here and working for everyone?
Join A+
Related:Anyone But MeAutofocusbisexualitygreatest hitsinterviewnicole pacentrobin roemer photoshoot