Riese: So when did your parents come around?

Kim: It was very gradual. I told my parents when I was 16.

Riese: You had already told your friends?

Kim: Oh, yeah. I went to a school called Brearly in Manhattan which I loved. Very open-minded, tons of lesbians, very smart and progressive school, so I was never closeted in any way. I don’t know how to be. I wear my heart on my sleeve as it is.

I knew that I was right, and I knew that there was no way that what I was doing could be wrong, and I was in love so I was okay.

I was always open with my friends. I had a girlfriend I was really excited about — that feeling that I was in love, for the first time! And then I got caught once by my parents and I completely denied it. It was like, “Oh, okay, she’s experimenting.”

They wanted to believe I was straight, so they did … but they did ask me repeatedly over the next eight months if I was dating a girl. Finally I caved, ’cause I was tired of lying. I told them, and it didn’t go as planned. My parents were very, very conservative.

Riese: Did you sit them down and everything?

Kim: Actually no, it was in this room [we’re in right now] actually. I grew up here and I’ve had this place since I was 18 and my parents moved to London.

So I was walking in here, and they asked,“Where are you going?” and I said, “Going over to a friend’s house,” and they asked if I was going to see the girl they thought was my girlfriend — she was, obviously, actually my girlfriend. And I said “Yes, I am.”

And so my dad was just like, “Are you dating her?”

And they said, “Are you in love with her?”

And I don’t really want to bash my parents and go into all the nasty details, but I basically didn’t have parents for a few years.

They told me I’d been their best friend and their daughter but I wasn’t either of those things anymore. It was an unbelievably hard time but at the same time, I knew that I was right, and I knew that there was no way that what I was doing could be wrong, and I was in love, so I was okay! But I didn’t really talk to my parents for a while. 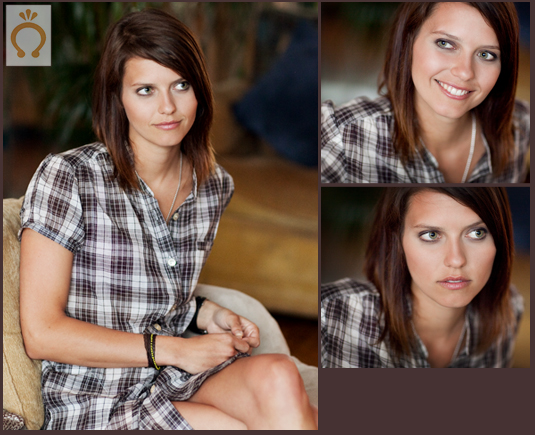 Riese: Were you still living with them?

Kim: I was but I just didn’t spend a lot of time here. And then I graduated from high school, and they moved to London ’cause my Dad was changing his job and it was good for them too. They had a blast traveling around all these European cities and we got some space.

When time came for them to watch Top Model, which they did, I think they started seeing gayness in a normal and great light because people liked me for that.

I knew my parents weren’t ready to be good parents yet but I thought maybe they’d be my friends. I’d always idolized my father; I thought he was the coolest, always the life of the party, totally charming great guy. And he totally married this supermodel! My Mom! So like — you know.

The time difference was like five hours, so I started calling them at two in the morning when all of our defenses were down and we just started becoming friends again. So I was talking to them as people who felt like my friends and slowly but surely they started feeling a little more like my parents.

And then I remember on one break, we were all here in this house and my Dad came in with the Sports Illustrated Swimsuit Edition, and handed it to me. And I was like, “Yeah, dad it sucks that you’re so against this, because I think if you weren’t, you’d be like, ‘Wow Kim, way to go, some of the girls you’re getting are really hot!'”

We went through a few tough spots around the Top Model thing because the one promise I made to them was that I wouldn’t tell our family and “embarrass them.”

When Top Model came around, I was like, “Well, [shrugs] I guess everyone’s gonna know now,” and they weren’t happy about this at all.

But when time came for them to watch Top Model, which they did, I think they started seeing gayness in a normal and great light, because people liked me for that on the show. That was an attractive part of me on the show, it wasn’t anything embarrassing or perverted, and it was just a great thing. I think they started seeing me through the eyes of all the accepting people.

Riese: That’s really interesting, it’s like they came around at pace with like — America, how they felt watching it.

Kim: Exactly. And that really changed things for them, it made our relationship a lot better. Now last year they called my girlfriend my girlfriend, not my “friend.” They came when I spoke at the Prop 8 Rally at City Hall — they were right behind me. I said it at the end “and my parents are here too.”

Robin: They were at the rally with you, that’s amazing, that’s like a total come-around.

Kim: Yeah, you know, I talked to them endlessly about relationship stuff now, and I never could before.

Alex: It almost seems like you needed the complete fall-out in order for things to be better now.

Kim: You know, I was like an only child who got a lot of attention, so it was good for me to learn to be independent although it was abrupt. But yeah, I survived it.

Robin: It had to be your comfort with it, too. It must have helped them.

Kim: Yeah, I mean I think that I was unwavering in my comfort with it. There was never a moment when I struggled. I can definitely say that there was not ever a moment in my life when I was like, “Uh oh, maybe I don’t want to be gay, oh no, what does this mean?” For me, I was so lovestruck, it was like, if I was in love with someone, that was enough to make me happy. I was just excited about it.

Riese: I think it’s hard for people to maintain intolerance when they’re with someone who won’t apologize.

If you sit people down ashamed like, “I have something to tell you…” then you open it up for judgment. Come out and say “yeah, I’m gay,” and be confident about it. Then there’s not much room for criticism.

Kim: Yeah, I always tell that to people who ask me about coming out.

Kim: If you sit people down ashamed like, “I have something to tell you…” then you open it up for judgment. Come out and say “yeah, I’m gay,” and be confident about it. Then there’s not much room for criticism. There can be. There are parents, like mine, who definitely were not psyched about it, but it’s a lot more constructive to be confident in who you are, because other people will be too.

My parents are great. They’ve come such a long way. I don’t know that they’d ever say, “we’re happy you’re gay,” but they’re happy with who I am. And I am gay. So, I guess, indirectly, they are.

Riese: Are they — or you religious? What do you believe in?

Kim: I was born Presbyterian and confirmed in the Presbyterian Church. I feel religious in a spiritual way, not in a go-to-church every Sunday kind of way. But I certainly want to be married in a church. So I’m a little bit religious, not a lot.

Riese: It’s hard right now, because I feel like we’re at a point in culture where we’re between super-organized religion and people trying to find their own way. The super-organized way can be such a put-off, so you have to find a sort of middle ground.