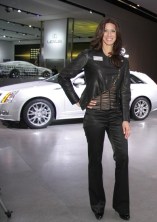 PEOPLE ARE NOT OBJECTS, VICE VERSA: Jalopnik has solicited the confessions of an “auto show girl,” author of the blog Do You Come With the Car, who would like to remind the consumer that “the fact that I am an attractive woman being paid to draw your attention to a vehicle does not give you license to hump leg, literally or figuratively.” She explains the training the girls go through before hitting the floor: “we have extensive training from the very engineers that design these vehicles. We have piles upon piles of confidential and public industry information we spend months studying before we take a single step onto the show floor.”

Here’s a little video from FOX (surprise!) Toledo — the anchor of course had to put the whole piece on his youtube channel lest the network cut some shit to make him look better: 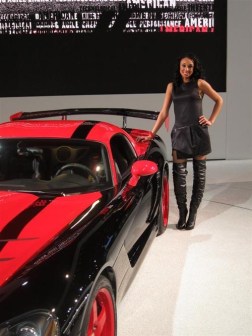 Anyone who’s ever done promotional modeling, waited tables or really even just delivered cocktails to other humans can relate to much of the material of her confession. What’s most shocking is the commenters defending chauvinistic treatment as appropriate in said conditions. Look, unless you are literally paying the lady specifically to engage in sexual rapport with you (i.e., a call girl, an exotic dancer giving a lap dance), which perhaps accounts for .0005% of male-female interactions, you are not to assume said sexual rapport is a part of that girl’s job description no matter what she’s wearing (it’s worth mentioning that crossing pre-set boundaries with sex workers — like from agreed-upon flirting to not-in-the-job-description getting handsy — is another epidemic in which some men often seem unable to respect the limitations of the woman’s job description. Stop it!). Point blank; it’s NEVER OK to treat another person disrespectfully. Is that complicated?

On the other hand, a commenter on a Do You Come With The Car blog does make an interesting point about how “there was a time when most of the women working car shows were strictly eye candy and not product spokespeople.” (He provides a fairly extensive and fair evaluation of the practice, it’s worth checking out.)

More from the Auto Show Girl:

Also, because we’re not dumb, we know that one of the reasons we’re there is exactly because we’re attractive and direct your attention to whatever we’re standing next to. I don’t object to being a sex symbol. I object to objectification. When you ask me, even in jest, “Do you come with the car?”, do you know what you are implying? Let me fill you in: that I am nothing more than an accessory to be bought, like 20-inch rims or a stereo upgrade. It’s not cute, it’s degrading. 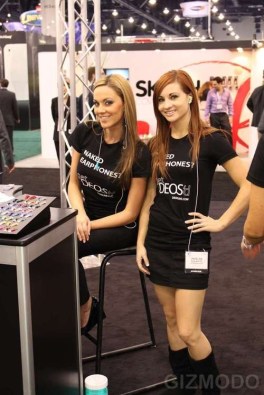 At Gizmodo (91% male readership), the reporters took a uber-awesome approach to their “Booth Babes Confessions” series at the Consumer Electronics Show. They have a video over there and an interview with a Suicide Girl geek working a product booth who even admits how socially awkward she is w/r/t networking amid a story of networking-gone-wrong, which makes our hearts throb for her. The article relates:

“A booth babe‘s job is to lure convention attendees into her booths, to do a product demonstration or to pass people off to a coworker. That’s fine. But when misunderstandings occur—or attendees forget they’re interacting with living, breathing human beings—some attendees turn into jerks, pressing intimidatingly close and crossing boundaries… there wasn’t a single woman we spoke to that didn’t have at least one icky experience.”

[They also remember last year’s debacle when EA even offered rewards to men who snapped photos of themselves “committing acts of lust” with the girls working Comic-Con.]

You know, many of us lesbos see hot girls sexualized in various sexy occupations all the time and manage to resist literally or figuratively humping their legs. (right? or no?) We believe that due to the essential distinction of “power” as a qualifying element of objectification, women objectifying women is not the degrading experience for the objectified as it can be coming from a man. Likewise, genders of persons enjoy objectifying photographs or videos of hot women & men & otherwise-identified persons — because that literally is the commodity being sold (the photo, the video, the tv show). But when we’re human beings talking to other human beings, it’s a different code of conduct, right?

SLOW DOWN: How to build an indoor stoop and why you should eliminate something, from GOOD Magazine‘s “Slow Issue.” (@good)

FURRR: Kelis is upset at PETA and her letter to them on myspace is pretty epic!. (@myspace)

SAME-SEX COUPLE STUDY: If you’ve been keeping up with the Prop 8 Trials, then you know that the body of research on same-sex marriage is unfortunately not as rich as, say, the repository of L Word screencaps available at the simple touch of a button on google. So if you’re an engaged couple or one half of an engaged couple, then this is your chance. Tila you can do it if you really want to, but it would also be kind of weird.

Engaged volunteers needed!
I am looking for volunteers for a study of attitudes towards marriage and parenthood among engaged couples.  The study consists of a 25-30 minute online survey. To qualify for the study, you must be 20-35 years old, live in the U.S., and plan to marry or have a commitment ceremony within the next 365 days. You and your romantic partner must not have children, and this must be the first marriage for both of you.

You can:
-Help a doctoral candidate;
-Increase the pool of scientific knowledge;
-Support research on marriage and families; and
-Spend some time thinking about your relationship!
I am working with Dr. Charlotte J. Patterson, a Professor of Psychology at the University of Virginia.  This study has been approved by the University of Virginia Institutional Review Board #2009025800.

If you and/or your romantic partner are interested in participating or want further information, please email me at survey.couples@gmail.com.  I will send you a link that you can use to access the study. 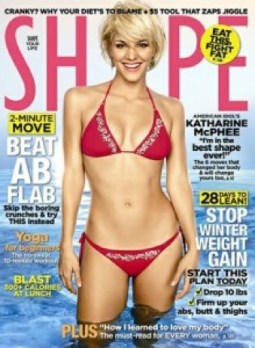 HEALTH: “Pseudo-fitness magazines are like heroin for the eating disordered“. Self editor Lucy Danziger claims that photoshop is used to “inspire women to want to be their best” which sounds crazy because it is. If somebody needs to be photoshopped it’s because there isn’t someone real who actually looks like that. “[Fitness magazines] may be okay for some people, but for those of us who view the world through eating disordered brains, they’re just a pile of dangerous bullshit, a perpetuation of all of the lies our illnesses want us to believe.” (@jezebel)

H8ERS: Our friends at Focus on the Family have just spent $2.8 million for a 30 second spot at this year’s Super Bowl. Apparently the ad is “life — and family — affirming”. Yeah, okay. (@queerty)

DEATH OF PRINT?: Is the New York Times ready to start charging for online content? After a year of sometimes fraught debate inside the paper, the choice for some time has been between a Wall Street Journal-type pay wall and the metered system adopted by the Financial Times, in which readers can sample a certain number of free articles before being asked to subscribe. (@nymag)