Over the last few years, sex toy companies and stores have asked us to review their toys in exchange for, you know, their toys. Today we’re reviewing Fun Factory’s Stronic Surf! 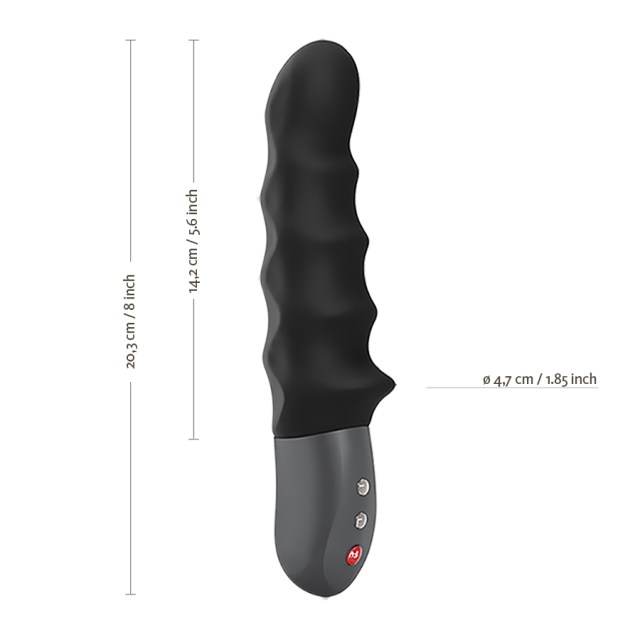 The Stronic line of pulsators is truly in a league of their own; the unique toy design provides not exactly an internal vibrator, although it does feel rumbly, but a weighted motor that provides “hands-free” thrusting all on its own while you or an activity partner’s hands are left free for any other desired activities. The line overall has been a successful one for Fun Factory, and we’ve seen a continued set of additions to it, like the recent rabbit-inspired Bi Stronic Fusion. The new Bi Stronic Surf also brings something new to the table: textured ripples all over the body of the toy for internal “deep massage” as it pulsates.

I actually hadn’t used any of the pulsators before, and was pleased to find the controls feeling intuitive. The red “fun” button turns the toy on and off while also serving as a travel lock, and it’s pretty easy to change speeds or rhythms as the mood strikes you — something I’ve found important with insertable toys, as I think we’ve all already spent more time than we needed to in this life frantically cycling through buttons on the thing buzzing and wiggling inside your p*ssy or that of a comrade. The girth of the toy is nothing to necessarily sneeze at at 1.85 inches, especially because, as previous reviewers have noted about the line, the pulsators are heavy. It’s a really nice weight, actually, and helps make the thrusting motion feel “real,” but you may find you appreciate some lube or some warmup.

Once I was using it to thrust, the sensation does feel great — as is usually the case with toys inspired by a sex act with another person, it definitely does not feel the same; if you are hoping to live out Casper fantasies of getting fucked without a physical presence, you may want to look elsewhere. But it does feel good, for the same reasons that penetrative sex with another person feels good; there’s a lot of good fullness and the weight behind the thrusts does hit the spot.

I feel ambivalent about whether this was a truly “hands-free” experience; our reviewer of the Eins found that “to use it, you basically have to be lying down, with your hand, legs or killer kegels holding it in place tightly enough that it doesn’t fall out, but loosely enough that it can actually move around. It seems to work best when you lie there and try not to move too much, which I suppose is either awkward or good according to your preference.” Perhaps because of the ridges, I didn’t feel any concern about the Surf falling out, and without any hands stabilizing it it definitely stayed in place enough to thrust. It is true, though, that when I stabilized the base with a hand the sensation changed considerably… and for the better. Without any stabilization, the Surf does massage internally, but feels more like it’s rubbing back and forth; when someone holds it in place, it feels much more like it’s thrusting into you — and can be tilted up a little toward the G-spot.

Which brings me to maybe my main disconnect with the Surf, and one that’s completely about me and not the toy — the premise of the Surf according to its product copy is that the G-spot is “not the only spot worth shouting about,” and that the intense ridges of the toy are designed to “massage hotspots along the front and back walls of the vagina, including the often-neglected perineal sponge.” I’m not sure I felt those hotspots, personally — or maybe that if I did, they aren’t, for me, connected to the stated goal of the Surf, which is “more stimulation and bigger orgasms.” I do think the orgasms I ended up having with the Surf (after adding in a hand or another vibrator for external stimulation) were interesting and great, and different than what I usually experience! But at the end of the day I still found myself wanting to feel the Surf’s thrusts more directly on my G-spot, something the basically uncurved toy isn’t really meant for. I did get more sensation when sort of pressing downward on the toy’s base to angle it upward, but certainly not as much as I would with an internal toy with more of a curve to it.

Experimenting with it in this respect also brought me up against the toy’s biggest ridge, at the outer end – the Drei has something similar and the reviewer of that toy described it getting almost stuck behind their pubic bone, whereas I had the opposite experience — that extra tall ridge felt like a sort of barrier and closed me off from the last couple centimeters of length, and I could also feel myself bumping up against it when trying to angle the toy for different sensations.

The Surf really does get at a lot of great combinations of sensation in internal toys, namely the weight and fullness in tandem with the unique pulsating sensation — I’ll definitely be returning to it regularly. For people who know in their hearts, though, that G-spot stimulation is something they love, it’s possible something like the Drei or the G is their forever home among pulsators.