It’s our 48th Autostraddle Anonymous Sex Toy Review! Over the last few years, sex toy companies and stores have propositioned us to review their toys in exchange for, you know, their toys.

This week, one of our anonymous reviewers tried out the Stronic Drei from Fun Factory, available at Babeland. 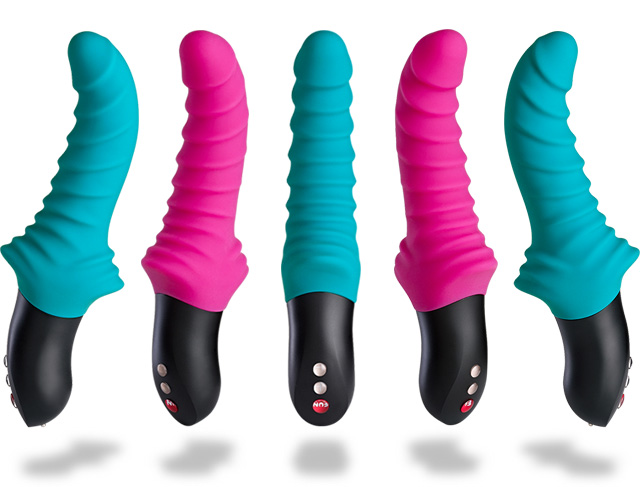 The first week I had the Stronic Drei, I spent about ten hours in bed with it.

The thing that is neat about the Stronic line is that, rather than vibrating, they pulse, which means they more or less thrust themselves inside of you. Instead of a rotating motor, they have a weight that moves back and forth, doing all of the work involved in using a penetrating toy for you and making the pulses really rumbly. It is difficult to overstate how awesome this is.

The Drei is the third pulsator (the others are the Eins, which Autostraddle reviewed, and the Zwei, intended for anal) and stands out from the others because it is shaped for g-spot play and ridged. I found the Drei’s shape way more interesting than the Eins, and also more functional – where the Eins often fell out during use, the Drei goes in and more or less stays there. Unlike the Eins, which I found difficult to keep in place (holding it loosely enough that it could still actually thrust while tightly enough to keep it in place and while trying to keep it in the right spot got old fast), the Drei seemed to get stuck behind my public bone, and was really difficult to remove after I came. The obvious solution was to leave it in place, but at a certain point that became impractical. It also didn’t thrust quite as much as a result – for me, having it stay in place was worth the dampened movement, but if you’re expecting more intense thrusting one of the other two models might be better.

When I reviewed the Eins two years ago, one of the things that bugged me the most was the fact that the sticky texture of the silicone seemed to pick up dust if I so much as waved it about in the air, and in fact after about a year of semi-regular use and scrubbing to get dust and lube off the surface got a little rough. I no longer own that toy so I can’t directly compare, but the silicone on the Drei, though still a lube-eating, dust-attracting monster, is less so. (It still doesn’t come with a storage bag though.)

It has a 16-hour charge time, which I found pretty steep, and lasts a few hours. The “fun” button is separate from the speed/setting controls, lets you turn the toy on and off without cycling through settings, and also acts as a travel lock. It’s also waterproof.

Going into this review, I had actually been skeptical of pulsators because I found the first one I tried frustrating and “like a novelty more than a toy box necessity,” especially for the price. The Drei has me convinced and enamoured.