It’s our 41st Autostraddle Anonymous Sex Toy Review! Over the last few years, sex toy companies and stores have propositioned us, wondering if we’d like to review their toys in exchange for, you know, their toys. We’ve decided to start saying yes to the dress.

This week I tried the The Mason from New York Toy Collective! 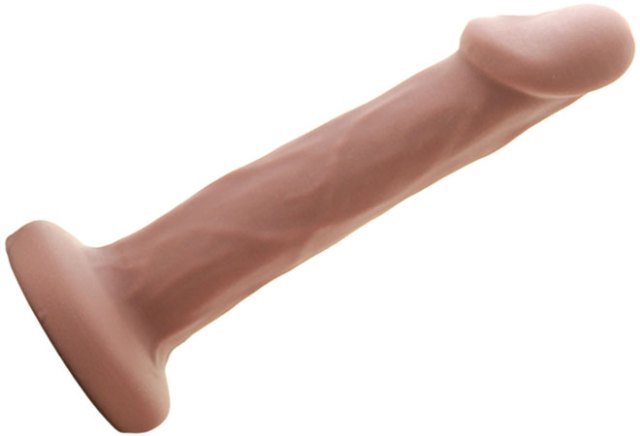 I unwrapped my new toy, plopped in down in the middle of the kitchen table and we all circled around. One lesbian, two straight chicks, me and this enormous dick. One of my straight friends grabbed the Mason. “Wow,” she said, “It’s really… lifelike. I really need to get laid.” We all nodded in agreement. We all needed to get laid.

After the gaggle had headed out I did what I alway do with brand new sex toys: got naked, lubed up and went to town. We’ll get to that in a minute.

Actually, I should have led with that. The most important thing to know about the Mason is that it’s long. Like really really long. Like one lanky motherfucker long. While the Mason isn’t nearly as long as the massive 8.5 inch Outlaw, its length is accentuated by its relatively mild girth; at 1.5 inches in circumference it’s actually no wider than the Shilo.

If you’re someone looking for a deeper fucking but not a wider fuck, the Mason has a clear advantage in that department. Still, the Mason has much to offer all sorts of depths. The great thing about all that extra length is it adds some much needed wiggle room into your dicking.

The great thing about fucking myself with the Mason wasn’t that I was squeezing every last inch of dick into me, but rather that I didn’t have to! I could bend the dick forward and leisurely fuck myself holding the base towards me instead of awkwardly holding the base away from myself like I normally do with dicks. Are you picturing this properly? Imagine like I’ve bent the dick into a U and one side is inside and the other side of the U is outside.

Wait. Here. I drew you a diagram: 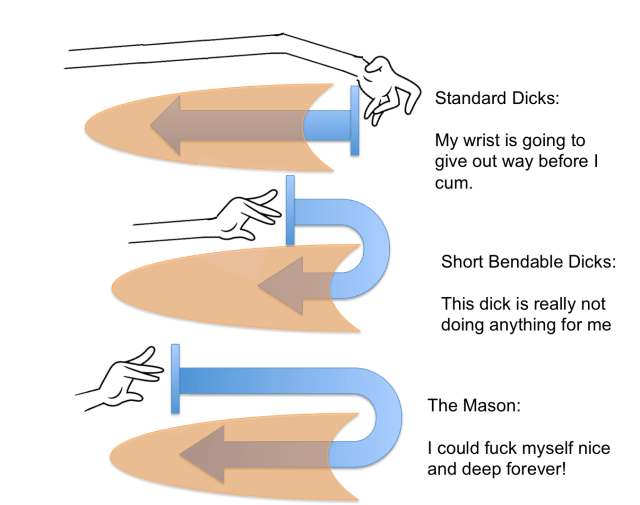 My partner in crime strapped on and we got to business. One of the great things about fucking with the Mason was that it’s so long it never ever fell out. Plus she could get the Mason real deep inside of me, which is particularly great if you’re someone who like stimulation above or below your cervix.

Another fun little Mason trick was that my partner could wrap her hand around the base of the dick to gain stability without losing precious inches. Plus, since she didn’t have to squeeze every last inch in, there was an extra space for clitoral stimulation. She could even wrap her hand around the dick to stabilize it and use her thumb on my clit.

The real place the Mason shone was during doggy style. The vaginal canal tends to lengthen and widen in this position and I’m always left feeling like I want a bit of extra length. Additionally, some harnesses position the dick such that you lose a bit of length when fucking someone from behind.

One final thought from my fantasy world is that the Mason would be just perfect for a little unzip and dip, i.e., fucking someone while fully clothed through the flap in jeans. Like in a bathroom or dark movie theatre or elevator… Just, you know, for example.

I’ll admit, however that the Mason has a few downsides. Personally, for strap on sex, I prefer a dick that is wider and not quite so long. I like to feel filled up but I hate the feeling of having a dick hit my cervix. I recognize that some people like having their cervix toyed with (pun intended) but to me it feels like being repeatedly given a pap smear. In an effort to prevent this pap-smear sensation, my partner remained about an inch away from me during missionary sex, which made me feel a little sad. I like snuggle sex. One part snuggling, one part sex.

My partner in crime admitted that while she loved looking down to see a longer dick she felt like she didn’t have enough control over it. I didn’t notice, but she said she felt like it was flopping about. I asked her if she would ever consider packing and wearing it around for a day and she just laughed at me. She owns and packs with the Shilo but thought if she packed with the Mason it would be a bulge too big to ignore.

Finally, I feel that both the Mason and the Shilo have overly large heads in comparison with the rest of the dick. For me this creates a step off feeling when the head goes in and out. Some people love this sensation, but it doesn’t do anything for me. Also the huge head it makes it really hard to blow the dick.

Remember though, that these drawbacks are just me and my body! You might love the shape and size! It might be just perfect for your body! Everyone’s strapping needs are different and the Mason might be just the perfect dick for you. 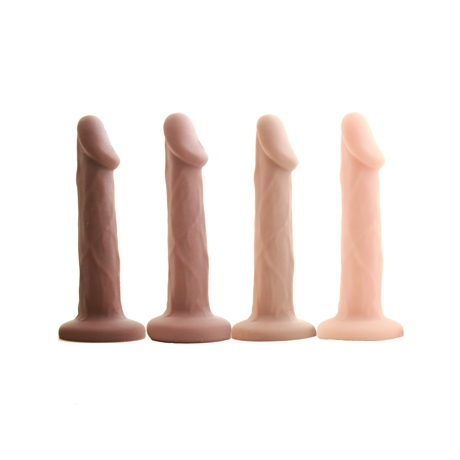 The only universal drawback I could find was that the Mason does not seem as well adapted for packing as the Shilo. This is to be expected as it’s longer. Similarly, while the Mason will definitely bend as long as you hold it, it basically springs back up without resistance. In other words, you can’t bend the tip to curve exactly toward your g-spot and expect it to stay there. 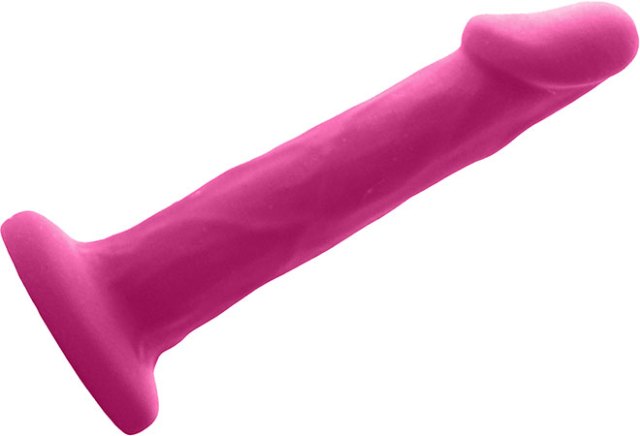 Did I mention it comes in pink?