You guys. I have a crush. It’s a big one, but I can’t help it! She’s such a dreamboat, I don’t know how I’m expected to function normally, I mean honestly. This is not my natural state of being; usually I find a way to move forward one way or another, but this situation is a little extraordinary. I am so over the moon, it’s disgusting. I feel like this stock image of a girl in the rain with a gross green smoothie looking DONE WITH EVERYTHING. 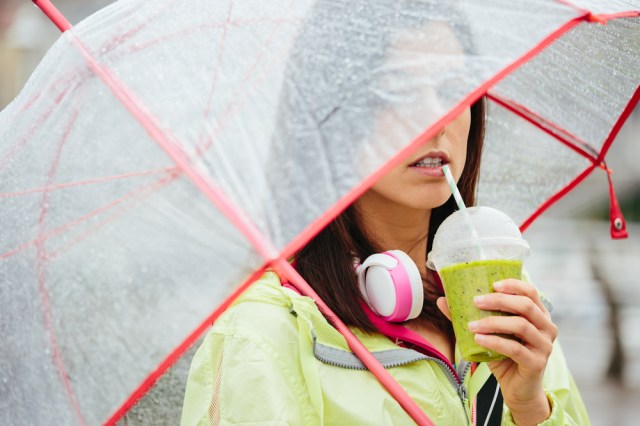 Is it hopeless? Pretty much definitely! But we beat on, boats against the current, borne back ceaselessly into hopeless limerence.

I’ve Got A Crush On Your Dumb Face

I Think I Love You

– The Partridge Family
One Thing

– One Direction
The Purple Bottle

– Animal Collective
She’s The One

– Shonen Knife
I Want You To Want Me

– Elvis Presley
Be My Baby

– The Ronettes
I Wanna Be Your Boyfriend (featuring Angel Deradoorian)

– Angel Deradoorian & Discovery
Can You Tell

– Lykke Li
Drunk In Love – Angel Haze
I Don’t Wanna Dance On My Own (Whitney Houston vs. Robyn) – Chambaland
Drove Me Wild

– Tegan & Sara
Giving Me Away

– Katie Costello
I Wanna Hold Your Hand – The Beatles
The Waiting

– Brandy
Diggin’ On You

– Mandy Moore
There She Goes

– Sixpence None The Richer
Crush on You, or “Good Morning!” an Ode to Steve – Super Desserts

I’ve Got A Crush On Your Dumb Face from Autostraddle on 8tracks Radio.