You had so many thoughtful questions that we decided to divide our responses into several posts. Last month, we answered questions about how hormone therapy affects your sex life, whether or not we believe gender is a social construct, and much more! In this second installment, we discuss topics like “undoing” the effects of puberty, intimacy with a trans* person, and how to address gender ambiguous people. 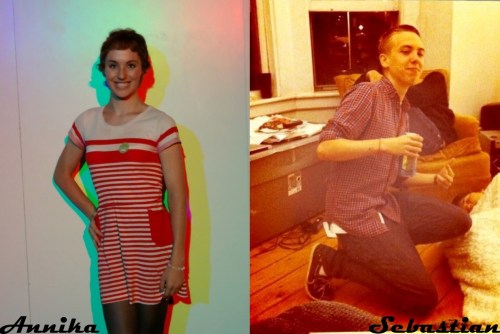 Q: Did you transition before or after puberty? How did your age affect your transition?

SEBASTIAN: I transitioned when I was 21 and 22. I went through “female” puberty. Most of our differentiating sex characteristics develop during puberty – these are called secondary sex characteristics and for males typically include genital growth, increased body and facial hair, deepening of the voice, etc; for females these typically include breast development, fat distribution to the hips and bum, etc. So if you transition before all these pubertal developments occur, you can avoid developing some of the secondary sex characteristics that many trans people ultimately work at “undoing” later in life. A perk for me would have been that if I had not gone through female puberty, I’d be taller!

On a non-physical level, I transitioned at the perfect age. I’m at THE transitional stage in my life, right now after all. I began social transition at the start of my senior year of college and had begun medical transition by the time I graduated. I essentially was able to start a new chapter of my life with a new identity. I didn’t have to transition on a job; I didn’t even have to apply to jobs before I was legally Sebastian and legally male. 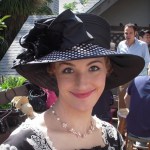 ANNIKA: I took my first estrogen pill when I was 16, upon discovering a bottle of estradiol in my grandmother’s medicine cabinet. I didn’t take my second dose until this February, at the age of 23, well after I had gone through male puberty. Thankfully, I seem to have survived what I call “testosterone poising” relatively well. I’ve always had pretty delicate features, and you would never describe my appearance as “manly”, even before I came out as trans. My natural speaking voice fits comfortably in the female range as well. But developing male secondary sex characteristics has certainly made transitioning more of a headache than it would have been had I not waited seven years between my first estrogen doses. While I was never capable of growing anything resembling a beard, I still have to go to electrolysis sessions twice a month to remove what facial hair I did have. I probably won’t be completely done with electrolysis until sometime next year. At $80 an hour, it’s definitely the most expensive part of my transition!

Age is important for trans* women- the effectiveness of estrogen almost always depends on how old someone is when she begins HRT. I’ve often heard that there is a  “window of opportunity” (up to around age 25) in which hormones will have the greatest impact- the idea is that your body is still receptive to hormonal changes in the few years after finishing puberty.

Although I started a couple years after Sebastian, I definitely think that this is the perfect time in my life for me to transition. Moving to San Francisco last summer gave me the chance for a fresh start, away from the college environment where I felt trapped in my assigned role as a boy. I have a good job and I’m financially independent- something that proved to be crucial when my parents disowned me after I came out.  I wouldn’t have been able to graduate if they had cut me off when I was still in college. I did have to transition on the job, but it really wasn’t as awkward or difficult as I feared it would be.

Q: What happens if/when someone chooses to not fully transition? I mean, that happens sometimes, right? Like if someone can’t afford surgeries or get them for health reasons?

SEBASTIAN: We don’t really use the terminology of “full” transition, because a full transition means different things to different people.  Sometimes people don’t have all the surgeries or procedures or medical interventions because of financial reasons, but often times it is because not every trans person needs or wants every type of medical intervention. For example, some trans men do not feel uncomfortable about their “junk” and elect to not have bottom surgery. Same with trans women. Some trans men do not feel they need testosterone to live as men and do not undergo Hormone Replacement Therapy. Many trans women are satisfied with the effects of estrogen on their chest and do not have breast enlargement surgery. Et cetera et cetera. One of the truest things about the trans community is that each individual’s identity and transition needs are unique to them.

ANNIKA: The term “full transition” is problematic because there are no strict metrics by which to measure it. It also plays in to the false assumption that all trans* people desire the same thing: full sexual reassignment surgery. It’s true that the cost is often a barrier for those who do want it, but there are many other reasons why someone might not want to have SRS. Like Sebastian said, many trans* people are comfortable with their genitalia and don’t view it as a source of dysphoria. There are also potential risks to consider, including incontinence and the inability to experience orgasm.

Even hormone therapy is not universal. I know one girl who decided to transition without any medical intervention, and another who decided to take estrogen but not testosterone blockers because she wanted to maintain her high sex drive. My doctor told me that in some cases a person will reach a point where they are satisfied with the results of HRT and choose to discontinue further treatment. The trans* community is quite diverse- and the meaning of transition can vary greatly from one person to the next.

Q: What should I expect the first time I’m intimate with a trans* person of any gender? Should we talk about it first? Are things the same? What about people who are pre-op, for example – should I ignore or pay attention to genitalia?

SEBASTIAN: Yep, you should talk to them, or let them lead. I mean, the right answer here is you should talk about it. You should always talk to partners before you have sex with them. Find out what they’re comfortable with, what they like. But real talk, some of us don’t like to talk about that stuff out loud. I admittedly have never been like “Okay this is what I like and don’t like and please don’t do this and this is why.” Most likely, someone who is really specifically uncomfortable with parts of their party (as many pre-transition trans people are) they will identify what are often called “no touch zones.” Otherwise follow their lead. Say “I’m going to let you lead” and check in with them regularly – “is this okay” “do you like this.” Spice it up “show me what you want me to do.”

Something that might be worth discussing if you like to you know talk during sex is how the person wants their body and their sexual parts talked about. Many (not ALL) trans men like you to call their genitalia (even pre-op or non-op) dicks and their chests chests.

Every trans* person is going to have different discomforts (and some might not have any) just like any person you have sex with is going to. The sex might be different than what you’re used to, might not be so different after all.

ANNIKA: This isn’t something that I’ve needed to worry about yet, since my girlfriend and I had already been dating for nearly three years when I came out. But I have to agree with Sebastian- good communication is key. The stereotype of the “big reveal”, in which someone doesn’t disclose their trans* status until the clothes come off, doesn’t happen nearly as often as some movies and porn would lead you to believe. Discuss things first. Let your partner know that you’re receptive to their needs and allow them to tell you what they’re comfortable with. When in doubt, just be affirming of your partner’s true gender, whatever that may mean in the situation at hand. There’s no manual for “sex with a trans* person”, since each of us has our own individual preferences in bed, just like anyone else!