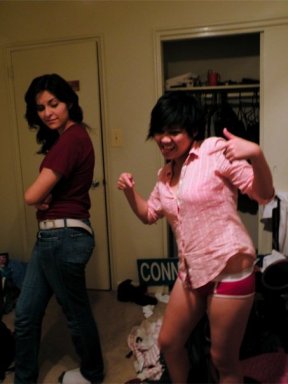 LAUREN: You guys, I’m a real lesbian! I think U-Haul jokes are trite but true, I can’t help but make cooing sounds at babies and small animals, I love Tegan and Sara like whoa, and oh, right, I like girls. I’m just like any other lesbian – but I don’t believe in monogamy.

KATRINA: A lot of people right now are beginning to see a shift in the definition of what it means to be in a relationship, and that definition is no longer contingent upon monogamy. The concept of polyamory is nothing new, of course, but the concept of serious, loving, and functioning relationships that are also sexually open sometimes seems to be.

LAUREN: Because let’s face it, most of us can’t really seem to get down with the idea of a true, real, loving, and open relationship. I’ve been there! I used to be one of those preachers too: monogamy and self-control and don’t you ever think about cheating. What’s in your pants and what’s in your heart are intrinsically and irrevocably connected, because that’s what it means – and all it means – to love someone, right?

KATRINA: I get it, the idea of straying from monogamy is scary. I know that when Sara Quin first sang “I’m not unfaithful, but I’ll stray,” all of our lesbian hearts stopped as we resigned ourselves to believing that if Sara Quin didn’t believe in monogamy or happily ever after, then none of us ever had a chance at falling in love again. Ever!

It’s no surprise that we feel this way. “Monogamy” is most relationship’s #1 Rule. Straying from that is like falling down a slippery societal slope which eventually leads to women getting the right to vote and gays wanting to get married.

“Coming out as non-monogamous isn’t just about sexual freedom, it’s about sexual honesty. It’s important to us not just as queer women, but as WOMEN. Men have monopolized the idea of multiple sexual partnership for all of time…”

We are inclined to cling to monogamy as the defining factor of ‘serious relationships’ because society values it above all else. It’s more important than trust, honesty, stability, reliability, or emotional availability. But why do we prioritize ownership of our partner’s bodies/sexualities over the social & emotional tenets that construct a strong partnership?

LAUREN: My new outlook on relationships has been vague and life-changing, kinda like when I came out to myself as a non-hetero. ‘Monogamous’ is yet another mold I don’t fit into, and its one that I’ve been trained to see as wrong, immoral and just plain “unnatural.” And if you do do it I, you’ve gotta be a gay man, because they’re the only ones who can get away with it.

KATRINA: But our generation is on the cusp of breaking through a lot of the pre-supposed molds of gender binaries and sexualities. Sometimes it’s not “which gender you’d rather do it with” but “who shouldn’t you be able to do it with?”

LAUREN: In retrospect I think my feelings about non-monogamy were similar to the vitrolic feelings I had towards homos as a kid before figuring out I too was a little babygay. Sometimes it’s easier to hate from far away than it is to be honest with yourself and manifest that in your relationships.

KATRINA: Much like coming out to yourself as queer (I hear a lot of us around here have done that), coming out as non-monogamous isn’t just about sexual freedom, it’s about sexual honesty.

It’s important to us not just as queer women, but as WOMEN. Men have monopolized the idea of multiple sexual partnership for all of time: from the pre-feminist acceptance of men having mistresses to how lesbians have been repeatedly left out of same-sex couples’ polyamorous movement. We’re mired in ideas like “men want to fuck, woen don’t.” “Boys will be boys.” But it’s not fair to ignore this desire in women.

Sex does matter to us. It’s not an obligation and it’s not for procreation, and we do it for love, yeah, but we do it for fun too. ‘Cause it feels good, ’cause we wanna, and ’cause we can.

LAUREN: I find that many of my lesbian coupled friends become codependent on one another, because in lesboland it’s totally accepted and somewhat part of the culture. For lots of relationships that go that way and eventually end, having a more open relationship seems like an easy way to slowly let go while weirdly simultaneously hold on. It seems that a lot of lesbians think about open relationships like this, because they’ve either done it or seen others do it. 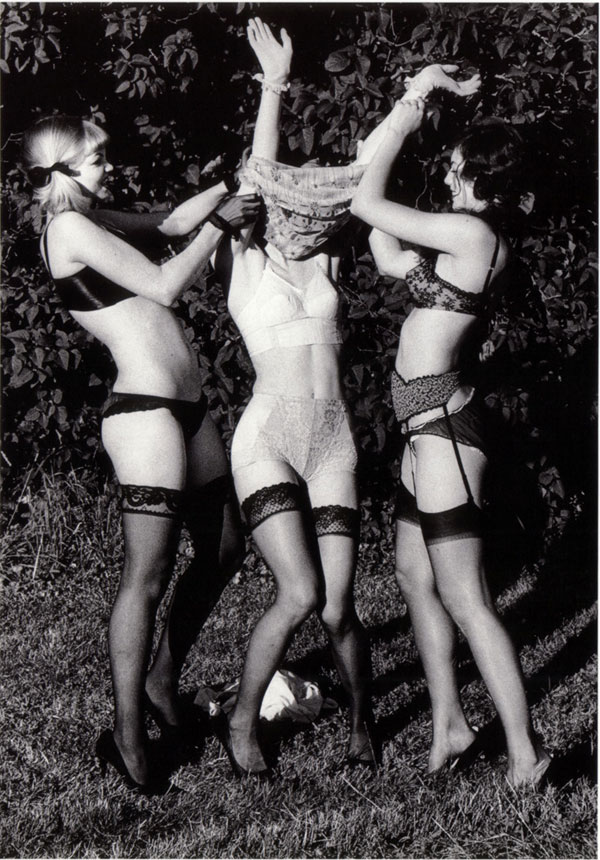 KATRINA: But we’re allowed to want things, and not just want them, but expect and even demand them in a partner, whether that partner be sexual, emotional, romantic, or anything between/beyond.

LAUREN: If you don’t fit into the box, it’s okay to let yourself out of it. And it’s okay to stay in the ‘box’ if that’s what makes you happy. I’m not saying there’s anything wrong with monogamy; just that we’ve observed that the pressure put upon it makes room for some nasty things, like being overly possessive and jealousy.

It’s socially acceptable for women to feel jealous and consequently be possessive, especially of another woman. I’d rather not dictate to my partner who she should be attracted to.

KATRINA: By nature, monogamy is insistent upon jealousy and structured according to what we feel are unrealistic expectations of yourself and your partner. There’s more room to focus on building a secure, lasting relationship when it’s not bound by or founded on obligation or a denial of attraction.

Questioning monogamy is scary! It means you’re questioning what you feel about love and sex and how you feel about your body, your relationships and your desires, and how your partner feels about these things for themselves. in a relationship, questioning what you want means questioning if you’re wanted. It’s not just about my desires. It’s about her’s, and whether theres’a  double-standard at play. You have to be totally honest with not just your girlfriend but yourself. ‘Cause as much as you may not want to watch your girlfriend wanting someone else (or maybe you do), at some point I recognized that I wanted it to.

There’s a difference between expanding the borders of a relationship and using openness as an excuse to run (run, run).

“We finally had a conversation about how we both found the same girl attractive, and admitting this out loud to each other brought us closer, actually, rather than jealousy pulling us apart.”

LAUREN: I actually ended up in an open relationship on accident. Me and my partner let an elephant out of the room when we finally had a conversation about how we both found the same girl attractive, and admitting this out loud to each other brought us closer, actually, rather than jealousy pulling us apart.

Things opened up. We saw each other as people with independent sexualities instead of just each other’s girlfriends. Of course it was more comfortable to tell myself that she only wanted me, forever & ever, and that we’d live happily ever after, but that would be lying to myself about what I really wanted and about who she really is.

KATRINA: It’s not easy, obviously, to think about deviating from monogamy. Monogamy has its merits. It provides a lot of security, but that security can come from places other than sexual exclusivity when you’re focussed on building a comprehensive truth and trust in partnership.

Exploring polyamory for me is almost like exploring a new kind of queerness. It’s acknowledging that there’s more than one or even two ways to look at what a relationship can be. It’s not monogamy vs. polygamy just like it’s not gay vs. straight. It’s various personal experiences and interpretations of how we feel about love and sex and magic (baby).

Of course, there’s a difference between theory and execution. It’s easy to understand your partner’s attraction to someone else and to know how important you are to them and how much they love you, but it’s hard to see it happen and not feel jealousy. But let’s face it: the only good jealousy ever did anyone was to name Tegan and Sara’s fourth studio album.

So it’s okay to think that open relationships might be scary. Being scared of deviation from monogamy is like feeling like The L Word is a legitimately well-crafted show: at first you feel morbidly curious, then transfixed, then reflective upon your own sexuality, and finally you realize that most of what you were preoccupied with really didn’t make any sense anyway. See, it’s the same!

But the concept of an open relationship shouldn’t be scary. Because when it comes down to it, it’s nothing more than another interpretation of what a relationship could be like; it’s just another way to deviate from the norm – and we all know what that’s like, don’t we?

We shouldn’t expect to get non-monogamy right the first time we try to understand or execute it. We still might not get it the second time, or even the third. But maybe it’s not because monogamy is the only way that works, but because there are an infinite amount of ways for relationships to succeed or fail or rework themselves before it’s right.

We as a culture have evolved so many times in only the last 60 years, from the ultra-gendered heterosexuality of the 1950s to free love of the 60s and 70s to the androgynous sexuality (and cone-shaped bras) of the 80s. We act and feel as if this whole time there has only been one way to interpret relationships and sexuality, but in reality or perceptions are changing rapidly and regularly.

This is the generation in which it’s becoming possible to grow up gay. To be able to come out and live without alias or excuse. Maybe our sexual revolution is a revolution of exposure and presence. And although the ultimate goal that some chase is normalcy, we are in a period now where being out means that sex and sexuality are intrinsically tied to your identity, whether that’s the way you perceive it or the way others perceive you. Being gay forced us to honestly consider the possibilities of our sexualities; being non-monogamous forces us to honestly consider the possibilities of our sexualities as they relate to others and re-evaluate the forces that make our partnerships special and honest above all else.

It’s not the easiest choice to make, and it doesn’t make sense to everyone. But it’s something to consider…y’know, if you’re into that kinda thing.