Welcome to the ninth episode of American Horror Story, the show that has simultaneously lowered and raised the bar for television everywhere. Is this show ridiculous? Of course! Am I at all interested in watching TV shows that DON’T feature a talking severed head of Kathy Bates? NOPE NOPE NOPASAURUS REX!

This show has ruined real life for me, you guys. Like, if the four horsemen of the apocalypse appeared before me (and Riese wanted me to recap our imminent demise) I would take an iPhone pic, write something like “Neigh Girl Neigh!” underneath, and then take my place alongside all the other doomed souls.

This week’s vocab word is: shoinks! It’s a combination of “shit!” and “yoinks!” Spread it like wildfire.

We open on father and son campers in the woods. It’s 1991. Turns out it’s Baby Hank and his dad, who are on Hank’s first witch hunting trip. Is this how men bond? 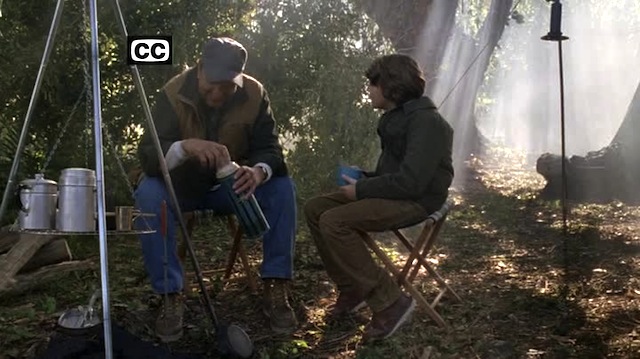 Mom had to stay home because her menses attracts bears.

Dad tells Hank not to be nervous, and gives him a rifle bigger than he is. Apparently they’ve been hunters for generations, killing witches, upholding the patriarchy, driving the priestesses of Avalon into the mists. You know, just bro-ing out. 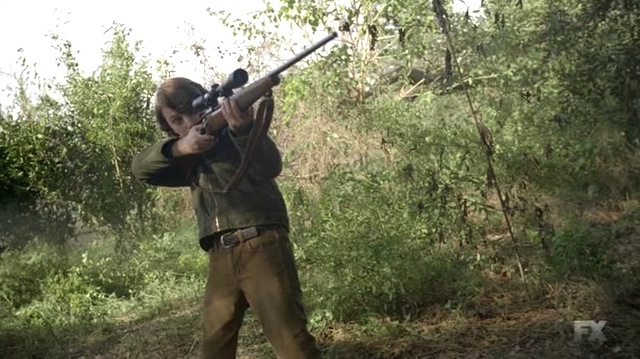 Kid, you are no Carl Grimes.

Soon, a bedraggled looking woman stumbles out from the brush, begging Baby Hank not to shoot her. Dad screams at him to gun her down, and Baby Hank chokes, because he’s a fucking child and not a soulless killing machine. 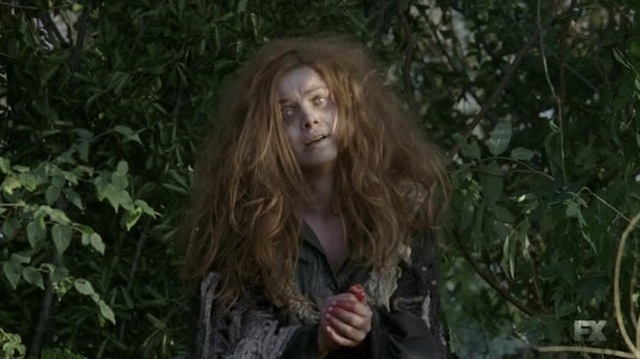 I got lost at the 1993 Michigan Womyn’s Music Fest and have been wandering the woods ever since.

The witch casts a stream of fire at him and Dad runs and saves Baby Hank, getting mighty singed in the process. Dad shoots the witch and tells his son to have no mercy, to never forget what they are, and to maybe get some aloe for his extra crispy hand. 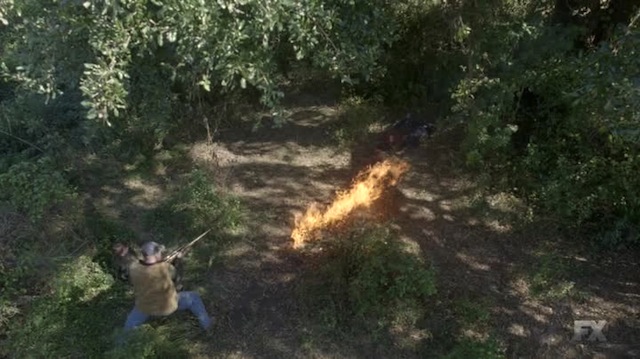 South Coast Boutique is having a fire sale? 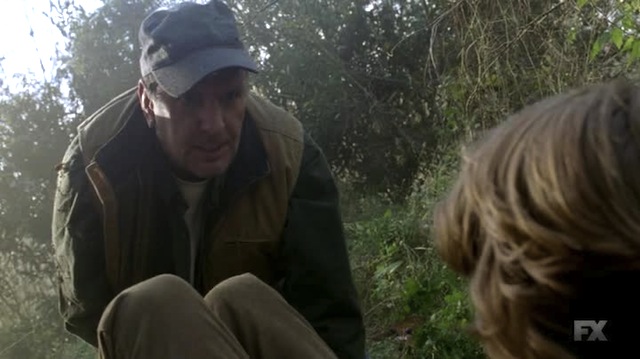 And that’s why you don’t yell in the house!

Over at Marie Laveau’s salon, ladies are getting their hair done while Queenie works the phones. Their busy day is interrupted by (Golden Globe nominee!) Fiona and her (Golden Globe snubbed!) cardboard box of Delphine’s head. 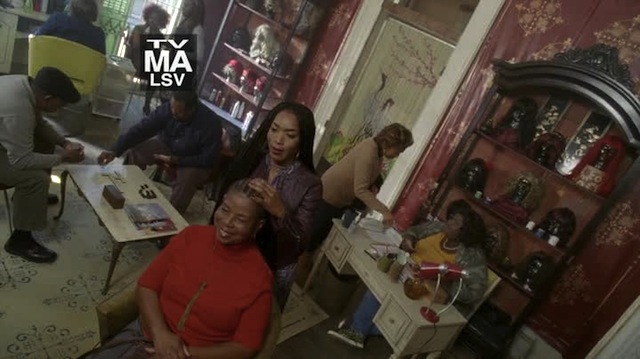 Fiona tells Marie that they need to talk, what with the war on witches/witch hunters/revived Christians, etc. Marie refuses to talk to her, but then remembers that health inspector rule about severed heads in the work place and ushers her into the back room. 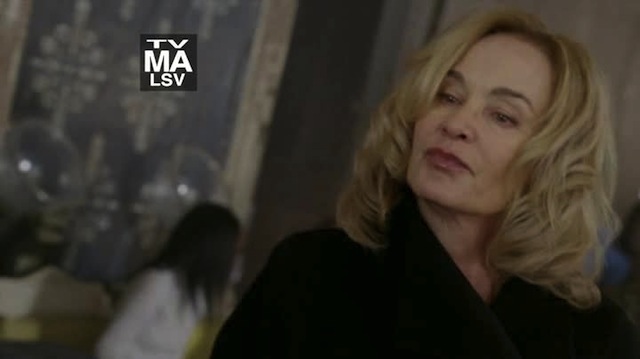 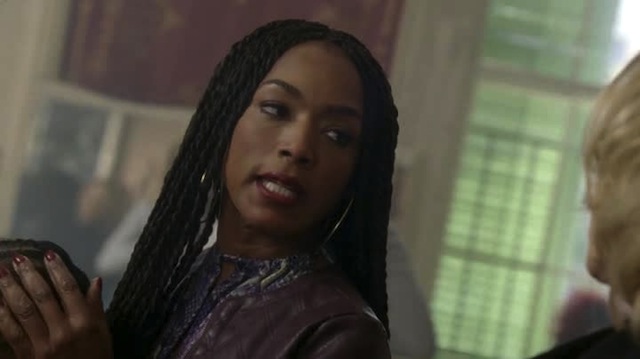 “Shut the fuck up” face 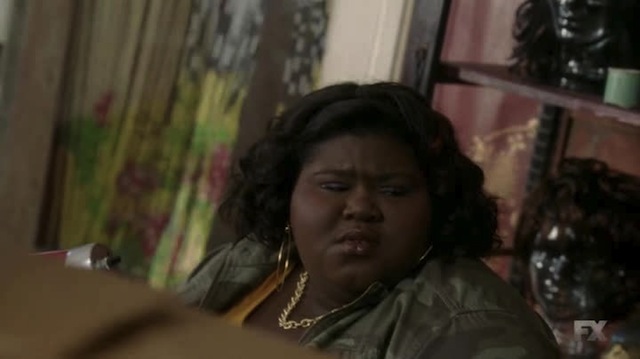 “Who did I leave hanging on line 3?” face

They adjourn to the back room, where Delphine’s body is still chilling in her cage. The body waves half-heartedly at Fiona, who looks appalled. Marie tells Fiona that since she dug up Delphine, she’s her problem. Ah, the old “finders keepers losers weepers” rationale. 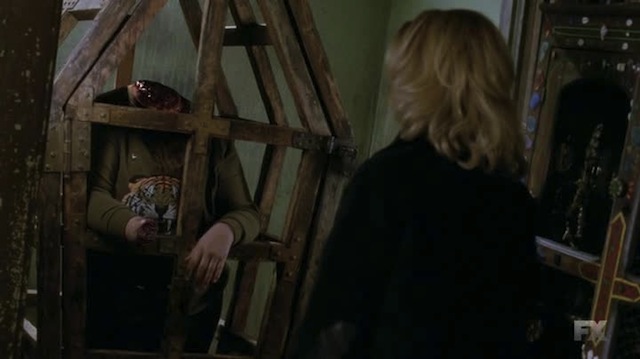 Wow, remember back in episode one when Fiona just dug up Delphine to get her beauty secrets? Was this show ever so young? 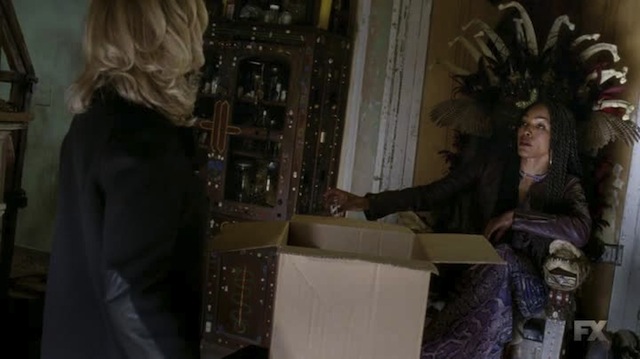 One, cut a hole in a box. Two, put Kathy Bates head in a box.

I don’t know, Marie. As an over-privileged Caucasian, I consider myself an expert on white girl problems. They usually involve adderall, skiing, and Taylor Swift, right? I feel like witch murder is maybe an everybody problem.

Throughout this whole conversation, Delphine’s head has been providing color commentary from the box, and it’s hilarious. Fiona has to jam some stuff in her mouth just to shut her up. 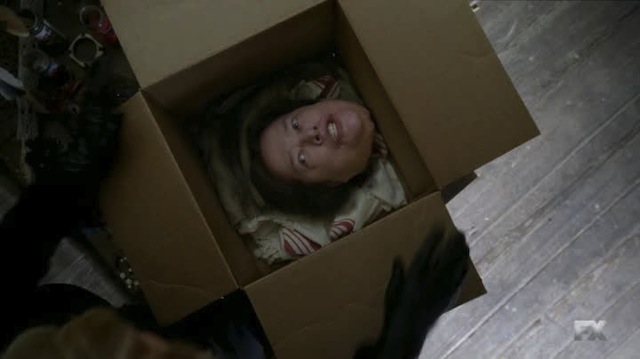 This year, Santa is switching from coal to severed heads. Merry fucking Christmas.

Marie tells Queenie to take the head out back and burn it in a fire. Delphine is psyched to maybe possibly finally die. Fiona leaves behind the head and any hopes of an alliance.

Meanwhile, back at Miss Robichaux’s Obstacle Course for the Recently Blind, Cordelia is banging around the kitchen and trying to cook some eggs. I know that all the help is gone, but can’t Nan or someone take five fucking minutes and make this woman an omelet? 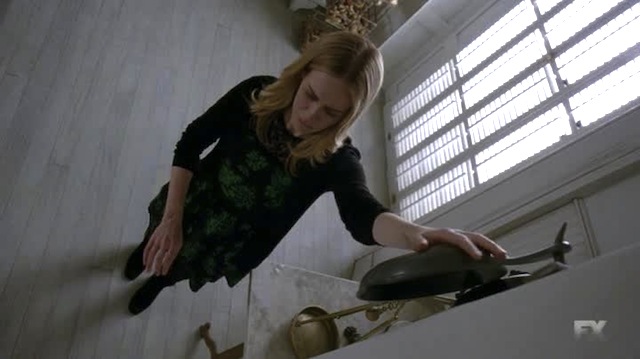 Nan, is that you? You’ve grown so tall and cast iron!

Luckily Myrtle is there, and she watches Cordelia break all the eggs and stumble around like she’s Mary from Little House on the Prairie. Cordelia even says the following: “Could people please not move things? Some of us are blind!” I believe that was the first thing Helen Keller signed to Anne Sullivan. 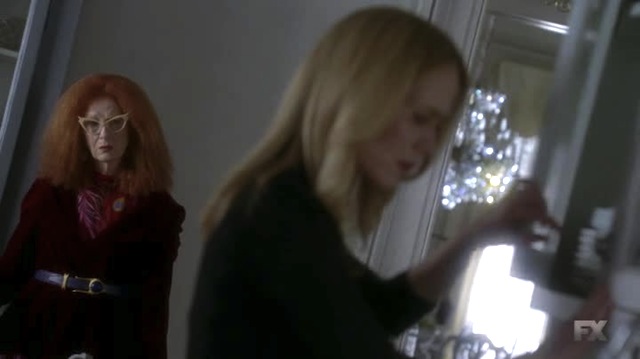 Should I tell her she’s cooking with the rat poison? No, it’s the only way she’ll learn.

Myrtle goes to help her and tells Cordelia that she wasn’t the one who blinded her. We see a flashback of Young Cordelia being ditched at Miss Robichaux’s by Fiona. Myrtle takes her in and raises her like her own daughter, and it’s really sweet and touching, which is an emotional note that AHS almost never hits. 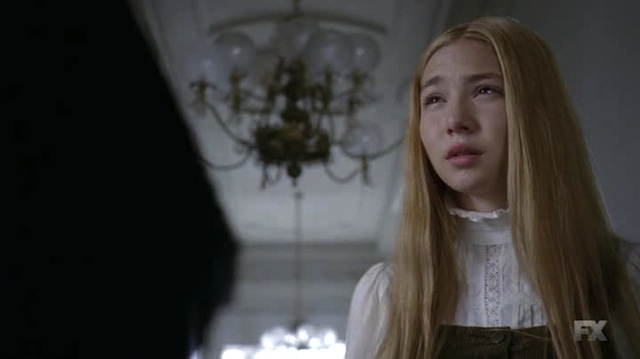 Where did my mother go? 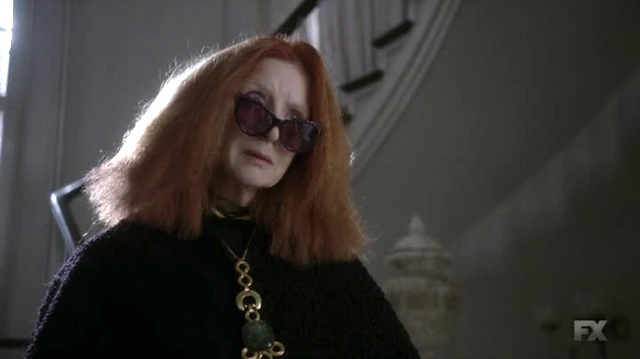 BTW, how cute are Myrtle’s glasses in this episode? When I’m old I’m just gonna go full on crazy and wear all the shawls and fingerless gloves and cat’s eye glasses and embarrass the shit out of my children. 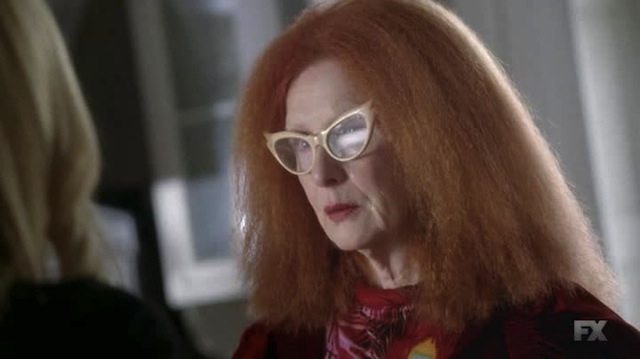 Portrait of the recapper as an older woman

Anyhoo, Cordelia doesn’t need her magic sight to know that Myrtle loves and cares for her. Myrtle tells Fiona that she’d pluck out her own eyeballs to give her sight again. This is what we in the “biz” call foreshadowing.

From there, we wiggle our noses and hop on our broomsticks and fly on over to Atlanta to a big fancy pants company called Delphi Trust. Hank is there to meet with his dad, who owns the company. Turns out that dad held that old hunting trip faux pas against Hank, and denied him a seat on the board. Furthermore, Hank is in fact a low-level witch hunter whose only job is to collect intel from Cordelia. 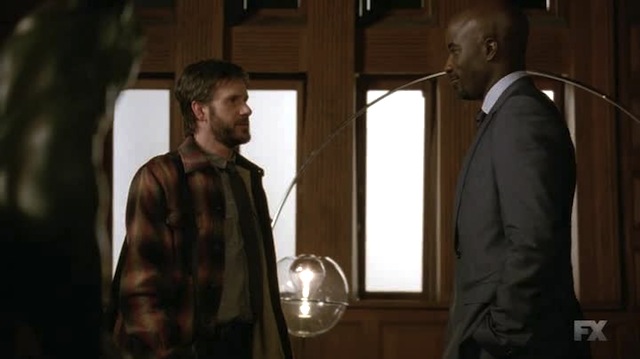 Unfortunately, Hank has been going rogue, what with the Marie Laveau alliance/unsanctioned hotel witch murders/general douchery/unwillingness to wear non-flannel shirts. Poor Hank cowers under his father’s glare; he has nothing to contribute to the witch hunting or the multi-million dollar corporation… which does what, exactly? Manufacture silver bullets?

Adding insult to injury, Hank finds out that it was his dad who authorized Cordelia’s blinding, as a way to make her more dependent on Hank. Whoops, that backfired like whoa. 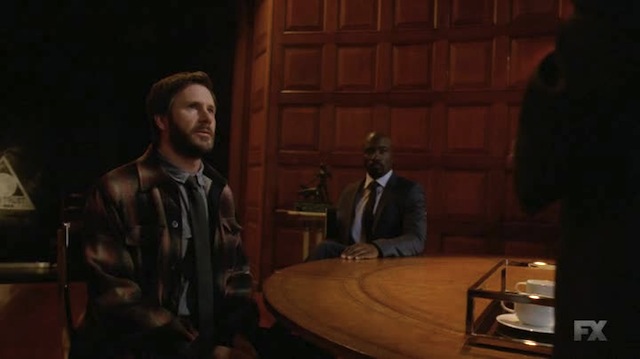 So twenty spanks with the paddle and then I’m in the frat, right guys?

Hank is upset, what with his real love feelings for Cordelia, and his dad immediately yells at him about losing himself in the lie/she’s a witch/no girls allowed blah blah blah this is boring. 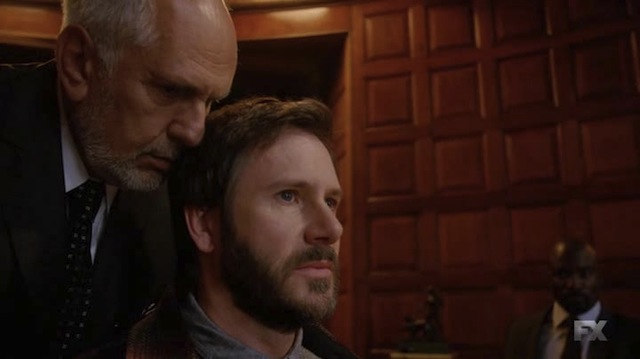 Is that Head n’ Shoulders?

Meanwhile, back at Miss Robichaux’s School for the Culinary Arts and Crafts, Myrtle is fawning all over her new melon baller and serving lobster to Pembroke and Quentin. 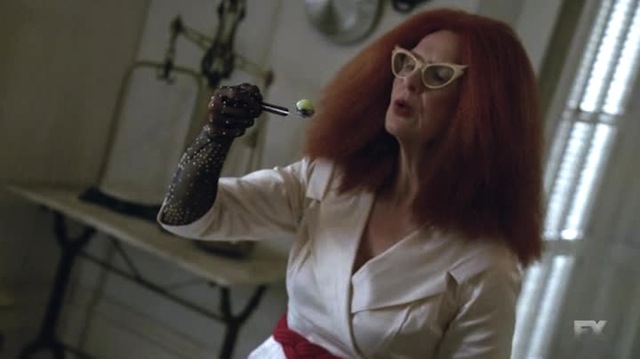 I guess you could say I’m a baller, shot caller…

This is surprising, as the last time they saw her they burnt her at the stake. But they’re totes sorry about it, so it’s cool, right? 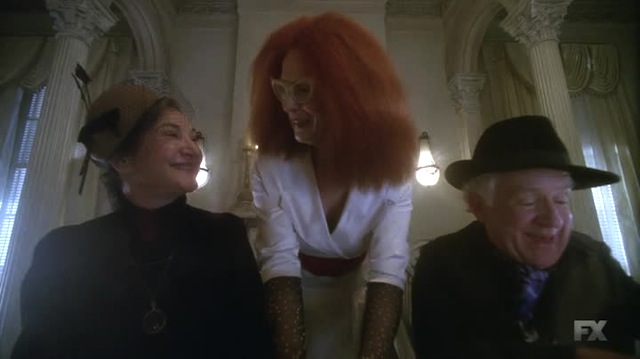 And then we were like, “ooh sick burn!” because you were on fire, get it?

Anyway, Myrtle is looking fresher than ever and the lobster is a-flowin’ so let’s let bygones be bygones! They try to toast Myrtle before succumbing to poison because this is American Horror Story and this is how they roll. Turns out that Myrtle gave them a paralyzing drug, so they are totally helpless when she takes that melon baller and scoops their eyeballs out.

You guys, SHE MELON-BALLERED THEIR EYES OUT! THIS IS A SHOW ON TELEVISION AND THIS IS THE WORLD THAT WE LIVE IN! 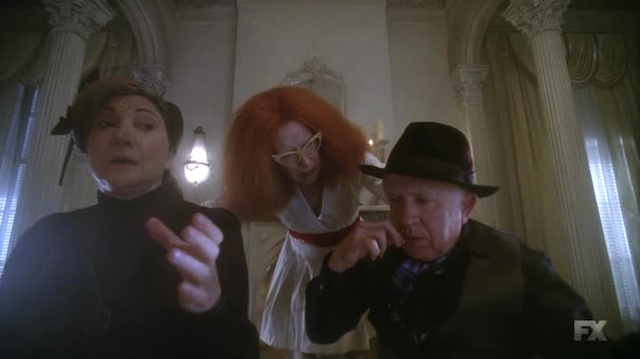 Myrtle takes those freshly melon-balled eyes and magicks them into Cordelia’s face, and abracadabra Cordelia can see again! Myrtle gave her one blue eye and one brown, just like a Turkish angora cat she used to own. Lezziest spell ever, right? Myrtle could pull Ellen and Portia scissoring out of a top hat and it would still be less gay than this spell. 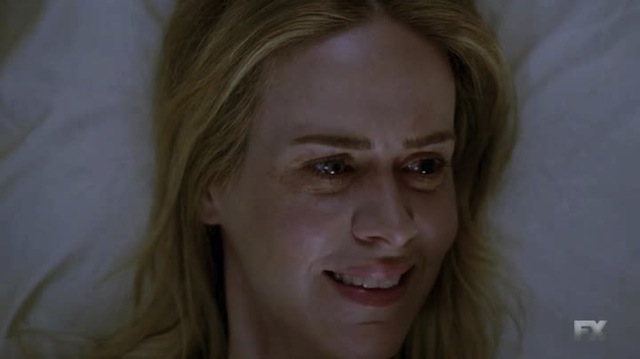 Awesome! I always wanted to look more like your cat!

Fiona arrives at the school and overhears Cordelia telling Myrtle that she can’t just go around jacking eyeballs. Myrtle equates it with throwing a drowning man a life preserver, which is totally the same thing… if that life preserver was made out of the intestines of your former colleagues. 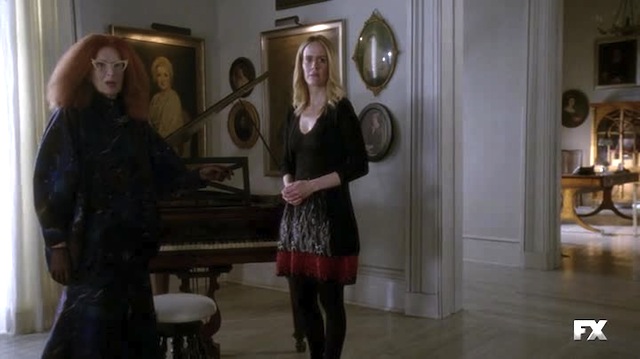 And I see no one has been playing the piano forte in my absence!

Fiona is awestruck to see that Cordelia’s sight is back, although she balks at the mismatched eyes. I guess someone’s a dog lover. Fiona and Myrtle start bickering and Fiona calls her a charcoal briquette, which, LOL. When Fiona asks about the origins of the eyeballs, Myrtle jokes about anonymous donors, and we see a quick scene of her hacking up the bodies and yukking it up like a nutbag. She also says that the council isn’t seeing anyone right now because EYEBALL PUNS! All of the shoinks. 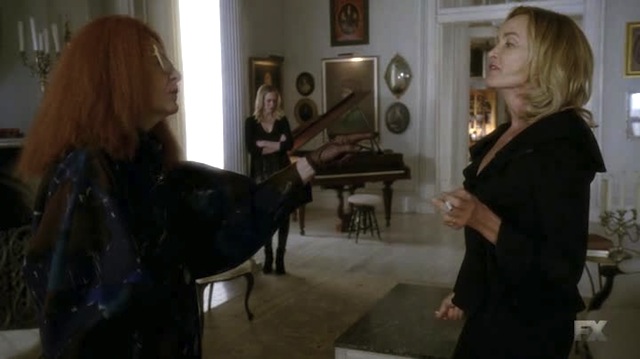 “Eye” killed them! Get it? Get it? Because I ripped their eyes out.

Cordelia has had enough and tells them both to shut the fuck up and get over their drama. This means that Myrtle has to respect Fiona as the Supreme and that Fiona can’t threaten Myrtle with banishment to Pyramus, New Jersey. I would totally watch a show about a wacky witch banished to New Jersey, BTW. 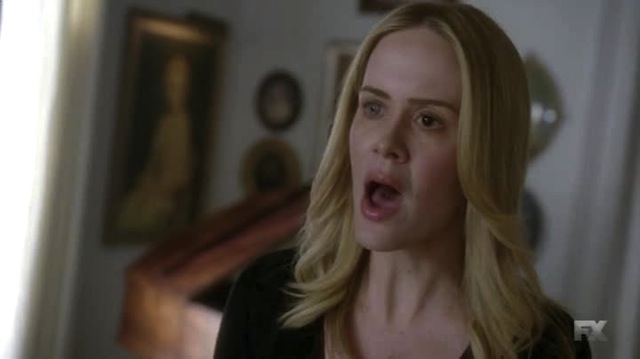 Cordelia reminds them that the real danger is outside the school, not inside it.

Here’s a quick tally of the dangers found INSIDE the school:

GREAT JOB CORDELIA THIS PLACE IS SAFE AS HOUSES.

Cordelia goes to take a nap and hugs Myrtle. That’s when she realizes that her magic sight is gone. Oh well, two eyeballs forward, one step back. 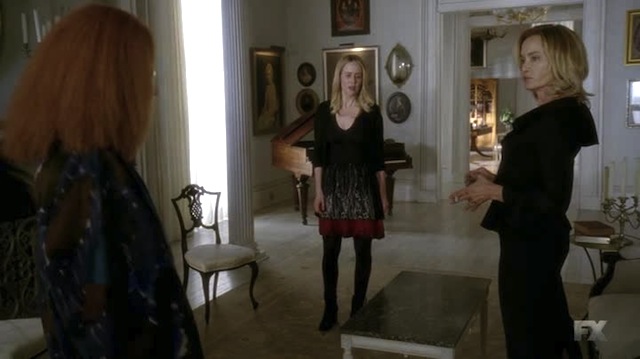 I’m gonna rest my eyes, try not to hate-sex all over the parlor