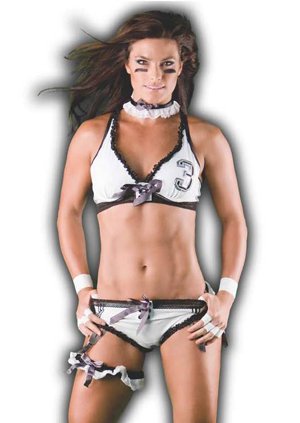 As we all know, not every lesbian or straight person is a football fan. But maybe, juuuuust maybe, you could stand it if you knew that out on the field was an intelligent, hard-working, super fit lady who likes ladies. Oh, look what we found. A LADY JUST LIKE THAT. Her name is Amber Elizabeth. She plays in the Lingerie Football League for the Los Angeles Temptation whom she calls “the best looking team in the league.” When she’s not busy winning the 2011 championship with her team, she is a fitness model and personal trainer.

You might be wondering what good this is gonna do you? With your luck the only time you’ll run into the lesbian footballer of your dreams is while getting granola from Trader Joe’s in your pajamas. But wait, Amber and her teammates will be at Girlbar’s Dinah Shore Weekend? We even have the date and time? Now you can “coincidentally” wear your cutest top at the right moment!

The best part is that Amber, along with other members of  the L.A. Temptation, will appear live in Palm Springs during Girlbar Dinah Shore on Sat. April 2nd at the Wet n’ Wild Pool Party happening at the Hyatt’s upper pool deck. Doors open at 9am. You obviously need to buy those tickets now.

Want to get to know Amber a little better? Oh, we’ve got you covered.

Brittani: Congrats on the championship! How did you end up trying out for the team?

Amber: Thank you! I was home visiting family and a friend mentioned the league. I called my best friend to see if I should go to tryouts and the response I got was, “If you don’t go I might punch you in the face.” They know how much sports mean to me.

You played wide receiver and corner this year. Do you prefer one to the other?

I like playing defense, so cornerback. I have more of an ability to see a play develop. My reaction time is pretty quick because of basketball. I do play receiver, but they tend to make me run the ball a bit more. But I’m not afraid to run and get hit — I really get into it so I’m okay with getting pummeled.

How did your friends and family react to you joining the team?

My parents are pretty conservative. My mom is typical old school. At first, when she heard about playing football in underwear she was a little skeptical, so we just agreed to disagree. Then when we made the playoffs, I told her they were going to be live and asked if she would watch so I could feel like I have support. The whole family and my dad watched and said they were so proud of me. They could see that when I’m on the field, I’m at home. Now they’re completely supportive of it.

Were you out before you joined the league?

Being from a small town, I had to keep things under wraps. I moved to LA for a fresh start, so I never hid it from anybody — it’s been free information.

I didn’t feel the need to proclaim it, though. Eventually people figured it out. Some girls asked if I had a boyfriend and the answer was no, not so much. [laughs] I’ve gotten asked how do two girls have sex. My answer is how do they not? I’m like an educational tool for the team.

I hate the Packers but I love Aaron Roger’s championship belt celebration, even though it’s technically not allowed. Do you have a touchdown celebration dance planned for next season?

Yeah, I love those. The game against Chicago, I made an interception and ran it back for a touchdown but it was waved off because of a penalty called on my teammate. I slid into the end zone like I was sliding into home base and got tackled by all my teammates, so I didn’t have a chance to celebrate after that. When someone scores, you freak out and do whatever. After a touchdown, I jumped on #19, Zipphora Chase, and just went crazy on her. There’s no telling what you’ll do. When they play the starting introductions, I do the Dougie.

Seems like a lot of trash talk goes on between teams. Are you a big trash talker?

[laughs] You have a mouth guard in so you can’t talk shit without spitting on someone. But if they’re trying to hold me or punch me when I’m down, that’s too much. The league wants a good show, so sometimes they let stuff go. One time a girl came at me like a spider money and was being really crazy coming for my face. I went up to her and real quietly went, “I want to let you know you’re the worst player ever.” I didn’t know she had never played in an actual game before. [laughs] After the game she came up to me and went, “I am so, so sorry. It’s my first time.” It was so funny.

I’m amazed that clothes aren’t ripped off. Have you ever had a wardrobe malfunction?

I think everyone has had a malfunction. It’s illegal to intentionally lift uniforms off. A couple girls’ tops have actually broken. We always wear pasties — you have to have them, so we have fun with them. I had black stars with lots of sparkles on them. I also rocked skull and crossbones for a while.

As a lesbian, how do you feel about playing in a sport that caters to a male viewership?

I have a lot of guy friends and I get it. We establish respect for women’s sports because we play a predominantly male game and it’s not toned down. With the NFL possibly not having a season we might be right there to fill in. We’re hoping to establish an NFL for women. 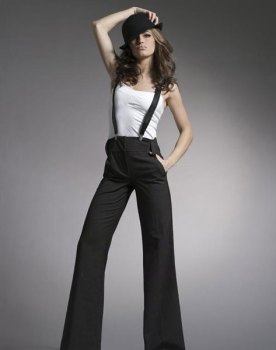 Is there a level of camaraderie between you and any other bisexual or lesbian women in the league?

Absolutely! I can always tell who the girls are on other teams. On my team there’s me and one other gay girl and a girl who’s bi. I’m so close with so many of the girls so yeah, we can talk about more things, but I’m so open with all of the team. It doesn’t matter if you’re gay, straight, or whatever.

Sex appeal is being used as the main draw to promote a legitimate athletic league. As a female athlete, does that bother you at all?

If I felt like a lack there was a lack of talent due to limiting people based on how they look, it would bother me. But I have yet to come across a team that doesn’t have incredible athletes. I’d have an issue if I felt I wasn’t being challenged. There are standout athletes and I’d rather play them than some Playboy bunny.

Do you ever see the league moving away from lingerie and towards more traditional uniforms?

I don’t. The uniform has changed and evolved. There are already leagues that have the same uniform as the NFL. Pads and the whole nine yards. They have to pay a lot to play and they make no money. I would rather get paid to play. You have to set yourself apart, so we have to keep some entertainment aspect to it, especially playing on TV. The best way for female sports to survive is by thinking outside the box to keep it interesting. But I do hope the tops are more supportive at some point.

You’ve been on the cover of Oxygen three times. Have any good hook-up stories with other models?

There’s another girl who’s been on the cover of Oxygen and there was a time in Vegas — we were both working an event. It was kind of a joke for us. Here we are, two fitness models and I think I met her through my agent. As soon as she walked through the room, she knew, I knew. We both thought we were bisexual at the time but after that stint in Vegas, I think we both were like “Bisexual? Not so much.”

I saw the playlist from one of those interviews. Is music a big part of your workout?

Absolutely! I like everything across the board. On a long run, anything from Florence and the Machine to Sia… easy listening, jazz, blues. If I’m in the gym, sometimes I’ll be feeling my roots and listen to some gospel. I download podcasts a lot. Lately they’ve been coming out with Etta James and classics like that and mix it and make house music. That’s what I love. 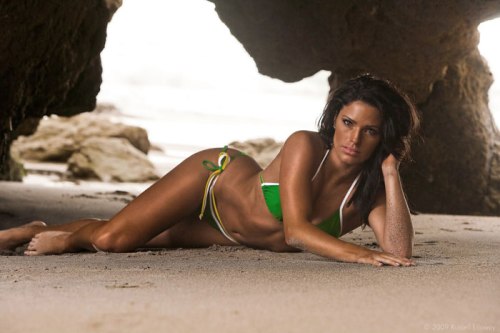 amber elizabeth out of her uniform, which is somewhat similar to her uniform

Are you looking forward to being around good music and dancing ladies at Dinah?

I’m going to get in a little warm-up while I’m home in New York. My friends all like to go out Thursday nights. I’m going to break it down a little bit to make sure I’m ready. I’m bringing my best friend with me to Dinah — we’re going to drive cross country. So she’ll be there and five of my teammates. I’m bringing the best dancers. Girls that can really pop their booties.

Have you been to Dinah before?

My first month in LA, I went to Lesbian Attack and I don’t even remember what I did that night. I was in awe of so many lesbians packed into one place at one time. From what I hear, Dinah is going to be ten times that. I’m excited and ready.

What’s your favorite song to dance to right now?

They have to play Teach Me How to Dougie. It’s my favorite song of all time ever. T.I. has a song called Make Your Face Fall Off, I think. I play it in my car all the time. If you stand still while it’s on, something is wrong with you.

Is there a go-to pick-up line you’ll be using at Dinah?

I’ve never hit on a girl my entire life! And I don’t plan on starting at Dinah Shore. The best relationships and friends I have happened kind of randomly. I’ll be walking around like a big dork but you never know what I’m going to come up with. I don’t have cheesy pick-up lines. I’m super sarcastic and that’s gotten me some great friends.

I’ve been dating the same girl for 7 months. She has a theory that if I eliminated all my options and it was just her, what does that prove? She’s not even coming. She said, “It’s something you need to experience and if you come back and still want to date me, that really means something.” She’s exactly right.

Any guilty pleasure foods you’ll be on the lookout for?

All the girls coming from LA, we have a drunk pizza tradition. No matter what time it is, three or four in the morning, we need pizza.