Edward Cullen first introduced me to Florence + The Machine; specifically the song “Heavy In Your Arms”, featured on the Twilight Eclipse soundtrack. I liked it and went on to explore the band’s limited but ever-expanding music catalogue. Now her song “Dog Days Are Over” is featured in Eat Pray Love, she’s toured the world with indie darlings the xx and won a BRIT Award and it’s safe to say her star is definitely on the rise. Also, her album is f*cking amazing.

Florence + The Machine is actually just one person and the super-awesome UK-bred Florence Welch likes it this way: “I like the idea of the name being something hard for people to decipher. Is it me versus the machine or me and the machine? You don’t quite know.” 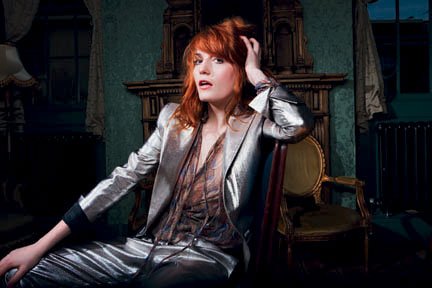 I talked to Welch while she was in New York City prepping for the MTV Music Video Awards — about death, David Bowie and how much she loves hip-hop, among other topics.

Corey: What is the story behind the name Florence and The Machine?

Florence: What I like about the name is that it was didn’t want it to just be name. I didn’t want it to be a band name. I wanted it to be something that was ambiguous. As if it were me versus the machine or just me against my enemies with many different interpretations. The name itself came from a private joke between me and my friend, Isabella. We used to go to her studio and make music together and she was always on her MPC while I was just singing. The name originated from that collaboration.

It used to be much longer but it was shortened to just Florence and The Machine. When I first started out I would make up band names all the time, I went through many like Team Perfect, The Fat Kid. And this was the one that just stuck. It is industrial. It’s not pretty or girly and I like it. It’s like a silver machine. David Bowie had one, that band, Tin Machine. Do you know about David Bowie and The Tin Machine?

Corey: No, I don’t. Was that one of his earlier bands?

Florence: It was a side project of his called Tin Machine. I was actually in this vintage store in New York City and found a t-shirt with David Bowie on it that said “I heart a tin machine”. I thought that was incredible. (laughs) 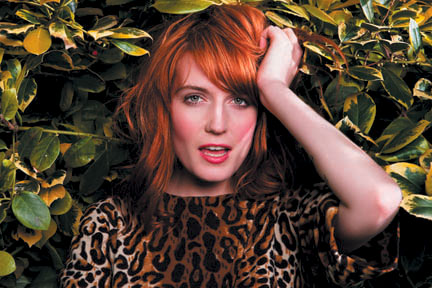 Corey: What made you want to drop out of art school and pursue a career in music?

Florence: I think it was always this idea in the back of my mind. I felt I never really had any faith to do it myself. I always thought I had to be in a band but I was always musical and singing at home alone. I always enjoyed art school but it was more of a place I went to while I decided what I wanted to do with my life. A sort of holding place, you could say. I am very ambitious. Ambitious but easily distracted.

Florence: Yes, absolutely. I easily get distracted by shiny stuff. I am this OCD girl who is very ambitious but always veering off course, sometimes for years.

Corey: Did you have an idea in mind when you wrote and recorded Lungs, or was it more of an organic process?

Florence: It really just developed. Most of the songs I had been performing for years and years, some of them more than others. There are a lot of songs that didn’t end up on the album as well. It was a very hard process, choosing what would go on the album. It was like putting together a scrapbook of phases from when I was 17 until I was 22. It was very demonstrative of a journey through those years. I put songs like, “Kiss With A Fist”, on the album because I wanted people to see where I started. Where my journey began. It ended up being a scrapbook of the years.

Corey: There are so many themes covered on the album, like love, death, sex – it’s like a retrospective piecing together of those years in your life. Was that a conscious choice?

Florence: I really think so because it’s kind of a patchwork quilt of an album. I love how it just deals with whatever the fuck comes out of my mouth when I play the keyboard. You have to let the other side of your brain take over, let your left side of the brain let go. You have to be loose with yourself. I couldn’t put it together. I think if you’re singing about things that are current, if you are singing about your mobile phone or car while you are driving then it is significant of your time. I didn’t want to make songs that could be created in time. Love, death, sex, and violence are never going to be irrelevant and all are themes within the album. Death is inevitable. Since forever. It will never go out of fashion. There will never be a new version of death. 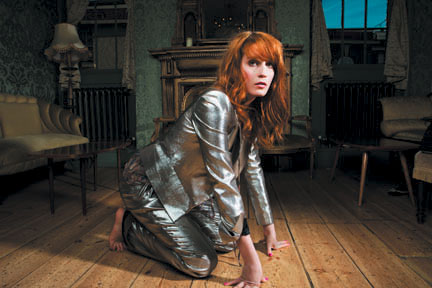 Corey: Yeah, I don’t think that is possible.

Corey: Who are some of the artists you’re listening to right now?

Florence: I am really huge fan of The xx. I have been on tour with them for ages. Best Coast is great. I know it’s ridiculous but I am obsessed with hip hop. I am really into Nicki Minaj. I am a huge fan of Drake. I love hip hop. Hip hop is basically what I love right now. Also a lot of random hip hop influences in terms of samples and drums. Drums were the first instrument I played in a band “Drumming Song,” was indirectly inspired by Rick Ross.

Corey: You spent time as an indie artist before signing to Island Records. What has been the biggest change in your career since signing to a major label?

Florence: I think maybe I was quite naive about the about the amount of touring and gigging. When I looked at it on paper I was like, are you fucking serious? I don’t think you really realize how much you can do until you do it. There is no tour manager for your real life. So it can be quite odd. I used to be really exited about the idea of a tour bus but they are horrible. You can’t share a bus with sweaty boys. There is a lot of involved. You do a lot more press and work with publicists who are getting you out there. Hopefully people are interested in you. With a major label you have to be willing to put in the work. You sing, but then you also have to be really committed to doing work beyond that. 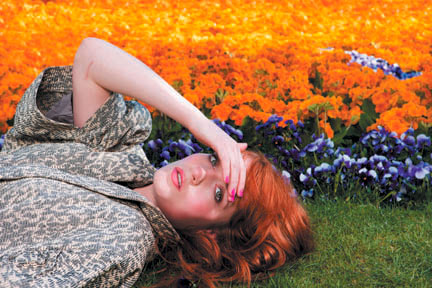 Corey: Every artist has that elusive person who has had a great impact on their career. Who would that person be for you?

Florence: Tom Waits had a huge impression on me. I would also say the first Arcade Fire album, Funeral. When I had that album it blew me away, I had never before listened to an album that made me just sit down and cry.

Check out/listen to Florence + The Machine
on iTunes and Amazon