Usually we, the queers of the internet, feel like the world we live in is, on any given day, somewhere on the spectrum between “indifferent” and “openly hostile” to people like us. We’re not saying we like it, we’re saying it’s the status quo. But lately, as people whose job it is to check Google News obsessively for things tagged “gay” and “lesbian,” we’re noticing a weird trend where people seem to be really into/protective of us? Like, the people calling out other people for inappropriate and homophobic behavior aren’t just gay activist organizations who are funded largely by their director’s mother and a series of vegan bake sales, but other, straighter people as well. What is this fresh hell new thing? Here, we’ll share some examples with you.

We’re all very upset with Target for donating $150,000 to anti-gay Republicans, but much like those Republicans themselves, I think we had all assumed that there was not a whole lot we could ultimately do about this; it seemed like a lukewarm apology from a Target exec was the best we were going to get. But Queerty found this graph about the amount of “buzz” (which is apparently a real thing that can be quantified) around Target, and guess what? There’s a pretty major dip around early August, when Targetgate 2010 began. I’ll be honest with you, I just don’t think there are that many queer Target shoppers in America; my completely unscientific analysis says that there are quite a few straight people who have also moved on to more politically progressive pastures. Way to go, straight people who want to buy floor lamps for $10 but drive right on by the Target anyways on principle! (@queerty) 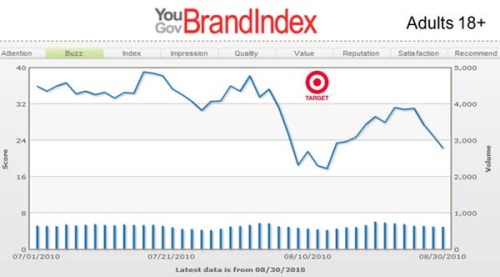 Is an Australian swimmer who used the word “faggot” in one ill-fated tweet, and despite apparently being the Aussie Michael Jordan of product endorsements before this incident, has since lost a sponsorship deal with Jaguar and possibly also Davenport, SunRice and Channel 7. She has since issued an apology for the event which, in contrast to other celebrity apologies for the same thing, which often seem as though they’re annoyed they couldn’t make an intern do this for them, is actually more like Halle Berry’s Oscar speech: an enormous cryfest. It’s like this is a really big deal to people? Don’t get me wrong, this is a good thing, but is anyone else just amazed that the rest of the world suddenly cares? (@queerty)

I mean, you guys have to see where I’m coming from with this one, right? If there is one place at least in America where no one cares about gay jokes, it’s the NFL. But when Dan Hampton made an unfunny Brokeback Mountain joke on his show Pro Football Weekly, everyone got legit up in arms and now it looks like he’ll maybe apologize. Granted, this joke came along with an arguably even more tasteless one about Hurricane Katrina, but still! What is this world coming to? (@glaad)