Hello! Welcome! Look at all of you, heart pieces of my digital heart! Laneia is off on what I think we will all agree is a very well earned vacation, which means two things: 1. I’M BAAAAAACK!! and 2. We are going to talk about having popsicles for breakfast.

Popsicles for breakfast, you say! Le Gasp! It can’t be. But we are tail-ending a ten-day long heat wave where I am, and I suspect where many of you are, too. On Sunday I finished the last corner of a pint of ice cream for breakfast. And while I cannot in good conscience recommend that we all eat ice cream first thing every day (though how glorious would that be?), that same night I went out and finally bought some popsicle molds. You see, if you mix your greek yogurt with a little bit of almond milk, and puree some fresh berries, you can swirl them together with a bit of honey and it’s essentially a wholesome yogurt parfait – but it’s frozen and therefore so perfect and satisfying on a hot summer morning. 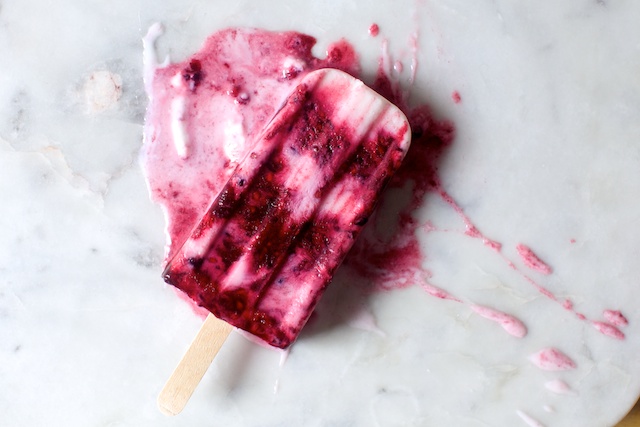 Photo from “Swirled Berry Yogurt Popsicles” by Deb Pearlman, over at Smitten Kitchen

I wanted you to know about this witchcraft breakfast ice cream substitute so that we can live our best summer lives. And now, here’s what else has been going on this week.

 The 10 Most Bisexual Things You Can Watch on Netflix Right Now. Did I mention it’s hot out? Crank the air conditioning or pull out your fan and spend some time with Tessa Thompson’s Valkyrie. I mean Tessa just came out last week, and what’s sweeter than watching a bisexual woman of color play one in a movie? Nothing, I say!

Speaking of your summer streaming needs, Heather assembled this awesome list for you in our dark times: 20 Happy Lesbian and Bisexual Romantic TV Storylines That’ll Warm Your Heart Right Up.

This makes me want to scream: We Were Rejected From Adopting Foster Children Because We Are Gay.

New Jersey Gov. Phil Murphy signed into law a measure to make it easier for transgender residents to change their birth certificates .

I didn’t know anything about this project before just now, but I am SO EXCITED! Nicole Amber Maine to star in the indie film, Bit, about a teenage transgender girl who moves to LA and gets involved with a group of intersectional feminist vampires.

How Leslie Feinberg Became the Parent I Needed During My Transition.

“Your own culture is worth a memory.” — Queering the Archive With Kate Messer.

(Ugh, this is so good y’all. Perfect for sleepy, feel good, summer evenings.) Everyone Makes Out in the New Video for Meshell Ndegeocello’s ‘Sensitivity’.

Evan Rachel Wood Has Been Trying to Pitch a Directing Project for Two Years, Reveals the Sexism She Faces in Meetings.

LongReads has been doing a deep dive into the Autostraddle archives lately. They recommended us to their readers twice in just the last week! First, our 2013 Recamp series (a play-by-play recap of A-Camp) was name checked in their Summer Camp Themed Reading List. Then, our very own Rachel’s Top 10 Ways to Survive the Summer Without Air Conditioning got a shout out in their “Summertime and the Reading Is Easy” List.

She had this to say about the breaking news:

regretfully I must admit that I have since forgotten where I came from in that I got an AC unit, but this advice stands and spiritually i'm still holding a cold la croix can against my neck https://t.co/mCJ29pmgM6

We just passed the official halfway mark of the year. Take a deep breath, have some water, journal about your goals. Then read this from the folks at Shondaland so that we don’t all fall into a spiral of despair. THERE IS GOOD IN THIS WORLD. I promise you. 50 Good Things That Have Happened in 2018 (So Far) .

Wanna see a kickass eight year old girl from Japan rock the hell out of the drums to Led Zeppelin? I know you do.

I will recommend the following with a confession: I was an over the top, way too dramatic, sing it to the rafters, Broadway kid in high school. If you were too, you will probably love this: 7 Days With the Most Talented Theater Teens in the Country. And even if you weren’t a theatre kid, this 20 minute mini-doc about the survivors of the Parkland shooting putting on their spring musical will likely move you to tears.

Heather Hogan loved this and she thinks it will touch your heart spaces: Great British Bake Off winner Nadiya Hussain reveals reality of living with debilitating panic attacks.

Yesterday was the Fourth of July and I have a lot of complicated feelings about that holiday. That’s true for me every year, but this year it’s especially difficult to celebrate “American Freedom”, you know? If you found yourself feeling the same way, check out the some of the following:

“After the end of the Civil War in 1865, the nation’s four million newly emancipated citizens transformed Independence Day into a celebration of black freedom.” — When the Fourth of July Was a Black Holiday.

“What to the Slave Is the Fourth of July?” by Fredrick Douglass. I’ve been reading this every July 4th since I was 12. Forever recommend.

A collection of How 15 Artists Have Reinterpreted the American Flag Throughout History (including Barbara Kruger and Jean-Michel Basquiat!). One of my favorites and an iconic black woman artist, Faith Ringgold, also often finds the American flag to be a potent and powerful symbol in her work.

Let Us Remember Why Protest is Patriotic.

And while we’re on that note, Meet Therese Patricia Okoumou, the heroic Black woman who climbed Statue of Liberty to protest Trump’s immigration policy.

From my friend, Kirya Traber. I couldn’t have said it better.

Go out there and make some noise this weekend! Xoxo.