One of my favorite things to do is see movies by myself because it means I get to sit alone in a cool dark room and be told a story while I eat nachos and don’t have to talk to anyone. However, I have never wished to be surrounded by my queer friends more than I did when I was alone in a theater watching Incredibles 2 because it is not a gay movie but also it is the gayest movie of the summer — sorry, Oceans 8 — and all I wanted to do was quirk my eyebrow at another lesbian and have them quirk their eyebrow back at me to corroborate this truth. Luckily Tumblr exists so I was able to quickly and eternally confirm my suspicions as soon as the movie was over. In fact, my search for “elastigirl x evelyn” was too cautious; they already have a ship name and it’s “hevelyn” — but I’m getting ahead of myself.

It’s been 14 years since Incredibles lit up the screen and blew up the box office, but Incredibles 2 starts the very minute after the first film ends. Despite saving the world, repeatedly, in the original movie, it’s still illegal to be a super, which means the Parr family — Helen and Bob and Violet and Dash and Jack-Jack — are in trouble. Their government contact puts them up in a motel for two weeks, but after that either Helen or Bob are going to have to get a regular human job to support their family, or they’re going to be homeless. 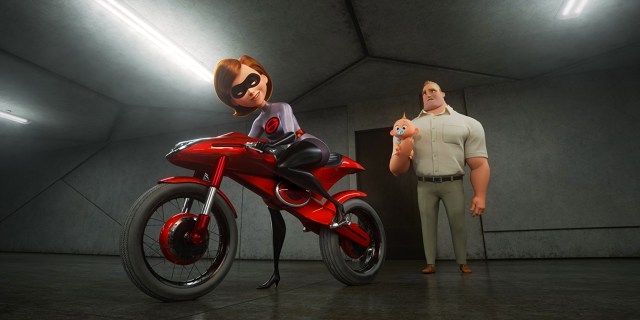 Dash and Violet are less thrilled about this new reality than even their parents. They’re good guys! And they want to fight bad guys! And anyway, how can being born a certain way be illegal? (Superhero movies are always shades of civil rights struggles, but Incredibles 2 leans into it.) The Parr’s salvation seems to come in the form of billionaire entrepreneur Winston Deavor and his genius designer sister Evelyn, who want to help supers rebrand, starting with Elastigirl. Helen’s reluctant, mostly because Bob’s got Don Draper-itis and can hardly stomach the thought of staying home with the kids while his wife is out saving the world, but she can’t say no when they offer to furnish the family with a house, and Elastigirl with a new bike and new supersuit and all the PR she can handle. They even introduce her to a whole gaggle of B-list supers who are her super fans. 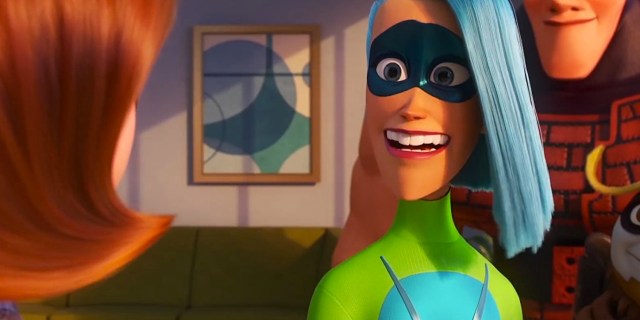 And here is our first gay thing. You ever wonder what it would like look if Kristin Stewart played a sketch comedy version of herself stanning over her biggest queer hero? Well, meet Voyd. She’s got Dr. Strange-like powers and when she meets Helen at a mixer she is every queer fangirl. First she flips out, then she pep talks herself to “get it together, Karen!,” then: “Hi, my superhero name is Voyd. I just want to thank you for, like, being you. And… I… just… ugh! Okay! I felt like an outcast before, but now with you being you, I feel like… ‘Yay me!'” Then she wraps up Elastigirl in the biggest, most awkward hug. Voyd looks a lot like Kristen Stewart and she moves a lot like Kristen Stewart and I’m definitely not the only person who thinks so. When you add that to her coming out speech, it’s shorthand for queer — and in the wise words of Carol Aird, that’s that.

But that’s not all! Incredibles 2 saves its queerest undertones for the relationship between Helen, the longsuffering superhero housewife who’s gotta do emotional labor on her selfish husband and her awesome kids and literally everyone she saves; and Evelyn, the short-haired, husky-voiced career woman making it as a single lady in a high-tech version of the 1960s. Their chemistry is immediate and they both know it, winking and smirking at each other across the room every time a man tries to explain something to them (which, as you know, is the second gayest thing two women can do). Oh, and here’s Evelyn gazing adoringly at Helen chatting with Voyd, while the camera zooms in on her and emphasizes her heavy-lidded eyes like it’s some kind of fan fiction writer. And here’s Helen and Evelyn enjoying late night drinks alone, creating inside jokes, dragging men, connecting in a way Helen’s never connected with anyone else, and patting each other on the knee. And here’s Evelyn fist bumping Helen and then gently holding onto her wrist. And here’s Evelyn pulling Helen’s face to her by the chin, and beckoning her forward with a simple motion of her finger.

Also Evelyn was originally conceived as a dude???

It’s hard to believe all of it is not on purpose. It’s animated! A team of people made Helen and Evelyn look like they do when they look at each other!

I can’t tell you any more about any of that without spoiling the movie, but if you’ve ever seen a movie, you’ll see this ending coming a mile away and it doesn’t make anything any less gay. 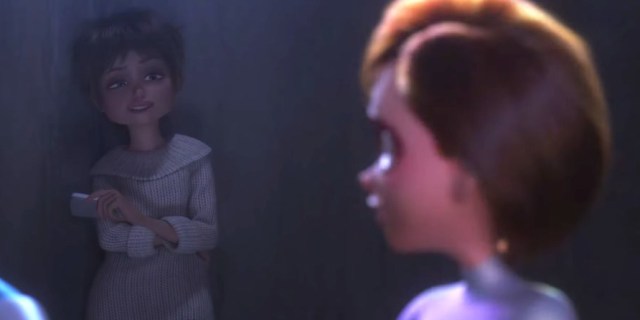 My case is airtight, but the best evidence I can give you for the fact that Helen and Evelyn are three seconds from kissing on the mouth in every scene of Incredibles 2 is that the ol’ boys club on Reddit hates this movie, which they call “a steaming pile” with a “ridiculous political / feminist agenda” that makes Bob a “hopeless buffoon” while the women speak with “heavy undertones of gender dominance.” Also they deemed it “very Finding Dory,” if you know what they mean and I think you do.

Incredibles 2 is the second best superhero movie of the year, after Black Panther, and one of the best action movies to hit theaters in a while. Don’t go just for the gay subtext, but if you do go I guarantee you’ll see it.