GLAMBERT: Adam Lambert’s Big Week continues! After his American Music Awards performance (which scandalized the virginal eyeballs of 14 million people who are much more used to being vocally slaughtered with hateful words than visually assaulted by the dangers of male-on-male sexuality), 1,500 entire people complained to ABC and Adam lost his spot on Good Morning America the next morning. (1,500: 14 million is approximately equal to the ratio of Ilene Chaiken defenders to supporters on an L Word recap, and you don’t see us censoring the Death of Dana).

This morning Adam redeemed himself this morning by Jesus at The Early Show, where not only did he provide an incredible vocal performance sans-beejers (and sans incredibly high-energy coreography for a dude who’s never claimed to be a dancer) but he brought his Mom! See, he has a Mom you guys and Elvis hair! Hawt! You know who else had a Mom? Jesus. He didn’t have a Dad though, ’cause lesbian moms make better parents. JUST KIDDING!

Also if you wanna see a preview of our own Robin Roemer’s photo session with Adam Lambert, those are right here for ya.

Here he explains that he’s a performer, not a babysitter, so you’ll need to find a new one for Friday night, I’d like to suggest Intern Nicole:

Just uh .. one little thing? CBS blurred out Adam’s gay kiss during their replay on The Early Show but displayed a still photo of Madonna and Britney’s smooch. Listen up guys, stop saying lesbian kisses are okay for TV but gay kisses aren’t, that’s not true and it’s misleading. ACCORDING TO AMERICA, LESBIAN KISSES AREN’T OKAY FOR TV EITHER. What’s okay are straight (or closeted) girls kissing each other. 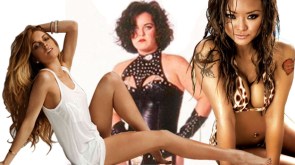 SINGLE LADIES: “We feel for you, ROD—being one of Hollywood’s only openly gay celebrities can’t be easy. Ellen pulls all the fly hoes!” Complex Magazine, which has never been female-friendly, let alone gay-female-friendly, has picked 10 potential partners for Rosie O’Donnell to go out with next. Unfortunately, it’s still Complex Magazine, which means it’s really not very complex. In addition to making fun of Rosie’s weight and bashing some of the ladies for promiscuity (when that’s what their magaizne endorses for its male readers), they suggest four women who are defo not single — Kim Stolz, Leisha Hailey and Kristanna Loken, Amber Rose — and accuses Leisha Hailey of “not being able to shut up about that frickin’ yogurt” even though she hasn’t spoken a word on it since I think the 90’s? To their credit, they note that Loken & Rose are otherwise involved.

ANYONE BUT ME: Anyone But Me’s hot new celebrity video features Eric Stolz, offering 5 reasons to tune in this season. Need more convincing? Check out Autostraddle’s interview & photoshoot with Rachael Hip Flores and out actress Nicole Pacent and interview with writer Susan Miller.

NIP SLIP: Mediaite’s got a lengthy discussion of Gaga’s nipples during her performance on Leno. And you thought we were obsessed. (@mediaite)

Marion County’s only gay bookstore will close: Out Word Bound, Indianapolis’ only gay and lesbian bookstore, will close its doors after Dec. 25.

JUST DANCE: Katic Couric is a Badass – I think this is what they’re talking about when they tell you not to post facebook pictures that you don’t want your future employers to see. (@gawker)

A BISEXUAL: “Fergie Frangelico” sounds almost as good as “Tila Tequila” When asked about exploring her ‘lesbian side’, Fergie told OK! magazine: “I’ll put it this way, I’ve experimented definitely but I have never had a steady girlfriend.” (@mirror)