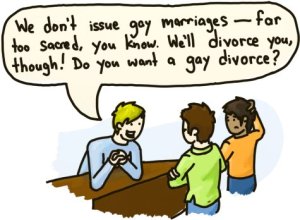 MARRIAGE: New Jersey voters oppose gay marriage legislation by a slim margin, according to a poll released this morning by Quinnipiac. The New York Times reports that efforts to legalize gay marriages in New Jersey may be faltering and Queerty says they should give up ’cause everyone else lost already.

Clearly they gotta appease the masses, but really GLAAD, really? Couldn’t you say “informed us” instead of “confirmed”? This whole thing is just a big fat example of how everyone is so accustomed to hot women being sexualized with other women or themselves (keep in mind; this is not about out lesbians or butch women — that remains the final frontier of what America is willing to see on stage) and men sexualizing women that they honestly don’t even realize that the act they saw performed was scandalous precisely because we cannot handle seeing gay men sexualized in that way? It’s not homophobic, it’s just a result of the world we live in. If the audience can’t recognize their own unconscious bias — has effects in everyday life — we’ll never get anywhere.

NOT ABOUT MARRIAGE: Queerty presents the most touching video about love they’ve ever seen.

GAY PARENTS: Even if there’s been confusion lately about the goodness of gay parents, there’s one kind of parents I know I wouldn’t want — an ex-gay parent! Lesbian partner wins custody case against ‘ex-gay’ partner: A Rutland Family Court judge ordered a first-of-its kind parent custody change Friday in a child-visitation dispute involving a Virginia woman and her former lesbian partner who lives in Fair Haven. In a 21-page order, Judge William Cohen granted sole custody of 7-year-old Isabella Miller to her nonbiological but court-recognized parent, Janet Jenkins.

CIVIL PARTNERSHIPS: Guys, straight people just wanna commitment ceremony each other too Let’s all watch Julie Goldman and Kate McKinnon and remind ourselves that, even though marriage is still unequal, there are a lot of funny gays. (@guardian)

FILM FESTIVAL: The Academy Foundation has given $30,000 to the 2010 Outfest. (@variety) and The Southern Voice gets a $12k matching grant for new gay publication (@ajc)

MARIJUANA: The AMA’s reversal on marijuana: For all the debate over whether marijuana has medicinal value, arguments that the drug has significant palliative properties or that it has none suffer from the same flaw: There’s little scientific proof either way.

LAWSUIT: Lambda Legal is filing a lawsuit against the Atlanta police department for the raid on the Atlanta Eagle back in September. (@cnn)