From October 9-12, the Javits Center in Manhattan was overrun with elves, Star Lords, Harley Quinns, and various incarnations of Dr. Who. This year’s New York Comic Con was the biggest ever, with the number of attendees beating out even the long running San Diego Comic Con.

I can’t speak to how the programming compares, as this was my first large scale Comic Con. But I had a great time! I’ve already written about one the excellent anti-bullying/pro-hero panel that was held on Friday, but there were so many fabulous things going on that I couldn’t pick just one to talk about.

For context, keep in mind that the comics industry is still very male-dominated. As DC Women Kicking Ass pointed out, there were 327 comic guests at NYCC, and only 32 of them identify as female. That’s a mere 10.21%. Still, the convention is big enough at this point that there are more than enough things to keep a queer geek girl wildly overbooked with interesting activities from Thursday through Sunday.

Here are all the things you should know about from NYCC 2014. 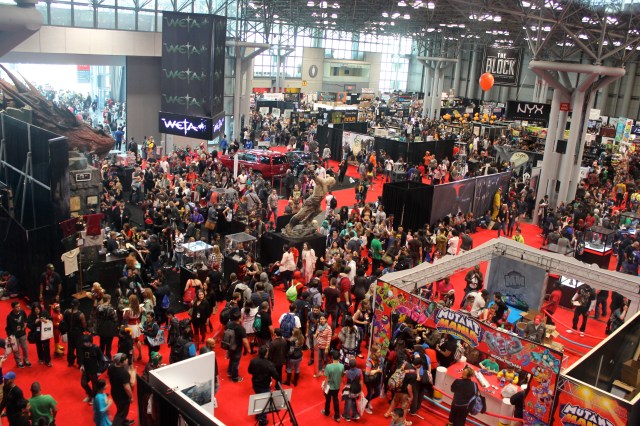 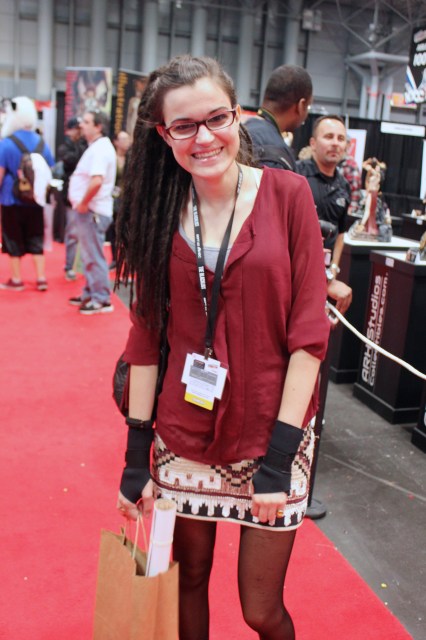 A cosplayer dressed as Cosima, from Orphan Black.

Cosplay Is Not Consent

NYCC premiered a brand new anti-harassment policy this year, giving attendees protection against all forms of harassment, including offensive verbal comments, non-consensual photography, and bathroom policing. The zero tolerance policy was drafted by The Mary Sue, She Geeks, and Women Write About Comics (among others), and came about as a result of feminist geek community outcry.

To promote the policy, large signs titled “cosplay is not consent” were placed prominently at each entrance. Slides with the full text were also displayed on projection screens in between panels. 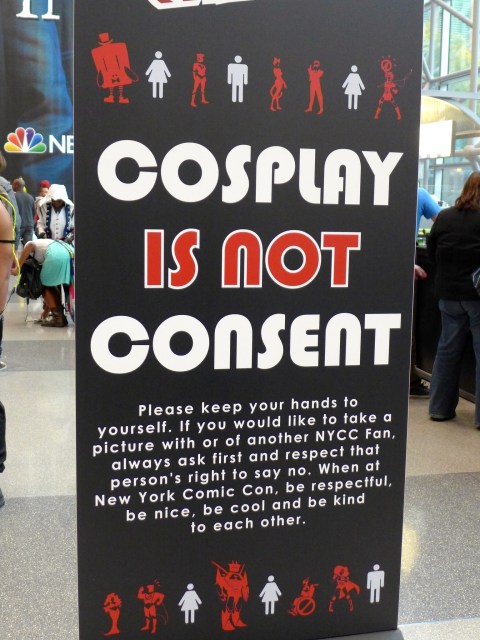 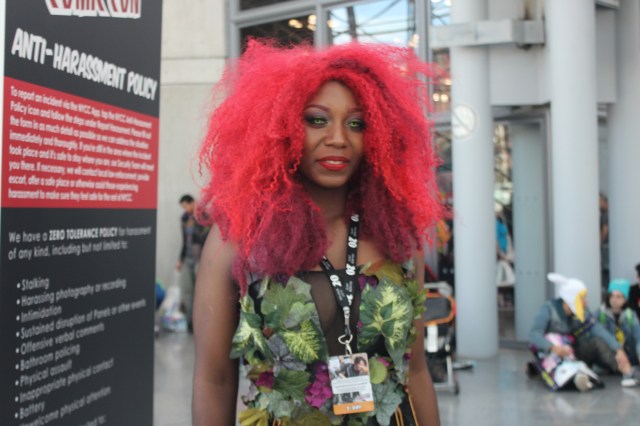 A cosplayer dressed as Poison Ivy, from the Batman series. 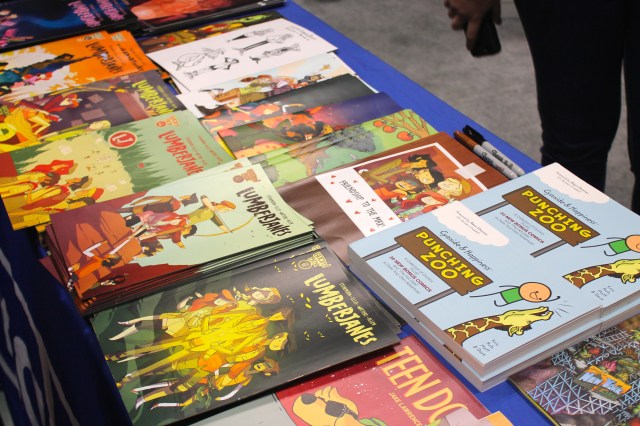 Women of Marvel and Women of DC

Am I committing sacrilege by talking about the DC and Marvel panels together? Probably, but I’m going to do it anyway.

Marvel made several big announcements at their panel:

At an earlier, “closed door” panel for professionals, Marvel also teased that the recently introduced Spider-Woman known as “Spider-Gwen” would be getting her own ongoing series in February. 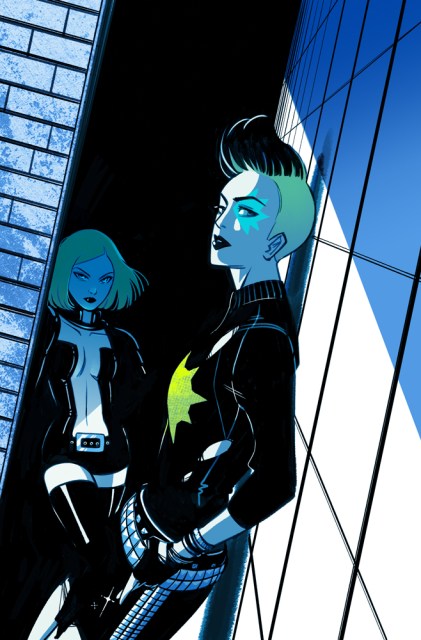 Their Women of Marvel panel was jam-packed full of panelists — who, as one audience member pointed out, were suspiciously absent from panels that were not specifically about diversity. Better luck next year?

DC’s panel had a more reasonable number of panelists and was actually able to have a really interesting discussion. Moderator Amanda Salmons, owner of Muse Comics + Games and a founder and former executive director of the retailer association ComicsPRO, introduced the panel by explaining that “Women In Comics” panels are typically disappointing to her, with their tendency to tokenize women and focus almost exclusively on discrimination and its effects. She decided to take it in a different direction this time because, “This is our industry. This is our house. We’ve been here for decades, and there were others before us. These writers, artists and editors here on the panel are the comic book industry. This is their world. Our world.”

A high point of the discussion for me was when panelist Marguerite Bennett (writer of Butterfly and Sleepy Hollow) shared how she first fell in love with comics when she discovered supervillainesses Catwoman, Poison Ivy and Harley Quinn. “I had wonderful and judicious parents. They raised me to believe that there is no such thing as toys for girls and toys for boys. You know, I had free range. I had — and still have — action figures. It’s really terrific. I remember going into a comic book store and wanting to follow up on Catwoman. There were no other women there. And I remember realizing, my parents told me I’m allowed to be here; these are toys for girls too. That was the moment where I realized there was nothing wrong with me.”

To see the image slides projected during DC’s panel, check out The Outhousers. A writeup of the discussion is posted on Comic Book Resources. 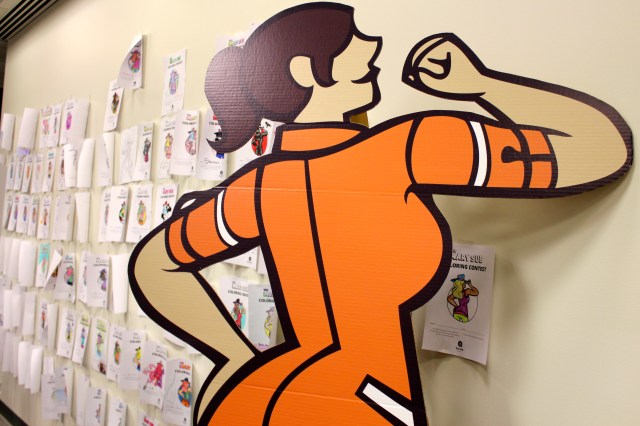 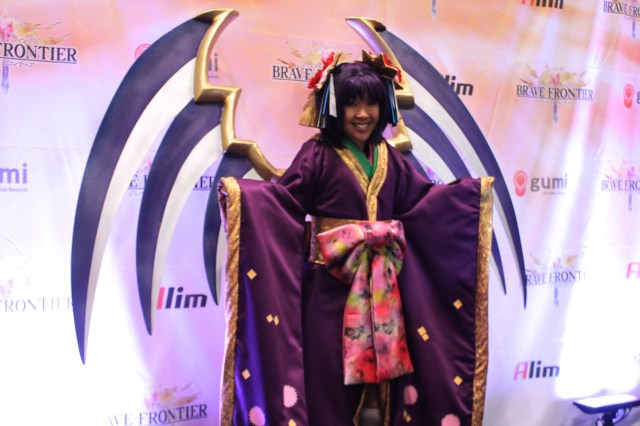 A cosplayer dressed as Kikuri, from Brave Frontier.

There’s a writeup of the panel on Bleeding Cool, and a copy of the presentation slides available on PrismComics.org. A teaser: 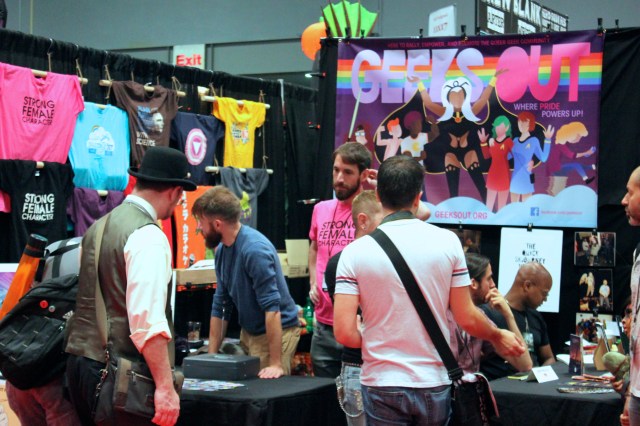 The Geeks OUT booth, “where pride powers up!” 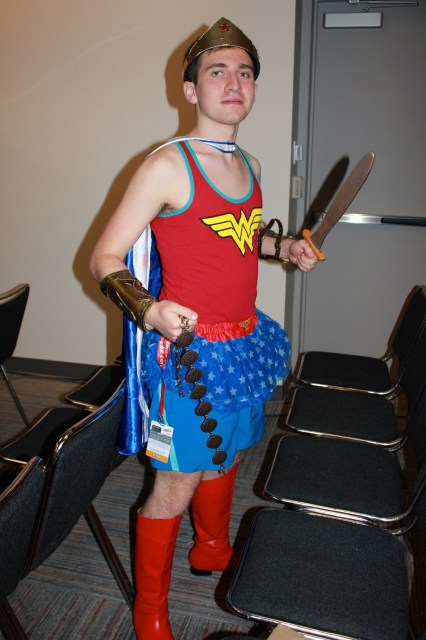 This Sunday panel discussed common tropes in historical depictions of trans characters, and was my favorite thing at the entire convention.

Said Moderator Charles Battersby, “In the first, I guess, fifty years of comics, you would really only see transgendered characters used as a plot device — that someone’s going undercover, or they’ve been forcibly changed in their gender. You can see a bunch of the zany things that comic writers have put characters through, from shapechangers becoming women to Captain America disguising himself as an old lady. One of the long running gags that’s used to make a character change gender is that they’ve got to go undercover. There have been a lot of stupid stories that are usually played for humor, where people are laughing at the character. There’s a recurring theme that when a man is dressed as a woman, he’s degrading himself because women are inferior.”

P. Kristen Enos observed, “One of the key things is that when it’s a male character dressing as a female character, not only is it a disguise but also the idea that he’s less threatening and he’s easy to take on as a target — which is usually the point of why he’s dressing like that, to flush out the bad guys.”

Morgan Boecher added that the trope highlights gender identity and gender roles as two distinct things, allowing readers to see it all the more clearly when they’re switched. Often, storylines of this trope promote “the idea that femininity is lesser, and look how strange that this person is that they’re trying to put on these feminine qualities. Their facial structure doesn’t match our idea of what a feminine person is supposed to be. Their height, their body shape. Like these people aren’t real women. It’s a very poignant idea, especially when these are bodies that real women have. Transgender women oftentimes don’t fit into the mainstream idea of what female bodies are supposed to be. And yet, their gender identity should be enough to validate that.” 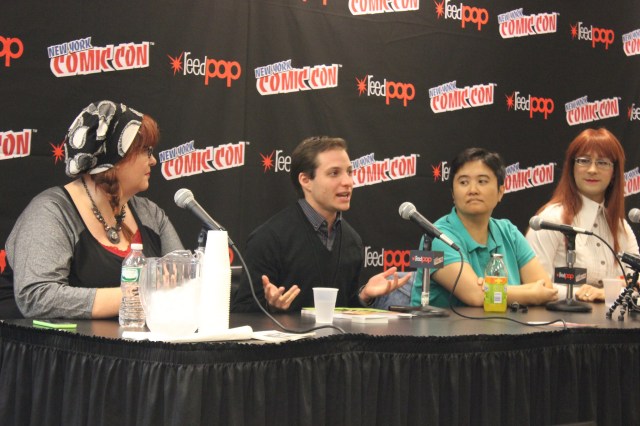 Looking at the wider implications of the “cunning disguise” trope, Boecher noted that even the idea of “disguise” is telling. The narrative typically goes, “if you’re not revealing who you truly are, what’s underneath your clothes, what’s underneath your expression, then you’re not an honest person. But why should any trans person be expected to divulge everything about what’s under their clothes when cisgender people don’t have to do that on a regular basis too?”

The panel also explored the “curse” trope, wherein characters are forced to change gender, frequently as a form of punishment. Said Boecher, “I think forcing someone into another gender is a really good punishment, because who wants to be in a gender that they don’t identify as? That’s sort of the transgender struggle. Society is categorizing people and labeling them in a certain way that doesn’t match how they feel.” However, panelists noted, most comics write these stories in a way that paints gender change as deplorable.

Battersby also observed, “Many of these curses are intended to punish someone that’s sexist, by showing them what it’s like to live the other gender’s cultural roles. But often they’ll do a good job of exposing sexism, but not actually addressing what it’s like to be a transgender person.” Even a single line acknowledging transgender experiences could go a long way to fixing this. (For example: “do you know how many people would love to have that curse?”) 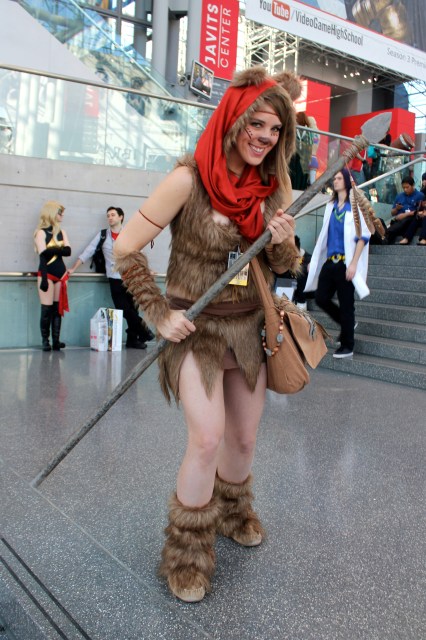 A cosplayer dressed as an ewok, from Star Wars. 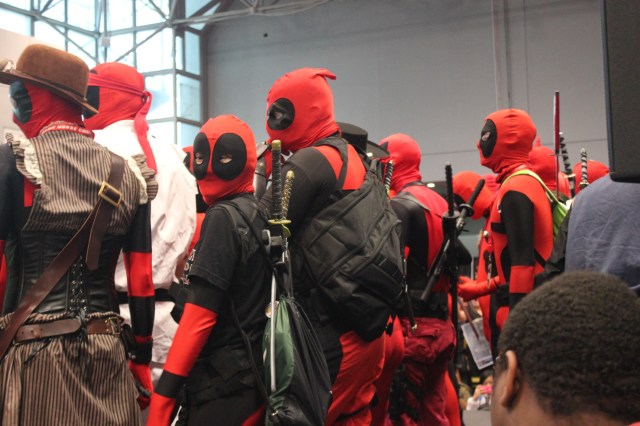 A roving flash mob of cosplayers dressed as Deadpool.

BTVS comic book editor in chief Scott Allie, who has just had a baby, is retiring from the Buffyverse comics after 16 years. He did a video interview about it with Buffyfest.

Amber Benson — who played the queer character Tara in Buffy — played a multi round game of Fuck/Marry/Kill with Buzzfeed. 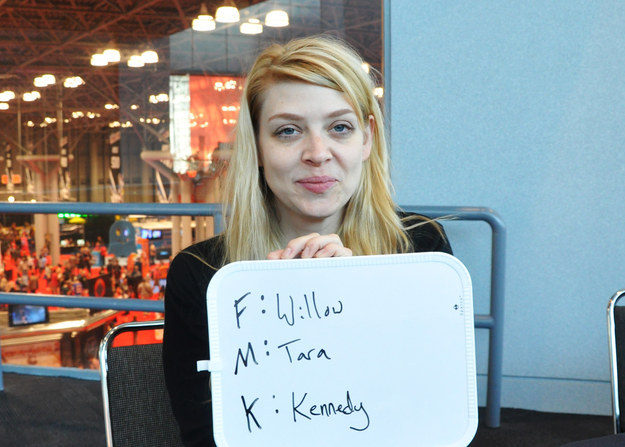 She also did a pretty great interview with Nerd Reactor about her new book series, the first of which (The Witches of Echo Park) launches in January.

Finally, there was a Buffy panel! Much love for those Strong Female Characters. 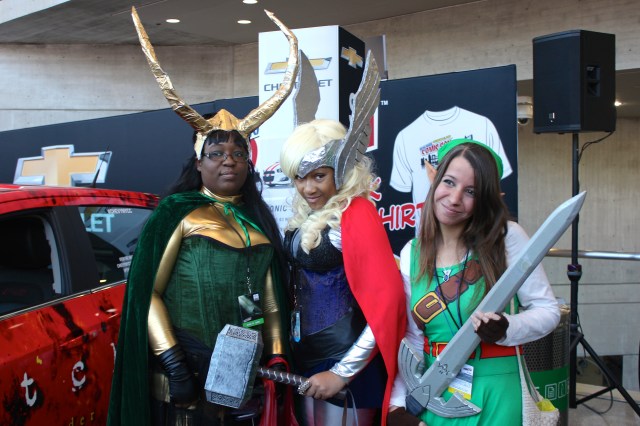 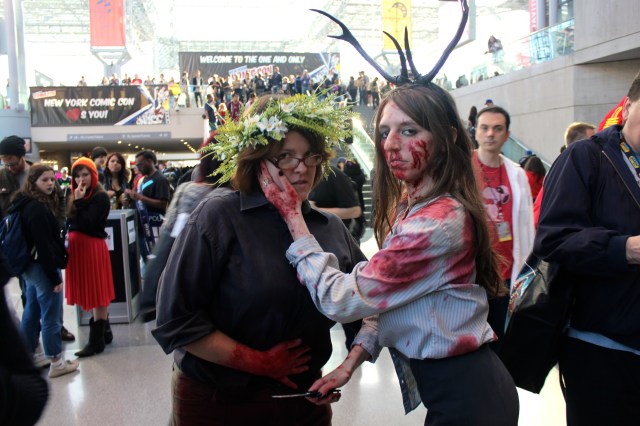 Cosplayers dressed as Will Graham and Hannibal Lector. (Thanks Samantha for helping to identify them!)

In a panel on Thursday, Phil Jimenez of Wonder Woman, Kieron Gillen and Jamie McKelvie of Young Avengers, Luciano Vecchio of Ultimate Spider-Man, Annie Mok of Screentests, and Noelle Stevenson of Lumberjanes discussed their experiences in the comics industry and incorporating queer themes into their work. Jude Biersdorfer, Staff Editor of the NYTimes Book Review, moderated. This is the second time the panel has been hosted at NYCC.

During the talk, Jimenez made some interesting remarks about Wonder Woman being “ultimate queer character in comic books.” Except that by “queer” he didn’t mean “sexually or romantically interested in other women;” rather, “defiantly anti-normal female in a world filled primarily with males.” So, that was a thing. He also didn’t think that anyone would want to make a Wonder Woman movie in her current form, as the male writers have turned the character into a sort of generic “warrior maiden” archetype that is already well-covered by other characters.

The outspoken Jimenez also suggested that there may be too much focus on same-sex marriage in comics. “It’s good, it’s acceptable, it’s heteronormative, you know, ‘We’re just like you!’ But for me, pushing the envelope would be to defy this more, and to continue to put out characters that are not just like them and are still pretty awesome anyway.” 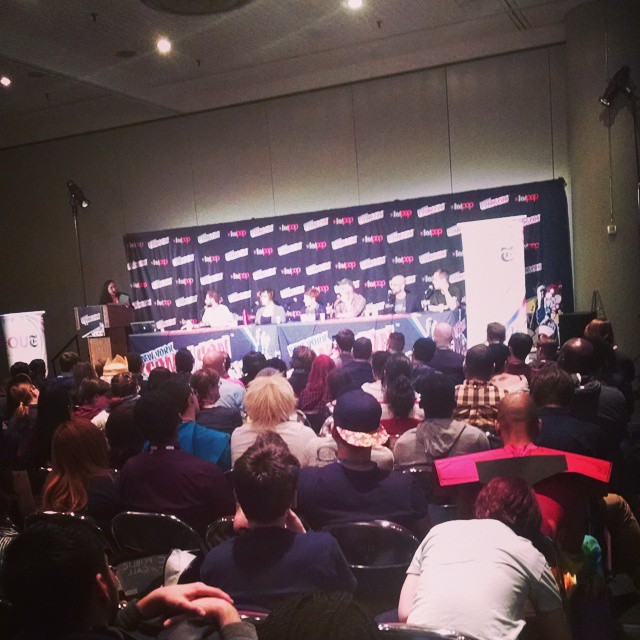 Noelle Stevenson speaks at the panel. Via Comics People Tumblr.

Asked about Lumberjane’s success, Stevenson shared, “I think we kind of thought that we could do whatever we wanted because no one was really going to care. Which amazingly was proved wrong, really quickly, that a lot of people were watching and were reading. And that was amazing.

But we kept doing whatever we wanted to do. And that was really exciting. It was great to have three whole issues without any male characters at all in them, and for every girl character at camp to be so different from each other, and to show all the different ways that it’s possible to be female.”

A (quiet and kind of mumbly) recording of the panel is available at Gay Nerds. 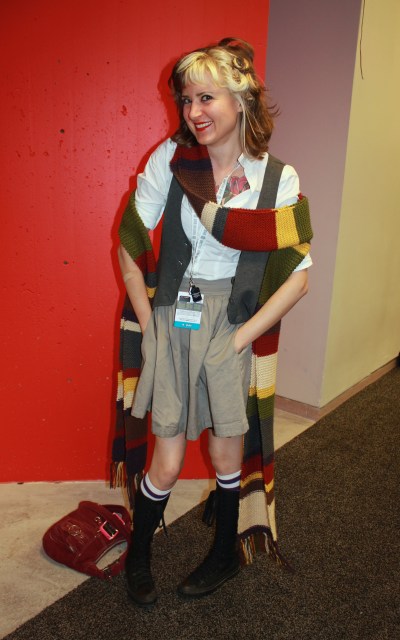 A cosplayer dressed as Dr. Who. 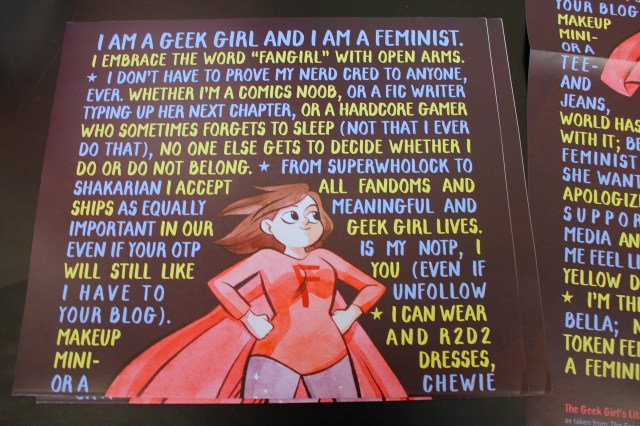 Free posters being given out at The Mary Sue’s Geek Girl Headquarters.