Once upon a time (May 21-26th, to be specific) in a land far far atop a mountain two hours outside of sunny Los Angeles, approximately 300 queer humans gathered for four days and four nights of revelry, renaissance, intellectual stimulation, dance parties and deep sea bonding. They called it A-Camp 5.0, and it was beautiful! This is the third of three fantastic recaps which serve to ease our collective separation anxiety, give you a behind-the-scenes look at how your A-Camp soysage is made, enable us to wax nostalgic over times gone by and provide prospective campers with a brilliant glimpse into the A-Camp Experience. 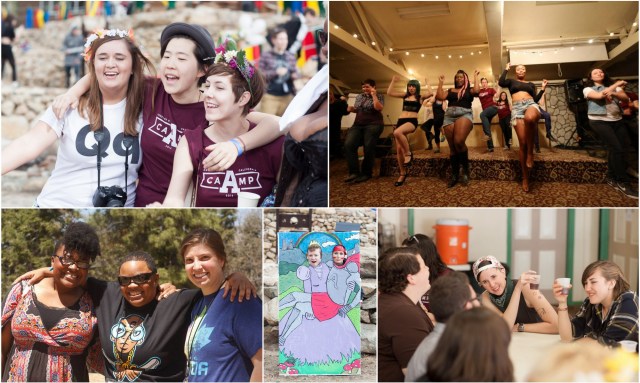 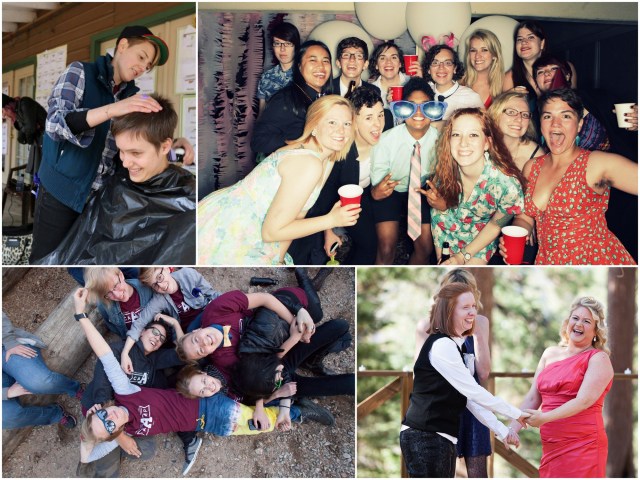 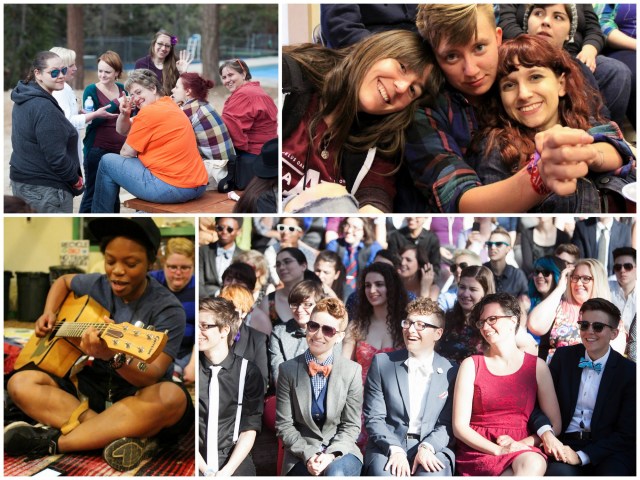 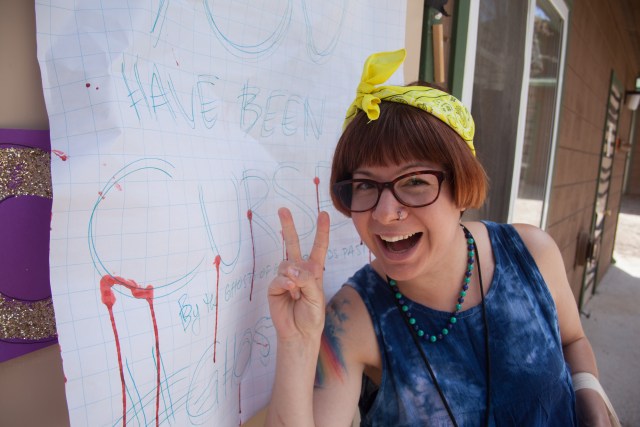 Ali Osworth, Foxes Counselor & Geekery Editor: I have a new favorite in terms of things I run. And that’s Lit Challenge.

Hansen, The Con Counselor & Writer: It was basically quick writing prompts to get our creative juices flowing. It was scheduled for 8am on the last day, so I expected about three people, but a bunch of you showed up! And read things!

Ali: Hansen and I came up with this thing about “maximum output of words on a page in the minimum amount of time” — because writing a story or an essay or a poem is kinda like making a vase. You’re not going to get very far if you have no material to make it out of — so, you won’t get a vase if you’ve got no clay and you won’t get a piece of writing if you’ve got no words. So start with as many words as possible that you just pour out of yourself and then go from there. Shake yourself up. Get yourself out of a creative rut. So we played a bunch of writing games to just make people explore writing that they haven’t done before. And I really enjoyed it.

Hansen: Camper Gavin Greco hit me right in the heartstrings about nine times during that challenge, and all of the other campers who bravely read their work for us inspired me so much. I left that workshop and hung out in my cabin alone and journaled so hard.

Ali: I enjoyed hearing people’s work after. It was just wonderful. There are about a million ways to crash through writer’s block like a super hero and it was so fun just doing that for an hour.

Kai, Panthers Counselor & Calendar Girl: The Interracial Relationship Panel was fantastic. It was the first time we held this particular panel, and I’m so glad we did! We talked privileges and permissions and support within our relationships. We talked meeting the family and swapping cultures and sharing languages. We talked about how unique and how brave our queer, interracial relationships are – and what it’s like to walk in these shoes.

Lizz Rubin, Mockingjays Counselor & Writer: The second Queer Safer Sex session was supposed to be just answering anonymous questions you guys had about sex! It was a blast! I love answering your sex questions and I was surprised how creative you guys are with your concerns. We had an overwhelming turn out to both session.  In fact, it was so big I ended up having too many questions to answer just in the few hours I had. I ended up doing an impromptu answer session outside of Mal’s merch sale! I can’t speak for Mal, but I’m pretty sure they were the most excited they have ever been about anything.

Stef Schwartz, Firebrands Counselor & Music Edtior: During the brilliantly-named Poly Pocket, we discussed different kinds of non-monogamous relationships and ways to keep the channels of communication flowing between us and our partner(s). We intentionally formatted this activity as a discussion instead of a traditional panel, so everyone was able to chime in and offer advice to attendees who asked questions. In the end, the important qualities we stressed for successful non-monogamous relationships are qualities that can apply to any form of relationship – communication and mutual respect.

Rachel Kincaid, Cat Power Counselor & Managing Editor: What do I regret more than not being able to attend Law & Order: Question and Answer Unit? Nothing, I don’t think. I think it’s against the rules to recap a part of camp you didn’t actually go to but I want to take this time to say publicly that I fucked up and I’m sorry.

Whitney Pow, Foxes Counselor: I did the Gender Spectrum Event with Kip, Mey, Dani and Aja, who all shared thoughts, words and ideas about gender and identity that helped me to consider my own gender and identity in my own life. I felt so lucky to be gender exploring with all of them.

Mey Rude, Ghost World Counselor & Trans Editor: First of all, I just want to say how great it was to have as many POC on this panel as we had. So often we see whiteness held up as the norm for what is femme, butch, androgynous and non binary, so this was really cool. Plus it allowed for some conversations and points of view that we otherwise would have missed out on.

Kip, A-Camp Barber: The gender panel was my first time on a panel at A-Camp. I was nervous and also honored to be on it with so many amazing queers. As a trans man relatively new to the game (I had top surgery five weeks before coming to camp. P.S. High altitude is NOT THE MOST IDEAL setting to recover from surgery.), I spoke about identifying as a twink, and about my struggle to find a place for myself in a society with narrow-minded stereotypes about trans*men, cis-men, and men in general.

Mey: I think this was my favorite gender panel I’ve ever been a part of. This year we decided to shake things up by having a quick panel intro and going over just a few topics, then splitting out into several discussion groups around the room and within the audience. This way we could have more in depth conversations about the aspects of gender that affect us personally. I was a part of a group that talked about gender and fatness. It was amazing. I don’t often get to talk to people about that intersection (which is a pretty big one in my life) and all the campers in my group had brilliant things to say. I can’t wait until we get to do this again at the next camp!

Kip: For me, the most magical moment of the panel happened after it ended. We formed breakout groups based on all kinds of topics, from femme visibility to hair, and encouraged campers to come up with their own.

Whitney:  I got to hear stories from the participants and I got to talk to you about what it means to be a gendered person in the world in all different walks of life.

Kip: Campers could pop in and join circles at their leisure, which really allowed for awesome discussion and debate. It was so great getting to hear others’ experiences with their gender. Transitioning in a society that is not quite fully on board is constantly isolating and draining for me, personally. This panel gave me hope that we’re actually all going to be just fine if we stick together and support each other. Kinda cheesy, but I DON’T CARE.

Whitney: Thanks for sharing, and thanks for listening. We couldn’t do any of this without you, and I learned so much from talking to all of you. 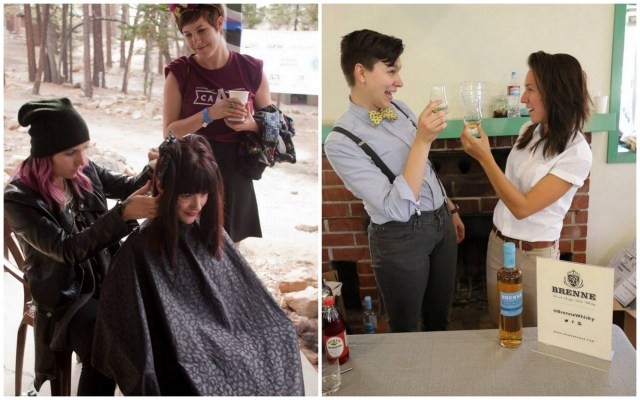 Ali: As always, whiskey tasting is a personal favorite. I love learning about whiskey with Alex Vega, our whiskey extraordinaire. And I love love love making up a cocktail for everyone to enjoy (this time we made a Ward Eight, a classic cocktail created in Boston). I LOVED our sponsor whiskey (Brenne Whisky) this year — it was unlike any other whiskey I’ve ever had. But mostly? I love that we do something that’s traditionally dominated by white straight cis men, but we do it in a queer space with no policing of knowledge or language — just learning, talking and fun. And tasting. Lots of tasting. You don’t have to know something special or be something specific to enjoy this wonderful drink with so much history and artistry behind it. You just have to be willing to jump headlong into the whiskey barrel.

Whitney: One of my favorite things this A-Camp, taste bud-wise, was trying the Brenne whisky that Ali had at her whiskey tasting with Alex. The Brenne Whisky is probably the most delicious whiskey I have ever had, with a lot of depth and flavor and light floral notes to it. It was amazing and my mouth did not know that whiskey could taste this good. I am currently in the process of trying to track down a bottle of Brenne for myself in Chicago – if anyone has any leads, let me know! I will also be on the lookout for a fancy whiskey snifter and a flask, probably of the You Do You variety.

Lizz R.: I missed the whiskey tasting, but I cut through on my way to run another activity and I spotted my girlfriend. It was literally the happiest I’ve ever seen her.