Good Evening Ladies and Gentleman and people who don’t subscribe to the gender binary. Today is August 5, 2014 and THIS is a poetry slam!

Such is the Slam Masters official spiel that began every night from August 5th to August 9th in Oakland, California during the 25th Annual National Poetry Slam. Over the course of five days, 72 teams — an estimated 500 poets — battled it out for the right to be called Slam Champions for the next year. It was an amazing time where art, culture, and community took center stage. 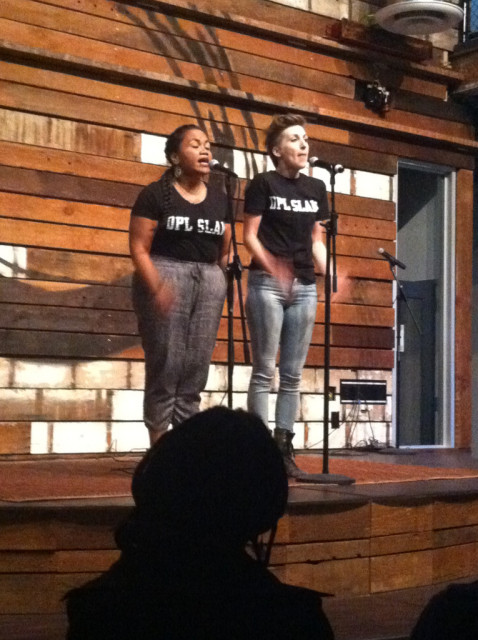 A poetry slam is conventionally defined as the art of competitive performance poetry. Invented in the 1980s by Chicago construction worker named Marc Smith (appropriate audience response: SO WHAT!), slam is a fast-paced competition where poets have a limited amount of time to impress judges randomly picked from the audience. Performers use all tricks of storytelling, songwriting, theatre, stand-up comedy and cold heard poetry to wheedle points out of the judges. 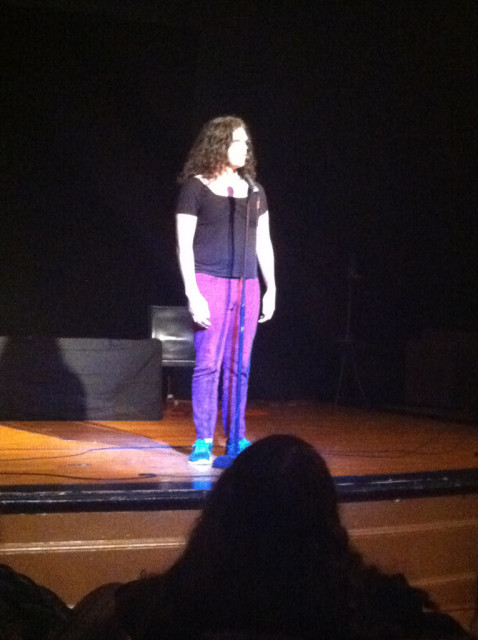 But you must understand the nature of slam poetry. This not just your average poetry reading with people standing stoically reading prose or page poetry. This is a rock show of poetry. This is aggression, fierceness, tenderness, passion, tears and jubilance. It is yelling and howls. It is cadences that take it awfully close to straight up rapping, after all spoken word poetry is the Godfather of hip-hop music. It is funk and sweat and spit flying into the audience. It is heart. It is blood being spilled on a stage. 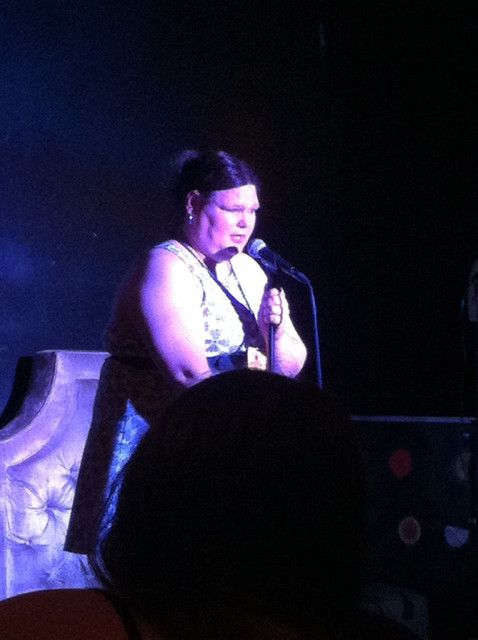 There was something, though, that was brand new about the slam this year. During the Gender Outlaws Open Mic Night, host Lindsay Stone noted that this was the first year the slam had multiple spaces dedicated to LGBTQ and gender non-conforming artists, including the Gender Outlaws Open Mic Night, the day time Queer Open Mic and a writing workshop for queer poets. Excited participants packed Gender Outlaws excited to hear work that represented their gender journey, including Straddlers. Slam co-director Maureen Benson credited the increase in queer spaces to the host city team of slam veterans Dahled Jeffries and Mona Webb as well as the city of Oakland. “Our host city team has been focused on equity. Period. In our programming, our planning, and in our practice we have strived to ensure an event that represents equity for all marginalized people as a way to show the kind of love the Bay Area is supposed to represent.” Benson says. As part of representing the diversity of the slam community and the city of Oakland itself NPS honored 5 veteran slam poets that represent the diversity and various communities within the Bay Area. Two of those poets Daphne Gottlieb and Meliza Banales (stage name Missy Fuego) are queer women. 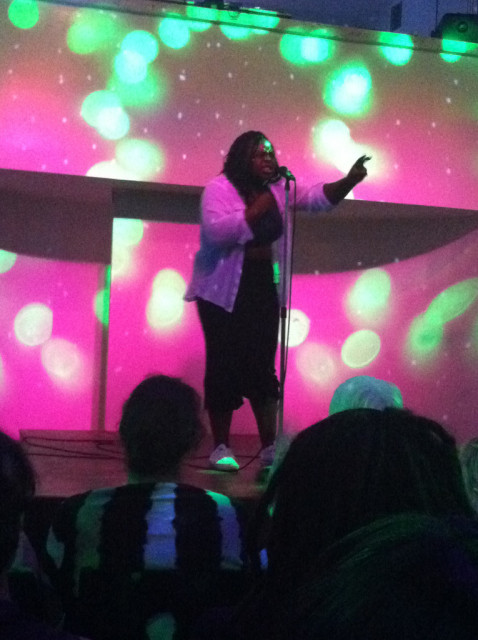 It was more than simply opening more queer-focused spaces, this year’s slam could have easily been titled the little slam that toppled that huge giant called GENDER. Missy Fuego summed up how poetry is the perfect weapon to take on gender. “Poetry is all about deconstructing,” she says. “And gender is a social construct. So it’s only right that we use that.” Poetry became the vehicle by which artists shared how they have experienced gender. Women put themselves in the shoes of victims of gender-based violence. Men discussed what it is to be masculine. Street harassment and the lingering affects was put on display as well as gender policing. There were detailed descriptions of the emotional effects of transitions, the spaces that you are no longer welcomed in, the trauma of being watched and prodded. The dread of continually having to explain. One poet who identifies as a trans woman slammed about the painful ordeal talking to her mother about being the daughter that she always was, not the daughter she became. While another pointed out the coming out process that parents go through with questions like “how can they teach other people’s children when their children turned out like that.” However some performances were humorous commentaries of the taboos surrounding sex and sexuality like the fear of nipples and my personal favorite, the line from Oliver Schminkey and Katie Fleckenstein’s poem that references the assumption that people having queer sex are like zombies, “We eat girls out and then we eat THEM.” 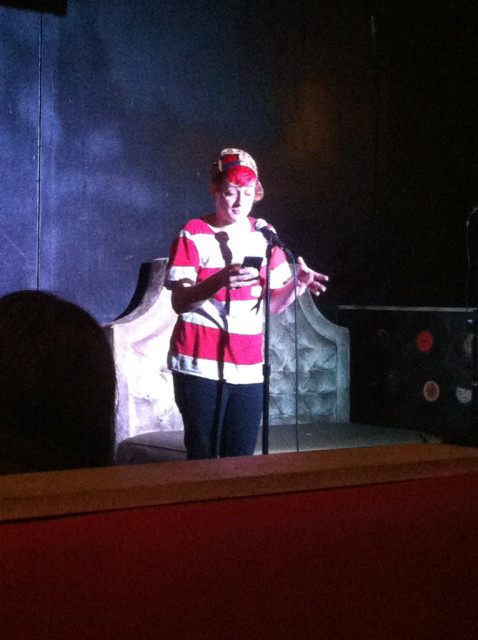 Queer, trans, cisgender and straight men and women. In this space where equity and accessibility were made top priority they all found a space to unpack gender at its core and expose its darkest parts. Josh Aiken and his slam partner from the WU Slam team from Seattle, Washington did an amazing piece questioning what exactly it is to be masculine. He says “I think the role that spoken word and slam poetry play are directly from what Audre Lorde talks about when she says that poetry is not a luxury it’s essential for liberation, it’s essential for revolution. It has to be a part of the work that we do. Poetry communicates things in ways that politicians can’t and community activists can’t. Poets are integral in that work. Especially when it comes to gender. For me it’s always important to think about masculinity and how we’re unpacking and deconstructing it. As someone that identifies as a queer man it’s incredibly important to realize that misogyny is directly tied to homophobia. So if we’re not doing the work to deconstruct gender, then were not doing the work that we need to as it’s related to gender identity or sexuality.” 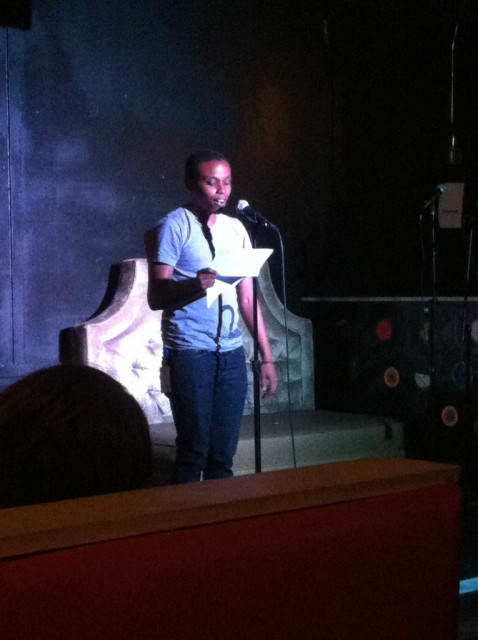 It is well documented that poetry has always been a mirror by which the world has seen the ills of atrocities like racism, sexism and political warfare. Missy Fuego referenced the early years of the slam where they would have multiple workshops and open mics that were split across the lines of race. That this traditionally became how the organization made sure that all of the voices had an opportunity to be heard. But the slam always takes on the identity of the host city, she says. As Oakland has become so very well known for its queer community, business, and events it was only right that the “queering of the slam” occurred in Oakland. The logo for this year’s slam was Oakland’s own city logo of an Oak tree flipped upside down with the branches spreading out wide and a mic perched on top with lightning bolts flaring out. It was entirely appropriate because it felt like the artists settled right into the multi-faceted culture of Oakland, set shop right on to and cut loose a torrent of energy that could be felt way deep down in your soul. At the closing night after party I got to stand atop a platform with co-director Maureen Benson who was honored that night for making the slam possible. We stood on the platform and she put her arm around me and told me to look out at all of those artists dancing and loving each other all in one space. She said that all of it was possible because they made space for everyone. All races, all genders and abilities. This year everyone felt heard and valued. I would have to say that I agree. 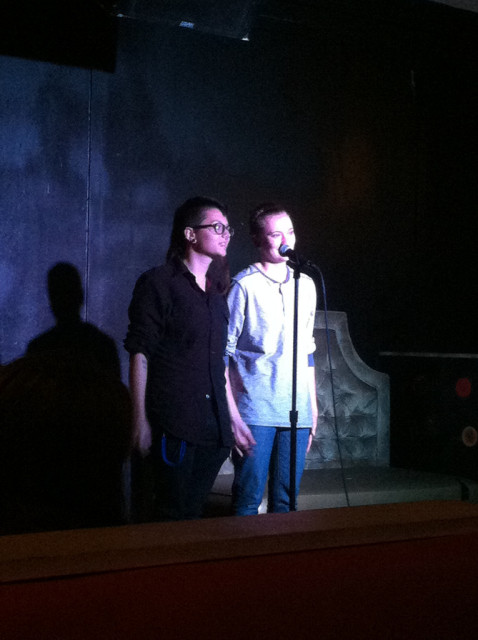