You made it all the way to Friday, and in a week like this, that’s a big deal! Welcome to Boobs on Your Tube!

This week, RuPaul’s Drag Race gave a music video remix to its traditional reunion episode. Don’t forget, tonight’s the finale! On Batwoman, Ryan and Sophie’s inevitable journey from frenemies to lovers continued, and the tension is can’t miss TV! On Supergirl, it was Lena’s first official day as a SuperFriend. In the midseason finale of Good Trouble, Alice got to meet THEE Margaret Cho! We covered Patti Harrison in Together, Together when it premiered at Sundance over the winter, but now it’s officially out and Drew has your review! And HBO Max’s Made For Love is an absurdist feminist sci-fi tale that doesn’t shy away from exploring the abuse and lasting trauma of coercive control.

The TV Team has launched a new series, I Still Can’t Believe, in which we remember the things happened on television that baffle us — in good and bad ways — to this very day. Heather is up first with a timeless classic, I Still Can’t Believe Pretty Little Liars Thought Ankle Rubbing Was Lesbian Sex. She also wrote you a quiz: What Iconic Pop Culture Shoes Are You? 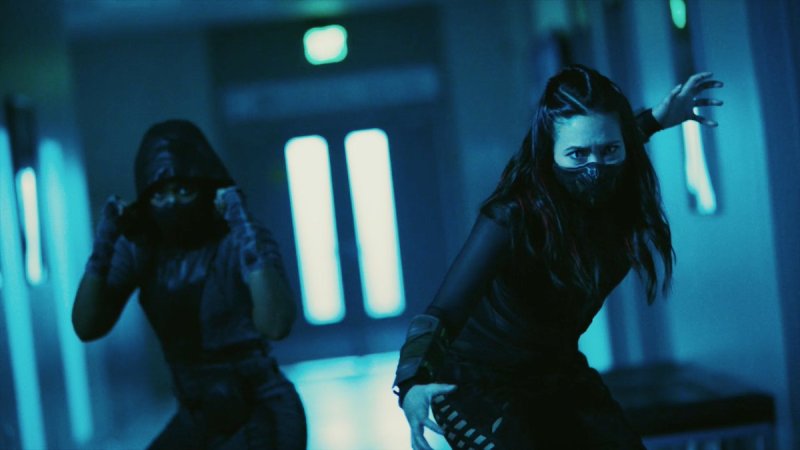 + On Black Lightning this week we had a few developments this week: Anissa and Grace are welcomed home from their honeymoon by the Pierce family with a surprise party (a pretty anti-climatic end to their “secret wedding” plot, but a cute one). Also it looks like a terrifying assassin named Ishmael is after Anissa and when Grace jumps in the fight to help by shapeshifting into a leopard (episode highlight, if you ask me!) he makes note of her meta powers as well, which is definitely NOT a good sign. — Carmen

+ Even though this week’s episode of Station 19 wasn’t heavily focused on gay activity, in my opinion it was a beautifully written episode about the mourning of George Floyd that I thought rivaled the best Shondaland has to offer, and I deeply recommend it. Of specific note is Maya, who once again demonstrating the importance of leveraging white privilege as a queer white woman in power within an institution, a lesson that I hope is felt by many who watch. — Carmen

+ Reminder: the new season of the critically-acclaimed (and hella gay) Black Lady Sketch Show kicks off tonight! Do not deny yourself the joy of watching… after the week we’ve had, we deserve it! — Natalie

+ After being spoiled on Top Chef: All Stars, we’re limited to just one lady gay cheftestant — Maria Mazon from Tuscon, Arizona — in the show’s newest season thus far. We got a small peak into Maria’s home life this week, as she recreated the first dish she ever made for her future wife using Campbell’s soup. She endeared herself to the judges but it wasn’t enough to take the quickfire win. Later, in the elimination challenge, the chefs were asked to create a savory dish using fruit and absolutely no vegetables. Somehow that restricted Maria from using her favorite chilis (peppers are fruit after all) but she was still able to create albondigas that the judges thought were “soulful and savory. She lives to cook another day. — Natalie

+ Some of y’all were wondering if we’re watching Home Economics with Sasheer Zamata! In fact, we are, and Nic will be writing a review of it next week! — Heather 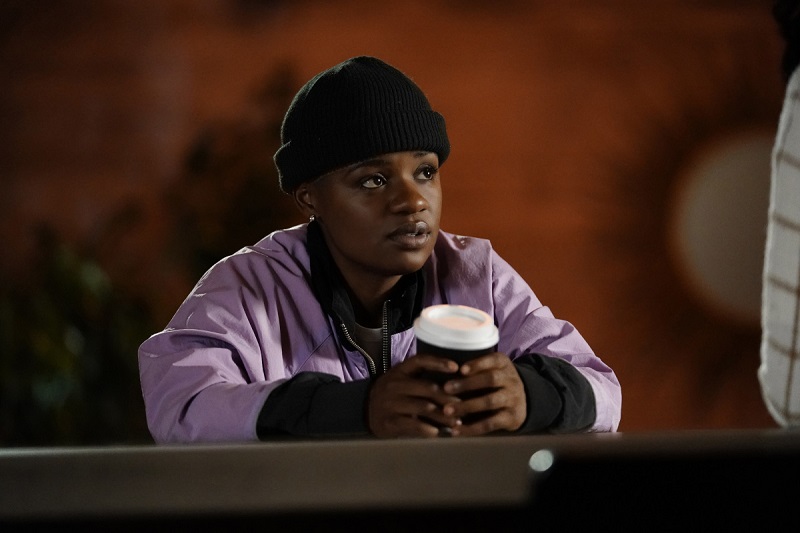 From the moment Coop returned from her summer tour and learned that Tyrone’s sister, Mo, had made her way back to Crenshaw, she was skeptical. No matter how many assurances she got to the contrary or how many good deals Mo did in the community to try and prove otherwise, Coop was convinced Mo secretly harbored a revenge fantasy. People criticized her for being paranoid and dismissed Coop’s suspicions as wild conspiracy theories, but as it turns out, Coop had cause to be worried. Mo’s been playing the long game: waiting for the moment when Coop finally lowered her guard so she could pounce.

But I’m getting ahead of myself… let’s back up.

This week, Coop’s working at the Slauson Cafe when Mo interrupts with legal documents for Patience to sign. Coop explains that Patience is still on tour but she’ll take the files and pass them along. Mo resists the offer which leads Coop to question her motives (again). Coop’s convinced that Mo hasn’t changed even if everyone else can’t see it. Mo dismisses Coop’s accusations and then drops Patience’s papers on the table. Coop takes the files over to Layla and she confirms it’s the news they’ve been waiting for: the dissolution papers for Patience’s contract with Layla’s father.

Later, back at the Cafe, Coop happens upon a group of organizers preparing for a rally. The group’s seeking justice accountability for Tamika Pratt’s death at the hands of police officers. Mo’s representing the Pratt family and the knowledge of that softens Coop’s perspective on her. She admits that she never really gave Mo a chance to prove she was anything more than what she’d done in the past or who her brother was. The show draws an absurd parallel between the profiling done to Tamika Pratt and Coop’s suspicions about Mo, which is even more galling when you consider where the show is headed. Mo thanks Coop for the acknowledgement and they agree to squash their beef… but as soon as Coop’s back is turned, Mo gloats, “She finally let her guard down.” 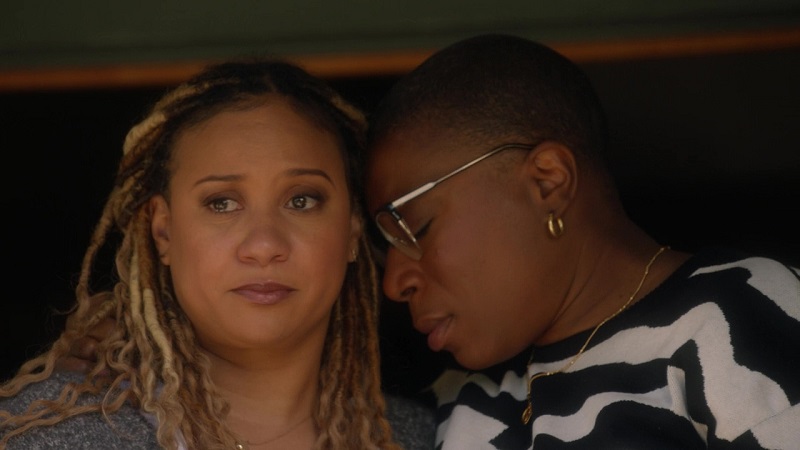 Usually, 9-1-1 is full of excitement — the first responders of Station 118 rushing from one cataclysmic event to the next — and while the saves are always harrowing, you’re able to compartmentalize the worst of it because the victims disappear soon after they’re found. Not this week, though… this week, 9-1-1 put fans through the emotional wringer. At one point during this episode, I yelled back at my TV, “who do you think you are with this? Shonda Rhimes?!”

After the social worker leaves, Karen tries to calm her wife down but to no avail. Hen doesn’t understand how Karen can be so calm as the state tears their family apart but Karen reminds her this if what they signed up for as foster parents. Hen won’t accept that — she didn’t sign up to feel like this — and insists that the state taking their daughter away is wrong. It’s interesting to see the ways in which the roles have flipped since the last time the couple “lost” a child: Hen’s as invested in the idea of a family with Nia as Karen was with their embryos.

With so much out of her control right now, Hen redoubles her efforts at work. After Station 118 pulls Chimney’s brother, Albert, from the wreckage of a car accident, she refuses to let him die when he codes in the ambulance. She pulls off the miraculous save but, when she comes home, Hen’s confronted by the fact that she can’t save her family from what’s coming. She blasts Karen for accepting their fate without even putting up a fight.

“There is no fight. She has a mother. She’s not ours, even if we love her like she is,” Karen says. “I’m holding on. That is all I am doing, holding on. Please don’t make me do it alone.”

And, of course, Hen doesn’t: she’s right next to Karen as they send Nia on an overnight visit with her birth mother. 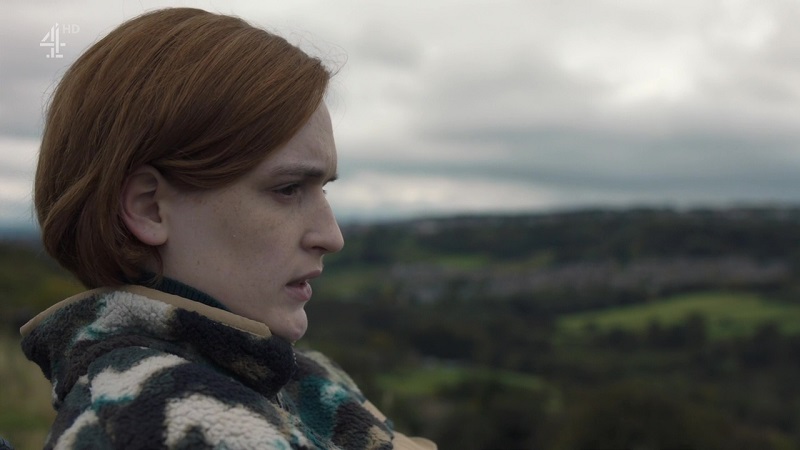 When Channel 4 announced a new series of Ackley Bridge, I was a nervous: for three seasons, the show had been centered around Nasreen “Nas” Paracha and it was hard to imagine the show without her. Nas had been such a unique presence on television — lesbian, Pakistani, Muslim — and I worried that Ackley Bridge wouldn’t be able to sustain that level of representation. But then, Channel 4 announced that not only would the show be back, it’d move from eight one-hour episodes to 10 half-hour episodes. Nervousness shifted to dread. I was convinced there was no way they could pack Ackley Bridge‘s nuance and humor into just 300 minutes. But the show returned to television this week and exceeded every expectation I had.

Even without Nas at its center, Ackley retains its identity. It showcases South Asian and Muslim kids in a way that’s really unprecedented on television and this season adds Romani representation to its ranks. The show also remains committed to telling queer stories: Nas’ ex-girlfriend, Sam Murgatroyd, is still part of the show’s canvas. This series, Sam still desperately wants to be loved by her family but she also wants to be a good person…. and being a Murgatroyd and being a good person often conflict. In the opening episode, she establishes a rapport with Nas’ cousin, Tahir, and the pair become an unlikely set of mates.

Also? One of Ackley Bridge‘s new characters, Fizza, is drawn into the LGBTQ community because of her gay father. Fizza’s mother reacts differently: immersing herself in her faith and bringing the fight against LGBT-inclusive education right to Ackley Bridge’s door. 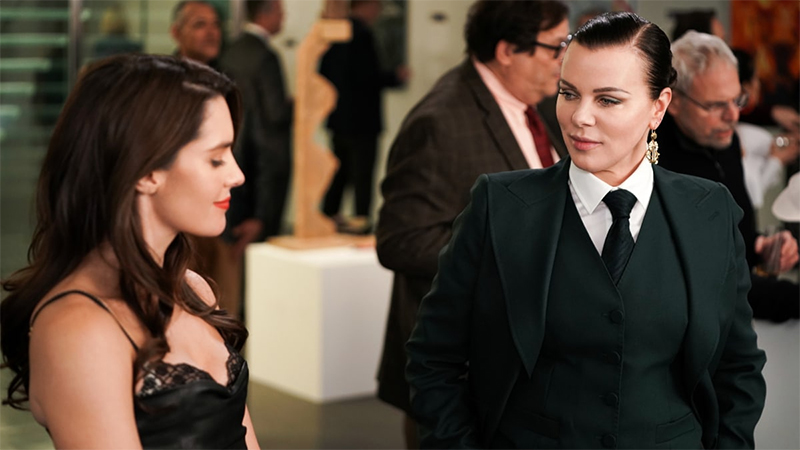 The final season of Younger is upon us, and five episodes in, Maggie’s finally got a storyline! It’s the most Maggie storyline imaginable! Maggie’s mostly been hanging out with Liza and helping her work out her boy problems, and helping her come up with book pitches (for example, The Kama Surf-tra, a sex surfing biook), and also designing tattoos for Josh. But this week, she meets Janeane Garofalo, who plays a character named Cass, who just happens to be the dean of a liberal arts college in NYC. (It’s somehow kind of weird Janeane Garofalo only just now appeared on this show, right?) Well, Cass and Maggie really hit it off, platonically, and Cass ultimately ends up offering Maggie a teaching position. It’s a huge career step for Maggie, and one that will allow her to continue to make her own art.

But of course there’s one small hang-up. Maggie met a super hot lesbian at a party where she was all dressed up in a three-piece suit. They went back to Maggie’s place. They had a very good night together. Also the woman happens to be Cass’ wife. 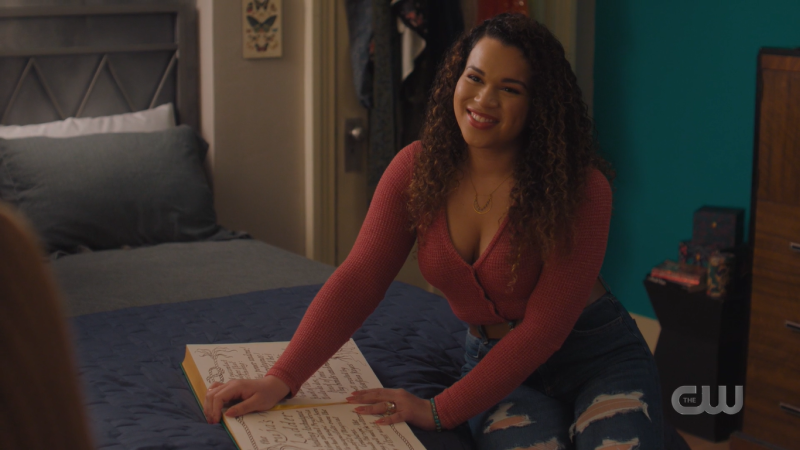 This week, the Charmed ones are tired and weary from chasing down the demons they accidentally released last week. Josefina wants to help, and even offers a spell she wrote using knot magic, but Mel doesn’t think her cousin is ready and tells her to stay home instead. When some ancient beings appear in their safe space, they use the knot to (very successfully!) tie them up and put Josefina in charge of guarding them, but Josefina thinks they can give her some magic so she unties them. It turns out to be the right move, and absolutely what any one of the sisters would have done when they were first starting up, but these beings, called the Perfecti, can’t actually bestow magic, only borrow it.

In the end, Mel tells Josefina that she’s a witch, no matter what anyone tells her, no matter what happens. The truth is, her knot spell worked, and Mel doesn’t care if Josefina can never do magic beyond writing spells and making potions, that’s plenty in her book. She also shows her the literal book, the Book of Shadows, and asks for Josefina’s help filling it back up again. I do hope Josefina finds her own magic eventually, but I’m glad she’s still going to be an asset to the sisters in the meantime.

The TV has written 187 articles for us.