Season Two of Faking It ended with Karma once again breaking the heart of her best friend, Amy, who isn’t sure if she’s a lesbian or bisexual or somewhere in-between but knows one thing for sure: she really wants her best friend to be her girlfriend. They’re certainly not the first TV characters to walk this lonely road. Let’s look at other pairs who’ve walked this lonely road and how that worked out for them exactly, on a scale of “Heartbreaking” to “Heart-warming.”

***THIS POST IS CHOCK-FULL OF SPOILERS!! READ AT YOUR OWN RISK***

“Lesbian or Bisexual woman Falls For Her Best Friend” Storylines, Ranked In Order From Most Heartbreaking to Most Heartwarming 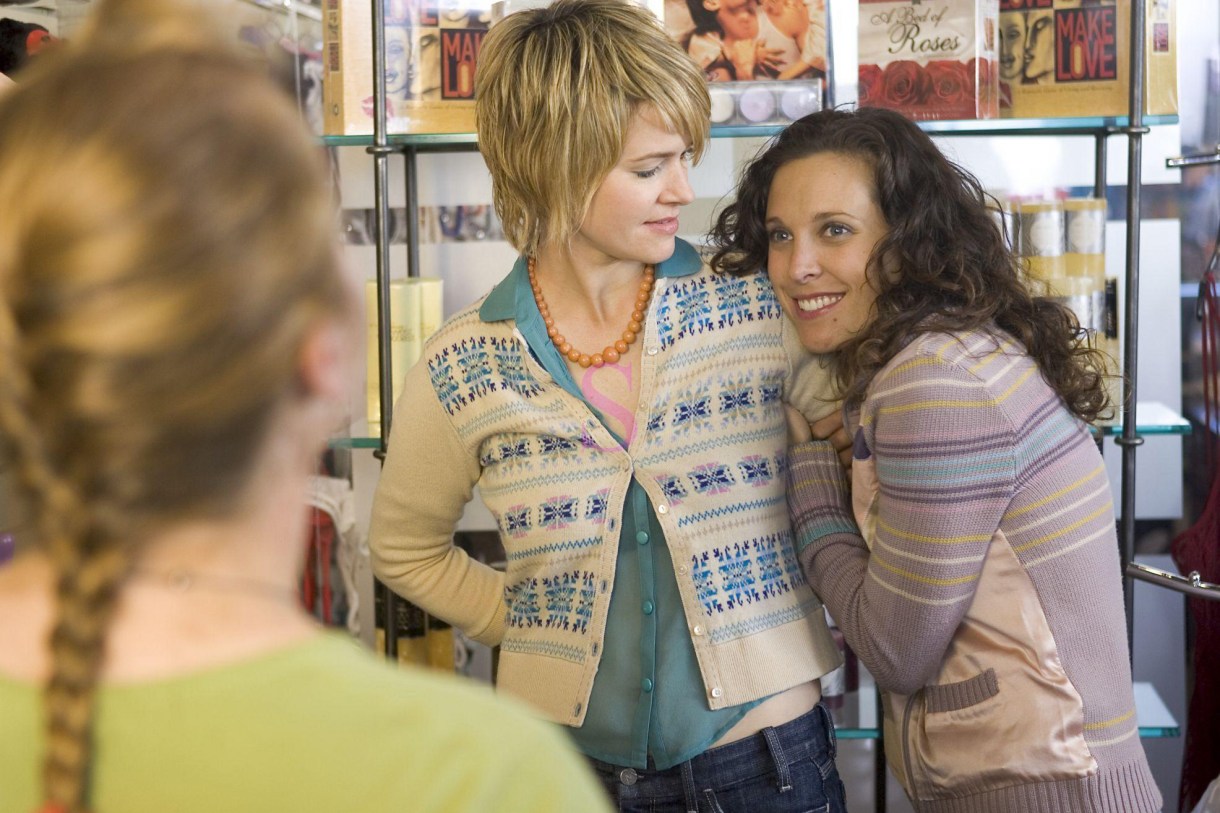 The saddest story on this list actually involves two queer characters — Alice (who identified as bisexual) falls for her best friend, Dana, and tells her so after Dana announces to their friends that she’s gonna marry Tanya EVEN THOUGH TANYA KILLED MR. PIDDLES. After months of sexual tension which eventually explodes and becomes a full-fledged sexual affair, Dana finally leaves Tanya, Alice and Dana get together, and Alice has never been happier! They’re the cutest! But Alice quickly finds herself the one slightly more in love, and there is no agony like the agony of being slightly more in love. Oh wait — yeah there is — it’s the agony of your girlfriend leaving you for her ex AND THEN DYING OF CANCER. 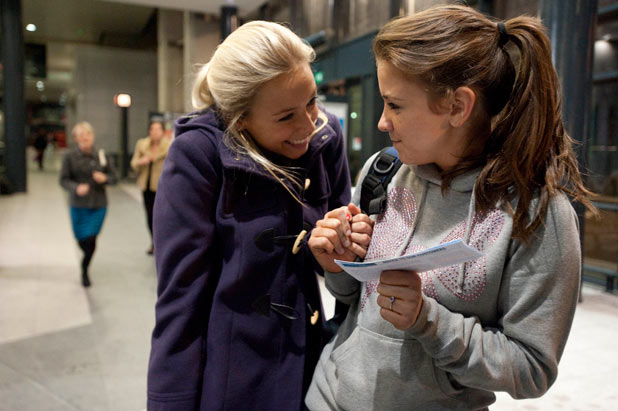 Sophie and Sian’s love story snuck up on both of them — they were in the middle of a fight over a boy when Sophie kissed Sian and told her she was more important than any boy could ever be. After a rocky start, their best friendship turned romantic. They basically lived the dream all lesbians have about the best friend they’re in love with — that she returns your feelings, endures all the coming out drama, and looks at you like you’re the best thing that ever happened to her. They worked through a lot of Lesbian Relationship Tropes, sold us on their chemistry… and then broke up ON THEIR WEDDING DAY because Sophie is terrible. Sian left the show. I cried.

7. Shane and Jenny, The L Word 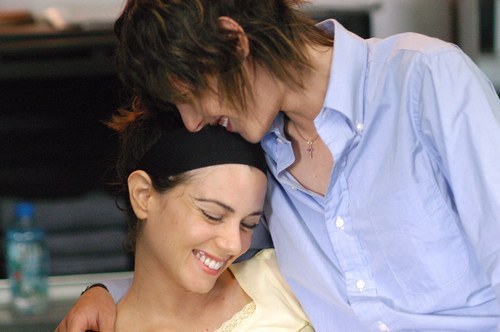 You can’t really blame Shane for responding to Jenny’s confession that she was “just like all those other girls” who’d fallen for Shane. She had no way of knowing Jenny’s character was gonna be written right off the rails in Season Six! Sure, she probably wasn’t your favorite in prior seasons, either (I’m a Jenny fan personally but we don’t have to talk about it) but Season Six, man. SEASON SIX. Then Jenny died and Shane was like, “meh” because nothing about episode 608 made a lick of sense. 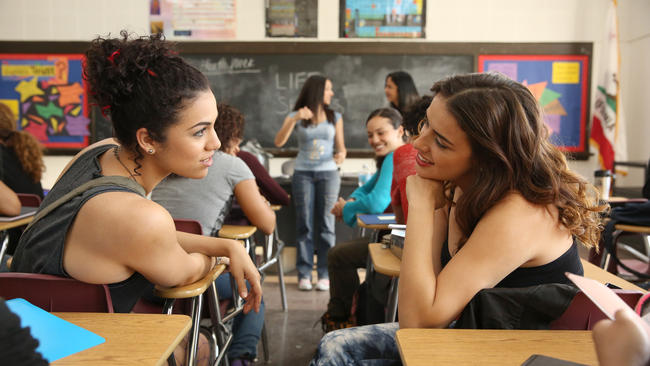 Camilla and Jocelyn had that classic good girl (Jocelyn) bad girl (Camilla) friendship — and then they kissed, and then they made out, and then they made out some more… but the deeper it got, the more Camilla wanted to act like it wasn’t that deep. Then Camilla committed the most mortal lesbian-falls-for-her-best-friend sin — she leaves Jocelyn for a guy (her brother, at that!), makes it clear she’d never actually date a woman, and then OUTS HER BEST FRIEND TO THE ENTIRE SCHOOL. (And, in turn, her slightly homophobic family.) Nothing like a good ‘ol public shaming for daring to have real feelings for a girl! We get a moment of sweet revenge when Jocelyn’s brother finds them in bed together again, and eventually Jocelyn moves on and dates girls who like her back. But that outing, man. Not cool. 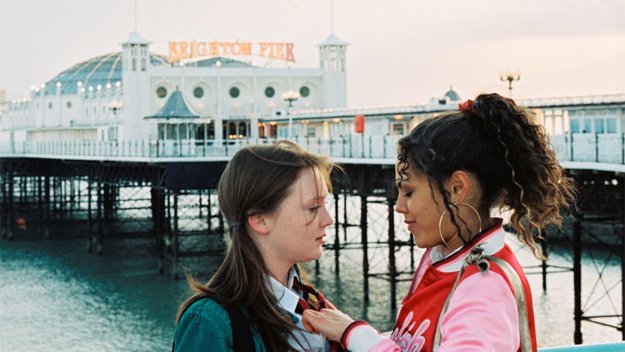 “I’m sexually obsessed with my best friend Sugar,” Kim tells us from the get-go of the short-lived British show Sugar Rush. Kim is more than ready for the trouble Sugar keeps getting her into, and tags along as Sugar blows through drugs, alcohol, boyfriends and hookups. Everybody’s sex-obsessed, everybody has crabs, everybody’s family is a mess, everybody breaks laws, it’s your classic teenage love story. Kim openly manipulates Sugar to get more of her attention, tricks her into kissing her, feels Sugar up while she’s seemingly passed out and sabotages Sugar’s relationships. Not that Sugar’s a pillar of kindness and decency herself — AfterEllen‘s LezBritain called her “the kind of unstable, exciting mess that attracts a disproportionate amount of otherwise sensible lesbians.” Then Sugar figures out the truth — that Kim “fancies” her — and thus begins the endless torturous process of Sugar playing with Kim’s heart. There’s kissing, there’s sex, there’s prison time, jealousy, games, drugs, all of it. When Kim finally moves on and finds another girlfriend, Saint, Sugar’s presence still looms large. I’ve been reminded of these two more than once during Faking It‘s run, although Amy and Karma’s life is practically Amish compared to Kim and Sugar’s. But you know the deal — Sugar always has a man on her arm but can’t stand it when Kim’s got a woman on hers, and if the show had lasted past two seasons, Sugar would’ve had to face her real feelings. But it didn’t, so, the end! At least nobody died.

4. Poussey and Taystee, Orange is the New Black 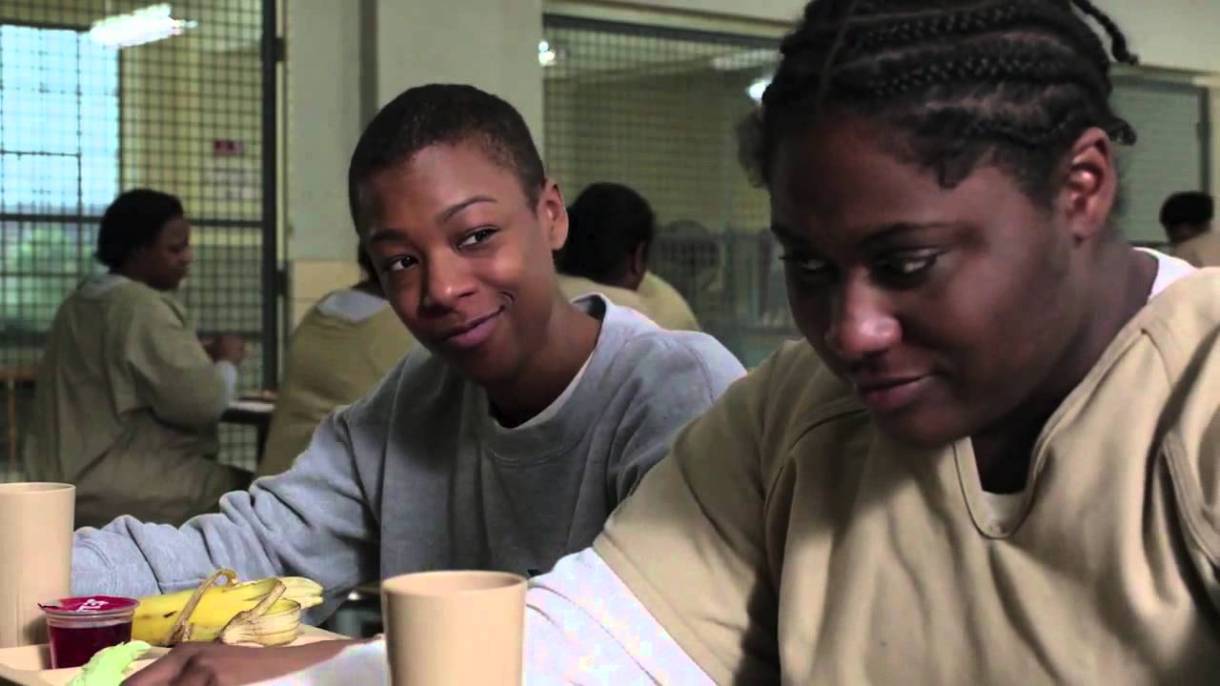 Prison is pretty lonely all around, but Poussey, our sensitive soul and eternal crush, seems to feel that even harder than the rest of them. Her best friendship with Taystee is often the only thing that gets her through, and it’s no surprise that she eventually develops a crush. Taystee herself is pretty polite about declining Poussey’s affections — even after Poussey kisses her unexpectedly, she actually apologizes for not being a lesbian and offers to cuddle instead. Taystee could make it a thing, and she actively chooses not to.

Then Vee shows up and makes something tender into something ugly. All Poussey wants to do is protect her best friend from a toxic relationship but Vee blames Poussey’s concern on her lesbianism, scowling, “Taystee will never love you. Not the way you want.” That shit wounds, y’all. Having an unrequited crush is hard enough, but having it thrown in your face to embarrass you when you’re just trying to protect somebody you love, regardless of how they love you back? Cold. So cold. It was a tough season to watch.

Bless us all that Taystee eventually saw the error of her ways and returned to the friendship, and that in the Season Three finale, it looked like Poussey might have found somebody to kiss and cuddle. 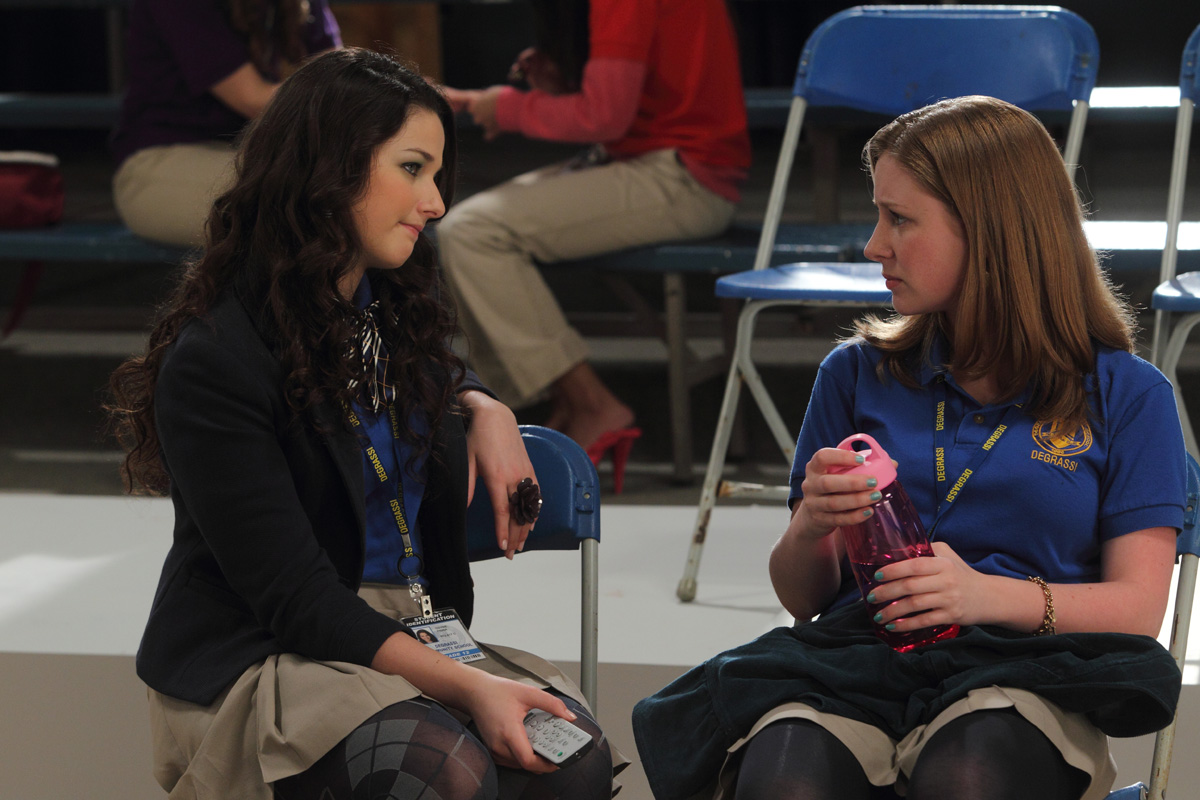 Oh, Fiona. Her ex-boyfriend was an abusive douchebag, she’s a loner, she’s a teenager who’s already discovered that she’s an alcoholic and been in and out of rehab — and, through falling in love with her best friend Holly J, she realizes she’s a lesbian. Honestly Holly J put me to sleep from the moment I laid eyes on her, but whatever. She takes it well when Fiona comes out to her, but when a mutual friend reveals to her that Fiona’s got a Big Fat Lesbian Crush on her, she doesn’t really know how to handle it, besides to stop “leading Fiona on,” which manifests itself in cancelled sleepovers and asking somebody else to zip up her dress — which of course, just pisses Fiona off. It could be humiliating, but Fiona rises to the occasion: “I know we’ll never be together, I’m not stupid… stop treating me like a Faberge egg and get over yourself!” She does. Holly J remains the straightest straight girl to ever follow her arrow, Fiona finds other girls to date, and we all grow as human beings. 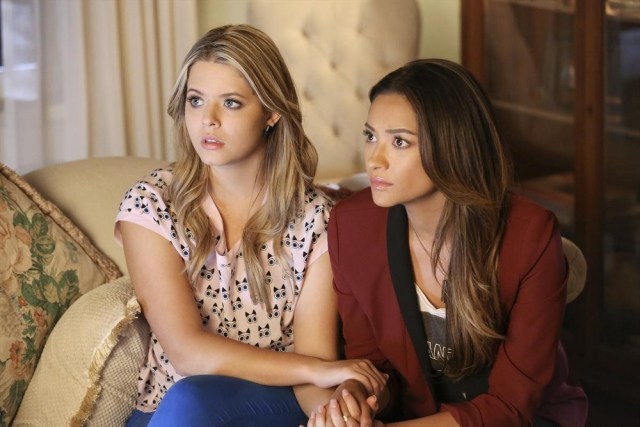 The questions gay girls ask themselves when falling in love with their best friends — could she be queer too? could she like me-like me back? — were even more complicated when Emily Fields started having feelings for Alison DiLaurentis. Why is she such good friends with that old witch? Where’d she get that airplane? Can she freeze time? How come she only owns that one yellow tank top? And then, after Emily kissed her, and Alison invited Emily to move to Paris to be her lesbian lover, things got even more dicey. Is Alison dead? Wait, is she a zombie? Wait, is she immortal? (No, no, maybe.)

By the time Alison rose from the grave, Emily had already answered nearly every question about her own sexuality by dating the hundreds of thousands of lesbians and bisexual women in her high school — but she still wondered if Alison had been for real about having gay feelings for Emily, or if it was all just a part of her tangled web of lies and masks of her own face. So, Alison took matters into her own hands and told Emily that she was serious all those years before she died, and now she was serious post-resurrection: She was never just kissing Emily for practice! And so they kissed again and again and also had some sex.

It maybe could have been forever love, if Emily hadn’t accused Alison of bludgeoning one of their classmates to death and thrown her into jail with her bare hands and then been kidnapped after the murder trial and trapped in an underground bunker with the girl she thought Alison killed pretending to be Alison. Sometimes life just gets in the way, you know?

It didn’t work out super well for Alison and Emily, but their exploratory smooching led to Emily being the most prolific lesbian dater in Pennsylvania and to them sharing one special night and one lifelong bond. You don’t just wear a necklace made of your fake dead fake ex-girlfriend’s fake teeth and come away unchanged. 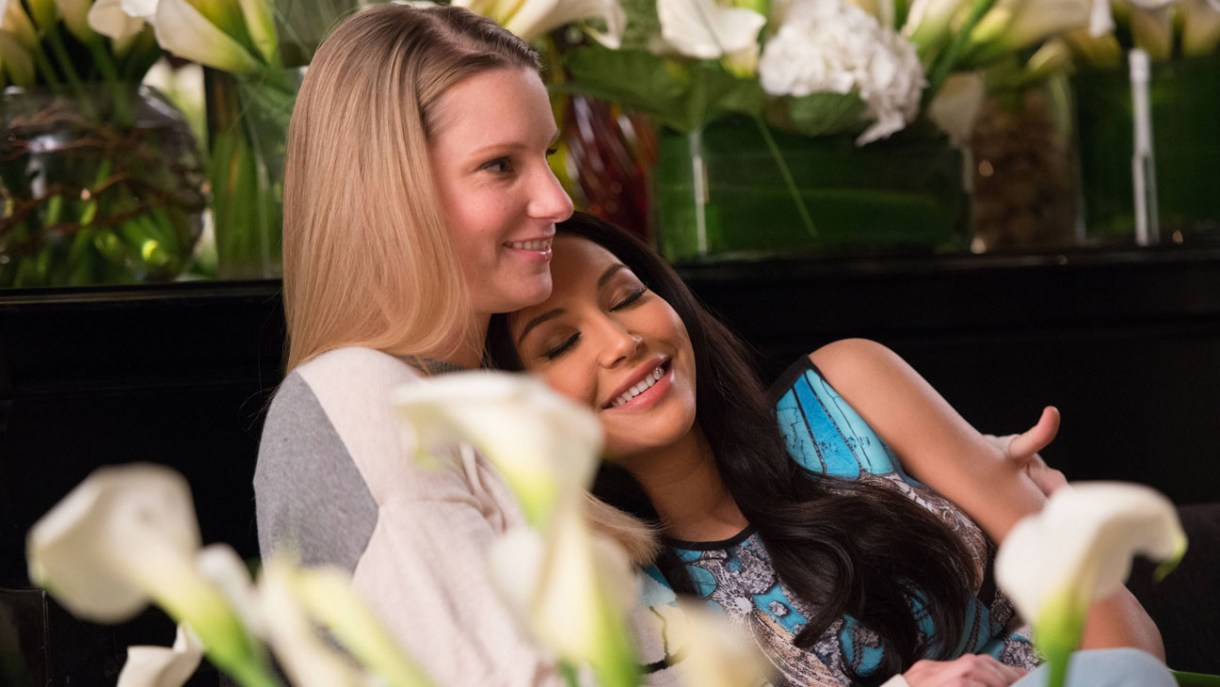 Santana and Brittany’s best friendship already involved scissoring before Santana’s feelings for Brittany enabled her Big Lesbian Revelation. Luckily, Brittany already knew she swung both ways, but less luckily, was already in a relationship with somebody else (Artie). But that eventually ended, and it was Brittaina time — until Santana left for college and the two drifted apart, eventually breaking up. But they finally got back together and got married just in time for the show to go off the air, leading us all to safely assume that they lived happily ever after. See, kids: one time out of nine, it actually works out!