In honor of Octavia Butler’s 73rd birthday on June 22, this month’s Ask Your Friendly Neighborhood Lesbrarian features eight speculative books by Black authors about Black futures. It’s impossible to overstate the ongoing impact of Butler’s work in the science fiction field generally and specifically for Black speculative writing and Afrofuturism. I want to highlight a few of the Black authors continuing her legacy.

At this moment in time with uprisings against anti-Blackness happening in the US and all over the world, it feels urgent to focus on Black authors who are imagining Black futures. As N.K. Jemisin writes in her incredible Broken Earth series (more on those books below): “some worlds are built on a fault line of pain, held up by nightmares. Don’t lament when those worlds fall. Rage that they were built doomed in the first place.” Let’s look at eight books / series, including by Jemisin, that imagine what happens “when those worlds fall.” 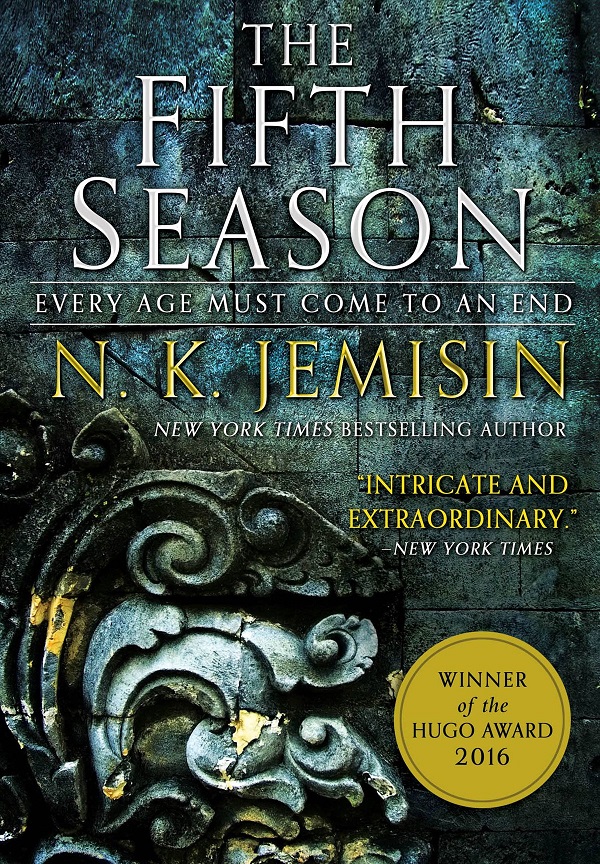 N.K. Jemisin’s trilogy, which begins with The Fifth Season is one of those speculative series that explodes previous notions about what fantasy and science fiction could be. Each book in the series deservedly won the Hugo Award every year it was published. It’s set in an alternate world with eerie and complex parallels and reflections to our own. It is very much about what happens after the world as we know it ends. The story takes place on a continent where “Father Earth” is angry. Its people are under threat of extinction via earthquakes, volcanoes, and other natural disasters often enough that the idea of apocalypse hangs over them like a cloud. Some people in this world, including most of the main characters, have a gift / curse, of being able to move and control the forces beneath the earth’s surface. They are the people in this world “who have to fight for the respect that everyone else is given without question.” The cast is majority Black, with significant cis queer women and men characters and a standout trans woman character. (Also don’t miss Jemisin’s short story collection, How Long Til Black Future Month?)

The Prey of Gods by Nicky Drayden 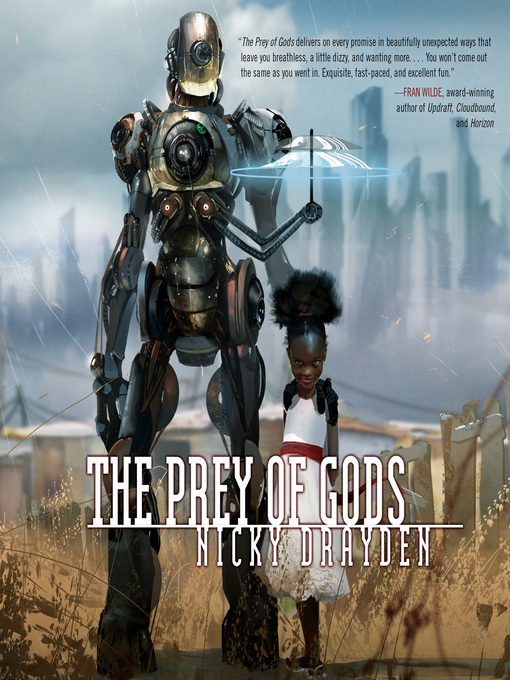 For something completely different, even for SF/F, try The Prey of Gods. Set in a future South African town, Port Elizabeth, with a booming genetic engineering industry, it features a previously powerful demigoddess, Sydney. Sydney is completely magicless and working a thankless job at a nail salon but she has a plan to fix that: murder lots of people, drink their blood, and thus reacquire her powers. A host of other characters are there to try to stop her. They include a pop star, a politician, a Zulu girl with recently discovered magical abilities, and a queer teen with mind control powers. This is complicated enough. Now imagine the other elements Drayden has brilliantly melded into the story: an AI uprising, hallucinogenic drugs, and interspecies love. The Prey of Gods is just as lovably weird and wacky as it sounds. 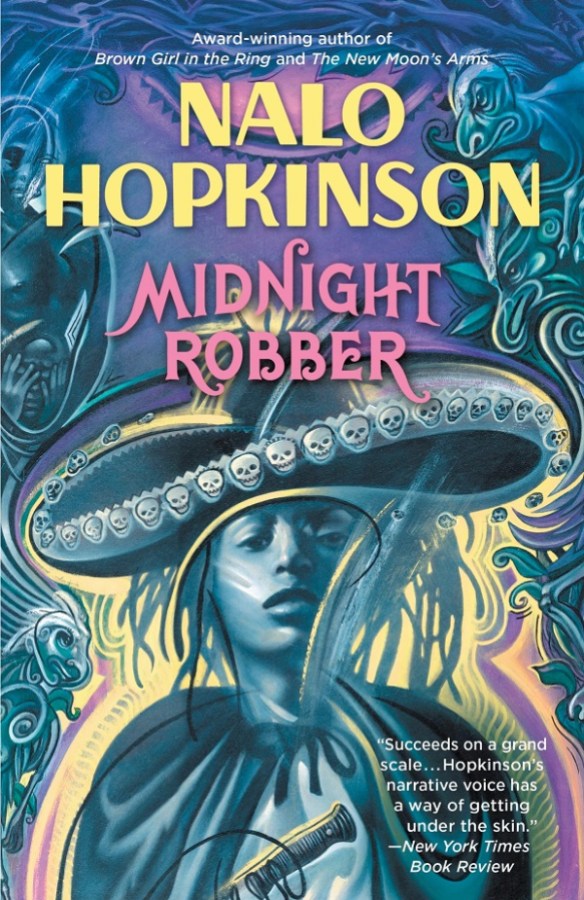 Tan-Tan is a 16-year-old citizen on the Caribbean-colonized planet Toussaint. She’s happy to be celebrating at Carnival, where masked folks in “Midnight Robber” costumes capture the imaginations of partygoers with entrancing stories. But when Tan-Tan’s father, sick with power, commits an unspeakable crime, she and he are thrust into an alternate, brutal world called New Half-Way Tree. In New Half-Way Tree, all the monsters from the folklore Tan-Tan grew up on are real. Humans are exiled in the wilderness, committing acts of violence. Here Tan-Tan must learn that Midnight Robbers are real, and that she herself must become the Queen Robber. Only with the Queen’s powers will she be able to set herself free. Hopkinson uses the opportunities of speculative fiction to address the trauma of childhood sexual abuse, identity splitting, and healing. She also masterfully blends different Caribbean dialects to tell the story in gorgeously unique language.

The Space Between Worlds by Micaiah Johnson 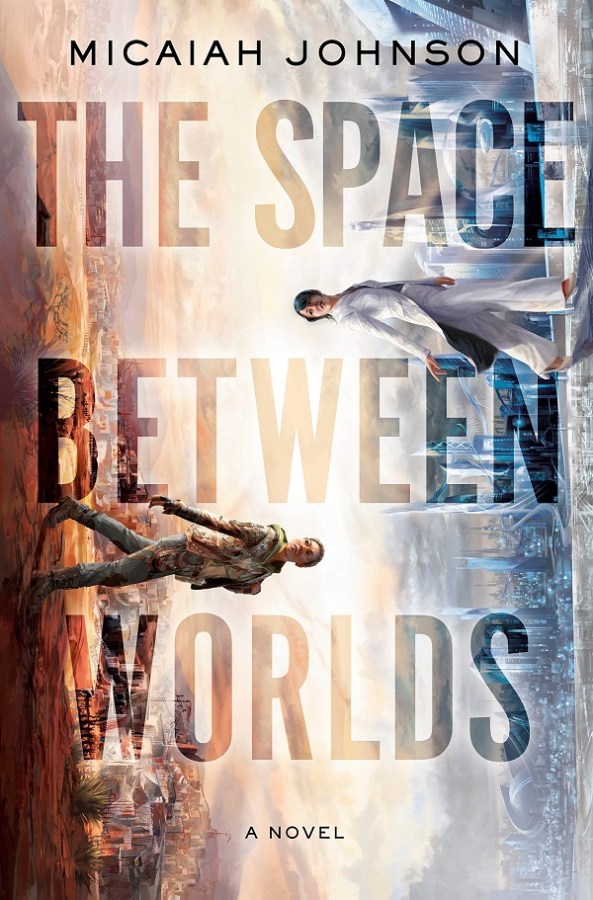 Pre-order this book now so you can make sure to read it as soon as possible after it comes out August 4th! In Cara’s world, multiverse travel has finally been made possible. The only caveat is that you can’t visit any universe where your counterpart is still alive. Cara, whose other selves seem to have a propensity to die, is a perfect candidate for multiverse travel. She is taken from the “wastelands” of poverty and given an apartment in the wealthy walled-off city. She works (and flirts with) her handler Dell, as the two women work together collecting data from other verses for the shady Eldridge Institute. But when one of Cara’s remaining doppelgangers dies suspiciously, a secret plot that endangers every multiverse is revealed. This novel is at once an action-packed adventure of crossing dimensions and an intimate investigation into themes of identity, belonging, and privilege. 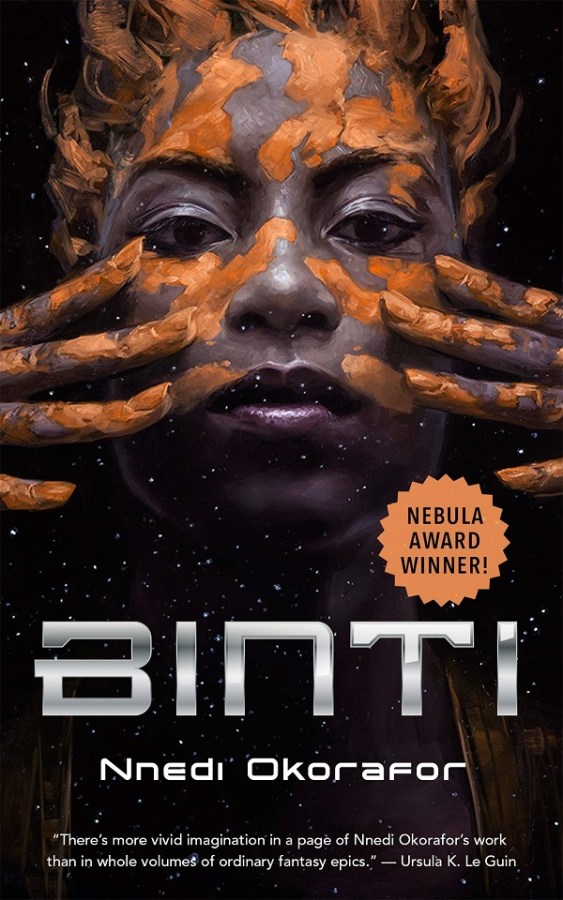 The journey of the titular character Binti throughout the trilogy is beautiful and complex. Binti is a young Black woman of the Himba people, who ordinarily do not leave home. In the first novella, Binti is leaving to attend Oomza University in Kush territory, the best in the galaxy. She’s not sure how she will continue her people’s customs, which are rooted in the land of Namibia. At the university, which is only five percent human, she will be the only Himba person. On her spaceship’s journey, however, they are attacked by the Meduse. Although the Meduse are committing violence, Binti along with readers learn to empathize with them. The Meduse, in fact, are attempting to reclaim a “stinger” belonging to them that has been stolen and held in a Kush museum. Okorafor brilliantly explores issues of cultural appropriation, the difficulties of being forced to represent your entire culture, evolving identity, and inter-cultural (and species) friendship.

The Wormwood Trilogy by Tade Thompson 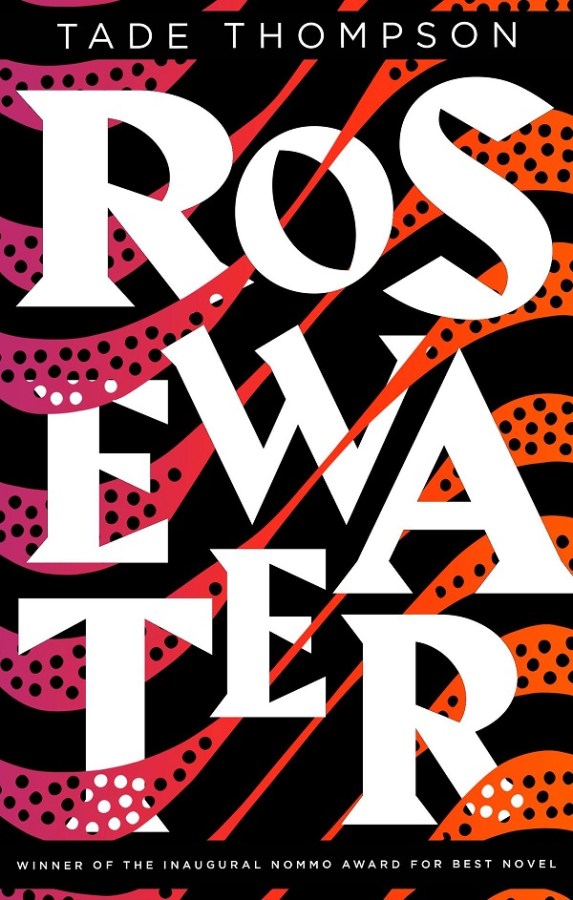 It’s 2066 in Nigeria and the town of Rosewater — also the title of the first book in this series — is literally and figuratively on the edge. The community there has formed around an alien biodome. Those who reside there are hoping for a glimpse inside the dome, eager for the healing powers that reside there, or both. The dome only opens once a year. Kaaro is a former criminal, current government agent. He’s been inside the dome and is rather cynical about the whole thing. In the day Kaaro provides psychic protection for a bank. But at night, he works as the most powerful psychic in a secret agency called Section 35. But as other fellow psychics begin to die one by one, Kaaro will be forced to defy the agency and investigate. He might be next. Aliens, mind reading, murder, a little bit of romance — what more could you want?

The Weight of the Stars by K. Ancrum 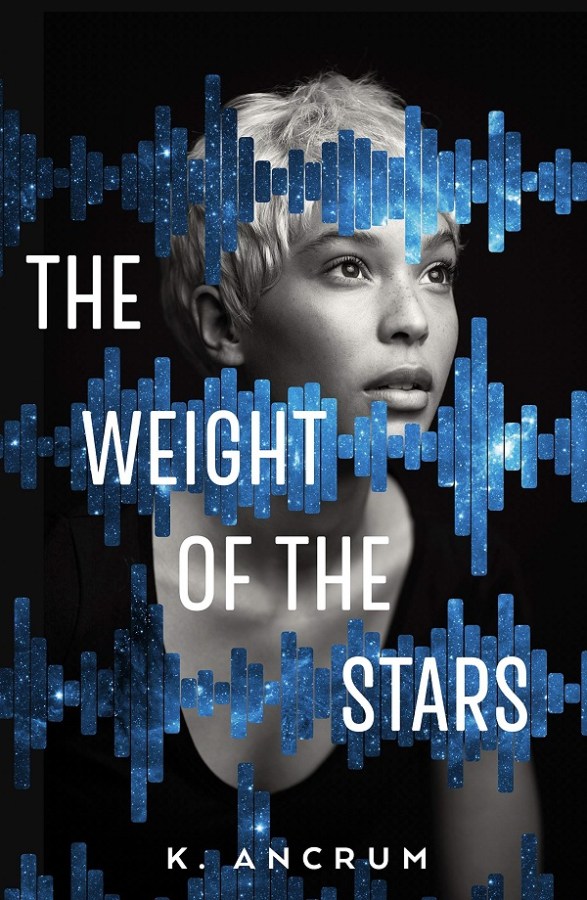 The Weight of the Stars is an existential YA love story about Black, Brown, and/or queer teens and outer space. If you’re not sold from that sentence alone, here’s more: Alexandria is a queer Black and biracial teen. Her mom is an astronaut who has volunteered for a one-way trip to the edge of the solar system, leaving her daughter behind. After an accident that leaves her with a broken arm, she needs nightly help to get up onto her roof to try to catch radio signals from her mom. Enter Ryann, a butch white girl who dreams of travelling in space but is held back by poverty. Instead she spends her time gathering misfits and folding them into her found family. Ryann has tried to befriend prickly Alexandria, to disastrous results … the aforementioned accident. The subsequent story is a slow-burn romance that edges more and more into science fiction territory as it goes on. Shout-out to one character’s poly parenting triad and Ancrum’s gorgeously poetic writing. 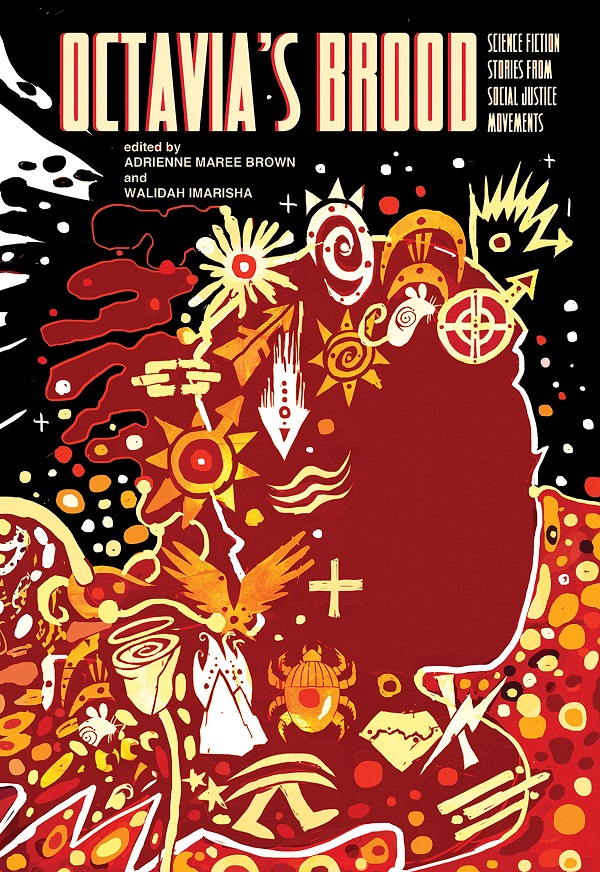 In this unique anthology, adrienne maree brown and Walidah Imarisha have gathered a diverse group of social justice organizers and activists to write speculative short stories. The tales span from sci fi to fantasy, horror, and magical realism, but they are all occupied with the idea that the world could be different. The editors argue that as organizers and activists envision a world without war, prisons, racism, police brutality, and more, they are already creating visionary speculative fiction. In Octavia’s Brood, they are simply doing so more overtly. As the anthology’s name declares, these pieces follow explicitly in the footsteps of Octavia Butler, nodding to her ground-breaking Lilith’s Brood trilogy. Contributors include Leah Lakshmi Piepzna-Samarasinha, LeVar Burton, Tananarive Due, and more.

There are many, many books that aren’t on this list, including a few books I’ve recommended multiple times before, like An Unkindness of Ghosts by Rivers Solomon. Please share your favourite speculative books by Black authors about Black futures in the comments!