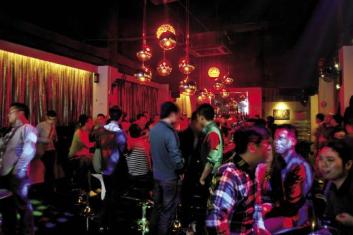 After receiving reports that a male go-go dancer was performing a “pornographic” show at the recently opened Shanghai Q Bar on Saturday, police raided the bar and took between 60 and 70 people into custody, including patrons and staff members.

From the New York Times:

“The raid, which coincides with one of the most concerted government crackdowns on dissent in a decade, sent a chill through China’s burgeoning gay community, which in recent years has grown self-confident despite intermittent harassment from the authorities. Gay activists say they cannot recall an incident in which so many people were taken into custody in one fell swoop.”

The detainees were then held for, in most cases, over 12 hours. Several have since complained about being denied food or water and being treated roughly. A first-hand report on Shanghaiist says that one detainee was questioned as a witness and was held longer after refusing to agree with a policeman’s version of what happened:

“He told me, you know, we’ve invited you here to be a witness. This is not against you. You need to cooperate with us. Once you’re done cooperating, you can go home and rest, and won’t have to stay here any longer. Later, he asked me about the details of the two dance performances — was [the dancer] wearing a transparent brief, was anyone inserting money into his underwear, etc. This went on for a while, and then he began typing. […] When the computer printout finally came, it was just as I expected. The details related to the second dance performance were not what I said at all. […] I said, I’m unable to sign this. Then the policeman told me to go back to the room and continue waiting.”

Unlike the most famous bar raid ever, Stonewall 40 years ago, Q-Bar isn’t an underground affair — not that it legitimately matters, as fancyness isn’t a factor for potential criminal activity (often quite the opposite) — but interesting nonetheless. Q-Bar is an upmarket lounge in a “revitalized waterfront district” owned by gay & lesbian scene veterans “Tony and Tony.” They have go-go dancers and sexy posters as well as martini nights and a “well-selected” wine list.

The Shanghai City Weekend reported that although the “wildly popular” gay club “Deep” closed recently due to “trouble with authorities” —  “homos running around premier property areas was frowned upon by the powers that be” — the paper describes Q-Bar as a departure from the controversy surrounding other establishments:

“Securing the licenses took a bit more than two months, but this is quite normal,” says Tony. “The gay scene is no longer underground, the market is bigger and people have more money to spend. They deserve something better — a better environment, better drinks and quality service. We are dedicated to providing all of these.”

So what’s going on here?

China decriminalized homosexuality in 1997 and removed it from a list of mental disorders in 2001, but is still really far from accepting it. There are markets in which lesbians and gay men hook up in convenience marriages because family is an expected part of life and, in the words of one attendee, “In my view, a 30-year-old man should start thinking about having a family, but two men can’t hold each other’s hands in the street. We’re not allowed to be a family.” Gay marriage is so far away from the table that it’s not even in the same building (while it was discussed when other marriage laws were re-evaluated in 2003, it is currently still illegal). 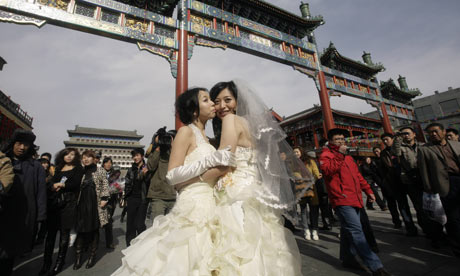 some Chinese are campaigning for same-sex marriage

In 2003, the first undergraduate gay studies course was added to the curriculum at Fudan University in Shanghai and in 2007, a China chapter of PFLAG was founded. Shanghai’s first pride festival was held in 2009, though it was very subdued and some events were cancelled by authorities at the last minute. The organizers were also warned by their lawyers not to hold a parade, because of the possibility it would be seen as a protest. From a 2009 article in The Economist:

“Life for China’s tens of millions of homosexuals has improved markedly since [homosexuality was decriminalized], especially in big cities. Gay and lesbian bars, clubs, support groups and websites abound. Chinese gays, who playfully call themselves “comrades”, have plenty of scope for networking. One surprising website caters specifically for gays in China’s army and police force.”

However. What about that thing that happened last year when that guy saw two lesbians kissing in “boyish fashions” and did not throw up in his mouth a little bit? Yes, back in September, a man wrote a letter to the New York Times about how he saw two girls kissing “romantically” on the subway in Shanghai and went on to observe that “contemporary China is the scene of the most rapid, transformative change of any large country in the world today,” where “sexual choice and expression” is changing in ways “far more dramatic than even the physical landscape.”

Huh. As we reported in September, the US China-Today’s article on Homosexuality in China painted a less voyeuristic and more hopeful perspective on rapidly changing attitudes towards homosexuality in Hong Kong and, even more recently, in mainland China. This rapid change in China is attributed to a “lack of religion,” an influx of expatriates, higher education and the homo-friendly One Child rule and cites barriers to change including a strict expectation of heterosexual marriage as the expected life course, a lack of representation on television and in newspapers (censored by Chinese media) and a gigantic generation gap with many older people still believing homosexuality is an illness.

But China has its own Manhunt, so there’s that. A Shanghai City Weekend article from last year declared: “Although being open about one’s sexual orientation at work is a big deal for many gay people, being gay is no longer such a social taboo in Shanghai” and that many gay citizens were even able to be out at work. 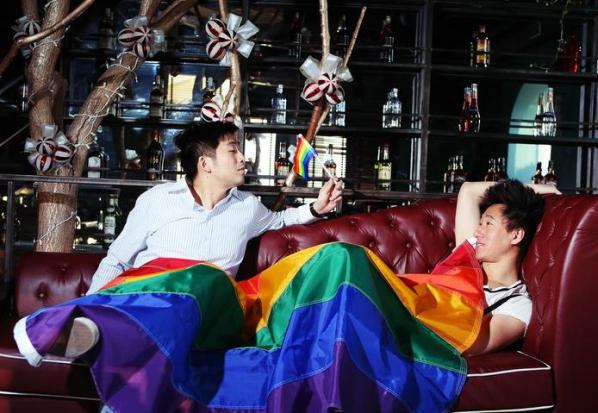 Wikipedia says that “many cases show that those participating in gay activity are still punished by the justice system and pursued by the police, and may be detained and arrested.”

Steven Bao, a bar DJ, said he believes the raid happened after other competing clubs complained, in an attempt to intimidate Q Bar — if that’s true  hope the competing clubs feel really guilty for what they started. The police had no comment on their rationale but the police report states that several people were living in a makeshift shelter on the roof of the bar, and that they “often saw naked men on the roof, drinking beer, chatting loudly, even having sex.” There’s so many things wrong with that being used as evidence to arrest 60 men in a bar that I don’t even know where to begin.

So far no one has been charged although several detainees report being asked specifically about the go-go dancer. The go-go dancer and Bao the Bar Owner are still in custody.

Is this a double-standard where two girls kissing on the subway is acceptable but gay men are targets of police action? Are they just easier targets because gay men actually get up, get dressed and go out to socialize with other humans whereas most lesbians apparently prefer to cuddle on the couch? Is it a reflection of the unease conservative cultures feel about effeminate men? Is it just as bad for lesbians? Is it like the opposite of the Philippines? Or is this just part of the crackdown on dissent and if so, how is this gay bar related to dissent? Is Autostraddle blocked by the Great Firewall of China? The answers to these questions and more — in the comments.