According to the world, most of the formspring answers on Autostraddle’s tumblr, and that book that’s coming out, it gets better. After all, people grow up! People learn! PEOPLE BECOME BETTER! GIVE THEM TIME! But it turns out adults are also sometimes shitty people, and so I’d like to present three tales of terror from the crypt of “Dude, you’re like, a grown man. Are you serious?”

This edition of adults saying dumb things about gay people starts with Blake Shelton and Jake Gyllenhaal. Shelton is the person who said the dumb thing. Do you even know who that is? He was the co-host of the Academy of Country Music Awards this Sunday with Reba McEntire, and can you believe he made a gay joke about Gyllenhaal in order to talk about Taylor Swift? God, this is low.

Hey Blake, looks like YOU coulda been in Brokeback! Hardy-har, see, it's awkward.

Here’s an outtake of his conversation with McEntire:

“Don’t make jokes about Taylor Swift,” McEntire warned. “If you make her mad, she’ll write a song about you. She writes songs about guys who break up with her.”

“Which I don’t understand in the first place. She’s beautiful, she’s talented, she’s sweet. What in the world was Jake Gyllenhaal thinking anyway?

Shelton’s retort: “Wait a minute, he was in ‘Brokeback Mountain.'” The country-music crowd laughed and cheered wildly at the joke, a reference to Gyllenhaal’s Oscar-nominated performance as a gay cowboy opposite Heath Ledger.

Um, awkward. First of all, because Gyllenhaal is an actor. Second of all, because calling out someone who isn’t in the room and is more famous than you for being “kind of a homo” is awkward and only makes me feel bad for the Country Music Awards. How long ago was Brokeback Mountain, anyway?

Moving on, the next and last two dumb things adults said about gay people came from our favorite people, the members of the Republican Party. One came from an actual member, and then another came from a young up-and-coming dude who ran the Texas College Republicans and stuff. But let’s start with the actual member.

Dan Gordon, a Republican State Representative in Rhode Island, spoke out against Gay-Straight Alliances, or at least the one at Tiverton High School, on his blog:

“I don’t think we should be promoting anything whatsoever that has to do with sexuality….Especially in a school that receives public funding. I don’t think there would be much of a problem with bullying if students weren’t flaunting their sexuality in school.” 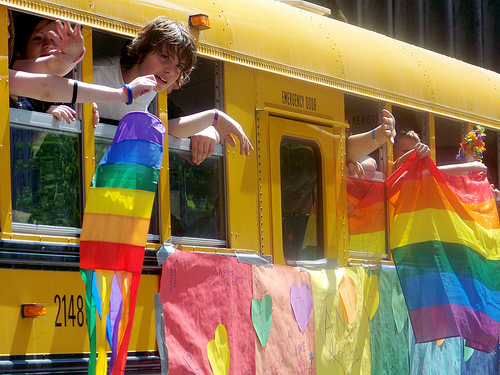 Check out this busload of GAY SEX. (photo via Jon Gilbert Leavitt on flickr)

But more importantly, he threatened them about it. Tiverton’s funding, according to Representative Gordon, will be pulled from Charter School Funding if they actually think of ALLOWING SUCH A THING TO GO ON THERE. After all, Gay-Straight Alliance sounds a lot like “Flaunt Being Gay Club,” or “Gay Sex.” (Gordon apparently also cited the GSA’s purpose as being for getting “sexed up.” Where was this in my high school?!)

“Comments like those made by Mr. Gordon are the reason our gay, lesbian, bisexual, and transgender teens suffer bullying and mis-treatment in schools. Comments like these show a complete lack of understanding regarding romantic orientation. Comments like these slander and wholly mis-characterize the important social justice role that Gay/Straight Alliances fill in high schools and middle schools across our nation. Finally, comments like these demonstrate an alarming ignorance of constitutional law from an individual who swore to uphold the rights of all his constituents.”

Like I said, gotta love mom. The petition demanded Gordon apologize not only to Tiverton’s GSA, but to GSAs across the country that are now filled with people with feelings about him. But Gordon hasn’t; he is too busy insisting he is not homophobic.

Meanwhile Charlie McCaslin, a junior Southern Methodist University, recently resigned from his post as Chairman of the Texas College Republicans after using an anti-gay slur to describe another candidate for the same position. (The consolation is that I think McCaslin might have been drunk and/or from a different world when it happened.) You tell me if you agree:

“Let me just tell you, character counts. That’s why I have a gut instinct this is the right man for the job,” McCaslin says pointing to Schriver.

“You know, the other team are nerds, are fags,” he says to thunderous applause and whistles during an after hours at the Texas College Republicans convention held last weekend in Austin.

McCaslin’s toast was capture with a telephone video camera and uploaded to YouTube by InnovateCRNC, the committee supporting Snyder’s candidacy.

This doesn’t feel real, right? Well, no matter what the cause, McCaslin resigned after the video went viral. Turns out it does get better – with the help of the internet, of course. Here’s a dramatized YouTube video of it:

So look, yes – it does get better. Because even though people say the darndest things and these weren’t funny, I would venture to say that the majority of adults also felt awkward about these stories, too. This is the end of this edition of adults saying dumb things about gay people. I hope you didn’t know any of them, and I hope there is never another edition, really.