The last college basketball game of the year has been played! March Madness is over and I can’t feel my face. In last night’s final, Texas A&M beat Notre Dame 76-70. It wasn’t always pretty, but it was so very entertaining. Lots of pointing in the air. 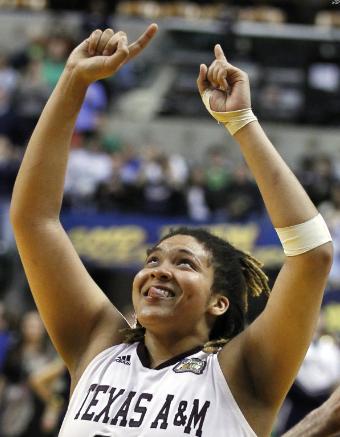 A lot of people have praised last night’s championship game for being everything the men’s championship was not: exciting, close, experiencing sudden changes in momentum, actually resembling a game of basketball and not a bunch of little kids trying to throw rocks on a roof. People think by acknowledging this one game it makes them superior. That by giving the Women’s NCAA Championship game the respect it deserves they are all of a sudden a fierce advocate of women’s athletics. It pisses me off. The women’s tournament this year was enthralling on its own two feet. No comparison necessary. The team, the players, the stories, the emotion — it was all real. It’s sad that it took Butler’s men’s basketball team to show the world how fun the women’s game can be.

On to the game: The first ten minutes were a big pile of WTF. Both teams looked like they were really feeling the pressure of what it meant to be on that stage. I imagine those feelings are only intensified when virtually no one but you and your momma expected you to be there. Notre Dame got way more than a taste of the defense Texas A&M is known for resulting in seven turnovers in the first six and a half minutes. Midway into the half, the Irish turned it around. Someone finally heard me through the TV screen because they started getting the ball into the post. Devereaux Peters came alive and had 10 points by the close of the half. She finished with 21 points and 11 rebounds.

At the start of the second half, we finally got the guard match-up we were looking forward to. Sydney Colson (10 points, 5 assists) was back in after picking up three fouls in the first half and Skylar Diggings (23 points, 4 steals) found her touch around the basket. They were all over each other. I think Colson may have gotten to first base. 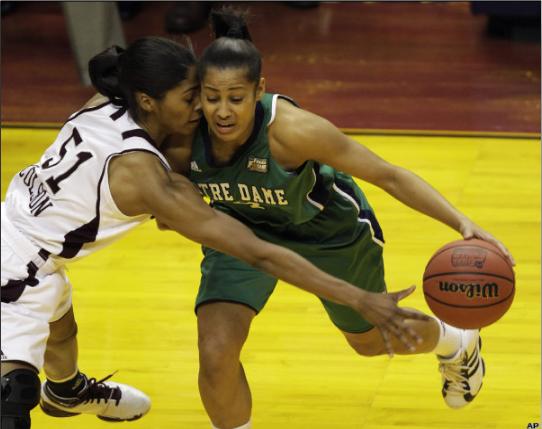 Danielle Adams remembered she was an All-American (it’s easy to forget these things) and went off. She scored 22 points in the second half to finish with 30. Adams turned in a great second half performance, but the game might have taken a very different turn if it weren’t for the heroics of Tyra White. You might recall that White hit the game winner vs. Stanford. With two seconds on the shot clock and 1:07 left in the game, she hit a 3 pointer to extend the lead to 73-68. She finished with 18 points. Eighteen extremely important points that got overshadowed by Adams’ second half burst.

The Aggies’ coach Gary Blair, possibly the most adorable old guy of all time, became the oldest women’s coach to win it all at 65. This was also the first win in school history. Blair said, “We might not play the prettiest game in the world but it’s good for women’s basketball to see a Texas A&M and a Notre Dame in this game.” Do you agree? Are you tired of seeing the same teams in the championship every year? 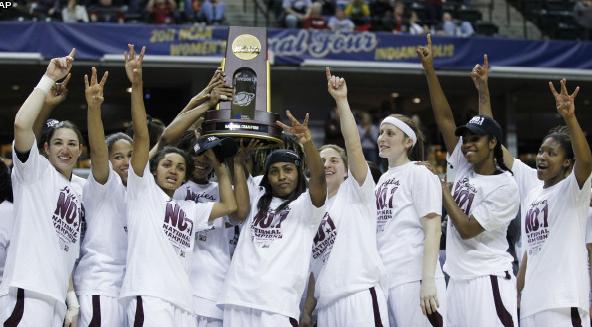