Robin Denson loved 11-year-old Kyra Inglett, the daughter of her girlfriend Kaladaa Crowell, like her own. That’s why she was stood up at a press conference on January 1st to beg her son, 26-year-old Marlin Larice Joseph, to turn himself in to police for their murder. 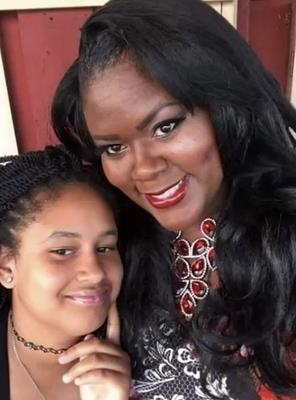 Kaladaa and Kyra via legacy.com

“Marlin, son, I love you,” she said at the December 30th press conference in West Palm Beach, Florida, where the murders occurred. “You know I love you, but please, turn yourself in. If you’re scared to do so, call me.” She added, “I want justice for my girlfriend and her daughter. He’s my son and I love him, but I also loved them too.”

Denson was outside when the shooting took place, reportedly stemming from an altercation during which he decided Kyra had a “bad attitude.” Police stopped Denson from going into detail about the event at the press conference.

Denson said Joseph was a good kid who’d played high school football and read the Bible every day, and she’d let him move back in with her ten months ago after he’d spent less than a year in prison for battery on a child, charges stemming from an accusation of lewd behavior toward a 13-year-old girl when he was 22. “I just don’t know what went wrong,” she said.

Denson described her girlfriend as “the sweetest person” who would “give the shirt off her back to help anybody.” Denson didn’t know Crowell’s parents, who she said did not approve of their relationship: “They’re from a Christian family and I respect that ‘cause I was raised in a Christian family. They just didn’t really like that me and her were together and I respect that.”

According to The Palm Beach Post, Crowell was a caseworker at the Jerome Gorden Center for Behavioral Health beloved by friends and co-workers. Her boss said she “always went above and beyond.”  At a vigil for the women in the last week of December, a friend described Kaladaa as “a hard-working young lady who had a beautiful daughter.” She was a “second Mom” to her clients, and would take clients to get free haircuts, loved decorating for holidays and spoiling her daughter.

Kyra was known for her “spunky” personality and artistic talent.  According to her sister, Kaarmel, Kaladaa had been saving up to send Kyra on a school trip to Washington DC as part of the safety patrol. Kyra was planning to apply to an arts middle school to explore her interests in singing, dancing and visual art. Kaarmel said Kyra was a “mama’s girl” who “thought she had to be her mom’s protector” and would “try to boss you around even though you were an adult.”

Marlin Joseph did not turn himself in. On January 2nd, U.S. Marshalls tracked Marlin Joseph down at an apartment complex on Federal Highway in Lake Worth and took him into custody. His cousin, 27-year-old Javarie Williams, who let Joseph stay in his apartment for four days after the murder and was found by police using Joseph’s credit card to get money for Joseph, is being charged for making a false report for lying to police during a capital felony case.

There has been no reporting on the gun involved in the killing.

A vigil was held outside the home on December 30th.

Kaladaa Crowell is the fourth black lesbian (that we know of) murdered during the last week of December, 2017. On December 28th we first heard of the brutal quadruple murder of Brandi Mells (22) and Shanta Myers (36) and Myers’ two children, Jeremiah (11) and Shanise (5), which happened December 21st in Troy, New York, with bodies discovered on December 26th. On December 28th, Kerrice Lewis (23) was shot and burned alive in Washington DC. I read about Kaladaa and Kyra yesterday while doing research for the piece on Kerrice Lewis.

May Kaladaa and Kyra both rest in power.

Vigil for Kaladaa Crowell,36, and Kyra Inglett,11, who died after being shot to death on Thursday night. Police say it was an act of domestic violence. pic.twitter.com/X7ndbhGVXz