On December 28th, residents of the 800 block of Adrian Place SE in Washington DC called police after hearing multiple gunshots, and officers arrived around 7:20 PM to find a Lexus on fire, and a woman’s body inside it. Some residents now say they could hear the victim, 23-year-old black butch lesbian Kerrice Lewis, screaming from the trunk, where she’d been stuffed before the car was set on fire. She was unconscious, suffering from multiple gunshot wounds, and by the time medics arrived, she was gone. 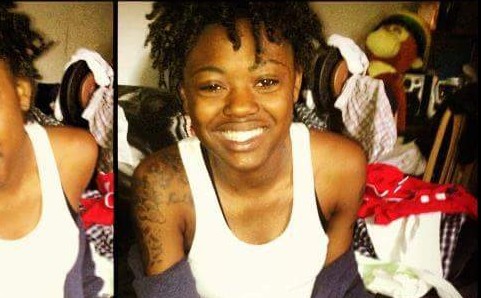 Lewis’s grandfather, William Sharp, raised Lewis from when she was around 11 years old, after her mother died of a brain aneurysm. Her father was tragically murdered in Washington DC a year later. “Anytime you lose a family member, especially like this, it just rips your heart out,” Sharp told Fox 5.

Sharp described Lewis as a “free spirit” who was “full of life” and that she would “light up a room, just talking and laughing.” Lewis had understandably struggled as a teenager after the deaths of both of her parents, and her grandfather said she’d spent time in jail, but had been doing well lately and doing construction work. Her grandfather said she “was very excited because she had just finished taking some classes and was looking forward to taking some more.”

Her ex-girlfriend and best friend, Mercedes Rouhlac, still talked to Lewis every day, and said, “No matter what, she still loved me and my son.”

Lewis was murdered just a week after a brutal quadruple homicide in upstate New York took the lives of a family that included a 5-year-old girl, and 11-year old boy, their 36-year-old mother and her 22-year old girlfriend who, like Lewis, was masculine-of-center. An arrest was made in that case a few days later.

A few hours before Lewis was murdered, her childhood friend, 27-year-old Armani Niko Coles, was shot and then pushed out of a car, eventually dying, just two miles from where Lewis was killed. He had an eight-year-old son.

Blavity wrote: “Many Twitter users have speculated that there has been foul play that connects both murders. Lewis’ sexuality was also rarely mentioned in reports leading others to believe that Lewis’ story has been pushed aside because of bias toward butch lesbian women and has not received the proper attention it deserves.”

There are no reported suspects in Lewis’s case as of yet, but there’s speculation that Lewis and Coles’ death could be related to another murder on December 28th. 23-year-old Ronzay Green, who was shot and killed outside a 7-11, was also apparently a friend of Lewis’s and Cole’s. 23-year-old Dennis Whitaker, a rapper known as “Jugga Knott,” has been arrested for that murder. A witness recognized Whittaker from his picture on Instagram and Whittaker apparently called police to surrender. He has not been officially linked to the other murders.

Police are offering a reward of up to $25,000 for any information about the murder.