After Sochi was announced as the location of the 2014 Olympics, acclaimed photographer Rob Hornstra and award-winning journalist Arnold van Bruggen decided to collaborate on a “slow journalism” project that would tell the story of Sochi and the surrounding region. “Never before have the Olympic Games been held in a region that contrasts more strongly with the glamour of the Games than Sochi,” van Bruggen wrote. “Just twenty kilometers away is the conflict zone Abkhazia. To the east, the Caucasus Mountains stretch into obscure and impoverished breakaway republics such as North Ossetia and Chechnya. On the coast, old Soviet-era sanatoria stand shoulder to shoulder with the most expensive hotels and clubs of the Russian Riviera. By 2014 the area around Sochi will have been changed beyond recognition.”

Beginning in 2009, van Bruggen and Honstra began performing extensive research in the area, returning again and again to develop a sustained and thorough engagement with the subject of their story. The result was The Sochi Project. The Sochi Project is a website, a book and an exhibition, funded by grants and by more than 650 private donators and described as “a contemporary masterpiece of photography and journalism in the collaborative tradition of James Agee and Walker Evans, Dorothea Lange and Paul Taylor.” 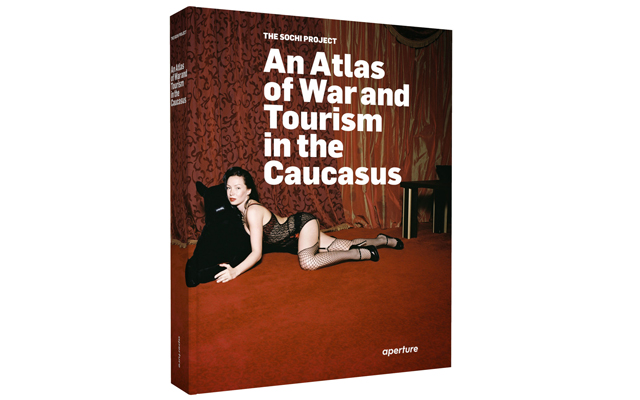 The media-rich website dynamically features Hornstra’s photography, which “combines the best of documentary storytelling with contemporary portraiture, found photographs, and other [collected] visual elements” and Van Bruggen’s words, “a series of engaging stories about the people, the land, and its turbulent history.”

I began reading The Sochi Project thinking it was just another really well-presented piece of longform journalism that I’d include in my weekly longform roundup, “Things I Read That I Love.” An hour later, when I’d just completed Part One — about Sochi as “the Florida of Russia, but cheaper,” famous for its “subtropical vegetation, hotels and sanatoria” and a popular summer vacation spot — I realized this was more than just another piece of longform journalism. Part One concluded with links to two digital books containing more photography and writing about two topics explored in the section: Sochi’s Sanitoriums and the singers who perform at every “self-respecting restaurant” during the busy season on Sochi’s promenade. There are digital books at the end of every section, but every section is its own multimedia presentation, too. What I’m telling you is that there is SO MUCH INFORMATION ON THIS WEBSITE. And honestly, this is the kind of stuff a lot of us just honestly don’t know, you know? And it’s always best to know as many things as possible.

If you’ve been following the (often problematic) accounts of Western journalists’ reactions to the conditions in Sochi, you’ll be intrigued, as I was, to read about the differences in Soviet and Western tourist culture and a town where, as Hornstra told Dazed Digital, “a lot of citizens… really weren’t all that interested in the Winter Games.”  The website breaks the story into eight parts — The Summer Capital (about Sochi’s history as a resort town), A Paradise Lost (about Abkhazia, a small country about three miles from the Olympics which was ruined by a bloody civil war between Georgians and Abkhazians starting in 1993), On the Other Side of the Mountains (about North Caucasus, “the poorest and most violent region of Russia” located about 65 miles from Sochi), Always Troubled (about ongoing conflicts in the North Caucasus region making it “the worst nightmare of the Sochi 2014 organizers”), Building the Winter Capital (about the grueling and exploitative process of building the Games facilities and displacing its native residents), The Abkhazian Olympic Dream (about the broken dream of the Olympics ending Abkhazia’s isolation by bringing tourists and international recognition as a country), Injustice Breeds Unrest (about the pre-games attempts to prevent terrorism by committing massive Human rights violations in North Caucasus) and the final chapter, “Putin’s Private Project,” about fissures in the final months before the Olympic Games. 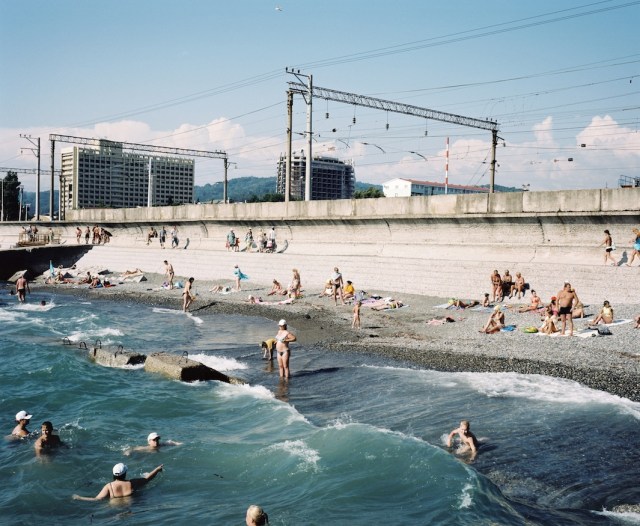 The Railway line passes by a pebble beach popular with Russian tourists. (Rob Hornstra/Flatland Gallery. All images from The Sochi Project: An Atlas of War and Tourism in the Caucasus (Aperture, 2013).)

The Project has been covered extensively in the International press, especially in Russia, The UK and The Netherlands, and has recently begun garnering massive attention stateside. Hornstra and Van Bruggen have been doing radio appearances and giving lectures all over the world, and the exhibition can be viewed now at museums worldwide including FotoMuseum (Antwerp, BE), The DePaul Art Museum (Chicago), Photo Ireland (Dublin, IE), Aperture Gallery (New York), Fotohof (Salzburg, AT), Noorderlicht FotoGalerie (Gronigen, NL) and the Scotiabank CONTACT Photography Festival in Toronto, Canada. An exhibition in Moscow, set to debut last October, was called off when Rob Hornstra became the first Dutch journalist to have his press visa and accreditation rejected by Russia in the post-Soviet Union era.

I still haven’t finished reading the entire thing yet, but I will. These stories, collected from the human beings who actually live in Sochi, are the missing piece to the slap-shot narrative about the region being presently peddled in the mainstream press. “We don’t have anything against these games, but we hope if you watch them that you know in general where it’s taking place,” Hornstra told Slate. “If you look a little bit farther than the stadium, you’ll see different things. I think it’s important for people to know what’s going on over there, that it is part of this facade, the Putin show.”