I don’t watch very much TV, and I REALLY don’t watch much reality TV. Hoarders is a stretch for me. (Except for Extreme Couponing, DUH.) But recently a friend started watching Circus, which is conveniently streaming on Netflix, and felt very strongly that I needed to also. I resisted for a while, but eventually I had something important to do that I urgently needed to put off, so I put it on. And you guys!

You guys this show is so great. It follows the Big Apple Circus over the course of an entire season, from the first weeks of training and designing the show to the final goodbyes. I am now obsessed with everyone on this show. I care about them more than some members of my own family. I remember seeing Grandma the clown when the Big Apple came through my city when I was a kid, and now I am deeply devoted to Barry Lubin, the performer who plays her. As will you be! And oh God that’s not even getting into Mark Gindick, who I think I actually want to adopt. 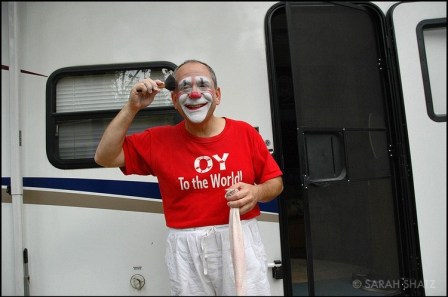 It’s not an explicitly gay show. I mean, there is no Naomily in Circus. But I don’t know, maybe it’s me, but I think there’s some definite gay potential. For instance, can we talk about the wire performer Sarah Schwarz, whose arms are so amazing I want to be in a relationship with them all on their own. Can someone’s arms be gay? Can being gay somehow get me arms like this? I mean seriously, Michelle Obama has nothing on this.

And then there’s Kwame and Heidi. I don’t want to give too much away, but seriously, moving across the country to live with a girl who does all her shopping at Hot Topic before she’s even legally separated from her crazy ex? All while wearing a hoodie? On a scale of 1 to gay, that’s pretty fucking gay.

Have you seen Circus? Have you seen the actual real circus? Can you juggle? Should I watch Circus Rosaire like Netflix is telling me to? Please discuss.