Let’s talk grains. I used to almost 100% subsist on refined grains; pasta and bread specifically. I also had horrible stomach aches all the time and assumed that was just a part of life that everyone got used to. Then I discovered vegetables and, holy guacamole, did that make all the difference. It took me a while to get going, but once I started eating real food I was unstoppable. Recently, my quest for delicious things that also make my body feel good brought me back to me beloved grains. Only now, I’m eating the real stuff: wheat berries, quinoa, barley, yum.

If you’re a celiac or paleo eater, grains probably not your friends. To that I say: you do you! We all eat what we like and what our body likes and it’s a pretty awesome thing that we have so many options. (I also say: Don’t ignore this recipe just because I’m spending the whole intro talking about grains, there are plenty of recipes for paleo and gluten-free tabbouleh out there!)

But for those of us who do eat them, let’s all take a second to learn how to do them justice. Here’s a handy infographic from Good Eggs that shows you exactly how much water goes with each grain. 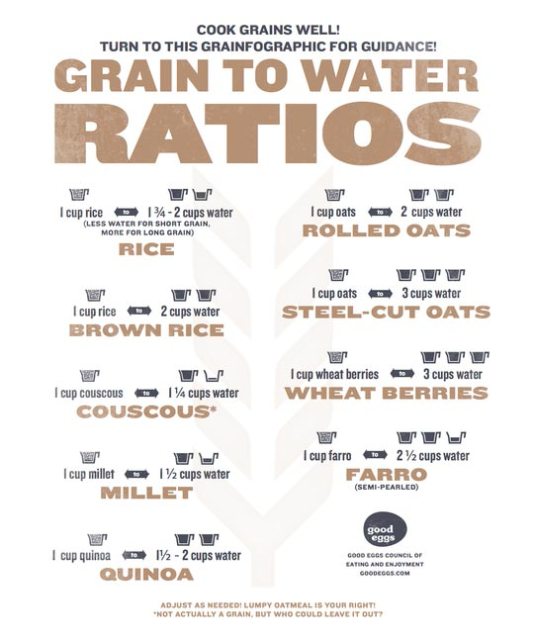 I’ve you’ve never had or made tabbouleh before and need an idea about what kind of proportions you’re aiming for, take a look at this recipe that I got from my friend’s mom. With that in mind, let’s get started! 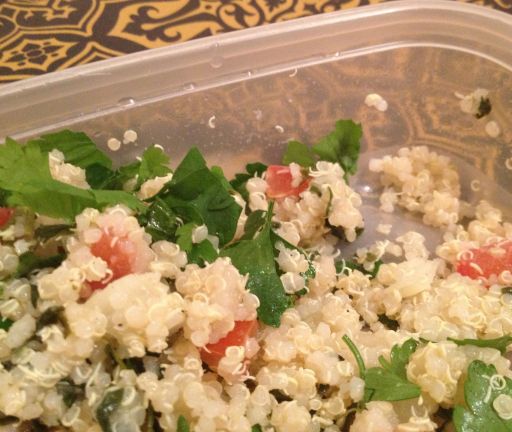 Ingredients that I used this week are starred(*).

Instructions:
1. Prepare your grain accordingly. If it needs to be cooked, allow it to cool before adding anything.

2. Chop your greens. You can do this by hand, but you’ll be so much happier if you just use a food processor.

3. Chop (or food-processorize (or whatever you call it)) your vegetables and other add-ins into small pieces.

4. Add the dressing and spices. You most definitely need olive oil, but the rest is up to you.

+Storage and eating: Keep your tabbouleh covered in the fridge and it’ll keep for a while. Actually, I once went on a road trip and took a giant bowl of tabbouleh with me from Ohio to Connecticut to the Bronx to Brooklyn to Philadelphia and back to New York. Basically what I’m saying is: there isn’t any dairy or egg nonsense in this that will cause it to spoil easily.