Riese has worked her mathematical magic and calculated our TV Team’s choices for The Best TV Shows of 2022 With LGBTQ Women and Non-Binary Characters! Carmen is here to tell you why the new Gossip Girl is finally worth watching. Sa’iyda chatted with Gen Q‘s Jordan Hull about the emancipation of Angie. Drew and Analyssa talked you through the latest episode of Gen Q in this week’s To L and Back. And how about a look back at the best queer episodes of Say Yes to the Dress. On the movie front, Shelli watched Looking For Her and shared 47 very precise thoughts about the experience.

+ Monet’s not in this week’s episode of Gossip Girl, which automatically makes it the worst episode of the season. However!! I want to give a shout out to Max/Aki/Audrey, who might be the healthiest throuple on television? What started off as a pretty biphobic trope (a gay kid at school convinces Audrey that Aki’s bisexuality might just be a pitstop on his way to becoming gay, which is not how any of this works) ends in a lot of honest communication between teens who talk like adults. I was really struck by it, and once again struck by how good this finally queer show is at doing queer things well. — Carmen

“I wanna do everything
What a beautiful feeling”

When we left our adventuring party, they were en route to the Immemorial City to rescue Kit’s brother Airk, and this episode picks up right there, except now they’re being chased by servants of the Crone. The only way to escape them is by heading into the Wildwood, of which there is much lore describing its perils; including the fact that the Bone Reavers who killed Jade’s parents fled into that very Wildwood.

It’s not long before they’re captured by Bone Reavers and we meet Scorpia (HEY GIRL!), their apparent leader. She separates our group, puts Elora and Kit in the same cell, and holds onto Jade “for sport.” While Elora and Kit plan an escape, Elora tells Kit that love is the most powerful force in the universe which is how she knows they’re going to successfully rescue Airk. But Kit can’t figure out why Elora is bringing up ~love~ when Jade’s life is at stake! Because history will obviously remember Kit and Jade as THE BEST OF FRIENDS!! Both Elora and I can barely keep our eyeballs in our heads, they roll back so far. Elora tells Kit what the rest of us can see – Jade loves her! Jade is on this quest because of her! And poor Jade loves someone who can’t seem to love her back.

Once they escape the cage, they demand that Jade be released, but our girl frees her ownself, steals a blade, and attacks Scorpia. The two fight until Scorpia sees a very familiar marking on the back of Jade’s neck. It turns out, Scorpia has the same mark because *dun dun dun* they’re sisters! Their father is General Kael, the very man who Madmartigan (Kit’s father) killed in the Battle of Nockmaar. Scorpia tells Jade that the younger sister was taken and lied to in order to prevent their people from rising up against Queen Sorsha. It’s not lost on Jade that the one thing she’s always wanted to be, a knight and a soldier, was predetermined for her by her captors.

Later, the Bone Reavers are celebrating Jade’s return home with a party complete with dancing and food and plums that force you to tell the truth once you eat them. Totally normal stuff. And for the first time since we met her, Jade looks happy and at peace. She and Kit keep stealing glances at each other, so they meet up and talk about why Sorsha lied about Jade’s past. Jade asks if Kit knew, which she didn’t, but Kit did suspect something was off and didn’t say anything lest it break Jade’s heart. Something that Jade says Kit is an expert on. OUCH!

So Kit asks Elora for advice and tries again. This time, she tells Jade that she needs her in every part of this life; that she’s all she cares about and if she allowed Kit to join her, she would live with the Bone Reavers too because there’s no adventure she wants to do with Jade by her side. And the look on Jade’s face when she realizes what Kit is saying?? WHEW! AND THEN Jade confesses that she has been deeply and ridiculously in love with Kit for a long time, so homegirl better get ready because once she kisses her (with consent), she might not stop. But before their lips touch, trolls attack and kidnap Kit, thus putting themselves at the very top of my Enemies List.

Special shout out to the music supervisor for this episode because “Crimson and Clover” playing in the background of PrincessKnight’s scenes?? Chef’s kiss. Y’all, I LOVE THEM. 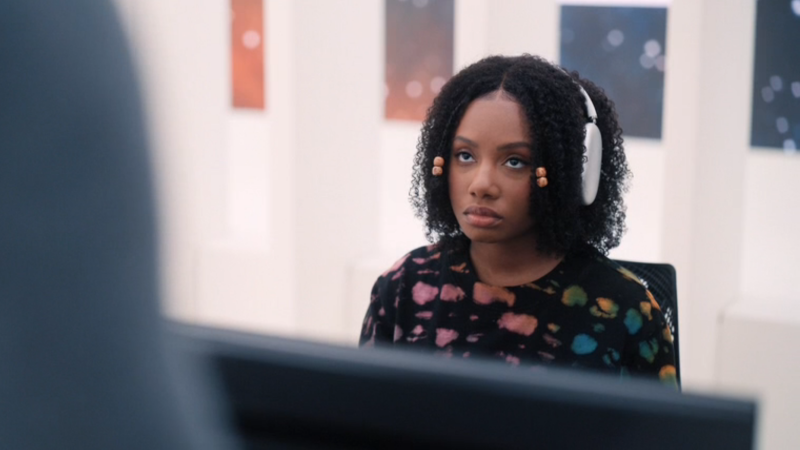 The way someone coming up to my desk could interrupt my flow was infuriating. This look is such a mood.

Poor Dana is really going through it this week at the GrimPop offices. Ian and Poppy are fighting about office politics; messiness, temperature, etc. They keep trying to get her to take sides but she doesn’t want any part of it. One thing I noticed during this is that Dana has a picture of Rachel on her desk, which is kind of adorable and extremely gay.

Dana tries to leave the office to finally get some work done but David ends up trying to drag her into his mouse drama, too.

And as someone who just quit her day job, I feel this so deeply. The higher up in a company someone is, the more detached they are from the people who actually do the work that makes the company run. They love to busy themselves with unimportant things like “check-in” meetings, unaware that some people have actual work to do! Also this is only somewhat related but back when I actually went into the office, it had an open office plan and they pumped white noise throughout to try to keep the noise from carrying but on days when my stress or anxiety was high, it sounded more like I was being waterboarded by television static. I do not miss working in an office!! 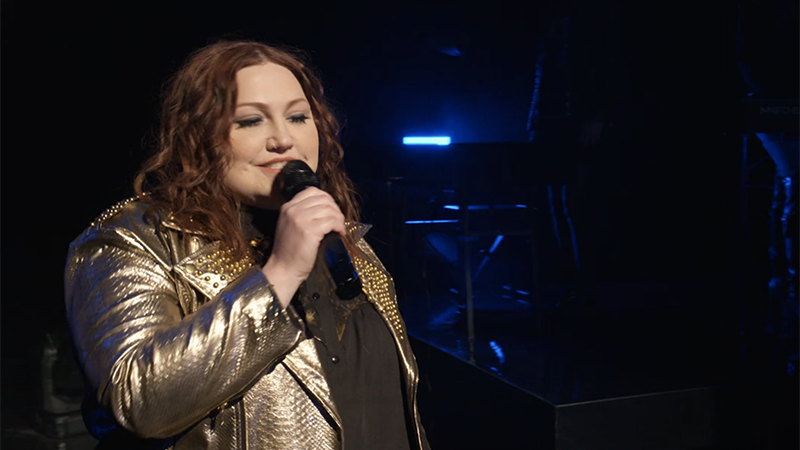 When Monarch landed on our radar, I told our TV Team, “I’ll watch Monarch until Fox cancels it before the midseason break and then burns off all the remaining eps one Friday night in December.” Which wasn’t exactly how it played out — but almost! What I couldn’t have guesssed was how this show would be worse than I even imagined (both in terms of writing and queer representation). And also how much I would LOVE IT. Lesbians deserve trash too!

The series ends exactly how you’d expect. GiGi finds out that Kayla cheated with Luke. Apparently there was like a several month delay in her getting pregnant and then faking IVF, which seems like something that definitely was going to come up sooner or later, and finally does when Kayla goes into labor. GiGi rushes to the hospital like, “But the baby’s only five months along” and the OBGYN is like, “Um, I’ll leave you two to talk.” And then both Luke and GiGi abandon Kayla in the hospital to go through labor all by herself.

To be fair, the Roman clan is VERY BUSY listening to Albie go on and on about how family is THE MOST IMPORTANT THING over and over while also explaining to his grandchildren how he killed their father. Luke tries to bond with Albie over the fact that they’re both cheaters with cheater babies, but Albie says it’s way worse to cheat with your sister’s wife and then try to pass of your cheat-baby as a benevolent gift. Luke slugs him in the nose for this observation. Albie’s planning to go to jail for murdering Clive, but at the last minute he has his daughter’s boyfriend, who stole Clive’s dead body already, dig it up a second time and bury it in the DA’s yard. When the DA comes to arrest Albie at his concert, it’s like that “Call the ambulance — BUT NOT FOR ME” meme. The DA is like, “You’re under arrest” and then Alibe’s like “No you’re under arrest” as a whole other set of cop cars pulls up. This all seems very correct, from a legal standpoint. No notes.

At the end of the day, Nikki books a world tour and invites GiGi to be her co-headliner. GiGi leaves behind her wife, her wife and brother’s new baby, and her own toddler. Nikki leaves behind her children with literally no adult supervision, due to the aforementioned ‘grandfather murdering their father’ thing. And those Roman cousins who’ve been fucking promise not to fall in love with anyone else while they’re apart.

I don’t think my attention span could have held on much longer, but I did enjoy this garbage while it lasted. I hope Beth Ditto releases a country album for real!