I think it’s best, right at the top, to be honest about one thing: The first season of Gossip Girl did not use Monet de Haan (played by bisexual actress Savannah Smith), teen socialite, Black lesbian extraordinaire, soon to be Head-Bitch-in-Charge, well. In fact barely used her at all, she spent the first half of the season as one of two sidekick henchmen for resident “it girl” Julien Calloway — the other sidekick, Luna La, played by trans actress Zión Moreno, is equally underserved — and then in the second half of the season, she was largely nowhere to be found.

In fact, I think it’s safe to say that the first season of Gossip Girl’s franchise reboot did not live up to its own promise from creator Josh Safron that it would be very gay. Yes, bad boy heartthrob Max Wolfe (Thomas Dohtery, we’ll call him new Chuck Bass) was pansexual with gay dads, and he turns his best friend Aki’s (Evan Mock, the human embodiment of “no thoughts, just vibes”) world inside out, leading to an eventual teen throuple with Aki and his forever girlfriend Audrey. And yes, Max did chase after dating his teacher — a trope I think we can all agree can be left in teen soaps past, even if swiveled on its gay head. But overall, for all the anticipation of over-the-top luxurious queer drama… the show fell flat. Being straight is one thing, but the new Gossip Girl was boring, and that is so much worse. It reached a point that Vulture (a website that built so much of its early fame on the original series, much like Autostraddle built ours on The L Word) was forced to bluntly ask, “WTF Happened?” 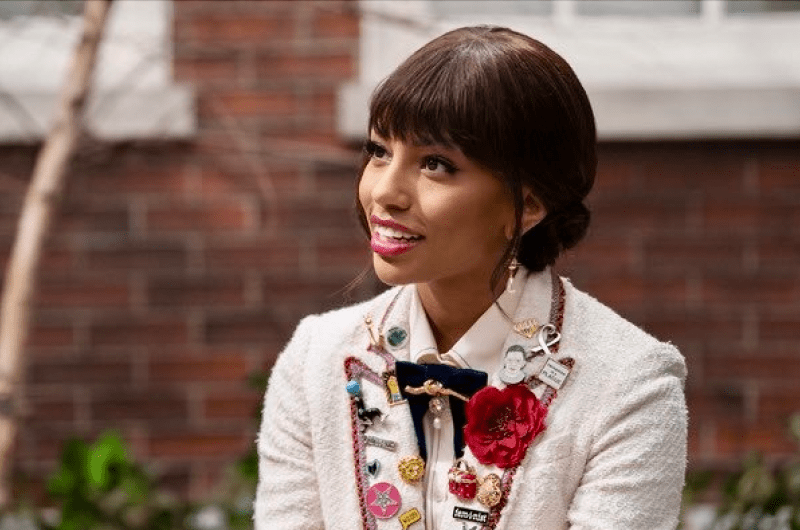 An ice queen, and we love her.

But in Season One’s finale, Monet de Haan returned back to the centerfold, with a promise to come for Julien’s crown. Season Two’s hierarchy of power immediately flipped in every juicy, delicious, detail that made the original Gossip Girl so great to begin with.

The biggest problem with the reboot’s first season was that Julien Calloway, the resident Queen of Constance, was so obsessed with being nice that she only ever was boring. Her little sister, Zoya (Whitney Peak), was originally intended to be the antagonist, but there’s only so many times you can watch half-sisters fight (for those who watched the original series, this year Zoya’s been moved into more of a Jenny Humphrey position, and its for the better). There’s other problems as well, including a central focus on the teachers that unfortunately the second season hasn’t been able to shake, but so much can be forgiven as long as the central credo is adhered: For every Serena van der Woodson, there must be a Blair Waldorf. 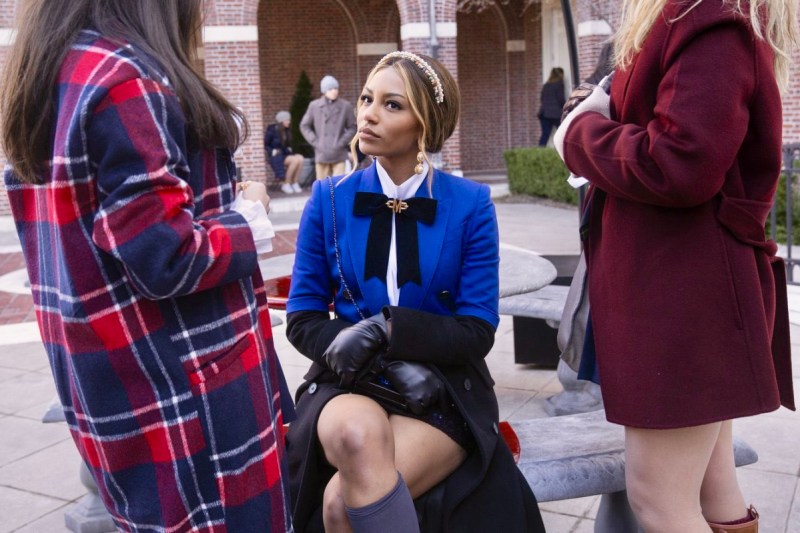 I wish I could tell you that I was clever in this analogy, but Monet outright says it herself in the Season Two two-part premiere, which aired earlier this month. Julien Calloway has never felt comfortable with the power that comes with her social influence as the head of those infamous MET steps. She’s much better suited as a Serena-type, self-centered in her immense privilege, walking through life as if it’s easy, because for her it is. Explaining away the pain of those that she hurts with the charm of a Disney Princess and a kilowatt smile to match. But a “Serena” cannot walk with the petals of daisies at her feet alone. Oh no. For every jewel and gem on her crown that Serena takes for granted, Blair claws at with her bare hands. Serena might have influence, but Blair? Blair has power. She earned it.

That’s what has made Savannah Smith’s work as Monet de Haan the must watch performance of soapy dramatic perfection this year. Rewriting Blair Waldorf as a Black lesbian who knows what it means to be sidelined, and who refuses to go back into the shadow? Rewriting Serena and Blair as two Black (absurdly rich) teenagers, who have vastly different understandings of wealth, race, gender, sexuality, and what it means to maintain power? (Because do understand this, the Julien/Serena types always want power just as much as the Monet’s and Blair’s, they just don’t like to dirty their hands and actually do the work.) It’s gold.

And Savannah Smith is eating it up with every bored eyeball, perfectly placed sneer, and pop culture-flecked insult. Whatever other faults in Gossip Girl’s second season, she is impossible to turn away from, and that’s made all the difference.

It’s not just that Monet de Haan is a mean girl lesbian teen (though praise be to Santana Lopez, we do love a mean girl lesbian teen). It’s that she’s one of the best written teen lesbians this year — bar none. She’s so over dramatic, it borders on campy, which is what made the original series work so well. For all of her raw knuckled ambition, it’s clear that her sexuality is still a place of vulnerability (the fact that she’s best friends with Luna, a Black lesbian and Latina trans girl in a school awash in white straight privilege, who shared a beautiful moment about loneliness together in last week’s episode, is not lost on me). When she has to pick between an easy power grab and selling out a teen from a different school who was merely pretending to be gay for pay/popularity, she picks the latter. Her own mother, Camille de Haan (Amanda Warren), clearly has a intense love/hate jealousy relationship with the openness that her daughter’s privilege has afforded, while working through closeted baggage of her own. Black mothers and daughters don’t get to have these kinds of conversations, and both actresses are performing them to the hilt, even in a Dynasty-esque background.

After a very rocky start (you would be forgiven if you gave up on the show, but now is the time to come home) — there are two things that Gossip Girl has gotten right in its second season. One was hiring Hunter Harris as a writer on the show (any pop culture writer on the internet will tell you — Hunter can write her ass off. And it shows here). The second was putting Monet de Haan in the middle of the stage.

In last week’s episode, some nameless teen gay boy bowed at her feet before class in the Constance courtyard and called her “Queen.” She — and all of us — deserves.