Welcome to the sixth recap of the third season of The L Word: Generation Q, brought to you by the same network that aired the original L Word, a show about an aspiring screenwriter who Irish Goodbyed a beach party by boarding an inflatable raft with her Pomeranian and floating out to sea, only to resurface many months later with a film financier she met in Tulum and a really cute attitude.

Thank you for gathering here as a chosen family during the thick of the holiday season to read this L Word Generation Q Episode 306 “Questions for the Universe” recap. It seems that last week’s announcement of an upcoming musical episode was more exciting to me than it was to the internet-at-large, who commented things like “nobody wants this” on Showtime’s instagram while I sat here thinking, “but wait, I do!” See, one thing I learned from enduring the entirety of and recapping a solid portion of a little TV show called Glee is that singing and dancing is almost always fun and talking is only sometimes fun. So what are we waiting for? Let’s take a trip!

We open in what appears to be a mini-orgy, which is — although not quite as satisfying as Jim playing a prank on Dwight — generally a fantastic way to start an episode of television. 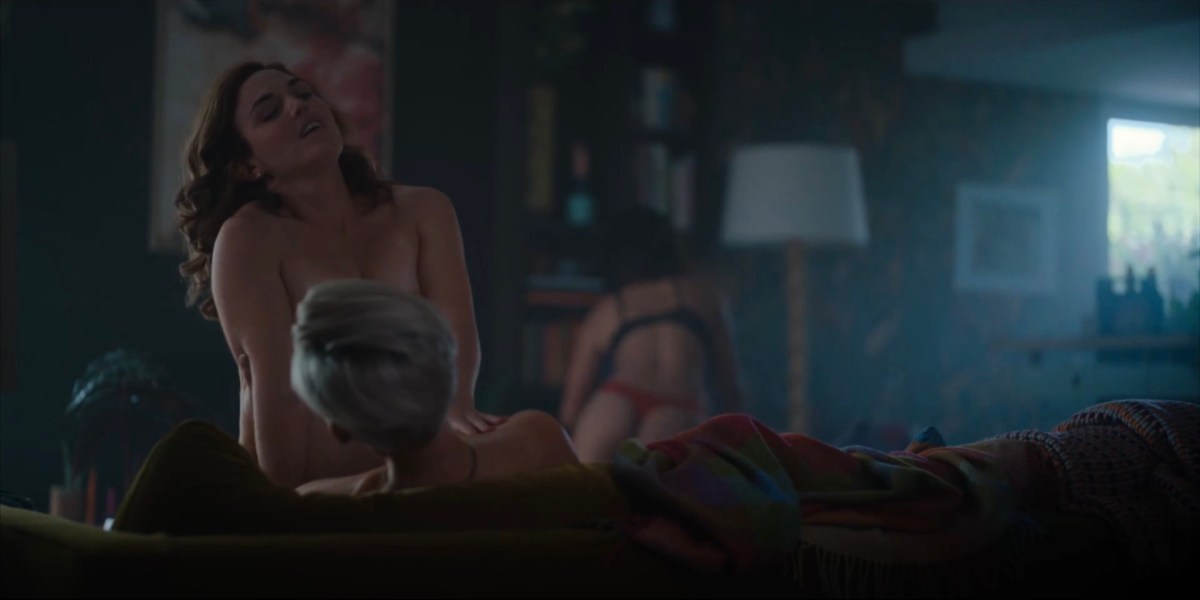 Lesbian Sexy Moment #5: Bacchanal Buffet
The Players: Shane and several unidentified extras
The Pick-Up: No idea but I’m dying to know — assuming Shane’s been avoiding the Dana Fairbanks Memorial Tavern and has never downloaded a dating app, did she simply approach these lesbians at the Silver Lake Whole Foods and ask if they had plans for their cucumbers?

Speaking of Shane, she’s not really participating in this sex scene. Rather, she’s gazing lazily at a resplendent display of entirely-to-partially undressed women engaging in sexual intercourse of various flavors while drinking alcohol straight out of the bottle.

We cut to the outdoors, where Alice is wearing an adorable adidas x Gucci tracksuit that is no longer in stock but is available at several resale establishments for approximately three thousand dollars. She’s carrying multiple shopping bags and talking to Sophie via telephone about this weekend’s Aloce Show Staff Retreat, which apparently involves drugs.

And then, Alice enters the domicile.

Shane stands right up and immediately apologizes. Alice notes that this is a lot of naked people on her bisexual velvet couch.

Over at FiSoMiMar’s, Sophie’s packing for her trip in her bedroom and Finley is in a different room, having found herself a great car on Carmax, where Car Buying is Reimagined! Despite being in a committed serious relationship involving cohabitation and daily communication, we’re supposed to believe that Finley’s completely unaware that Sophie’s going on an overnight work retreat this weekend until Finley enters the room where Sophie is packing. I will be subpoenaing records of all communications between Sophie and Finley from the 3-4 days preceding this moment as I simply cannot fathom how this has taken place.

Do you think these are gonna cover my entire buttcheeks or just kinda rest … mid-ass?

But this misunderstanding is necessary to enable Finley to have the expectation that Sophie would have time today to give her a ride to pick up her new car from Carmax, where the Love Your Car Guarantee helps you find a car that truly fits your life! Finley’s passive-aggressively irritated that Sophie’s unable to be her personal chauffeur, so much so that Sophie immediately concedes, offering to skip the retreat so she can give Finley a ride. This is relatable to me ’cause it’s the kind of offer I regularly made when I was being codependent in a toxic relationship! I was so terrified of failing to provide my partner the assistance they expected to succeed / get what they wanted, that I’d give up literally anything to avoid letting them down. But that’s not the type of relationship Sophie and Finley are in! This is not their dynamic! What the hell is happening?

I mean sure, $3,239 is a lot to pay for a jumpsuit but it’s Christmas and you love me and there’s only one left in this size, Soph

Finley’s like, no you don’t have to do that. I’m not sure what’s going on here but I hope Carmax didn’t pay too much for this product placement.

“Enjoy your trip,” says Finley coldly, exiting the room. Who are these people??

We jet back to Chez Alice, where Shane insists she was gonna clean but then she got so busy sitting in a chair, drinking everybody’s favorite vodka brand, “Vodka,” and watching girls scissor, that she lost track of time. But she’s sorry and will immediately decamp for a hotel!

Alice, dutifully cleaning up the mess while declaring her friend a mess, has no interest in this offer: Shane’s coming on her work retreat and doing ayahuasca in the desert with her co-workers. Don’t worry, Alice exposits, Ivy’s somehow moved to New York so she won’t be participating in this trip or the trip within a trip.

And then, after rolling eastward across this great nation via desert b-roll, we arrive at the work retreat, where organic humans in beige greet Alice’s luxury van of employees with green juice and a honk of cleansing spritz to the face. 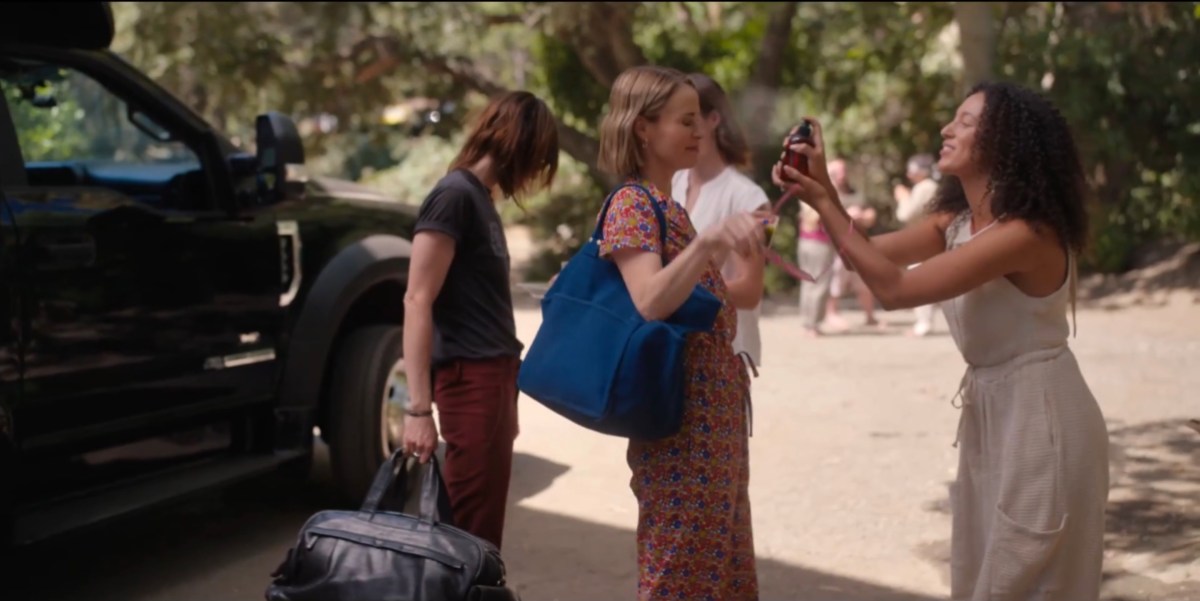 Sophie’s stressed and distracted ’cause Finley’s ignoring her calls and she thinks maybe she should just go home and deal with it? This is bananas.

“We are here to do team building and drugs! You’re staying,” Alice insists.

Shane puts her arm around Sophie and leans in: “Do it for the drugs.”

I mean it’s green juice you know? Like how hard is it to mix together a cup of tightly packed kale, four stalks celery, 1.5 pears cut into large pieces, one piece of fresh ginger and half a lemon (zest and pith removed)?

Alice gives an inspirational speech to her team and says she’ll see them on the other side.

“People will never be replaced by machines. In the end, life and business are about human connections. And computers are about trying to murder you in a lake. And to me? The choice is easy.”

Throughout this moment of communal cheer, Shane’s off to the side, leaning on a tree like Jordan Fucking Catalano. The Original Series Shane vibes here are so thick: the lazy gait, her whole outfit, the sunglasses, the permanent hangover, the devil-may-care “sure, stab me in the face, whatever” attitude? I love it! I missed this reclining chaos demon!

And also, her frank insight:

Shane: “No one thinks this retreat is about work.”
Alice: “What is it about?”
Shane: “You.”

Within a pillow-dappled yurt, Mercury addresses the group from her self-appointed position as a spiritual leader. They are here with one simple purpose: to open their mind’s eye to the universe’s life force energy!

My name is Mercury and I identify as your daddy

Ooo this is more fun than I was expecting

Mercury guides them in some brief deep breathing before distributing mini-clipboards upon which they are instructed to write down their Question for the Universe. Unfortunately, nobody draws a picture of a little bird sitting on top of a cake. Sophie’s fidgeting. Shane’s skeptical. Alice is, of course, very open to what the universe will bring her.

So it’s Alice who we focus upon first: her thought process is conveyed to us visually through a video montage of her Gen Q relationships, set to a voiceover replaying last week’s convo she had with Shane about nobody being “right.” Here’s what Alice writes on her baby clipboard:

HAHA JUST KIDDING here’s what Alice wrote on her clipboard:

Next we come to Shane. As she ponders her question for the universe, we’re treated to a little montage of her making out with people across all three seasons of Gen Q, accompanied by a voiceover from Tess telling Shane she’s got a fucked up way of showing her love. Let’s see what Shane’s big Q is!

Hahahaa just kidding Shane already knows the answer to that one! (Yes) Here’s what Shane was really drawing:

Hahaha jk jk, this is the real one lol:

Because you’re a pyromaniac

Shane wants to know “Why do I blow shit up?” Obviously someone’s got Wax on the brain!

Next we come to Sophie, whose Thought Process Montage is absolutely unhinged, cutting from her riding the back of Finley’s bicycle from the bar to Mari saying they’re “toxic together,” followed by Finley yelling at Sophie to leave Dana’s. This is a villain edit if I ever saw one. I wonder what Sophie is wondering!

Just kidding this is Sophie’s question for the universe:

Haha sorry sorry actually she was writing this:

OOPS nope nope here’s the one, it’s this one, I found the one!! Congrats to me I solved the season.

Well now that everybody’s questions are out there in the universe, it’s time to drink some drug tea! Alice requests lemon or Splenda but Mercury simply smushes her fingers into Alice’s forehead, because when life doesn’t give you lemons or Splenda, you can’t make lemonade, you just have to butch up and drink your tea.

“Cheers queers,” Shane nods before knocking hers back and then they sit waiting for their lives to change. And then the room begins to spin, and things get wobbly and the camera filter gets a little gauzy, and Mercury’s banging on her drum and Shane says, “Oh, please don’t let this turn into a musical” and then, my friends, it does!