A few things are certain about Christmas, to me. One is that it will start earlier and earlier every year, with big box stores starting their marketing for the holiday as soon as they feel they can get away with it. Two, that inevitably the onslaught of holiday movies will begin, bringing with it a slew of Netflix movies and impassioned defenses of Love, Actually. Maybe I’m just a Grinch, but I find that they can become a little much, these holiday films, going a little too hard on the Christmas of it all can make the whole viewing experience feel not all that dissimilar to hearing “Last Christmas” over the loudspeakers of a CVS when you’re just trying to grab toothpaste.

So I’ve started keeping a list of movies that are Technically Christmas movies, but not actually Christmas movies. These are movies that include Christmas, sometimes even as a major part of the plot, but aren’t necessarily “about” Christmas. There’s something nice (and realistic) about that to me, in the way that many parts of the holiday season (visits to family, NOT visiting family, singledom, life partners, travel) always brings up all sorts of emotions, but aren’t necessarily the whole story. I think of these movies as a fireplace with stockings hung on them, rather than a Christmas tree in the center of the room. 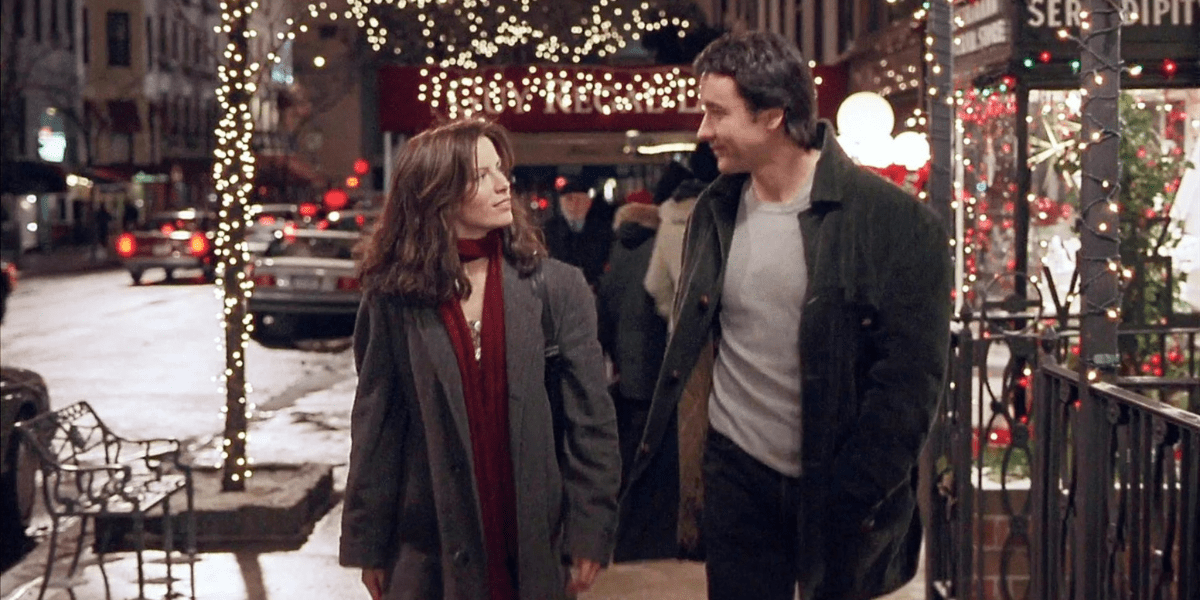 Before I’d ever seen a Hallmark Christmas movie, there was this movie which begins with a meet-cute at a department store while Christmas shopping and ends (sorry spoilers incoming!) on the ice-skating rink at Rockefeller Center. It’s literally named after the store that got famous for hot chocolate! It’s cozy and lovely and totally unhinged, a progenitor of whatever Christmas film Netflix has just released. 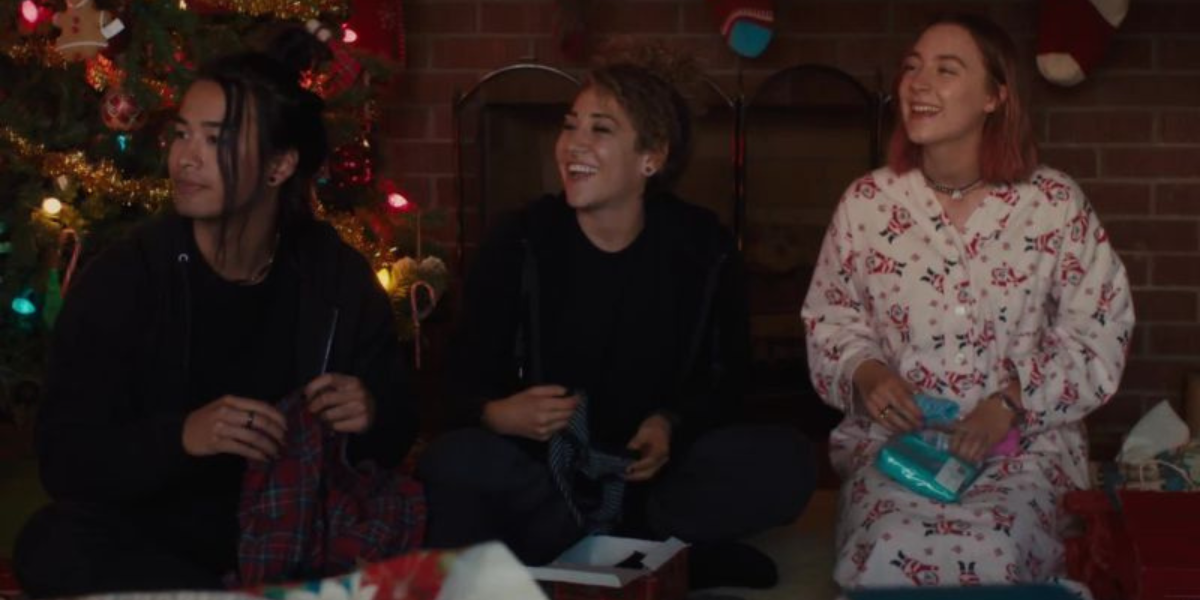 Okay, this one stretches the limits of the designation because it takes place roughly over the year of Lady Bird’s life (and honestly has more summer vibes), but I had to include it because of the scene at Christmas when the family exchanges small, inexpensive gifts because they can’t afford much more. Lady Bird’s mom, Marion (played heartbreakingly well by Laurie Metcalf) joyfully saying “It makes me laugh” about a needlepoint pun on a pillow brings a tear to my eye every time I see it! 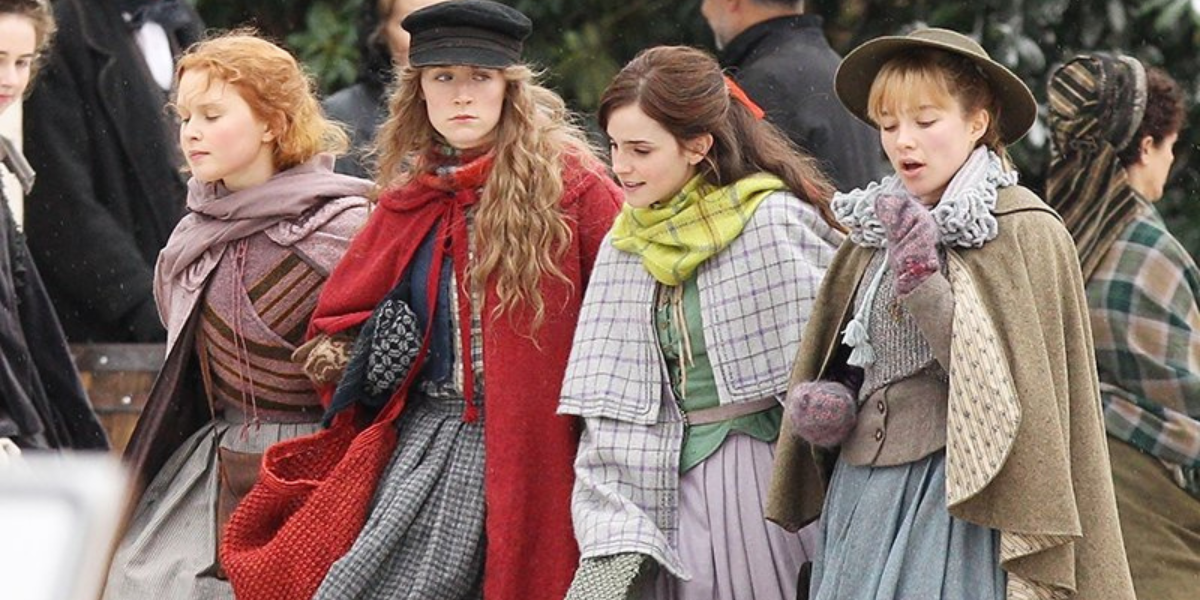 Like its sister, Lady Bird (both were directed by Greta Gerwig, they are sisters!), this movie unfolds over a long span of time but the Christmas portions are some of the most heartwarming bits, and Saoirse Ronan’s smiling “Merry Christmas, world” is enough.

Watching Lady Bird on a Friday night, as one who wants to induce a cathartic cry does, and am upset anew that Laurie Metcalf did not receive an Oscar for her delivery of “Makes me laugh” alone

While You Were Sleeping 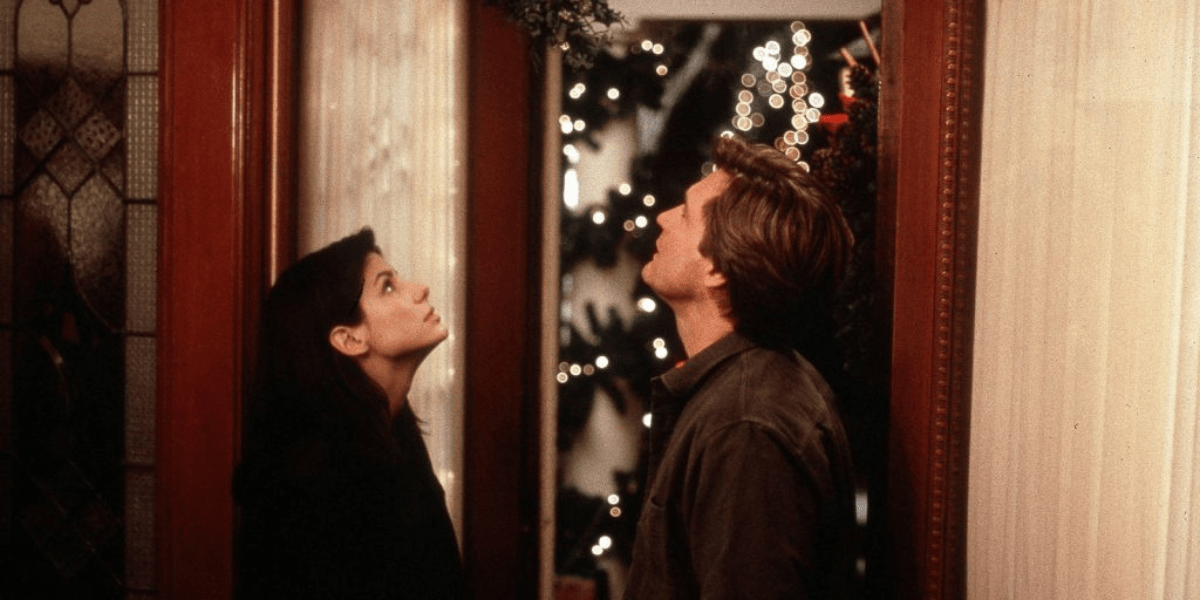 This movie, in which Sandra Bullock pretends to be Peter Gallagher’s fiancee after saving him from a train (he’s in a coma) and then falls in love with his brother in the process, all begins on Christmas Day, when Peter Gallagher’s character (also named Peter!) is pushed onto the train tracks by muggers. Classic scenario! 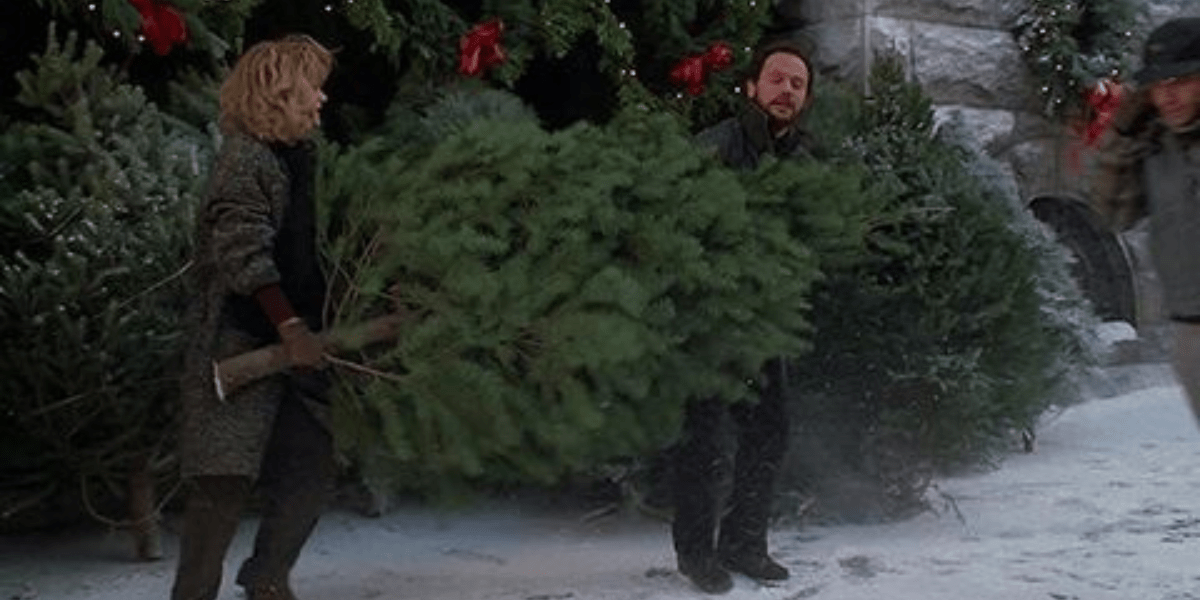 I agree, I agree, this is the superior New Years film! However, like many films on this list that include New Years (the holidays are only a week apart!), it also includes Christmas. The juxtaposition of Sally Albright lugging her own Christmas tree home just a year after she and Harry purchased one together as friends? Quietly devastating! A perfect film to watch around Christmas time if the holiday gets you down and you want to turn that into optimism. 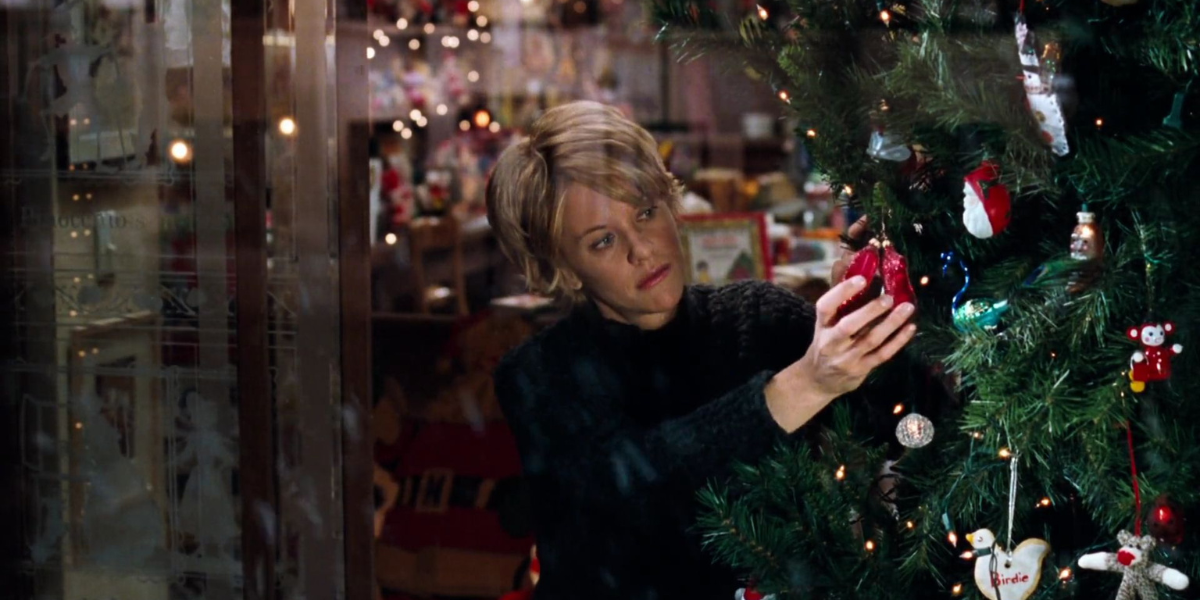 Before Vanessa Hudgens ruled Netflix, I think Meg Ryan was the queen of not just romantic comedies but HOLIDAY romantic comedies. This one also spans about a year (a little less) but the romantic climax begins right around Christmas time (I try to watch this every year right around November to get in the mood). 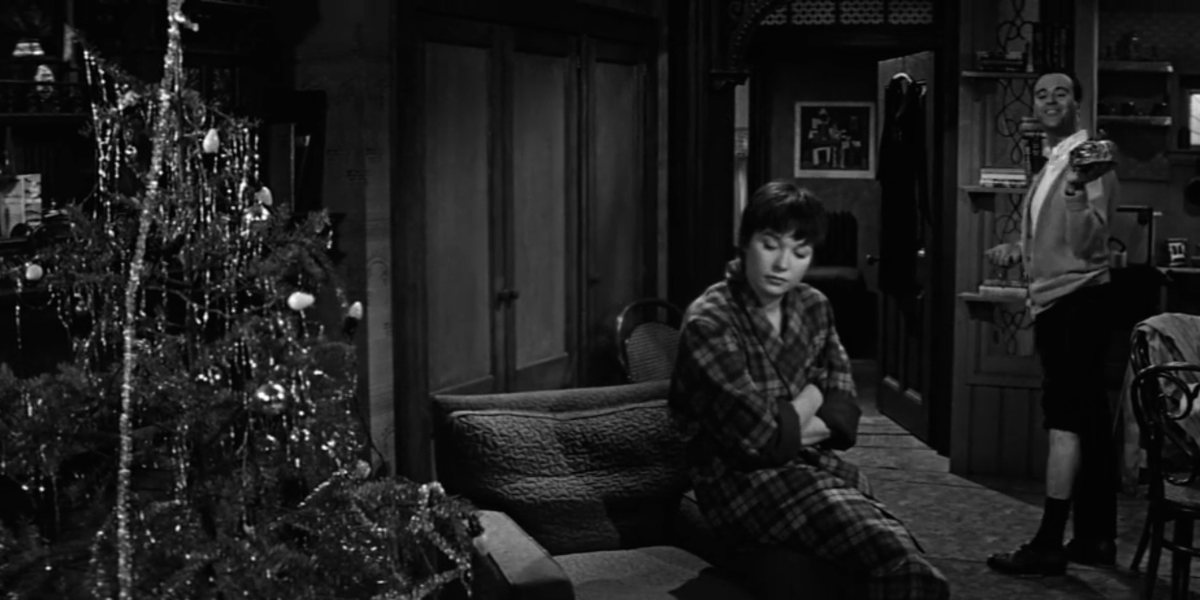 The acclaimed romantic comedy starring Jack Lemmon and Shirley MacLaine, which I watched for the first time this year as part of my rom-com viewing project, takes place at the end of December, and is another arguable New Years film, but an office Christmas party and talks of the emotional significance of Christmas fruitcake place it solidly on the Christmas list. 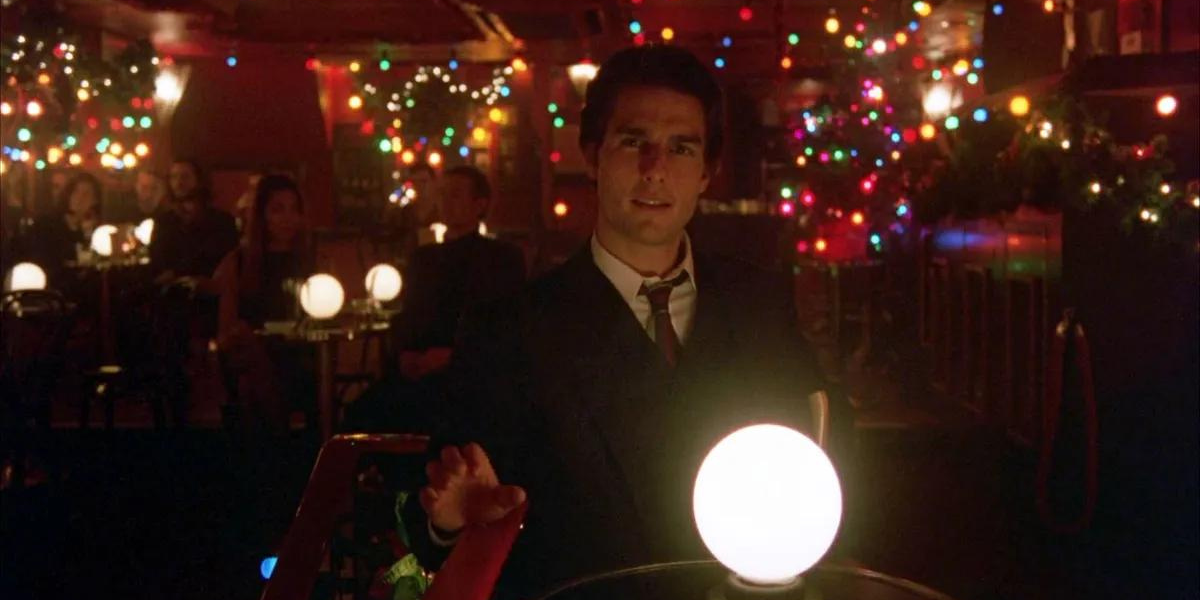 If romcoms aren’t your thing, here’s where the list takes a turn! Eyes Wide Shut follows Tom Cruise on a wild night through New York where he attends a masked sex party filled with members of the city’s ruling class. The adventure is bookended by Christmas festivities, beginning with a Christmas party of a coworker and ending with Christmas shopping in a toy store, and there are tons of Christmas lights in the streets as Tom runs around the city! 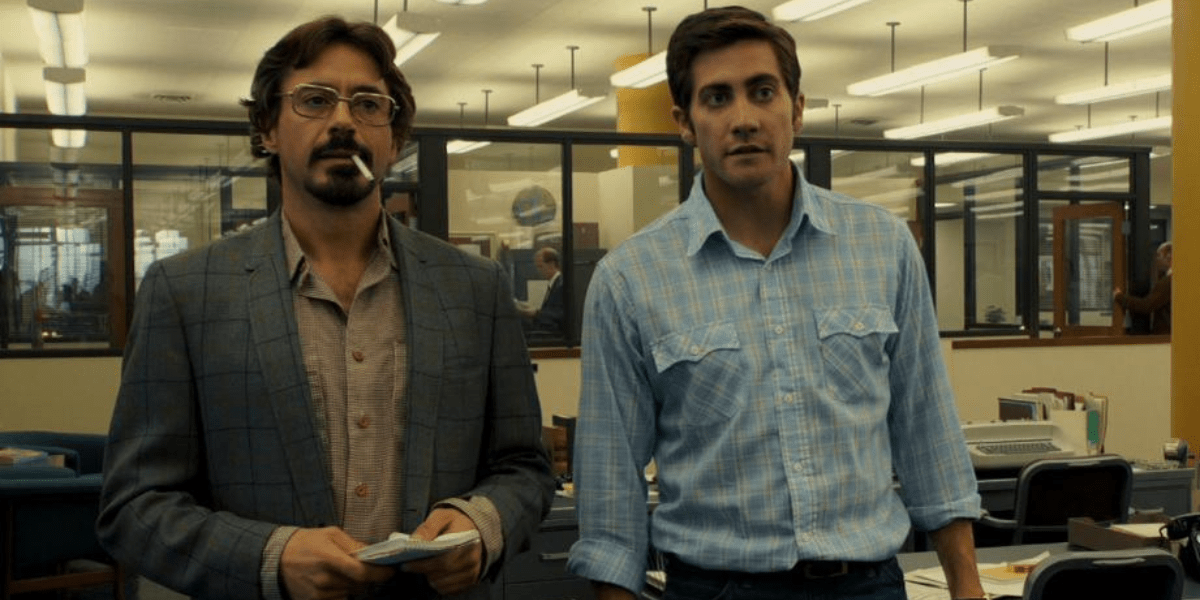 Because David Fincher made this film, the movie chronicling the hunt for the Zodiac Killer has a very blue, gray, green color palette, perfect for a dreary winter day. A break in the case comes from the handwriting in a Christmas card, making this a tenuous entry on the list, but one for the less celebratory among us! 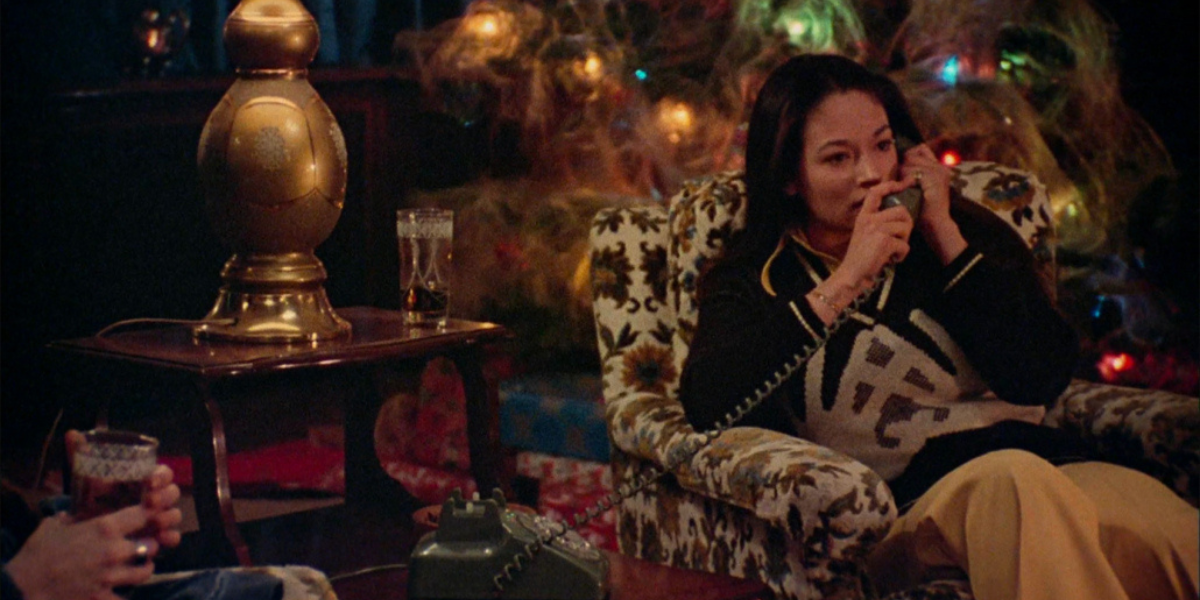 Another film that may be more of a New Years movie, except that it’s been certified as a Christmas movie by its very own director! Cronos is the debut feature of director Guillermo del Toro. When an antique dealer finds a device that gives eternal life in his antique shop, he becomes immortal with one catch: he now has a taste for human blood. Murder, fights, drugs, all abound! ‘Tis the season! 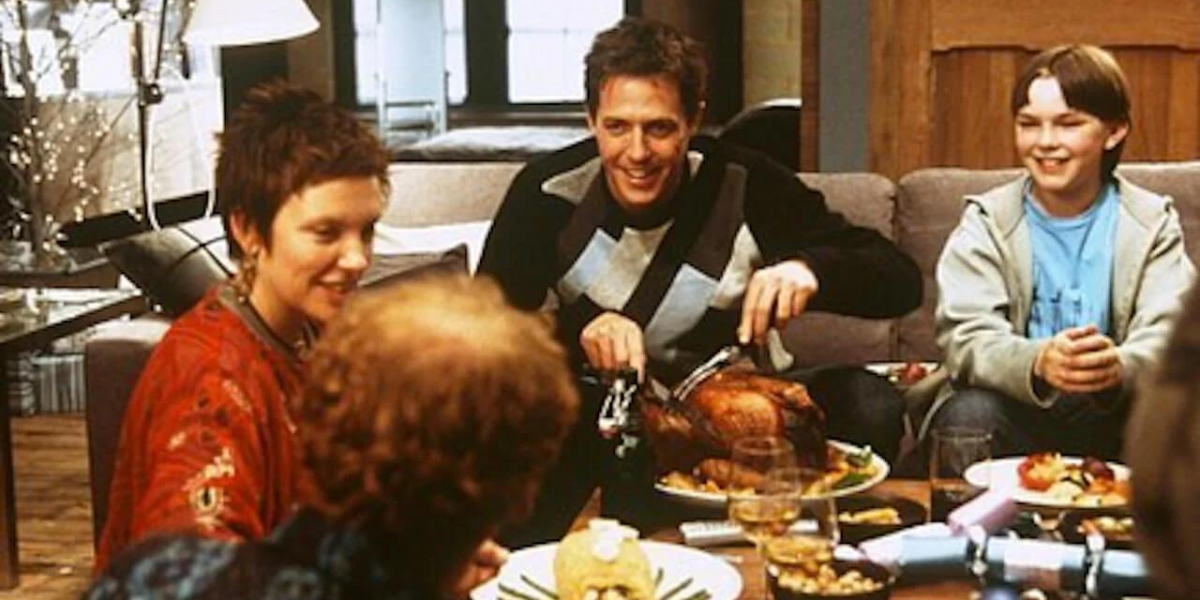 Less a comedy and more a wry romantic drama, About a Boy follows Hugh Grant, whose character lives a comfortable playboy lifestyle due to royalties from a Christmas song, as he befriends a young boy and becomes integrated into his and his mother’s lives. They spend a Christmas Day together, one of the first holidays that Hugh’s bachelor character has spent with loved ones in a long while. It’s quite dark for a romcom, with suicide attempts, fake children and a lot of sleeping around, but eventually heartwarming. What family doesn’t have their issues, you know?

Harry Potter and the Sorcerer’s Stone

If you still watch the Harry Potter films (hopefully because you own them on DVD from a long while ago), you probably know that many of them contain a Christmas scene, but the childhood wonder of Harry spending his first happy Christmas at Hogwarts makes this one the standout.

RENT and Spotlight have also been suggested as additions to the list by friends of mine, and I’m always on the search for more. If you have a not-Christmas Christmas movie to add, please let me know!