“List your six favorite films from 1978!”
“Top nine movie musicals!”
“Five movies that made you gay!”

Usually these prompts are just an excuse to to share some movies you love while giving the original poster the retweets they crave. But that last prompt, suggested by Louis Peitzman, was special. It’s how I learned about Kayla Kumari Upadhyaya‘s Grease-themed birthday party. 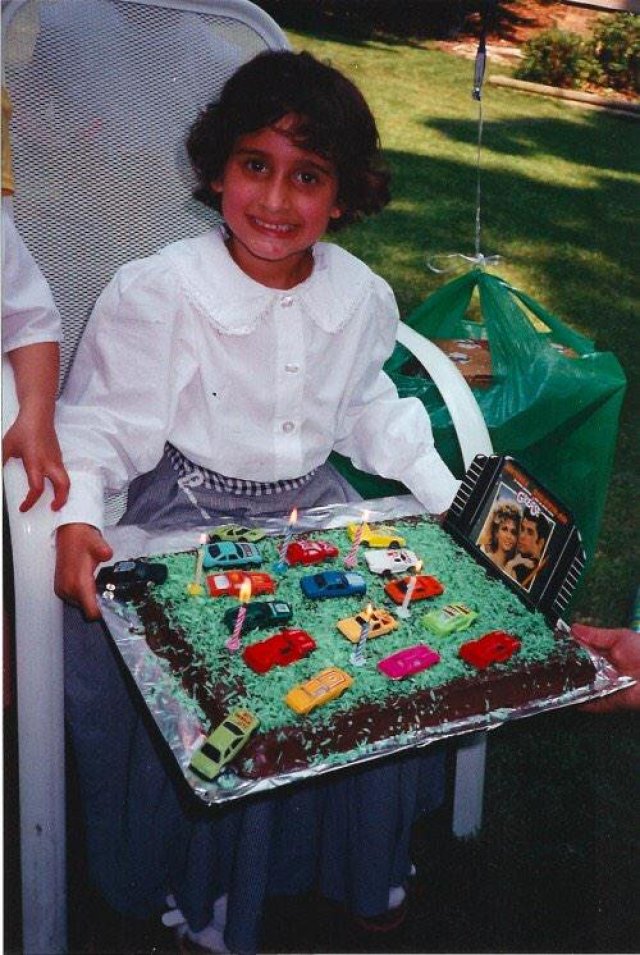 The revelation that Kayla and I were both obsessed with Grease as children demanded further discussion. What was it about this ostensibly heterosexual movie that so consumed our young gay lives?

Kayla: The first time I saw Grease, I was five years old. We were at my aunt and uncle’s house in D.C., and the adults wanted to stay up late gabbing, and I didn’t want to go to sleep. So they set me in front of a TV and popped a Grease VHS in. I don’t think they knew what they were doing. Because after that night, Grease became my whole world. I have a long history of deep, steadfast, all-consuming pop cultural obsession, and it all started with Grease.

Here’s a quick list of the forms that obsession took early on:

Drew: I think those are the gayest six things I’ve ever read.

Kayla: I think my parents thought it was “just a phase” but it surely WAS NOT. I was so young that it’s difficult for me to recall exactly how I felt when I watched it the first time, but I know I latched onto a few things in particular right away: the cheerleading uniforms, the leather jackets, the dance competition, Sandy’s transformation at the end, all the music.

Drew: My love of Grease pre-dates my earliest memories. I’m sure I discovered it through my older sister who danced and liked musicals and has always been drawn to anything with clearly defined gender roles. I don’t actually remember the first time I saw it, but it’s featured in some of my earliest memories. My family moved when I was five and I remember that first house by remembering Grease, watching it on VHS, dancing around the living room, pretending the coffee table was Grease Lightning.

My obsession did not last long. By 3rd grade or so, Grease had become an anecdote, a fun fact about me, rather than a current interest. I’d share that as a child I was obsessed with the musical, the way at 18 I’d share that I had a tattoo. It was something that shifted people’s perception of me in a way I enjoyed. I think throughout my childhood and adolescence I was swinging aggressively back and forth between trying desperately to prove I was a normal boy and wanting to be seen as the queer weirdo hidden underneath. There was something about my love of Grease I didn’t understand so it felt like a safe hint to disclose.

Ages 3 – 7, I was such a rule follower. I never misbehaved with my parents and once in school I had perfect attendance. I also played a wide variety of sports and generally just fit the mold I was supposed to fit. During this time my love of Grease really was the only weird thing about me, so it always stuck out to me, and to other people, as this random complication in the narrative of my identity.

As a fellow goody two-shoes, Sandy is the explanation for my obsession. I was inspired by her evolution even at such a young age. But I responded to this attraction by desperately trying to be Danny.

Drew: What were you like as a person during your Grease years?

Kayla: During the height of my Grease years, I was a musical theater geek and nerd who loved school. I felt immediately seen by Sandy in that she was this goody two shoes with a secret urge to rebel. Her incredulous “You making fun of me, Riz?” at the sleepover is a Mood. In middle school, I was the somewhat clueless nerd of my friend group who didn’t understand any of the sex jokes, and I definitely would have gotten “ill from one cigarette.” Sandy’s somewhat awkward attempts at being Cool and Bad at the end of the movie are also extremely me.

But my obsession with Sandy also had an underlying complicated edge to it because she’s such a paragon of whiteness. The only time in my life I wished for blonde hair was at the height of my Grease obsession. Now everytime I watch, I wish so badly that I was a Rizzo, which omg I just realized is still very Sandy of me!!!!! Cha-Cha and Frenchy are also two very underrated characters.

Drew: Looking back on the media I consumed during my childhood and adolescence, I would often get really attached to emulating the male character in a straight romance even though I was obviously relating to the woman. Jane Campion’s John Keats biopic Bright Star sort of changed my life when I was 14 (I also have a pattern of all-consuming pop culture obsession) and I really thought of myself as Keats, this sensitive boy poet. But looking back I was so obviously relating to his stubborn and emotional lover, Fanny Brawne.

The same thing happened here. As a fellow goody two-shoes, Sandy is the explanation for my obsession. I was inspired by her evolution even at such a young age. But I responded to this attraction by desperately trying to be Danny.

An oft-told anecdote in my family, or at least oft-told until my coming out queered it, was when I begged my sister to make my hair look like Danny’s. Despite the movie literally being called Grease, and the opening animation sequence heavily featuring hair gel, I did not understand how he did it. I was very young and very gullible and my sister told me that if she put two dozen butterfly clips in my hair it would do the trick. I happily obliged. When my mom saw me, she told me to take them out, and informed me that this method would not work. I threw one of my rare tantrums, Bad Sandy already influencing my behavior.

I think for many years I was most similar to Frenchy, but now I openly relate to Sandy, good and bad, depending on the day. I don’t think it’s a coincidence that Grease was my first exposure to romantic love and I’ve spent most of my life being attracted to people who are edgier than me, hoping to absorb some of that rebellion. I’m a Capricorn who has mostly dated air signs after all.

If you look closely, Rizzo and Frenchy have as much of an impact on Sandy as Danny does. And honey let’s be real, trying on new personalities or looks erratically is extremely queer.

Kayla: Obviously I feel like we need to address the fact that a lot of the messaging in Grease is, uhhh, not great. Sandy essentially changes her entire look and personality for a man because her sweet, soft femininity is seen as unattractive. But HEAR ME OUT, what if Sandy goes from Good Sandy to Bad Sandy not because of Danny at all but because she’s finally coming into her own identity and sexuality and has never felt like she had permission to be her authentic self before now?

If you look closely, Rizzo and Frenchy have as much of an impact on Sandy as Danny does. And honey let’s be real, trying on new personalities or looks erratically is extremely queer. And I love what you said about relating to Sandy by being good and bad, depending on the day. This really is a movie about extremities, which feels very camp.

Drew: I agree with you completely! In high school, when I was first discovering feminism (lol), I’d often rant about the messaging in the movies I grew up with. My main target was The Little Mermaid but I’m sure I brought up Grease.

Then as I got older, especially once I came out, I really started to appreciate these stories of transformation. I’ve regularly changed things about myself because of crushes and relationships, but I wasn’t changing for them. They were just an excuse. You’re right. It gives her, me, all of us, permission to be who we want to be. Or at least who we want to be in the moment.

I also love Rizzo and how unapologetic she is in herself and her sexuality. Her character is possibly the only example of sex positivity I had until I started watching European art films. I really love this essay by Mara Wilson where she writes about Rizzo’s effect on her. She also suggests Sandy helped Rizzo get an abortion, a theory I like a lot. As a kid, Rizzo scared me, but I don’t think it’s a coincidence my Grease obsession gave way to a crush on someone who bullied me.

That said the movie is not morally perfect. Obviously. The whiteness as you mentioned, and with that an overwhelming 1950s nostalgia that can be pretty gross. Revisiting it now I was also fascinated by the T-Birds. Danny and Kinickie are bad, but their buddies are the worst. They encapsulate everything about boys and men I was horrified by growing up and why so often I chose to have female friends. It’s interesting to me that watching Grease at a young age didn’t endear me to this behavior. At all.

Between the T-Birds and the Pink Ladies, the gender roles are very dramatic and exaggerated. So, I’m curious, why do you think we loved this movie so much as gay children? There’s something almost drag-like in the performance of gender. But I’m not sure I was clued into that at 4. Is it just about leather jackets? And Mrs. Murdock the dyke shop teacher? Or maybe Sandy’s transformation is a sort of coming out?

Kayla: Yeah, obviously now I’m able to recognize those extremities and camp elements, and maybe there was a subconscious attraction to that when we were young. I think I was drawn to the aesthetics and color scheme and how immersive it is visually. The red accents, the sheen of black leather, the pink jackets, the somewhat gauzy but still vibrant look of 1970s cinema. It just has such a specific Look that I really fell in love with. I do see the dichotomies of Good Sandy v. Bad Sandy as something specifically magnetic for little baby gays, too, even if we were too baby to fully unpack that.

As an endnote, I just need to share this story: In college, I was on a weekend trip in Chicago to visit friends and got very drunk. The person in charge of the music at the small party we were at asked everyone to queue up their Favorite Song Of All Time for the group to listen to. I put on “Hopelessly Devoted To You.”

I have no recollection of this. 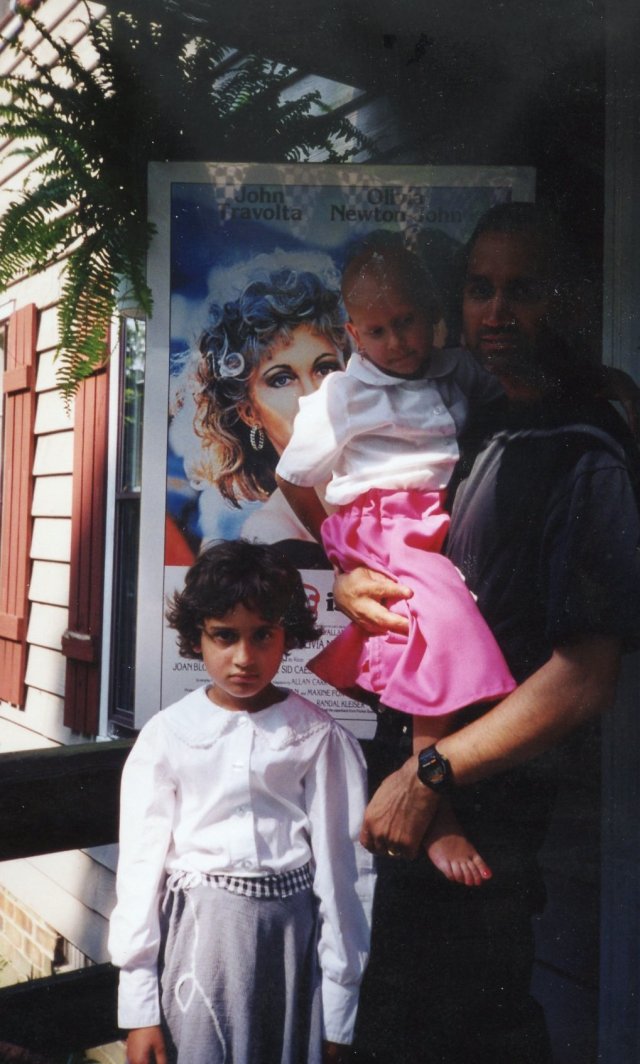