When all of America devotes 24 hours and approximately eighteen billion dollars to the vague, heart-shaped concept of LOVE LOVE LOVE, you know what that means for queers: it’s hard to shake the preoccupation with marriage, or our lack of access to it as a social institution. This Valentine’s Day turned out to be a big one for marriage equality! There’s good and bad news, and we’re starting with the good. 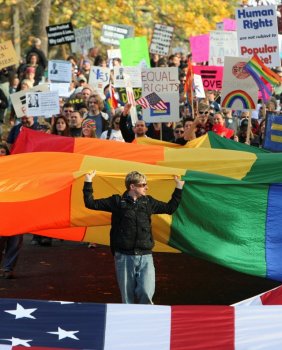 Back in 1998, gays of Washington state had the worst Valentine’s Day ever: the Defense of Marriage Act was passed, restricting the right of same-sex couples to marry on the very day that enshrines the desire to be in a monogamous relationship as the highest aspiration of any well-developed human being. But this year, on the same day, Democratic lawmakers in Washington have introduced legislation to officially legalize marriage for gay couples.

“We’ve made tremendous progress since 1998,” [Senator Ed Murray] said. “Gay and lesbian families in Washington now enjoy the same state spousal rights that their married straight friends enjoy – except for the name ‘marriage’. The recognition that their loving, lifelong commitment is no different from the loving, lifelong commitment of straight couples is the final step to achieving full equality. I believe the Legislature and the public are both ready to take that final step.”

In a move which we alluded to on Sunday, the British government has announced it will move towards full marriage equality. Right now civil partnerships are legally equal, but are mandated to be entirely secular. In the future, churches will not be required to administer religious ceremonies of marriage to gay couples, but will be given the option; Quakers and some Jewish sects have already confirmed that they will offer such rites.

Last but not least, this grandmother from Iowa thinks that it’s about time for gay marriage to be a thing, and she wants to tell you all about it.

Of course, there can’t be all good news; but what news isn’t celebratory is at least inspiring. In parts of the country where marriage equality isn’t a reality, hundreds of queers took the opportunity to take a day celebrating love and remind America that not all of us are afforded that opportunity. Gay people crowded county clerk’s offices all across the country, especially California and San Francisco, demanding marriage licenses that they knew they wouldn’t be allowed. Even in Norfolk, Virginia, which is far from a liberal bastion of pro-equality sentiment, couples walked into the clerk’s office in quietly inspiring acts of defiance.

“We’ve been together for 30 years, 30 years in a monogamous loving relationship,” Garland Tillery proclaimed…

“Hi, we would like to get a marriage license,” Tillery said to the clerk.

She replied, “And I have to apologize, I can not give you a license today.”

In Chicago, six gay activists were arrested when they refused to leave the clerk’s office without the license they demanded.

Judy Heithmar and Danelle Wylder sought the license at the marriage bureau in the Richard J. Daley Center in downtown Chicago. They were arrested along with Cassandra Avenatti, Lindsey Dietzler, Corrine Mina, and Noa Francis Shayden, said Andrea Crain, a spokeswoman for their group.

Protestors at the marriage bureau took turns reading out loud from a list of more than 1000 rights that straight people enjoy but that same-sex copules who can’t legally marry are denied. 60 more people demonstrated outside the Holy Name Cathedral, seat of the Archdiocese of Catholicism.

Is Valentine’s Day a consumerist made-up holiday? Yes, mostly. But activism works by making something out of nothing, and this year a lot of committed people succeeded in making a national ruckus over love – and isn’t that something to celebrate?