The first time I saw CREEP, it was the kickoff to Pride weekend at the Brooklyn Knitting Factory in June and they were opening for JD Samson’s new project, MEN. I don’t think I’ve ever seen a crowd react with the same amount of enthusiasm for the opening band as the headliners. [Watch video].

CREEP is a two-piece of synth-heavy, dubsteppy shoegaze featuring Lauren Dillard and Lauren Flax. They set a tone for a show that had a vibe that I don’t think I’ll ever forget, thanks to the head-spinning combination of CREEP’s space-age heavy brooding and MEN’s manic political-pop optimism. 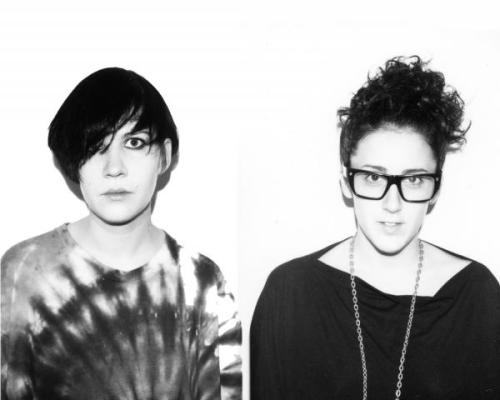 CREEP has very suddenly exploded into relevance. Two gangly hipster Brooklyn musicians, both have been on the party circuit for a long time, DJing and dressing well and blogging and making art. CREEP officially started about a year and a half ago as a side project with Melissa Laudvais of Telepathe. When Melissa left to record her own second record, Lauren Dillard explains to Autostraddle, “Flax and I kicked CREEP into high gear and haven’t stopped since- it’s like a musical marriage.” She adds, “We have known each other for years and our paths collided at the exact right time.” It was one of those perfect, cosmic, creative connections.

Suddenly, collaborations with Romy from The XX are happening, and many more to come. Dillard tells me that a collaboration with Kazu from Blonde Redhead is in the works, as well as a US tour with The Klaxons. The sudden attention isn’t surprising. They’re certainly nodding to the already existing genre of Goth, but they’re bringing something to the table that no one has ever seen quite like this before.

Their visual aesthetic is an essential part of this. It’s dark, with the aforementioned hoods and black-glitter face paint. Their live show was intense to behold mostly because to match their sonic palate, they relate images. Eerie art-film images streamed on a screen behind them as they hunched and played. This is also displayed in the video “Days,” where what you see seems to perfectly match what you hear and it’s all stars, creepy dark rooms, long black hair, tricks of purple and green light, and the girls in their cloaks. For Lauren, this is a priority. “Visuals are very important to us. We either make the videos we have for songs or collaborate with friends.” Warren Fischer of Fisherspooner made the music video for “Days.” “It was a dream come true- he is a visionary.”

The reason CREEP are cutting edge is because they’re women in a genre still arguably dominated by men, they’re doing new things with the genre, they’re making an art project out of it all, and their work is very creatively communal, with constant collaborating being an enormous focus of the band. The results of these carefully chosen collaborations are working and the duo is really only getting started. There’s an album to come in 2011 and as Dillard says, despite all the darkness, “the future is bright.”