SERIOUSLY THE RENT IS REALLY HIGH:

You may recall that Autostraddle as an institution threw its support wholeheartedly behind Jimmy McMillan of the Rent Is Too Damn High Party for Governor of New York last year. This is what America needs. 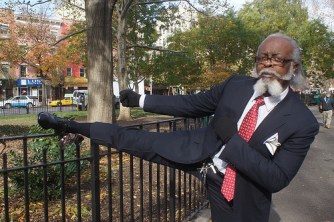 Jimmy McMillan’s thoughts on gay people were, at that time, “[Homosexuals] are normal human beings just like me and you they were just born different,” and on gay marriage specifically, “The Rent Is 2 Damn High Party feels if you want to marry a shoe, I’ll marry you.”

This week at CPAC, which is like New Year’s in Las Vegas for every conservative pundit and politician who so much as owns a tie clip, McMillan confirmed that he is a) a 2012 Presidential candidate and b) the only GOP candidate running who supports gay marriage.

Wearing his signature black gloves and handlebar mustache, McMillan stood in front of gay GOP group GOProud’s booth and reiterated his support for gay marriage, CBS News reported. He said he doesn’t want to know what other people do in their bedrooms “because I get freaky in my bedroom.”

“If you want to drop your pants, drop ’em, dog. I got your back,” McMillan said in response to a question about “personal liberties.”

Today the British Government announced that it has plans to change the current law around same-sex marriage and civil partnerships, and allow gay couples to perform marriage ceremonies inside places of worship. The Church of England has already said it won’t allow its buildings to be used for same-sex marriages, but other groups, including Quakers and Unitarians, are likely to step forward. Under current rules, same-sex unions in Britain must be entirely secular.

A bill in Nashville, TN that would extend protections to gay, lesbian and trans people against discrimination may be coming in the future. Mayor Karl Dean has said that if the bill can pass through the city council, he will sign it. The council bill would require city contractors to pledge not to discriminate based on sexual orientation or gender identity.

A 23-year-old student teacher who was fired from his post at an Oregon elementary school after letting his students know he was gay has settled with the school district for $75,000. “Stambaugh, who will graduate from Lewis & Clark College in the summer, says he’ll donate at least $10k to two youth-oriented local non-profits. The school will also “provide leadership training concerning issues related to sexual orientation, gender identity and gender expression,” according to the settlement details. ”

It’s never good when an incident of discrimination hurts someone, like the story of Christy M’s being kicked out of a Ross’s dressing room because the manager didn’t understand her gender identity, but it is good when for once it doesn’t end in a lawsuit and instead leads to the company voluntarily re-examining its policy. “The ACLU of Washington says that California-based Ross Dress for Less has clarified to employees that company policy prohibits discrimination against persons based on gender identity and expression, and that the Ross Stores was drafting policy including a “special instruction” to employees on accommodating customers’ gender identities for use of the bathroom and dressing rooms.”

Maybe you’re one of those people who got over Hanson when you were fourteen. If so, I have nothing to say to you. But Hanson does, in this video, and I would suggest you listen, because honestly what the hell is wrong with you.