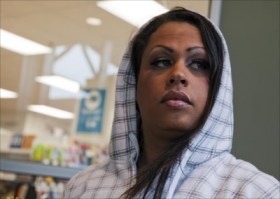 Chris, via the Chronicle Herald

Chris Cochrane, a Halifax trans woman and well-known performer under the name Elle Noir, was shot in the arm at her apartment early Tuesday morning by two men claiming to be police officers and allegedly shouting transphobic and homophobic slurs.

According to the Halifax Regional Police, two men showed up at Cochrane’s apartment building at 1:30 a.m. Tuesday, knocked on the door, and identified themselves as police officers. She opened the door, but when she saw that one man was carrying a gun, she tried to close it. Shots were fired, including one that went through the closed door and hit her right arm.

After surgery, Cochrane spent Tuesday night in the hospital. In an interview with the CBC on Wednesday, she said that she believes the attack was a hate crime:

“They were yelling, ‘Tranny faggot, open the door, let us in, let us in,’ which leads me to believe they knew who I was. I’m in a second-floor apartment. You know, you have to have a security key to get into the building.

In the audio of the same interview, Cochrane says:

Police, however, are reluctant to call the incident a hate crime. Constable Brian Palmeter, a Halifax police spokesperson, told the Chronicle Herald,

“There’s no doubt if a derogatory statement is made, it’s unpleasant, it’s distasteful. But … you have to look at the motivation behind the incident. Certainly at this point, we are exploring the possibility that there are other motivating factors behind this incident . . . Certainly at this point, based on the information that we have, we don’t believe this is a hate crime.”

While Cochrane admits that her neighborhood is sketchy, she insists that she is not involved in any way with illegal drugs or activities.

According to the Criminal Code of Canada, a person can be convicted of a hate crime only with very specific proof that the motivation behind the criminal act was to harm or terrify an identifiable group based on colour, race, religion, ethnic origin or sexual orientation. While the events that Cochrane describes suggest that her attackers were targeting her specifically for her gender identity and sexual orientation, it’s possible that the police don’t feel they have enough evidence yet to charge and successfully convict the perpetrators of a hate crime under the Code.

Also they haven’t caught them yet.

One section of the Code, though, stipulates that “a sentence should be increased or reduced to account for any relevant aggravating or mitigating circumstances relating to the offence . . . motivated by bias, prejudice or hate based on race, national or ethnic origin, language, colour, religion, sex, age, mental or physical disability, sexual orientation, or any other similar factor.” Which could mean, at least, that the attackers’ slurs could increase the severity of their eventual sentencing.

According to a report by Statistics Canada last week, reports of hate crimes motivated by sexual orientation increased by 18% in 2009, and were more likely to include violence. An estimated 75% of hate crimes go unreported. Helen Kennedy, a spokesperson for Egale Canada, said that while the increase is likely in part due to people reporting incidents more frequently, there is still a problem:

“Reports of incidents have gone up and I think that’s directly related to some of the training we’re doing with the police and to engage the community to try and encourage people to report these incidents. We’ve known for years and years that we have a big problem with violence against the LGBT community … and I don’t think the government can continue to sweep this under the carpet and say that we have great legislation in Canada to protect LGBT communities (when) the reality is that we’re not.”

It’s a tricky one to call: on the one hand it’s easy to assume that police reluctance to call this a hate crime is based in transphobia and a general history of cops not exactly being bffs with the trans community; on the other hand, holding off on classifying something as a hate crime without solid evidence may be wise, so as not to diminish the gravity of actual crimes motivated by hate.

Regardless of what the police determine, we’re glad that Cochrane is safe and surrounded by her community, and we wish her a speedy recovery.