As America is slowly coming to learn through carefully timed nuggets of popular culture like The Kids Are Alright and the later-in-life public coming out process of beloved mom figures like Meredith Baxter, lesbian moms exist. Much of the long, hit-and-miss history of the sociology of the American family and the particular brand of pop psychology that goes with it has been devoted to husband-and-wife dynamics – does it drive husbands to cheat if the pot roast you make for dinner is tough? Will your children grow up to be serial killers if you let them climb into your marital bed when they have nightmares? Which parent should do the disciplining, mom or dad? These questions get a lot more interesting when they’re applied to gay families, and that’s what we’re starting to see now. What will we see when we look into the mirror of sociological studies? Well, there’s good and bad news. 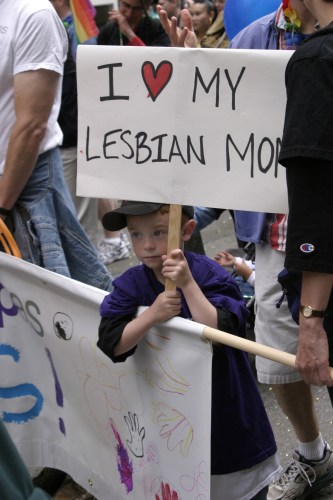 The good news is that lesbian couples are more likely to report an equal division of household labor between them. In heterosexual couples, this can be a huge problem – studies have shown time and time again that no matter how progressive and feminist and smart and supportive a husband is, it’s still very statistically likely that he does less than 50% of household chores, regardless of the division of labor outside the home between he and his wife. But the upshot of that is that most American women have developed a pretty insane skill set as far as balancing demanding jobs out of the home as well as the demanding job of doing all the work inside the home, on top of caring for a family. When both heads of the household are women, that’s a lot of skills being brought to bear.

The common thread was that women in lesbian relationships were doing what millions of heterosexual women do everyday – simultaneously managing the competing demands of work and family. Not only was there a more egalitarian sharing of household tasks,lesbian couples were much more likely than heterosexual couples to manage their work and family demands by both working part time.

The article makes a good point about how it can be beneficial to the family as a whole when either by choice or by necessity we abandon the gender-based roles that we’re usually asked to fulfill; unfortunately, there were not enough gay male households involved in the study to compare, but hopefully that’s something for the future.

Of the mothers in the study, 11 sought help openly from police, health providers, and domestic violence professionals. Six mothers sought help without revealing the violence because they felt ashamed of being abused by a woman partner”I thought a female-female relationship was supposed to be nurturing” and six others tried to solve the problem alone, mostly because they were closeted and had no support from friends and family.

Even more complicated is the custody issue. In many instances of abuse for heterosexual women, they worry that if they report the abuse, they’ll lose custody of their children, and it will perhaps be given over to the abuser. In cases of IPV between lesbians, the abuser isn’t always the biological parent – but there’s still reason to be concerned that the household in general will be deemed unsafe, and custody of children will be awarded to the biological parent (whom the victim may have cut out of her and her children’s lives) or to the state. It’s extremely possible that, especially in more socially conservative areas, a lesbian mom who reports her own abuse could be rewarded by having her children taken from her, regardless of her own fitness as a parent. The result is women who hide all signs of their abuse when they should be able to reach out to those around them for help.

One woman who sought help had no qualms about calling the police to remove the abuser from her property. At the same time, she hid the abuse from the father of her children. “My children are everything to me. He does make considerably more money than I do, and he’s remarried and . . . it’s like a perfect home life, a perfect situation. I just could not fathom if I lost them [the kids], let alone if I lost them because of the abuse. So I hid a lot from him,” she said.

Lesbian families have more recognition, both legally and culturally, than ever before. This means that we may enjoy more respect and less eye-rolling than we have in the past; but it does not, unfortunately, mean that any of the unique problems of being female, being gay, or being both are gone. But knowledge is power, and every day we’re gaining more. Onward and upward, sociology!