Last weekend I went to a show at the American Repertory Theater in Cambridge that was five hours long, but felt far shorter than my 40-minute high school health class, or either presidential debate. It’s called The Lily’s Revenge, it’s by Obie-winner Taylor Mac, and it’s kind of impossible to explain, but I’ll do my best! I’ll start by listing. I spent those five hours in the company of characters including (but not limited to) a heroic lily, Time Herself, a villainous curtain, an idealized groom in boxers and a necktie, a swingin’ four-piece daisy band, and literary theorist Susan Stewart. During the acts, I found myself thinking about the tyranny of nostalgia, the limits and joys of iambic pentameter, the surprisingly similar limits and joys of the marriage equality movement, and the unjust sidelining of baby’s breath by the bouquet industry. In between them, I got a lesson on digital communication from some drag queens, danced with an overly officious sunflower, had a haiku written for me by a stagehand, and watched some interns grill sausages in the alleyway behind the theater. You should go to this show, is what I’m getting at, and if you’re not convinced yet, have a look at these costumes, designed by Sarah Cubbage. 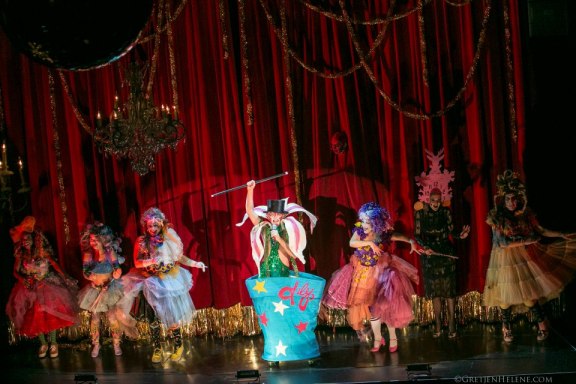 Whoa, right? If you’re still not convinced, I suppose I’ll try the more traditional review-route. A bare-stems plot summary of The Lily’s Revenge leaves out so much that it’s barely worth writing, but here goes: Two gods, The Great Longing (representing nostalgia) and Dirt (representing “the here and now”) are battling for the hearts and minds of humanity via the staging of a wedding; victory rests in the petals of our hero, the Lily, who is variously tempted by both sides over the show’s five acts. The queer bent of the show should be obvious from that summary (it’s obvious as soon as you walk in – I’m still exhaling glitter a week later). But Mac manages to break newer ground than I’d expected with his eventual message, which verges on the post-political, and the reasoning behind it, which borrows heavily from cultural criticism and the ethos of community theater rather than the historical, logical and legal arguments we’ve all heard a million times before. 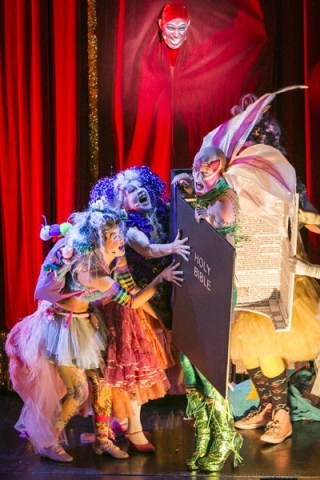 CONSIDER THE LILIES HOW THEY GROW: THEY TOIL NOT, THEY SPIN NOT, AND YET THEY ARE FABULOUS {VIA GRETJEN HELENE}

I’d be remiss as a reviewer if I failed to mention that the Lily’s temptations take the form of, among other things, a musical puppet show; a “dream ballet” that shows, through a mixture of pantomime, dance, and swirlies, the perils of monogamy; a panoramic short film about coming out in San Francisco; and a sexy haiku-off between seven different flowers, all played by local drag queens, and oh God I’m listing again. (And I’d be remiss as a friend if I didn’t point out that if you still, somehow, get bored, you can always turn your attention to the facial expressions of the unsuspecting older couples who got season tickets to the A.R.T. for Christmas, and came into the city to see a nice play about horticulture – it’s a show all on its own.) Each act is also staged differently, making great use of Oberon’s malleable space, and giving you a chance at better seating every time you re-enter.  Between the show itself, the sideshows, the healthy dose of audience participation, and the going in and out, the whole thing is basically a mostly-scripted party, like the best wedding you’ll go to all season. 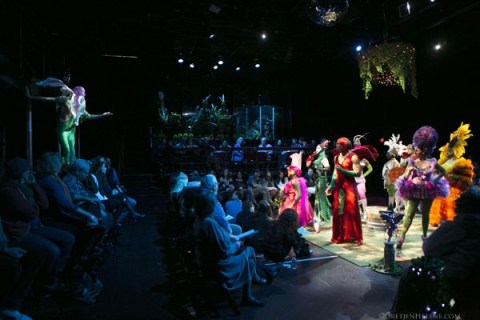 If all this seems dizzying, it is. And like anything that shoots this many arrows, it’s a little hit-or-miss – the show’s reliance on lesbian and drag stereotypes is particularly grating given its overall progressivism. But the excesses make sense when you think of them as mirroring the show’s main idea – there is so much out there; why restrict yourself? Try to kiss it all, or at least build a world in which everything has the freedom to, as Dirt puts it, pucker up. My main critique of the show mirrors my main critique of its message – when you allow yourself to sample everything equally, you lose your chance to dig deeper. But there’s plenty to dig, and plenty of time for digging, later – first, root down with this Lily for five hours and let yourself wave around. I’m glad I did. 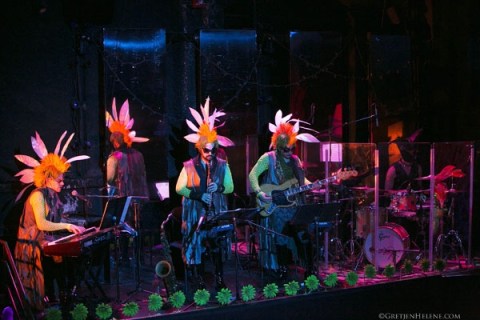 THE AFOREMENTIONED DAISY BAND TAKES US OUT {VIA GRETJEN HELENE}